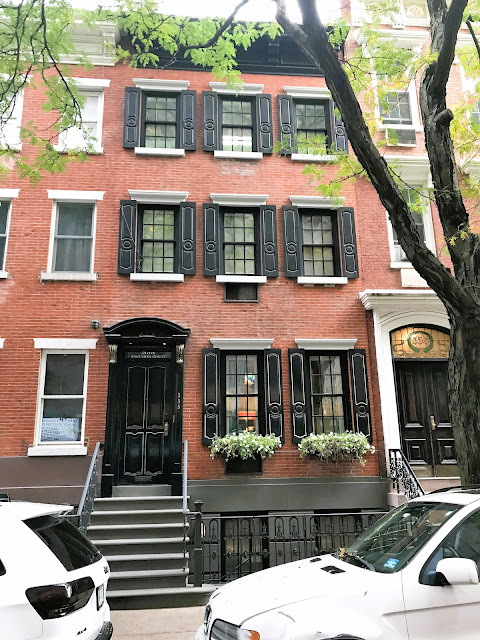 William H. Merrill, a jeweler at 17 John Street, occupied the three-story house at 253 West 19th Street as early as 1851.  He and his wife had two children, William, Jr. and Emma Louise.  The Italianate style house was one of a recently completed row.  Faced in red brick above a rusticated brownstone basement level, the scrolled brackets of its cornice were the latest in architectural fashion.

The Merrills' residency would be relatively short-lived.  In 1857 merchant John D. Abrams occupied the house.  He ran a business at 144 Front Street that catered to the ships arriving and leaving from the docks a block away.  Boarding with the Abrams family was a 22-year-old bachelor, Charles E. Bostwick, who was in the straw goods business.
The outbreak of Civil War changed everything for the occupants of the house.  Abrams and Bostwick joined the Union Army and neither would return to West 19th Street.
Charles was commissioned a captain and fought in the Battle of Port Hudson, which gave the Union control of the Mississippi River.  He was later made a colonel.  While in the Deep South, despite the ravages of war, he found love, and in 1863 married Katherine Douglas in New Orleans, Louisiana.  Following the war, in 1870 he moved his family to Minnesota.  In the meantime, John D. Abrams had died on August 12, 1862.
In 1863 the house became home to the Charles Scholey family, who would remain about a decade.  Scholey ran an ice company at 108 Seventh Avenue.
The address would be renumbered twice in the coming years.  In 1867 it became 353 West 19th Street, and in 1876 each of the addresses along the block shifted one plot west, making 353 become 355.
By 1873 the family of Charles William Ogden occupied the house.  Charles, who listed his profession as "shirts" at 78 Franklin Street, had an impressive American pedigree.  He was one of the eighth generation of Ogdens directly descended from Pilgrim John Ogden.  His father was Isaac Gouverneur Ogden and his mother was the former Margaret W. Dayton.  He had married Mary Armitage Bacon on June 6, 1855, and the couple had three children, Emily Bacon, Alice, and Charles Stuart.
On the night of February 6, 1891, the house was broken into.  But this was no ordinary burglary.  Hearing a noise, Charles Ogden went downstairs to investigate.  In the hallway of the parlor floor, he found a baby girl who was estimated to be about two weeks old.  It was common for unwed mothers, or simply women who were too poor to afford another baby, to abandon infants at the doors of affluent families, hoping for the best.  But this was the dead of winter and the mother, knowing that the child would perish quickly if left outside, had taken the daring act of breaking into the house.  The Evening Post reported, "He turned it over to the police."
Charles William Ogden died in the house on March 21, 1896 at the age of 72.  Surprisingly, his funeral was not held in the parlor, as was customary, but in St. Peter's Church, a block away.
Margaret leased the house three years later to Jonah and Jane White for $1,020 a year (an affordable $3,050 per month by 2022 conversion).   Jane experienced a horrifying incident on the afternoon of August 20, 1899.  On her way home, she was waiting for a streetcar on Eighth Avenue and 29th Street at around 3:30.  In broad daylight, according to The New York Times, she "was approached by three men, one of whom seized her around the neck and grabbed a diamond brooch, valued at $45, from her collar."  When Jane screamed, the man (later identified as John Dunn) "gave her a blow in the face with his fist and darted down the avenue."  Jane's cried for help attracted a crowd, who chased Dunn and caught him at 28th Street.  The thief was rescued from street justice by an officer.  The Sun reported, "The fellow was being roughly used by his captors when Policeman Strebel came up and arrested him."
At the turn of the last century, 355 West 19th Street was being operated as a boarding house, home to a wide variety of tenants.  One boarder found an inventive way to make money in 1903--mail order fortune telling.  He advertised, "Palmistry--Have your palm read by mail; accuracy and secrecy strictly observed.  Send your address for instructions to Palmist, 355 West 19th st, city."
A very modern young woman lived here around the same time.  In March 1904, Elizabeth Le Fevre was appointed a commissioner of deeds, a position similar to a notary public today, but one notably held almost exclusive by men.
French immigrant Emil Baud rented rooms here in 1910.  An aspiring sculptor, he was looking for work that year, advertising, "Frenchman, having some experience as sculptor, modeller, wants position."
By the end of World War I, the house was termed a tenement, meaning simply that multiple families lived here.  Its janitor was interviewed by "The Inquiring Reporter" of The Sun as election day approached in 1923.  He was asked if he approved of the $50 million bond issue for new buildings "for the insane and physically defective."  Fred Welnert's response was decisive.  "I consider this move the most important that faces the voters.  As it stands it is a shame and a disgrace the way the insane people are housed and treated." 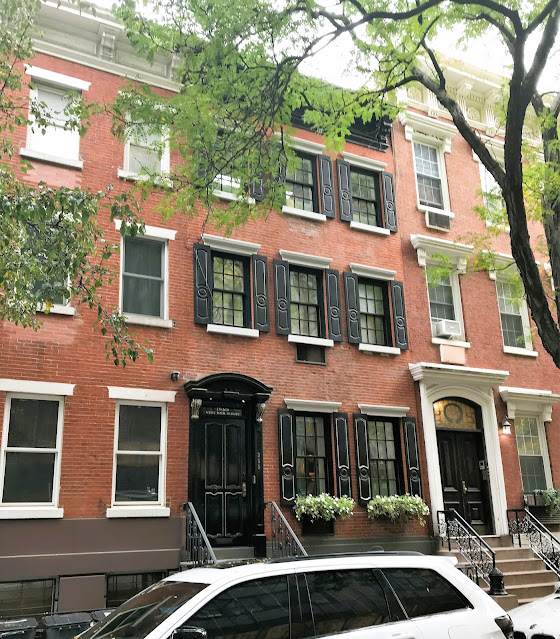 The house continued to offer rented rooms until a renovation, completed in 1967, resulted in a duplex apartment in the basement and parlor levels, and one apartment each on the upper floors.  A subsequent remodeling in 1998 returned it to a single family home.
photographs by the author
LaptrinhX.com has no authorization to reuse the content of this blog
Posted by Tom Miller at 1:00 AM