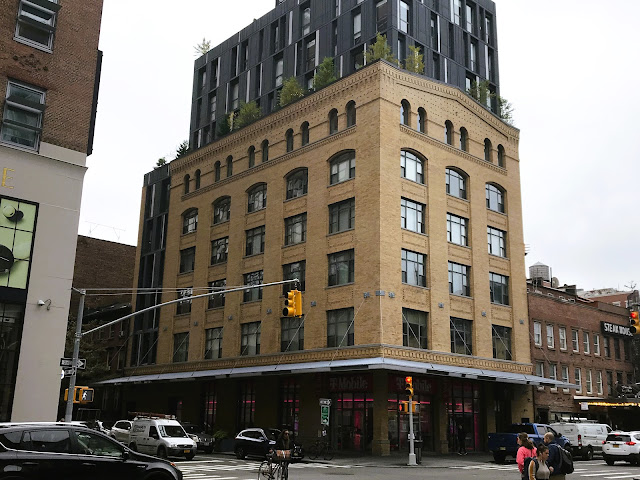 In November 1905, architect William A. Boring filed plans for a six-story brick and stone warehouse to be erected on the southeast corner of Ninth Avenue and 15th Street.  He had been hired by developer Mary A. Tuttle, who saw the potential in the site's location at the northern hem of the bustling Gansevoort Market area.  Completed in 1906, the structure was faced in yellow brick above the ground floor loading area.  A modern take on Romanesque Revival, the openings on the second through fifth floors were slightly recessed, creating the impression of four-story arches.  The decorations--paneled spandrels, a corbel table below the sixth floor, and complex dentiled cornice--were all executed in brick, a significant cost savings for Tuttle.  The paired windows of the sixth floor were arranged as an arcade, and the Ninth Avenue roofline rose in a gentle gable.

Mary A. Tuttle leased the building in May 1906 to German-born Julius Wile for a term of 20 years.  He was the principal in Julius Wile Sons & Co., importers of liquors and wines, which he founded in 1877.  Working with him were sons Alfons and Irwin.
While the firm occupied most of the building, it sublet two floors in October that year to the Austrian Bent Wood Furniture Company.  In 1914, upon the expiration of that lease, the Eureka Pneumatic Spray Co. rented the third floor.   The firm manufactured what The Metal Industry described in July 1915 as "a complete spraying outfit consisting of compressor, air tanks, gauge,, safety valve, tank draincock, air filter, one sprayer and a length of hose."  The gadget retailed for $33, or just under $1,000 in 2022. 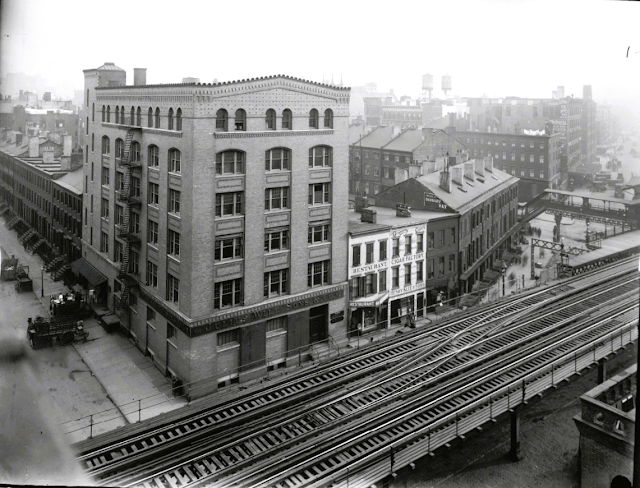 The Ninth Avenue elevated tracks ran in front of the building, which loomed above the 19th century structures around it.  The sign stretching the building's width above the first floor reads "Julius Wile Sons & Co."  photograph from the collection of the New-York Historical Society.
As America emerged from World War I, the Government turned its focus to an issue that would have enormous effect on Julius Wile Sons--Prohibition.  The 18th Amendment was ratified on January 16, 1919 and Prohibition was enacted on January 17 the following year.
The firm was permitted to carry on business on a limited basis.  A loophole in the National Prohibition Act allowed clergymen to use wine for sacramental services, food processors to use alcohol in preserved fruits, and doctors to prescribe liquor for medical reasons.  (For instance, when the future British Prime Minister, Winston Churchill, was in New York in 1932, Dr. Otto C. Pickhardt wrote a prescription, "This is to certify that the post-accident convalescence of the Hon. Winston S. Churchill necessitates the use of alcoholic spirits especially at meal times.  The quantity is naturally indefinite, but the minimum requirements would be 250 cubic centimeters.")
Liquor and wine firms like Julius Wile Sons & Co. were closely scrutinized, so when Daniel Murphy and Joseph Levine showed up in September 1920 with a permit to purchase 200 cases of whisky, the management was suspicious.  The New-York Tribune reported, "Weil's [sic] employees kept the men in the place and communicated with the authorities, who declared the permit a forgery."  The value of the liquor they attempted to buy would top $200,000 today.
The restricted amount of business in liquor and wine that Julius Wile Sons & Co. was permitted to conduct was not enough to sustain the business.  And so the firm adapted, forming a sideline, The Wile Corporation.  In 1921 The Index of Export Merchants listed it as dealing in "hosiery, underwear, hardware, iron, steel, textiles, groceries, cigars, cigarettes, general merchandise."
Unfortunately for Julius Wile Sons & Co., gangsters were as harmful to its business as was Prohibition.  On February 2, 1924, the New York Evening Post reported, "Four thousand cases of well aged Scotch were stowed in the Cunard-Anchor liner Cameronia when she sailed at noon to-day from Pier 56 and Chief Office A. H. Kesson submitted that carrying Scotch to Glasgow outdid the adage of carrying coals to Newcastle."
The liquor was part of a 9,000 case order earlier imported by Julius Wile Sons & Co.  The remaining 5,000 cases were scheduled to ship on the next ship to Glasgow.  The article said, "They are sending it back because they cannot meet the competition in supplying druggists and hospitals, of bootleggers, who undersell them $21.75 a case."  Kesson told the reporter that the shipment was guarded by "a whole regiment" of security men on the way to the docks.
Julius Wile Sons & Co. now focused even more on alternative products.  The following year, on April 12, The New York Times reported that the California Crushed Fruit Corporation, "manufacturers of orange, grapefruit and lemon juices," had opened a New York office at 62 Ninth Avenue in cooperation with Julius Wile Sons & Co., "who will act as their New York representatives for ten years."
Just over a year later, on May 13, 1926, The New York Times announced, "Julius Wile Sons & Co., for many years in the liquor business at 62 Ninth Avenue, have taken a long term lease...on the building at 10 Hubert Street, northwest corner of Collister Street.  After improvements are made the new tenant will use the building for the sale and handling of fancy groceries."
As an important side note, following the repeal of Prohibition, the resilient firm returned to importing wine and liquor and once again became a leader in the field.  For years, Julius Wile's grandson, also named Julius, would write the wine section of the Encyclopedia Britannica's Book of the Year, and in the 1970's would rewrite the 1941 book Encyclopedia of Wine.
Following Julius Wile Sons & Co.'s departure, the architectural firm of Maher & Ward made renovations to the building.  There was now an office and market on the ground floor, and warehouse and factory space above.
In the 1960's the Ruger Chemical Co., Inc. occupied the building.  By the mid-1970's a Chase Manhattan Branch occupied part of the ground floor.  It was the scene of a terrifying armed robbery on August 12, 1978.  That day Michael McClanahan, Wayne McClanahan and Rickard Mickens walked in with guns drawn.  They made off with $8,000.  The McClanahan brothers were captured before long, but Mickens remained on the lam until April 12.
Historian Jay Shockley, in writing the 2003 landmark designation report of the Gansevoort Market Historic District, said, "At the time of designation, this property was under construction, which entailed the alteration of and addition by architects Sharples Holden Pasquarelli to a 1905 wine warehouse.  Above the fourth story of the building, the new addition is cantilevered over No. 60 Ninth avenue." 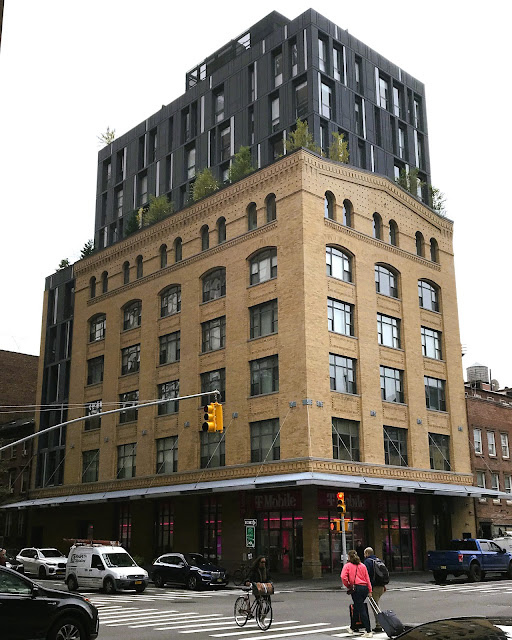 One wonders if Sharples Holden Pasquarelli's design would have been approved had the addition not been begun prior to the district's designation.  The sleek, black form that rises above Boring's warm brick warehouse makes no attempt at architectural continuity.
photographs by the author
no permission to reuse the content of this blog has been granted to LaptrinhX.com
Posted by Tom Miller at 1:00 AM