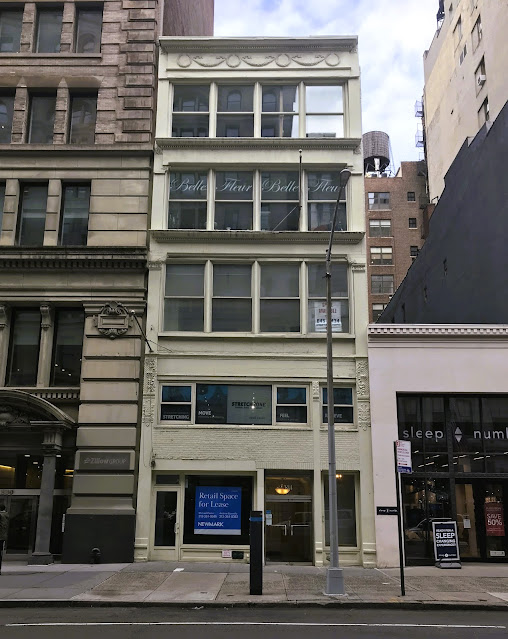 In the 1840's wealthy merchant Henry Beadel and his family lived at 707 Broadway, a neighborhood of fine brick mansions.  But following the construction of Henry and Laura Brevoort's lavish home on Fifth Avenue at 9th Street in 1834, fashion began moving to that thoroughfare.  In 1851 the Beadels were listed at their new Fifth Avenue residence, between 18th and 19th Streets.
The brownstone-fronted house held its own among the other Fifth Avenue mansions at four stories tall above an English basement.  At the time, Henry and his wife, the former Sarah Ebbets, had three sons, 7-year-old Henry Jr., 6-year-old Charles, and 4-year-old Frederick.  In 1851, soon after the family moved into their new home, a daughter, Sarah, was born, and Edward M. Beadel arrived in 1852.
Along with his mercantile business, Beadel invested in real estate and was a director in the Howard Life Insurance Co.  Like all well-to-do families, the Beadels summered in fashionable resorts or in Europe.  On July 3, 1862, The New York Times reported that the family had sailed on the Mercury, headed for Havre.  Both Henry Jr. and Charles were enrolled at Columbia College, by then.
Henry Beadel died in 1874 and by 1876 the family left 134 Fifth Avenue, leasing it to former Minister to France, Nelson Marvin Beckwith and his wife, the former Frances Margaret Forbes.  In compiling its list of "American Millionaires," the New-York Tribune reported that Beckwith had made his fortune "in the China trade and importation of spices and coffee."  He and Frances had three children, Leonard Forbes, Frances Helene Forbes, and Arthur.  A second daughter, Adelaide, had died in 1871.
The Beckwiths' elevated social station was reflected in a dinner party they held on December 12, 1884.  The New York Times remarked,

Mr. and Mrs. N. M. Beckwith, of No. 134 Fifth-avenue, entertained Mr. and Mrs. Orme Wilson, née Astor, at what was probably one of the most elaborate dinner parties of the season.  The table was decorated with a large centre basket filled with Gloire de Paris and Jacqueminot roses, and at each end was a basket of maidenhair ferns.  Between the centre basket and the ferns was placed at each end a handsome Louis Quatorze candelabrum, each holding six red candles with red satin shades.  Covers for 24 were laid.

Among the two dozen guests that evening was Mrs. Caroline Schermerhorn Astor, the mother and mother-in-law of the guests of honor.  Also invited was Louise Ward McAllister, the daughter of Mrs. Astor's closest ally, Ward McAllister.
By the time of the dinner party, Arthur listed his profession as an artist and sometimes as an architect, while Leonard was a civil engineer.
In September 1889 Nelson Beckwith died.  He left each of his children $300,000 (around $9.1 million by 2022 conversion), and equal shares in 800 acres of land.  The year after Nelson's death, Frances Helene married Hon. Francis Dudley Leigh of London.
The Beckwith name, however, soon appeared in print for darker reasons.  In 1890 Arthur was deemed insane and committed to an asylum in Litchfield, Connecticut, from which he promptly escaped.  He was found in 1893 hiding in Cuba, was returned to New York City and placed in a "retreat" in Flushing.  He escaped again and was not heard of again.
The New York Times reported on March 27, 1898, "Leonard Forbes Beckwith took charge of his brother's estate when he disappeared...During the same year--1893--he also went insane, and died shortly afterward."
In the meantime, the Fifth Avenue neighborhood had become more and more commercialized.  The Beadel family hired the architectural firm of D. & J. Jardine in 1888 to convert their former home for commercial purposes.  The stoop was removed and a store space installed at ground level.  It became home to the showroom of the Horace Waters & Co. piano firm, while the upper floors were leased to The School of Industrial Art and Technical Design for Women. 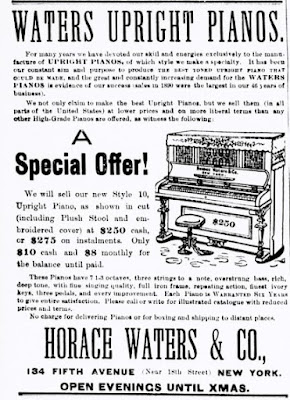 The Evening World, December 21, 1891 (copyright expired)
Howard Waters & Co. was established in 1845 by Horace Waters.  At its factory at 7 West 139th Street it made the Waters and Chester pianos, and the Autola player pianos.  Howard's sons, T. Leeds Waters and Horace Jr. had become partners around 1864, and after Horace Waters's death in 1893, the firm was headed by T. Leeds Waters.  The Purchaser's Guide to the Music Industries called the company "one of the best-known dealers in New York City."
The School of Industrial Art and Technical Design for Women was founded in the fall of 1881 by Florence Elizabeth Cory.  Its purpose was to train women in "manufactured arts."  In 1893 King's Handbook of New York said it "successfully teaches designing for carpets, wall-paper, cretonne, calico, silk, linen, portieres, carved and inlaid work, stained glass, lace decorated cards, china and all industrial art manufacturers."
The school remained in the building through 1894, after which the Beadel family remodeled it again.  This time architect Charles R. Behrens completely transformed the structure, erasing all hints of its domestic origins.  The brownstone was stripped off and a modern cast iron facade installed.   The two-story storefront was decorated with ornate Aesthetic style designs, and each of the upper floors was defined by a prominent intermediate cornice.  A frieze of neo-Classical wreaths and garlands ran below the terminal cornice. 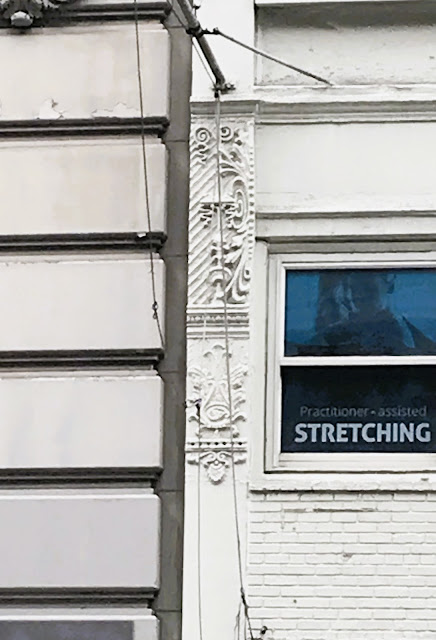 Horace Waters & Co. remained in the two lower floors, taking advantage of the vast show windows.  A long-time employee was Samuel Tilly White, who was hired at the age of 16 in 1870 as a "bundle boy."  Decades later, as a branch manager and salesman, he would bring his small son Elywyn Brooks White to work on special visits.  The boy would go on to become the well-known writer and author E. B. White.  In 1969 his granddaughter, Martha White, published Letters of E. B. White, in which he described those visits:

When I was a child, I used to watch parades from a front-row seat next to the big plate glass window on the second floor of 134 Fifth Avenue--a splendid vantage point.  I was "Mr. White's boy," marked for the special treatment.  I made many visits to 134 and remember particularly the wonderful sad sound of a piano being tuned somewhere in the building.

The three upper floors were leased to other tenants, like the publishers of School Magazine, here in 1914. 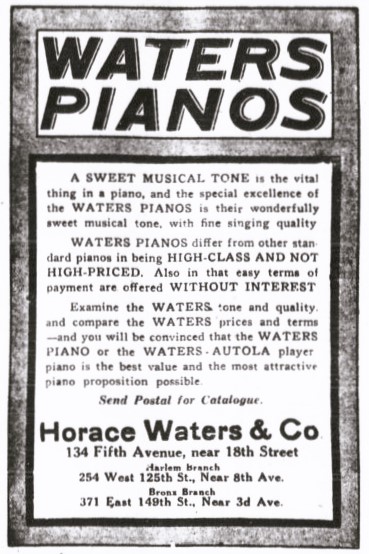 The Evening World, February 27, 1922 (copyright expired)
In 1929 Howard Waters & Co. merged with The Janssen Piano Company.  (The Howard Waters name would be discontinued around 1949.)  Its former showroom became a restaurant.
After having owned the property for nearly a century, the Beadel family sold 134 Fifth Avenue in 1940.  The restaurant's lease was discontinued the following year. 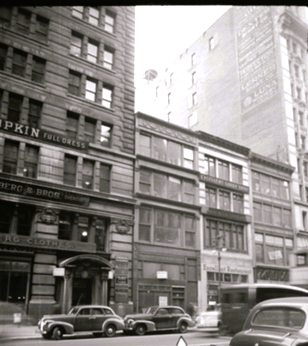 In 1941 the two-story restaurant space was vacant.  via the NYC Dept of Records & Information Services.
In 1950 A. J. Van Dugteren & Sons opened its showrooms and offices here.  The importer of European glass and pottery had previously operated from 5 East 57th Street.  Around the same time East House enterprises, manufacturers and importers of paper products occupied space on the upper floors.  The firm would remain until early in 1964.
Somewhat abused by the last quarter of the 20th century, the building saw a series of occupants.  In 1971 the Underground Gallery opened with an exhibition of photographs by Norman Snyder and Fred Picker.  On the fourth floor, from 1974 to 1982, was the studio of photographer Eric Meola.  It was the scene of a photo shoot on June 20, 1975 that resulted in, as Meola words it, "one of the most famous rock album covers"--Bruce Springsteen's Born to Run.  (Meola discusses the shoot with the artist and Clarence Clemons in his blog site.) 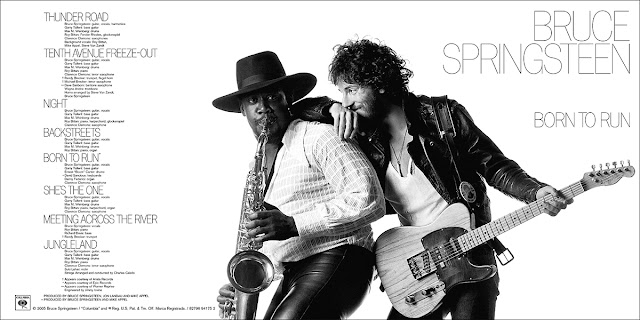 The cover opens to reveal the complete photograph of both men.  © Eric Meola
More recently, in 2015 a Nautica pop-up store opened in the lower levels, followed by a Tracy Reese pop-up store in 2017.  A bit battered today, the building encapsulates more than a century and a half of change along the block--from a period of elegant mansions, to women's struggles to obtain equality in the workplace, and to modern photography and trendy boutiques. 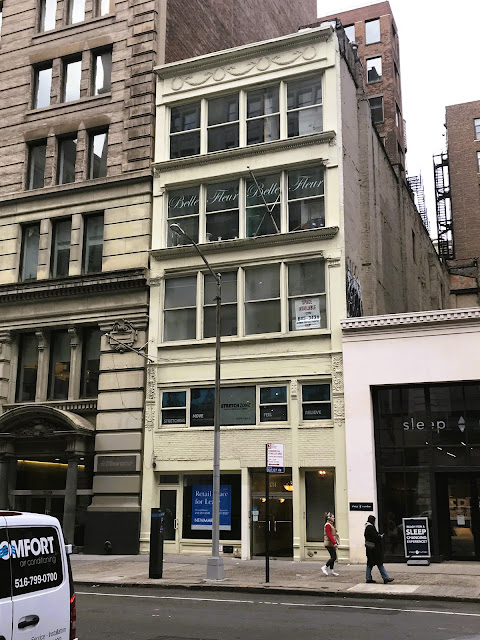