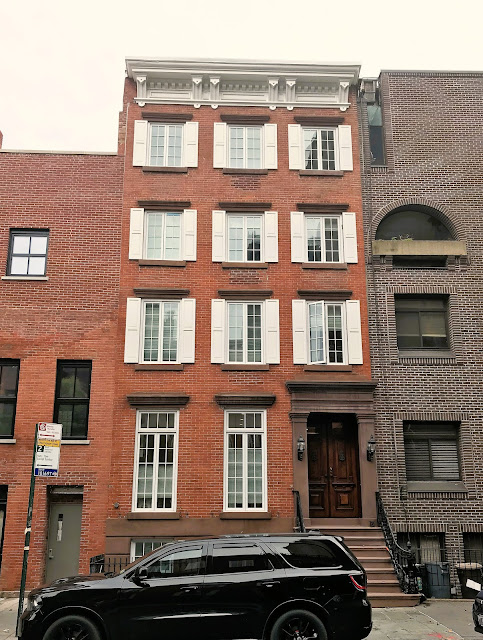 As early as 1851 Robert Barkley and his family lived in the 22-foot-wide house at 245 West 19th Street (later renumbered 367).  The three story, high-stooped residence was faced in red brick above a brownstone basement.
Robert Barkley was a director in the Citizens' Fire Insurance Company on Wall Street, and ran a business at the corner of Eighth Avenue and 23rd Street.  (In directories he listed his professional vaguely as "president," without detailing what his company did).  His son, William A. Barkley, was in the drug business at 97 Broad Street.
He apparently dabbled in real estate in the burgeoning Chelsea district, as well.  In 1853 he advertise a vacant plot near his own business for rent.  "To Lease--To merchants or manufacturers--The owner of a lot on the most business part of the Eighth avenue will build a story any size desired for a good tenant.  Apply to R. Barkly, 245 West Nineteenth street."
A block to the south of the Barkley home, at the northwest corner of Ninth Avenue and 18th Street, was the grocery store of James M. Edgar.  Like Barkley, he seems to have been confident in the development of the neighborhood.  At the meeting of the Board of Aldermen on October 4, 1852, the "petition of James M. Edgar and others, for a railroad in Ninth avenue," was read and forwarded to the Committee on Streets.
When the Barkley family left the West 19th Street house in 1857, the Edgars moved in.  James M. Edgar and his wife, the former Susan Freeman, had five children, Mary Isabella (who was married to John Williams Mott), Jane A. (who had married Augustine Campbell the year before her parents moved into 367 West 19th Street), Thomas, James Jr., and Amanda L.
When the family moved in, James, Jr. was still attending P.S. 11.  Five years later, in 1862, he was a clerk with the United States Land Office, working for the Surveyor General of New Mexico.  He seems to have rethought his career before too long, however, and by 1867 was working in his father's grocery business.
In the meantime, James M. Edgar, Sr. had added Chelsea real estate development to his resume.  In 1862 he completed two "model English basement houses" a block to the west on 19th Street Street.  His description of in an advertisement that April testifies to their high-end tenor, including "hot and cold water to fourth stories; bathing rooms, water closets."
Amanda Leviness Edgar was married to Winfield Bloodgood in the Collegiate Reformed Dutch Church on December 17, 1863.  Six years later, on February 27, 1869, her 31-year-old brother, Thomas, died.  His funeral was held in the parlor two days later.
James Sr. continued balancing his real estate operations with his grocery business.  On December 3, 1875, he advertised, "French Flats to let--All modern improvements and light rooms."  The term was recently being used to differentiate what would later be called apartment buildings from lower grade tenements.
It was around this time that he updated his own home.  A full fourth floor was added, capped by a modern neo-Grec style cornice, and handsome paneled Eastlake style doors replaced the Greek Revival originals--those no doubt had been flanked by narrow sidelights.  Interestingly, the Greek Revival stoop and areaway ironwork were preserved.
Around 1881 the Edgars' grandson Lewis Freeman Mott moved into 367 West 19th Street.  The son of Amanda and John W. Mott, he was attending the College of the City of New York at the time.  Following his graduation, he remained with the his grandparents, working first as a tutor at his alma mater, and in 1897 being appointed a professor.  The erudite young man was a member of the Reform Club and the American Dialect Society. 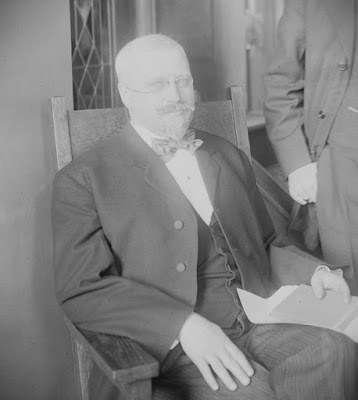 Lewis Freeman Mott later in life.  from the collection of the Library of Congress
Lewis Freeman Mott would go on to a stellar academic career.  A scholar of American English, while living here he published The System of Courtly Love in 1894.  It would be an introduction to his Vita Nuova of Dante.  He would published The Provencal Lyric in 1901, and Sainte-Beuve in 1925.
After three decades in the house, the Edgar family left in 1900.  Their former home became a boarding house, one of its tenants receiving permission from the city in May 1901 "to keep chickens."
The residents over the next few decades would be working- or lower-middle class.  Among them in 1909 was Hjalmar A. Ekman.  Listing himself as a "soldier," he had been apparently recently discharged and was now looking for a job.  He found one that year when he was appointed to the New York Police Department as a patrolman.
In 1914 an elderly widow, Lillian Shute, rented a room here.  She left the house to mail a letter on May 22 that year, and her timing could not have been worse.  Just as she reached the mailbox at 19th Street and Ninth Avenue, a runaway team of horses galloped down the avenue.  She was trampled and killed.  "Her identity was established through a rent receipt found in her handbag," reported The Evening World.
Not all of the roomers in the post-World War I years were respectable or law-abiding.  Living here in 1923 was 20-year-old Edward Moore.  At 4:00 on the afternoon of May 8, cabbie John Pick parked his taxi in front of a restaurant at Tenth Avenue and 25th Street.  While he was eating, he saw Moore and two accomplices enter his cab and drive off.  Pick notified patrolman John B. Smith, who "commandeered a passing automobile and gave chase," as reported by The New York Times.
On 18th Street, between Tenth and Ninth Avenues, the car knocked over at 14-year-old boy, then crashed into a milk truck.  Patrolman Smith was right behind.  A crowd on the street tried to stop the fleeing crooks, but when one of them pulled a revolver, the civilians retreated.  Officer Smith, however, did not.  At Ninth Avenue a shoot-out took place, one errant bullet wounding a bystander.  In the end, Moore and one of his accomplices were captured.
In 1933 architect Abraham Grossman was hired to renovate 367 West 19th Street.  His remodeling resulted in a triplex apartment in the basement through second floors, and a duplex above.  A subsequent renovation completed in 1965 created a total of three apartments.  Neither of the projects extended to the exterior of the venerable house, which looks much as it did when James M. Edgar gave it his own updating in the 1870's.
photographs by the author
no permission to reuse the content of this blog has been granted to LaptrinhX.com
Posted by Tom Miller at 1:00 AM