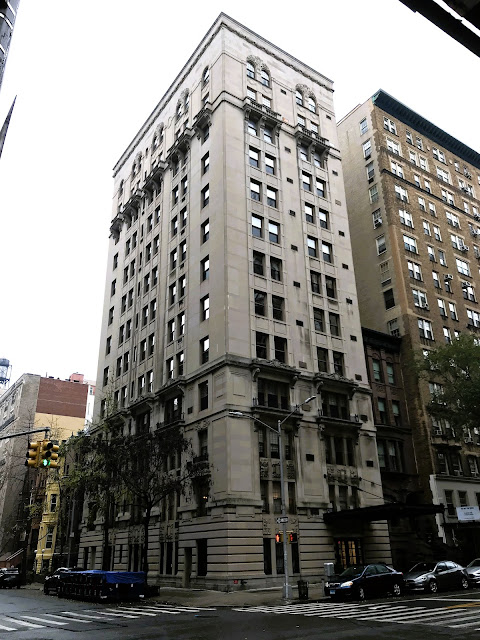 In 1914 the Hamilton Institute for Girls had operated from the former mansion at the northwest corner of West End Avenue and 89th Street for years.  At the time, however, the thoroughfare's lavish private residences erected within the past two decades were rapidly being replaced by upscale apartment houses.
Alfred Saxe was among the developers responsible for the trend.  In 1903 he had built the lavish Hotel Belleclaire on Broadway, simultaneously giving architect Emery Roth his first substantial commission.  Now the men would work together again.  In 1915 Saxe put together the 601 West End Av. Inc., purchased the corner property, and set about erecting a modern, 12-story apartment building.  Roth's plans, filed in May that year, placed construction costs at $260,000, or around $7.23 million in 2022.
Completed early the following year, 601 West End Avenue was faced in limestone.  Roth's Italian Renaissance design was splashed with touches of Vienna Secession.  It featured iron-railed balconies at the fourth floor, and stone-balustraded balconies at the 12th.  The two-story top section was dignified by double-height arches that held paired windows.  Inside there were just one apartment per floor.
Among the initial residents was Blanche Lasky, who had just divorced.  Blanche had started out as a vaudeville performer with her brother, Jesse Louis Lasky, who played the cornet in their duo act.  In 1910 she married Samuel Goldfish and they had a daughter, Ruth.
In the meantime, her brother had turned to producing musicals.  He met producer Beatrice DeMille, who introduced him to her son, Cecil B. DeMille.  The meeting would change the lives of Blanche, her husband, and her brother.  In 1913 DeMille, Lasky and Samuel (who had changed his last name to Goldwyn) teamed to form the Jesse L. Lasky Feature Play Company to produce silent movies.
Samuel Goldwyn's philandering resulted in their divorcing in 1915.  Both her brother and ex-husband would go on to motion picture fame, while Blanche took back her maiden name and settled comfortably into 601 West End Avenue with little Ruth.
Blanche's self-reliance went far beyond dropping her married name.  While almost all other well-heeled young ladies were driven about by chauffeurs, Blanche took the wheel herself.  It ended badly, though, on Saturday afternoon September 21, 1918.  Two days later, The Sun titled an article "Girl Driver Runs Down Boy."  It was a serious accident.  Blanche had hit seven-year-old Peter Hresko in Yonkers.  The Sun reported, "The boy was rushed to St. John's Riverside Hospital, where it is said he has a slight chance for recovery."  He had suffered a fractured skull and broken collarbone.  The New-York Tribune added, "Miss Lasky is a sister of Jesse Lasky, the motion picture man."
At the time of the accident, Blanche had found love.  In 1917 she had became engaged to Hector Turnbull, the dramatic editor of the New-York Tribune.  But their plans of marriage were derailed by America's entrance into World War I.  The New-York Tribune said Turnbull "had to help the 27th Division break the Hindenburg line before he could realize his romantic ambition and marry Miss Blanche Lasky."
Lieutenant Turnbull returned from France on March 13, 1919 and wasted no time in making Blanche his wife.  They were married five days later.  Turnbull's military duty was not quite finished, and he returned to Camp Upton on Long Island.  The New-York Tribune remarked, "When he is discharged he will take his bride to California and write plays."
The residents of 601 West End Avenue, of course, maintained a domestic staff.  When the fifth floor tenants left town in 1921, an advertisement appeared in the New York Herald:

Couple--Lady would like to place her English couple, man and wife, as cook and butler permanently; can recommend both very highly in every respect; country for summer.

In 1930 Joseph Baumann, who ran a furniture business, and his wife occupied the sixth floor apartment.  Living with them were four servants, a butler, maid, nurse (who had charge of an infant), and a cook.  On June 12 that year, Mrs. Baumann entered a hospital for a minor operation.  When she returned home four days later, she discovered $100,000 in jewels missing from her bedroom.
The burglars had a narrow time frame during which to make the heist.  According to The New York Times on June 17, "Some member of the household was said to have been in the apartment all the time during Mrs. Baumann's absence, except between 3 and 8 o'clock on Sunday afternoon."  It was thought that the thieves entered Mrs. Baumann's bedroom window, which opened onto a fire escape.  The article noted, "Mrs. Baumann, who was confined to her bed upon return from the hospital, expressed confidence in her servants."   The value of the stolen gems reflected the affluence of the residents of the building, equaling more than $1.6 million today.
The building that had been home to wealthy socialites for decades was converted to a single-room-occupancy hotel in 1949.  Then, in 1957, it was remodeled as the Mayflower Nursing Home.  Its residents were well-heeled and many of them well-known.  Josephine Emerson, for instance, was an early resident.  A relative of poet Ralph Waldo Emerson, she had served as concertmaster of the orchestra of the National Conservatory of Music from 1892 to 1895, while Antonin Dvorak was its director.
Mabel Parsons was also an early resident.  Her father, Samuel, had been Superintendent of Planting, Superintendent of Parks, landscape architect, and Park Commissioner.  He had spent his career fighting encroachment of commerce into Central Park, and following his death Mabel took up the cause.  In 1923 she opposed the building of a subway extension under the west side of Central Park, insisting that it would take years to replace the trees destroyed in the process.  She later fought Mayor John F. Hylan's plan to build a music and arts center on four and one-half acres of the park, and in the 1960's, when Huntington Hartford donated funds for an outdoor café on the southeastern corner of the park, she successfully derailed the plans.
An audit conducted by the Department of Social Services in 1973 revealed disturbing practices.  It found that the operators of the Mayflower Nursing Home were pocketing Social Security checks of dead patients.  The findings may have prompted an unannounced visit on November 21, 1974 by the Temporary State Commission of Living Costs.  It found "the same deficiencies in care and the same violations of safety codes," that had been reported over a 17-year period.  A New York Times reporter visited, as well, writing that he "found it to be a former hotel overcrowded, by Medicaid standards."
On July 1, 1975, The New York Times reported that the Mayflower Nursing Home had been shut down.  The vacant building was purchased by the Recycling for Housing Partnership of Austin Laber and Jerome Kretchmer.  As the renovations and conversion to a cooperative apartment building neared completion on April 28, 1978, The New York Times reported "there are to be 25 three-bedroom apartments and a two bedroom penthouse."  At the time, 22 of the apartments had already been sold. 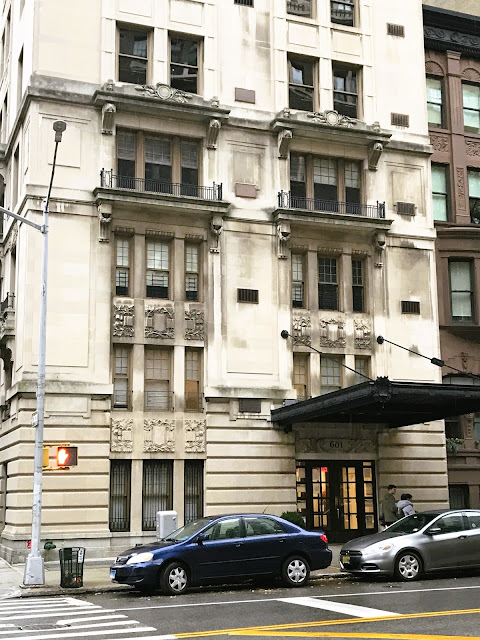 The exterior of Emery Roth's dignified structure survives beautifully intact.
photographs by the author
no permission to reuse the content of this blog has been granted to LaptrinhX.com
Posted by Tom Miller at 1:00 AM