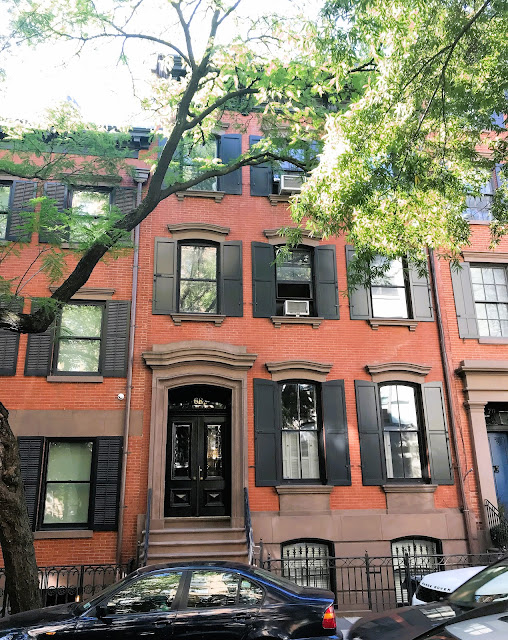 Jacob C. Bogert was listed as a builder in city directories.  In 1863 he completed a project for himself and his family, a handsome 25-foot-wide residence on Bank Street between West 4th and Bleecker Streets.  Three-and-a-half stories tall above the high basement, the attic within the peaked roof was punctured by graceful dormers.  The entrance and windows wore gently curved "eyebrow" cornices.
Bogert and his wife, the former Almira Frost, had five children, John A., Harriet Louisa, Catharine A., William Patton (known as Willie), and Susan M.  While Bogert kept busy in construction, he was also highly involved in the public school system.  Since the 1840's he had been a trustee in the Board of Education.
John A. Bogert had joined the 127th New York Volunteer Infantry in 1861, and the summer that his family moved into the Bank Street house he was involved in the siege of Charleston, South Carolina.  In October 1864 he was assigned as provost marshal at Beauford, South Carolina (meaning that he was responsible for its government), and in February 1865 was appointed lieutenant colonel of the 103d U.S. Colored Infantry.  (The officers overseeing Black troops were always white.)  Letters from the war regularly arrived at the Bank Street home.
William Bogert did not fight in the conflict.  In 1865 he was appointed to the Board of Education and in 1865, at the age of 24, he married Emma Sebring.  The couple moved into the Bank Street house where they would have two children.
John was discharged in 1866.  He moved into the Bank Street house with his parents, went into the marble business, and married Mary Elizabeth Vrendenburg.  Both were "members of old and honored families of Holland Dutch origin," said the 1900 History of Westchester County.
On December 21, 1869 John and Elizabeth welcomed a son, Albert Cole.  Tragically, four months after his son was born, John A. Bogert died at the age of 34.  Uniformed members of the 127th Regiment filed into the Bank Street house for his funeral on April 17, 1870.  Albert would follow in his father's footsteps, first entering the marble business and then earning accolades for his valor in World War I.
Catharine A. Bogert married Louis K. Bell in 1872 and they, too, moved in with her family.  Louis was vice-president and secretary of the Oil, Paint and Drug Publishing Company and of The Druggists Circular.  In 1886 the Bells had a baby girl, Myra Louise.  (Sadly, she would die at the age of 9 in 1895.)
The parlor of 68 Bank Street would see a series of funerals over the succeeding years.  Harriet Louisa, who never married, died on October 15, 1874 at the age of 34.  Her mother died in 1881, and Jacob C. Bogert died at the age of 73 on May 12, 1884.
The house was inherited in equal parts by the three surviving children.  Susan and Catherine transferred their portions to William in October 1885.  The property was sold at auction on April 19, 1887.
It was purchased by Charles and Catharine A. Duttweiler for $16,850--about $495,000 in 2022 terms.  The couple immediately hired architect E. Haight to make renovations.  His plans read, "building to be raised."  The changes apparently affected the rear extension of the residence only.
The Duttweiler, who had a daughter, Magdalena, took in selected boarders.  In 1894 John Whitaker Watson and his adult daughter took rooms with the Duttweilers.  Described by The Weekly Press as a "well known literary man," he was known professionally as J. W. Watson, and wrote for Harper's publications and Frank Leslie's Magazine for years.  (Following the Civil War he was editor of Frank Leslie's Magazine.)  Watson was, perhaps, best known for a single poem, "Beautiful Snow," which appeared in a November 1858 issue of Harper's Weekly.  The Weekly Press said the poem "moved the London Athenaeum to admiring praise."
When Watson and his daughter moved in, he was already suffering from heart problems.  They led to his death here on July 19, 1896 at the age of 69. 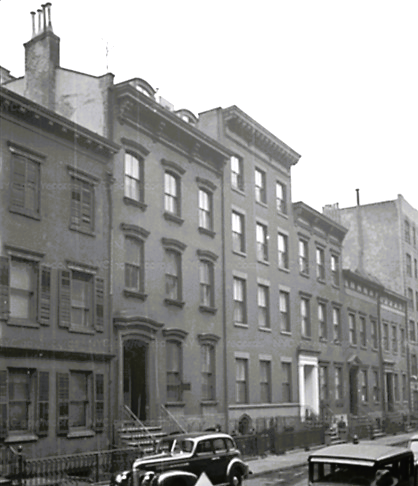 The attic dormers can be seen in this 1941 photograph.  image via the NYC Dept of Records & Information Services.
Charles Duttweiler died a widower at the age of 76 on June 10, 1916.  As had been the case so many times before, his funeral was held in the parlor two evenings later.  Magdalena inherited the house and continued living in it until her marriage in 1920.  That year she converted 68 Bank street to bachelor apartments--a term that meant they had no kitchens. 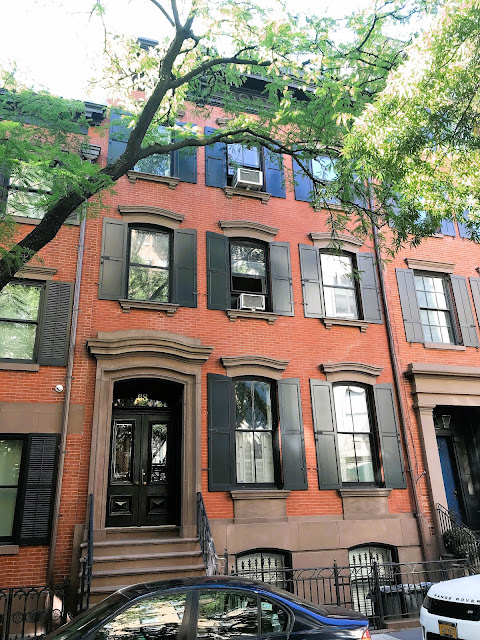 That configuration changed in 1936 when H. B. Horwood completed another renovation that resulted in two apartments in the basement, one on the parlor level, two each on the second and third floors, and one on the fourth.
photographs by the author
no permission to reuse the content of this blog has been granted to LaptrinhX.com
Posted by Tom Miller at 1:00 AM