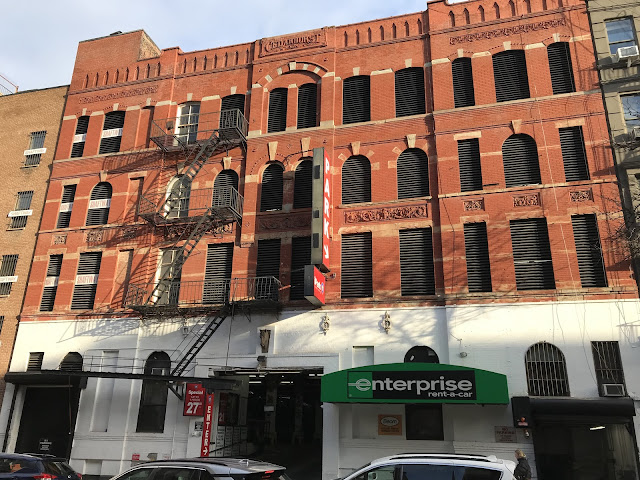 The building boom on the Upper West Side in the last decades of the 19th century created an urgent need for churches, schools and boarding stables.  There were more than 170,000 horses in New York City as the turn of the century approached and now a significant number of them were being brought to the developing district.

Edward W. Bedell recognized the niche.  On October 15, 1887 he purchased a 75-foot-wide plot on West 83rd Street, between Ninth and Tenth Avenues (soon to become Columbus and Amsterdam Avenues) from Patrick O'Thayne for $28,000--or about $823,000 in 2022.  He soon began construction of a five-story brick boarding stables on the site.
Almost assuredly, Bedell's architect was Frank A. Rooke.  (Five years later he would design Bedell's Claremont Stable nearby on West 89th Street.)  Completed in 1889, the Romanesque Revival style structure was broken into five vertical sections, those at the ends and center slightly projecting so as to break up the visual mass.  Stone bandcourses defined each floor.  The architect gave the utilitarian structure handsome touches, like intricate terra cotta panels and stone voussoirs.  At the ground floor the building's purpose was reflected in cast iron horseshoe ornaments and a carved horse's head about the carriage bay.  An elaborate terra cotta panel within the brick parapet announced the stable's name: Cedarhurst. 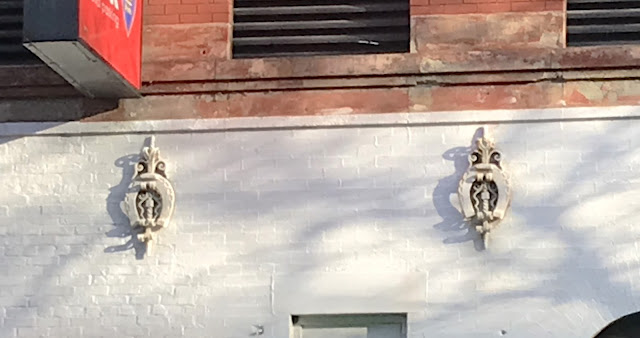 The details of these horseshoe ornaments have been obscured by decades of paint.
Inside, a system of ramps enabled horses and vehicles to be moved from floor to floor.  There were 135 stalls for horses.  A sizeable elevator transported larger carriages to the upper areas.  In the rear would have been a large manure pit.
Bedell leased the Cedarhurst Stable to brothers Lee and Darius Tallman.  On March 12, 1890, he sold the property to millionaire Charles F. Havemeyer for $90,000 (a significant $2.7 million today), who quickly transferred title to his brother Theodore.  The Tallman brothers retained their lease until Bedell completed the Claremont Stables in 1892, at which time they leased that building.
Havemeyer now rented the Cedarhurst to Smith & Hempstead.  The partners operated it both as a livery and boarding stables.  Customers who needed a vehicle for the day could choose from a variety of carriages--similar to today's rental car businesses.  And those who owned their own horses and vehicles paid to house them here--like today's parking garages.  Included in the boarding tenants' rates was the care and feeding of their animals and the maintenance of their vehicles. 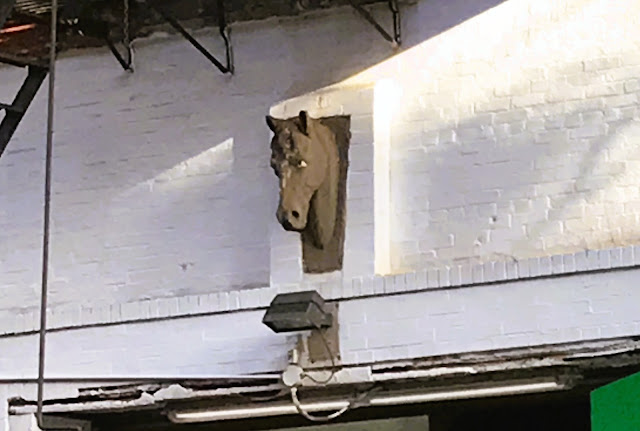 Painted today, the carved horse's head above the carriage bay survives after more than 130 years.
Operating a substantial stable like the Cedarhurst required a sizable staff, including grooms, stable boys (who changed hay, shoveled manure and such), polishers who kept the brasses and carriage lanterns shined, and others.  In 1895 the Cedarhurst employed 23 stablemen and grooms.  Among the grooms working here in 1892 was Richard Dore, who was hired in September 1891.
The big man (he was around six-feet tall) and his wife had three children and lived in an apartment on West 66th Street.  He had a history of somnambulism from childhood.  On June 27, 1892, The Evening World reported that on the evening before, Dore had come home from work and gone to bed.
"At about midnight Mrs. Dore, who had been trying to get her baby to sleep and had fallen into a doze, heard a short outcry," said the article.  "She sprang to her feet in time to see her husband disappearing through the window.  Her screams soon awakened the neighbors, one of whom notified police of what had happened."  The sleep-walking groom had stepped out of their second floor window, striking his head and dying instantly.  The article noted, "Mrs. Dore's grief is appalling.  She is a refined-looking woman of about thirty.  She goes about wringing her hands, but utters no cries...Now and then she says, in a scarcely audible voice, 'What will become of the children!'"
At the Cedarhurst Stable, one of the proprietors, Mr. Hempstead, told a reporter, "Dore was an exceptionally good man.  His work was perfect.  In the nine months that he was with us, we grew very much attached to him."  The groom's popularity among his co-workers was exemplified by one of the groom's sobbing at the news of his death.  Hempstead said he would try to assist the widow to "afford her relief." 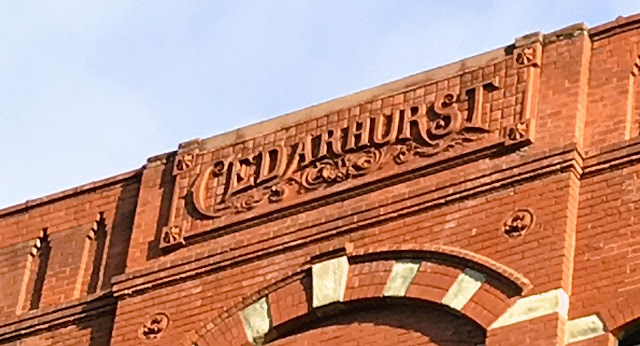 Smith & Hempstead occasionally sold horses and vehicles.  On June 20, 1893 The Sun reported, "Bargains in stylish and differently gaited horses can be seen at the Cedarhurst stables of Smith & Hempstead.  They have a select number of roadsters fresh from the country."
In 1895 Hempstead and E. C. Smith parted ways.  Smith went into partnership with Peter T. Radiker as Smith & Radiker.  New York, 1895: Illustrated called them "both natives of this city, and young men of excellent business ability."  Saying that the Cedarhurst was "one of the foremost establishments engaged in this industry," it noted the amenities customers enjoyed:

The establishment is heated by steam, has a steam power elevator, all modern sanitary improvements, a handsome ladies' reception-room, harness-room, and all conveniences.

The ladies' reception room was obligatory.  Here genteel women could wait in a nicely furnished space away from the noises and smells of the stable proper.  The article noted that Smith & Radiker owned " forty fine road and saddle horses, [and] fifty carriages and wagons" available to lease.  It added, "A general livery and boarding business is carried on, and satisfactory service and the most courteous treatment is assured all patrons."
Smith & Radicker dissolved in 1897, replaced by the Cedarhurst Stable Company with Radicker as its principal.  The troubles between the two men had most likely been financial.  On February 10, 1897 The Sun reported that Theodore A. Havemeyer had won a judgment for $12,605 in back rent.  It was a sizeable amount, equal to about $425,000 in 2022.
Finances continued to be tight for Radiker, and in May 1901 he declared personal bankruptcy.  The New York Times reported, "He has 147 shares of stock of the Cedarhurst Stable Company.  He was formerly of Smith & Radicker, who were in the stable business for several years."
Nevertheless, Radicker somehow held onto the business.  He sold a part of the livery operation in 1906.  By then Seaman's Stables was operating from the Claremont Stables building and that year it announced that it had "recently purchased the Carriage Service interests of the Cedarhurst Stables in 83d Street," promising "their customers will receive special and careful attention."
At the time, motorcars were rapidly replacing horses on the streets of New York.  In 1908 Peter Radicker organized the Cedarhurst Motor Livery Company.  The Horseless Age explained it was incorporated in part "to operate a taxicab service with Frayer-Miller cabs.  This service will be of a private nature, no business being done from stands."  The company started off with five cabs and promised there would be 20 more by September.  It also operated a service garage in the building. 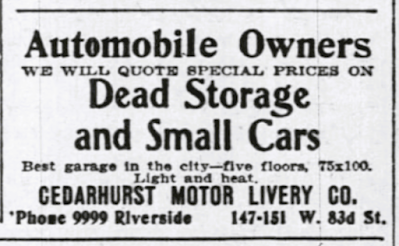 The New York Times, November 6, 1908 (copyright expired)
The Cedarhurst Motor Livery Co. remained in the building through 1921.  Its management often helped customers sell their automobiles, offering a venue in which to inspect the cars.
In 1922 Francis J. Sheridan leased the property "for a long term," as worded by the New-York Tribune.  The article said, "The lessee will make extensive alterations."  It may have been at this time that the two additional vehicle entrances were carved into the facade.
Appropriately, the building functions today as it did in 1889.  Owners store their vehicles here on a monthly basis, while others can rent one temporarily.
photographs by the author
no permission to reuse the content of this blog has been granted to LaptrinhX.com
Posted by Tom Miller at 1:00 AM