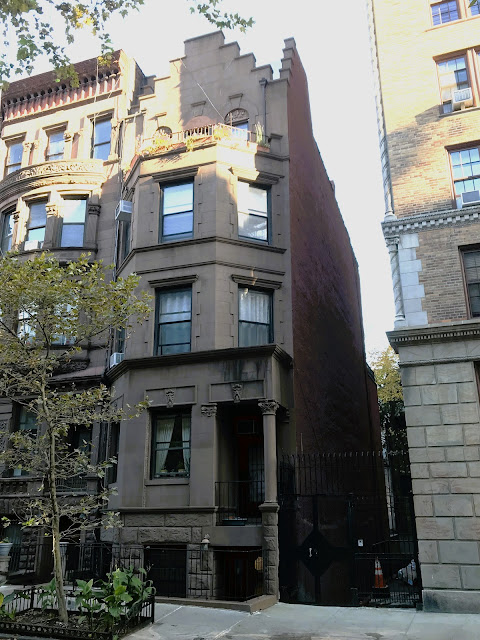 Millionaire William E. D. Stokes turned to real estate development in the late 1880's, focusing on the Upper West Side.  For three years, from 1887 through 1890, his rows of homes were designed by architect Joseph H. Taft.  In 1889 Taft designed a row of four brown-fronted residences on the fashionable block of West 88th Street, between Riverside Drive and West End Avenue.  As he often did, the sometimes eccentric Stokes listed the owner of record not as himself, but as W. Gunn and A. Grant.

The sole survivor of the row, completed in 1890, is 313 West 88th Street (the others were demolished in 1927).  The 19-foot wide house rose four stories above an English basement, its stoop rising to an entrance tucked within a cantilevered portico upheld by a single corner column.  The three-sided bay of the second and third floors provided a balcony to the fourth.  Flemish stepped gables at the front and eastern side gave the house a Dutch feeling.  Inside were 14 rooms and three baths.
By the turn of the century 313 West 88th Street was owned by Lloyd Williams.  Boarding with the family in 1904 was 20-year-old Frank Bry, who described himself to police as a "professional bicycle rider."  He was arrested as a suspicious person on August 5 that year when, according to The Evening Telegram, he and two other men and a woman "were seen in Central Park spreading a quantity of silk handkerchiefs and watch fobs and guards on the grass."
Williams sold the house in March 1905 to John Schmieg and his wife, the former Minnie Lenora Hoffman.  The couple had a 17-year-old daughter, Florence Bell.
Born in 1863, Schmieg was a partner in the "gentlemen tailors" firm James W. Bell Son & Co.  (His close personal relationship with its principal may have accounted for his daughter's middle name.)  The shop catered to an upper-class clientele like Nikola Tesla, known for his sense of style, who reportedly had nearly all his suits made by James W. Bell & Co. 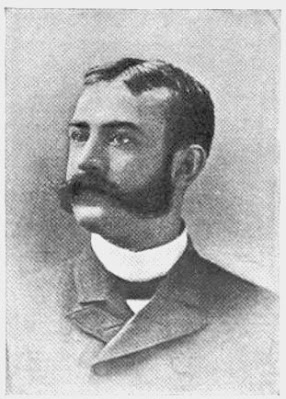 John Schmieg, The American Tailor & Cutter, January 1892, (copyright expired)
Like their well-to-do neighbors, the Schmiegs had a country home.  Theirs was at Larchmont Manor on Long Island.  The Schmiegs' social status resulted in their being invited to the inauguration of President William H. Taft in March 1909 by Almet Reed Latson, president of the exclusive Union League Club.  The Brooklyn Daily Eagle reported that the Schmiegs "brought their charming daughter, Florence Bell, along."
Latson had invited another couple, John William Tumbridge and his wife, as well.  Florence Bell and Mary Grace Tumbridge immediately formed a friendship, and Mrs. Tumbridge escorted her to the Inauguration Ball.
The Tumbridges lived in the elegant Hotel St. George in Brooklyn Heights.  John William Tumbridge's father, William, was its proprietor and one of its managers was John's younger brother, Stanley Spartan Tumbridge.  When the families returned to New York, Mary invited Florence to her home.
The Brooklyn Daily Eagle explained that Stanley "was duly presented to Miss Schmieg by his sister-in-law."  Young Tumbridge had graduated from Rensselaer Polytechnic Institute in 1900 with a degree in civil engineering and a year later earned his degree in mechanical engineering from Cornell University.  The Brooklyn Daily Eagle said the couple's introduction led to "a brief and ardent courtship."
Indeed, the chance meeting at the Presidential Inauguration had resulted in romance and only nine months later, invitations had been sent out for the Stanley's and Florence Bell's marriage.  On December 31, 1909, The Brooklyn Daily Eagle reported that the prospective groom "is also an enthusiastic autoist and it is said that he 'popped' the question to Miss Schmieg while she was autoing with him one day last summer to Garden City."  The article described Florence as "beautiful and accomplished," saying, "She is an expert musician and has achieved fame among her friends for her dexterity in ceramics."
The wedding took place in All Angels' Protestant Episcopal Church on January 18, 1910.  The New York Times reported that following the ceremony, a reception was held in the West 88th Street house.
The Schmiegs stayed in the West 88th Street house for another decade, selling it to S. L. Pakas, a real estate dealer, in June 1920.  Pakas paid $38,000 for the property, or about $514,000 in 2022 terms.  It is unclear whether Pakas lived in the house or leased it.  The affluent lifestyle of its occupants, nevertheless, was evidenced by an ad placed by a servant looking for new position in August 1922, "Japanese, experienced, wishes position; cook, useful butler, general housework, and can drive car.  S. Nako."  (In the 1920's it was quite fashionable to have a Japanese butler.) 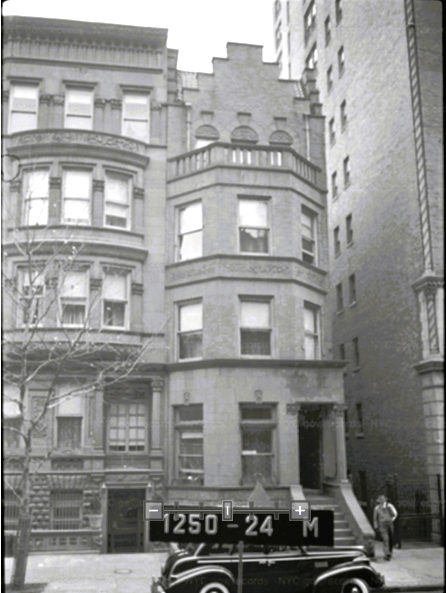 The stoop was intact in 1941, and the parlor windows were still full-height.  via the NYC Dept of Records & Information Services.
It appears that the house was lost in foreclosure during the Great Depression.  Fannie Schreier purchased it from the Bowery Savings Bank in August 1931 for $25,000.  A widow, her husband John had died in 1920.  The motorcycle cop had been struck by a taxicab in 1916 and, after two operations, died of his injuries four years later.
Fannie Schreier most likely took in roomers, but, surprisingly, 313 West 88th Street remained a single-family home until 1972 when it was converted to two apartments per floor.   The stoop was then removed and the entrance lowered to the basement level.  The brownstone was given a coat of white paint, most likely in an effort to give it a more modern look.  At some point around the turn of the century, the paint was happily removed. 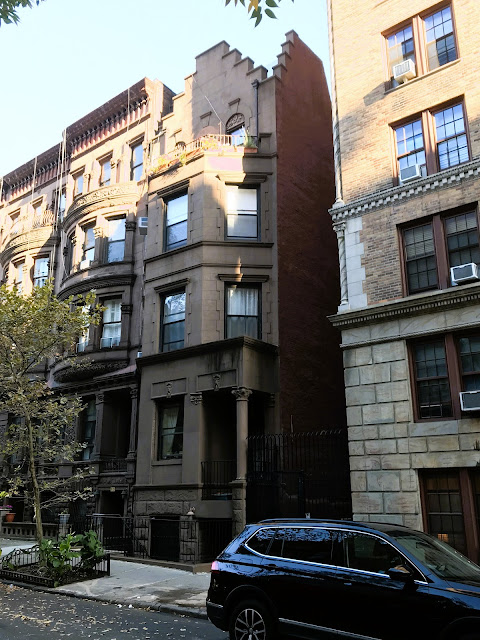