Clarence F. True was among the most prolific architects working on the Upper West Side in the late 19th century.  He would eventually design more than 400 houses in the district, almost all of them a playful take on historic styles.  He turned to the Elizabethan period in 1897 when he designed seven houses that wrapped the northeast corner of Riverside Drive and West 80th Street.

The easternmost of the row was 319 West 80th Street, which, like its fraternal siblings, was four-and-a-half-stories tall.  The arched entrance, flanked by two large, Elizabethan-style brackets, sat atop a two-step stoop.  The understated, bowed facade, faced in limestone, rose to a slate shingled mansard with a pedimented dormer.  Flemish stepped gables separated each house of the row at this level.
The newly-completed house was purchased by Winchester Fitch and his wife, the former Florence Hopper in February 1899.  An attorney, Fitch was the son of well-known lawyer Edward H. Fitch.  The couple had been married in 1897, a year after Winchester joined his father's law office. 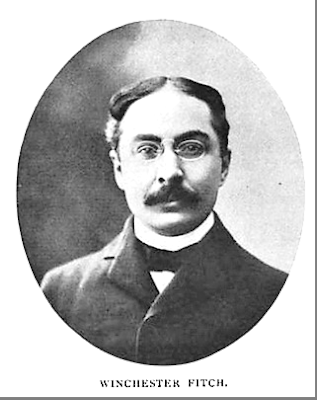 Winchester Fitch.  from Field Genealogy, 1901 (copyright expired)
Florence threw herself into entertaining.  On April 6, 1902, the New York Herald reported, "Mrs. Winchester Fitch, of No. 319 West Eightieth street, recently gave a charming breakfast for several visiting friends from the West.  Mrs. Fitch is a sister of Mrs. Nicholas, of the Dorilton, and has entertained much this winter."
The Fitches' summer home was Hillbrook, in Greenwich, Connecticut.  Both Winchester and Florence were amateur musicians, and their gatherings in both homes often centered around music.  On February 13, 1904, for instance, The Evening Telegram reported, "This afternoon Mr. and Mrs. Winchester Fitch, of No. 319 West Eightieth street, will give a musicale in honor of the members of the Shakespear [sic] Club."
It may have been their increasing family (they would eventually have three daughters and a son) that prompted the Fitches to upsize in July 1905.   They purchased the five-story, 25-foot wide residence on the corner of West End Avenue and 81st Street.  Their former home was purchased by retired broker Jennings Stockton Cox. 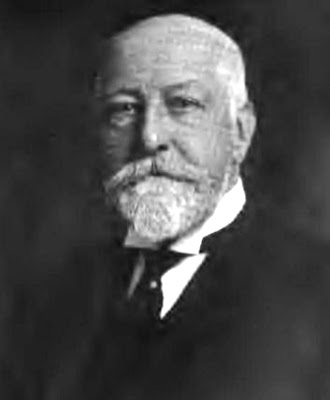 Jennings Stockton Cox  from The Cox Family In America, 1912 (copyright expired)
For years Cox had been associated with Jay Gould and Rufus Hatch.  In 1873 Gould had sent him to San Francisco as an agent of the Pacific Mail Steamship Company.  Upon his return to New York, he joined the brokerage firm of John H. Davis & Co.  He was a former president of the New York Athletic Club, and had memberships in the Larchmont Yacht Club, the New York Yacht Club, the Southern Society, and the Maryland Society of New York.
He and his wife, the former Mary McJilton, three grown sons, Arthur M., William, Jennings, Jr.; and a daughter, Mrs. R. C. Fisher.  Arthur and his wife lived in the West 80th Street house, as well.
Despite Jennings's elevated status within the social and financial communities, it was his son, Jennings Stockton Cox, Jr. who is best remembered among the family.  A graduate of the Columbia University School of Mines, Cox, Jr. was an engineer in the Daiquiri mine in southeast Cuba in the 1890's.  He supposedly concocted a cocktail of rum, sugar and lime juice while entertaining guests, which he named after the mine.  Although his father was included in the 1899 Notable New Yorkers of 1896-1899, it is Jennings Stockton Cox's contribution to American mixology that is best remembered.
In the meantime, Arthur and his family maintained a summer home near Gloucester, Massachusetts.  On August 27, 1907 their 11-year-old son, Arthur J. Cox, was in a boat in the Bass River near the house.  The New York Times explained that the river, "empties into the sea, some 200 yards beyond" the Cox property.  That afternoon, said the article, "three servant girls, bathing in the river, were swept out into deep water."
Walter J. Byrne, a life guard, rushed into action, but he could rescue only two of the women.  "Arthur Cox, who was not far away in a small boat, quickly rowed to where the third girl was going down for the last time.  The little boy jumped in, caught her around the head with one arm, and held on to the boat with the other until Byrne got back."  The newspaper noted, "The cottagers at the time made a fuss over young Cox, which so bored him that he took to the woods for a couple of days."
Jennings Stockton Cox, Sr. died of pneumonia in the West 80th Street house on October 21, 1913 at the age of 79.  In reporting his death, the San Francisco Chronicle said, "In the course of his life he was at one time and another a well-known figure in San Francisco, Baltimore and New York."  Ironically, Jennings, Jr. had died just six weeks earlier.
Four months later, Arthur Cox leased the house to Madame Louise Homer, "who will occupy the house while filling her engagement at the Metropolitan Opera House," said The Sun on February 21, 1914. 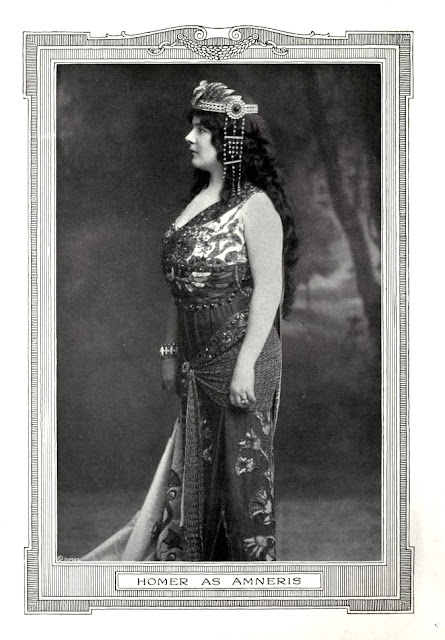 Louise Homer, from The Victor Book of the Opera, 1912 (copyright expired)
When Homer's lease expired, Arthur Cox leased the house to the Frederick Richard Gillespie family.   Born in Ireland in 1845, Gillespie was the head of Hammill & Gillespie, importers and manufacturers of clays.  He had been associated with the firm since 1867.  He and his wife, the former Julia Mendel, had three sons, Edward Stanley, Hilliard Mendell, George Maitland, and a daughter, Edith.  The family's summer home was at Shippan Point, near Stamford, Connecticut.
Edward was associated with his father's business, as well as being the treasurer of the Toronto Fur Company.  Still unmarried, he moved into 319 West 80th Street with his parents, most likely because of a serious physical condition.
The New York Herald explained that he was "an automobile enthusiast."  On October 12, 1915, the newspaper said, "While cranking his automobile at his father's country home in Stamford, Conn., three years ago, he ruptured a cardiac valve."  Edward never recovered from the injury and he died in the house only months after moving in, on October 11, 1915.  He was 37 years old.
Frederick R. Gillespie died in 319 West 80th Street on January 28, 1919 at the age of 74.  In reporting his death, The American Perfumer recalled that the Irish immigrant had started his career as a messenger boy.
Julia almost immediately left West 80th Street.  Arthur Cox converted the house to ten "non-housekeeping" apartments the following year.  Although the term "non-housekeeping," technically mean there could be no cooking on premises, an advertisement in the New York Herald on April 1, 1920 offered, "Two rooms, kitchenette and bath." 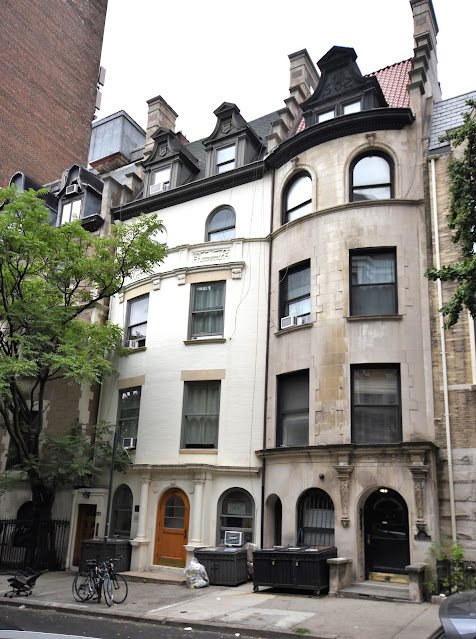 Cox retained possession of the property until December 1930, when he sold it to Adele Linder "for investment."  A renovation completed in 2005 resulted in two apartments per floor.  Expectedly, very little of Clarence F. True's 1898 interior detailing remains, nor does much of the exterior decoration.
photographs by the author
LaptrinhX.com has no authorization to reuse the content of this blog
Posted by Tom Miller at 1:00 AM