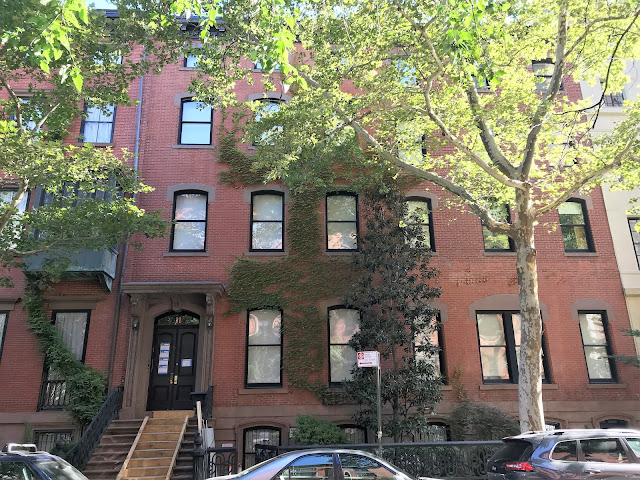 Born in Albany, New York around 1806, Richard Henry Winslow was a direct descendant of Edward Winslow, Governor of the Plymouth Colony.  He came to New York City around 1831 and went into the brokerage business.  His prominence came with the discovery of gold in California and the subsequent "great railway era."  On New Year's Day, 1849, he and James F. D. Lanier (who lived directly across the street) formed a partnership, originating the railroad bond system.  According to The New York Times later, "At this time, Western railroads hardly existed even in idea."
Investors realized large profits and by 1852 Winslow & Lanier was negotiating "$1,600,000 in a single day, while sales varying $100,000 to $500,000 a day were of common occurrence," wrote The New York Times on March 9, 1861.   The daily sales would equal more than $18 million in today's money.
In 1847 Winslow erected a 28-foot-wide home on the fashionable block of Tenth Street, between Fifth and Sixth Avenues.  His massive wealth allowed him the luxury of purchasing the vacant lot next door for his 27-foot-wide garden.  The brick-faced Greek Revival residence was three-and-a-half stories tall above a brownstone English basement.  A wide stone stoop led to the entrance, originally framed by stone pilasters upholding a substantial entablature. 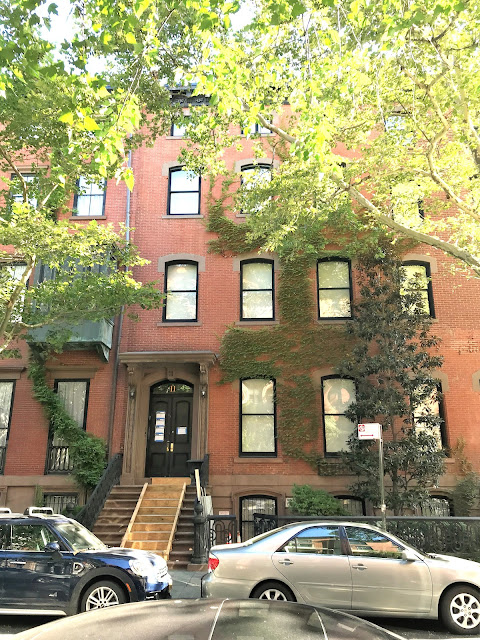 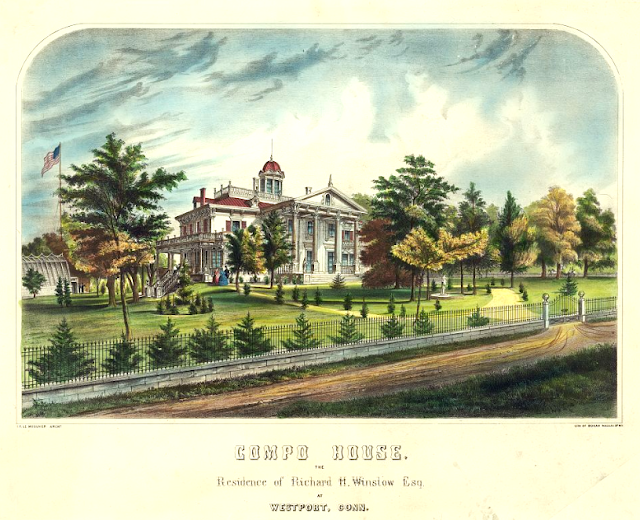 The Winslow country estate.  from the collection of the Library of Congress.
In 1856 the Winslows moved permanently to Compo House, quite possibly because of Milbank's failing health.  It forced him to retire in 1859, and, according to The New York Times, he "continued steadily to decline."  Richard Henry Winslow died at the age of 55 on February 14, 1861.
The inventory of the furnishings within the Winslow townhouse reflected the family's wealth and luxurious lifestyle.  Interesting, all the Winslow furniture was, without exception, of rosewood.  A listing in May 1857 mentioned, "Magnificent suits of rosewood furniture, richly and elaborately covered, in crimson and gold satin damask, consisting of sofas, tete-a-tetes, arm Volaire, Predue and parlor chairs, solid rosewood centre tables, beautifully carved rosewood etageres with mirror backs, rosewood seven octave pianoforte, made by Chickering," and on and on.  The inventory noted, "Billiard room--Billiard table, balls, cues, chandeliers, chairs, &c."
The house was initially leased to affluent families.  Merchant Augusts C. Richards was here in 1856 and '57, followed by Hanson K. Corning who remained a few years.  Born in Hartford, Connecticut in 1810, he was the principal in Corning, Bents & Co.  The New York Times described him as "one of the most highly respected merchants of this City."   The Cornings moved to Madison Avenue in 1861.
The house next became home to Bartholomew O'Connor and his widowed mother, Hannah.  O'Connor's father, Michael, had died around 1809.  Bartholomew was active in the Roman Catholic Church and in Irish causes.
An intimate friend of O'Connor was Irish-born Daniel Joseph Devlin, a respected businessman and City Chamberlain.  During the Civil War, he was among those who recruited and financed the Irish Brigade of the Union Army.  He, as well, helped found the Society for the Protection of Destitute Roman Catholic Children in the City of New York.  Upon Devlin's death on February 22, 1867, his body was brought to the O'Connor home, where his funeral was held.  The entire Common Council attended the ceremony.
The O'Connors moved permanently to Staten Island in 1867.  The house was leased for a year to real estate agent William Dehon King, and then to Sarah B. Cadle.
The spacious garden provided extra light and ventilation to the mansion.  A rental advertisement on April 9, 1875 described it as, "three rooms deep, windows in middle rooms; marble mantels and grates in all the rooms," and noted the garden was 27-feet by 100.
For several years it was operated as a high-end boarding house.  Mary K. Buckminster, a widow, had only four boarders in 1879 (the fewer the boarders, the more exclusive the house).  Frank Andrews was an organist, Lorenze Reich was a dealer in imported wines, W. A. Hayward was a manufacturer of "badges and medals," and Maria Phahler was a dressmaker.
The boarding house was being run by Mary Walters in 1883 when she became victim to "a boarding house raider," as described by the New York Herald.  Charles Raymond was arrested on March 31 and charged with "robbing fashionable boarding house keepers."  Well dressed and impeccably mannered, he told Mary he was arranging accommodations for his parents, who were arriving from Nebraska.  "He was particularly desirous to have comfortable apartments for his mother," said the article.  After inspecting the rooms, he rushed off to meet his parents at the train station.  It was not until then that Mary realized he had pocketed valuable items.  Raymond had repeated his scheme a dozen times before being caught.
A year later, on October 1, 1884, the house was targeted again.  James Wilson sneaked into the house "and picked up $200 worth of clothing," reported the New York Herald.  "Annie Gillen, a servant in the house, discovered him in the parlor, and, dropping his plunder, he fled, but only to run into the arms of a policeman."
The residence was again a single-family home when family of Jarvis Slade moved in.  It was also the end of the lavish garden.  In 1888, a one-story addition was added to the house, designed by eminent architect Ernest Flagg.  At the same time he updated the outdated Greek Revival architecture with a more Italianate style doorway, ironwork, and segmentally arched openings.  Perhaps because of the unlucky connotation of "13," the family now used the address 11 West 10th Street. 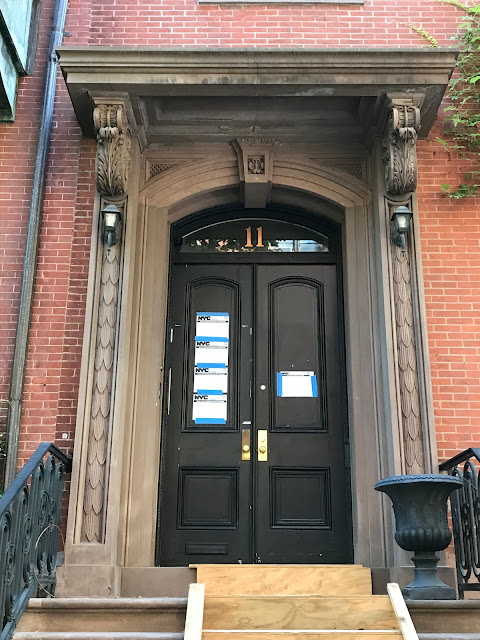 The handsome entrance was part of the 1888 remodeling.
Born in 1816, Slade "came from an old New York family," according to The New York Times.  He and his wife, the former Hannah Thomas Patten, had eight children.
Seventeen-year old Henry Lewis Slade created headlines in 1891.  He was in love with Olivia Hoe, the daughter of millionaire Robert Hoe, but, according to The Sun, "Mrs. Hoe, the girl's mother, was opposed to the match."  And so the couple sneaked away to St. Mark's Church on September 29 and "were married without notice, it is said, to their family."  Rev. Dr. J. H. Rylance knew that the bride's mother was against the marriage, but, said The Sun, "as he saw that the two were firmly decided upon marrying, and as they were of lawful age, he agreed to perform the ceremony."  The fury of Olivia Hoe's parents could only have been doubled when her sister, Laura, and Ernest Trow Carter, who came along supposedly as witnesses, were married immediately afterward.
Marshall Perry Slade graduated from Harvard in 1881.  He updated his classmates in in the Secretary's Report in 1892 saying in part, "As I have no intention of marrying, my residence will probably continue to be, for the next five years, under the parental roof at 11 West Tenth Street, New York."  He would not change his mind until seven years later at the age of 38 when he married Jane Rosetta Carson.
Hannah Patten Slade died on September 27, 1893 at the age of 68.  Her funeral was held in the 10th Street house three days later.  Another funeral would be held in the parlor just over five years later.  Jarvis Slade died on January 3, 1899 at the age of 83.  His funeral was held on January 6.
Still living in the house were Elizabeth Almy Slade, George Patten Slade and his wife, the former Cornelia Wheeler Strong.   They remained for about two years, selling it in 1901 to Joseph Smith Auerbach.  He and his wife, the former Catharine Hone, had four children, John Hone, Kathryn Hone, Helen Hone (who died in infancy), and Helen Dunscomb.  One by one, the Auerbach children were married, John in 1909, Helen in 1911, and Kathryn in 1913.
As World War I raged, in the fall of 1918 Joseph and Catharine offered up their home to the Red Cross.  On October 11, 1918 The Sun reported, "With more than 1,000 Red Cross Nurses always quartered in New York on their way to or from the front, it is necessary for Father Knickerbocker to bestir himself and show them how much he thinks of such brave women...Last night, with music and speeches and modest feasting, the new Nurses Home at 11 West Tenth street, was opened."  The article said, "It is a large house, large enough to have a big dancing room--nurses take to dancing, it seems to furnish the kind of relaxation they need.  There is a reading and writing room; and every afternoon tea will be served by the Junior League."
The Auerbachs would not return to West 10th Street.  On January 3, 1919 The Sun reported that they had sold the house to Jeremiah Milbank.  Nine years earlier the millionaire had purchased the houses at 118 and 120 West 13th Street "as a gift for the Ladies' Christian Union."  Now he did the same with the Auerbach house.  The Sun explained that the Ladies' Christian Union "is to establish a young woman's home as a memorial to Mr. Milbank's wife," adding, "The Ladies' Christian Union at present maintains five homes in the city."
Before the end of the year the one-story extension had been raised to full height, the architect closely matching the detailing of the venerable original house, including the bracketed 1888 cornice. 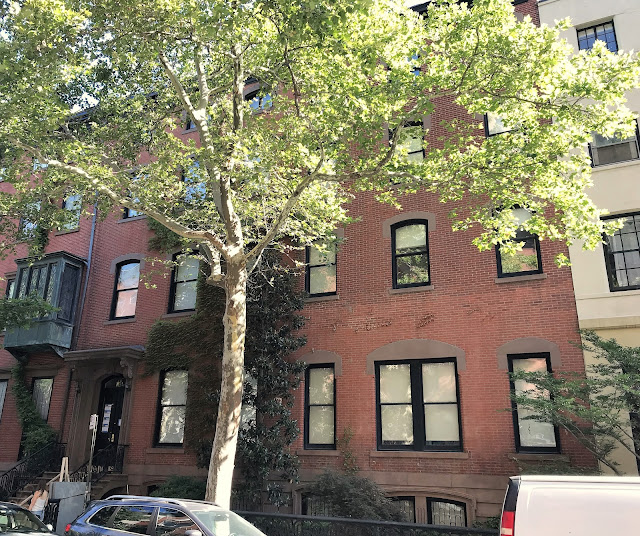 A variation in brick color testifies to the additional floors above former the one-story wing.
The facility was known as the Milbank House, and was continually run by the Ladies' Christian Union, providing housing to unmarried women until 1994.  (At which time, according to The New York Times, "$130 a week gave young businesswomen tiny rooms and served them two meals a day in elegant surroundings.")  The former mansion sat empty for two years, until New York University purchased it in June 1996 for $3.9 million to house its Global Law School program.
At the time of the sale, real estate broker Arlene Nance commented, "It has the most magnificent, sunny parlor, which should be landmarked, and a library with books donated by Irving Berlin.  Although a lot of people suggested it, [the Ladies' Christian Union] would never cut up that gorgeous twin parlor."
New York University, not necessarily known for its sympathetic treatment of historic interiors, did not greatly alter the Milbank House.  That changed after Bear Stearns executive Warren Spector and his actress wife, Margaret Whitton purchased it in 2007 for $34.5 million.
The couple renovated the massive 16,560-square-foot mansion, eliminating any hint of the 19th century in favor of clean 21st century lines and surfaces.  Spector placed the mansion on the market in 2018 at just under $60 million, reducing it to $50 million the following year.
photographs by the author
LaptrinhX.com has no authorization to reuse the content of this blog
Posted by Tom Miller at 1:00 AM