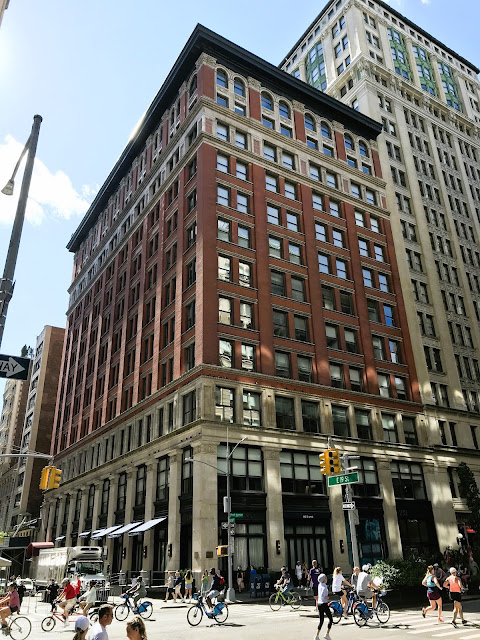 On March 16, 1889, The Evening World commented, "'The Battle of Gettysburg' cyclorama, at Fourth avenue and Nineteenth street, being almost unique in its way does not fear rivalry.  It attracts large numbers of people each day and visitors to the city appear to 'take it in' very extensively."  The massive painting, the project of artist Paul Philippoteaux, encircled the viewers with a detailed depiction of the climatic Gettysburg battle of Pickett's Charge.
The Cyclorama Building that housed the painting sat upon ground leased from the Mathews estate.  Under pressure from proprietors of the Florence apartment house next door, the lease was not renewed after its expiration in 1894.  On January 22 The New York Times remarked, "the Cyclorama Building will be removed as soon as possible."
The plot sat empty for five years.  Then, on August 12, 1899, the Real Estate Record & Guide reported that Jennie S. and John H. Parker had purchased the property.  Parker was the president of the John H. Parker Co. construction company.  The article noted that the firm "will erect a 12-story store, loft and office building on the plot."
Architect William Birkmeier designed the structure in a commercial take on Renaissance Revival.  His design featured a three-story limestone base with double-height piers.  Above the spartan, brick-faced midsection, Birkmeier relieved the visual heaviness with the ample use of stone at the 10th floor, and graceful, paired double-height arched openings at the 11th and 12th.
On June 13, 1900, The New York Times reported that Parker had sold "The Parker Building, the new twelve-story office and loft structure now nearing completion at the southeast corner of Fourth Avenue and Nineteenth Street" to a Chicago syndicate for "between $1,700,000 and $1,800,000."  The price would equal about $60 million on the higher side today.  The structure was highly touted for its fireproof qualities, including a steel skeleton.
Aside from the John H. Parker Co. offices, the building filled  mainly with firms associated with the publishing industry.  Among the early tenants was Broadway Weekly; the Judge Company, which published popular periodicals like Leslie's Weekly and Judge magazine; The Outlook; and bookbindery of Frederick C. Stegeman.  The store space was home to the Oriental rug importer Myran Karaghensian. 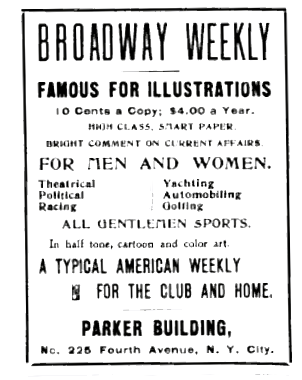 The Tammany Times, July 23, 1904
Also in the building in 1906 were the Irving Press, which shared the 11th floor with Frederick C. Stegeman; publishers P. F. Collier & Sons and D. C. Heath; and F. E. Wayne.  Oddly enough, the offices of F. E. Wayne contained "a valuable collection of art works belonging to a rich man," according to the New-York Tribune.
On the night of February 5 that year, police officer Charles Fischtel was five blocks away, on 14th Street, when he saw flames coming from the 11th floor of the Parker Building.  Because the tenants were, on the whole, publishers, the structure was filled with flammable materials like paper, ink, and machinery grease.  The New-York Tribune reported, "When the firemen arrived, they had hard work in getting to the blazing floor.  They were forced to smash down a door before they could enter the building.  Then they had difficulty in groping their way through the smoke-filed building before they reached the flames."
The fire had started in the Frederick C. Stegeman space.  Both it and the Irving Press offices were completely destroyed.  Other tenants were badly damaged by water--including the valuable paintings in Wayne's offices--but the fire itself was limited to the 11th floor. 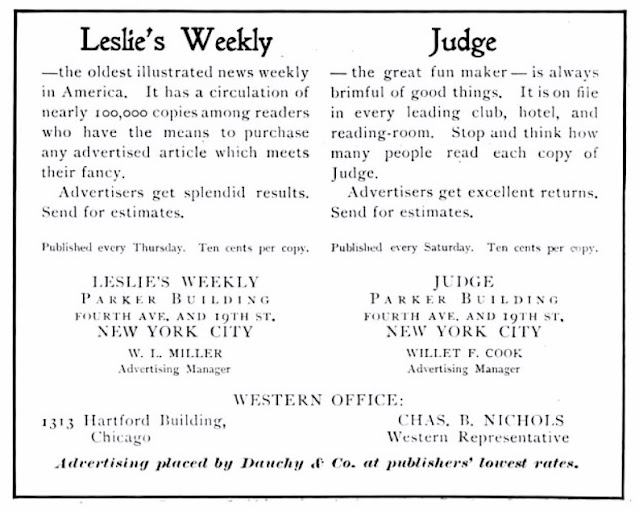 Dauchy & Company's Newspaper Catalogue, 1904 (copyright expired)
The first years of the 20th century saw the rise of extremist groups like the mafia and the Black Hand.  One of them, the Hunchakist Society, was composed of Armenians and it targeted Armenian businessmen.  On July 22, 1907 rug dealer H. S. Tavshanjian was gunned down in the lobby of the Century Building after ignoring extortion threats.  On August 4, The New York Times reported, "The deed was done with ostentatious bravado.  The next day six other prominent merchants received letters warning them that they would have to pay many thousands of dollars to escape the same fate."
Among those was Myran Karaghensian.  The letters he received demanded "$2,000 as the price of keeping Karaghensian's brother in Constantinople out of trouble," said the New-York Tribune.  Karaghensian's wife and two children had sailed for England for the summer.  Now, on August 4, the New-York Tribune reported, "owing to the recent troubles [he] had decided that the family had better be together where they could be more effectively protected."  When the family stepped off the Cunard liner Campania on August 3, Karaghensian was there to meet them.  The New-York Tribune noted, "He was accompanied by two private detectives, heavily armed."
The fire of 1906 seemed to have confirmed the fireproof qualities of the Parker Building.  But that all came into question on the evening of January 10, 1908.  At 6:30 the night watchman smelled smoke, but could not determine the origin.  Harper's Weekly reported, "It was not until eight o'clock that the crackling of flames and the thick outpouring of smoke showed that the fire was raging in the warerooms of the Detmer Woolen Company, on the sixth floor."
Fire fighters responded, but, as reported by Harper's Weekly,  "After one hour of fighting the blaze had spread throughout the building above the fourth floor, and there was no hope of extinguishing it.  To make matters worse, much of the fire department's hose was rotten.  "Forty-five lengths of hose burst," said the article.  At one point, a heavy printing press "went crashing down with the force of a gigantic projectile, rending and crushing everything in its way to the cellar."  Along with the press and other debris, two fire fighters and one insurance patrolman were "swept down to torture and death under the mass of glowing steel."  Fifty fire fighters "came tumbling out upon Fourth Avenue" following the collapse, and no further effort to fight the blaze from within the building was made. 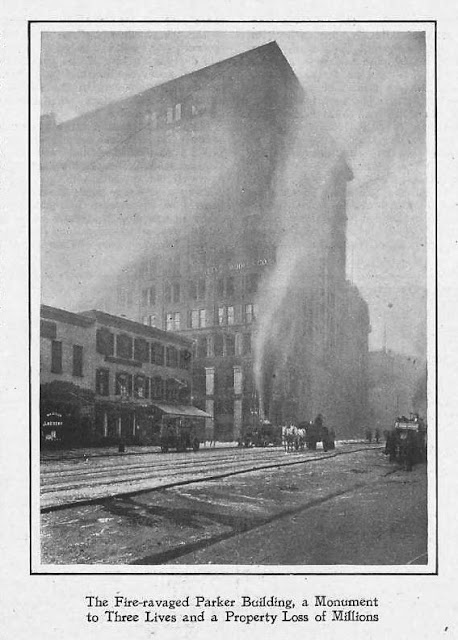 Harper's Weekly, February 1, 1908 (copyright expired)
Three days later, The Evening World reported that Fire Chief Croker "to-day declared the steel skeleton remaining after the fire to be perfectly safe.  Upon this declaration a gang of fifty workmen went to work in the ruins of the ground floor to recover the bodies of the three firemen who are still missing."  In the meantime, heavy timbers were placed over Fourth Avenue between 18th and 19th Streets to ensure that the street would not collapse into the subway should the exterior walls of the Parker Building--all that remained--crumble. 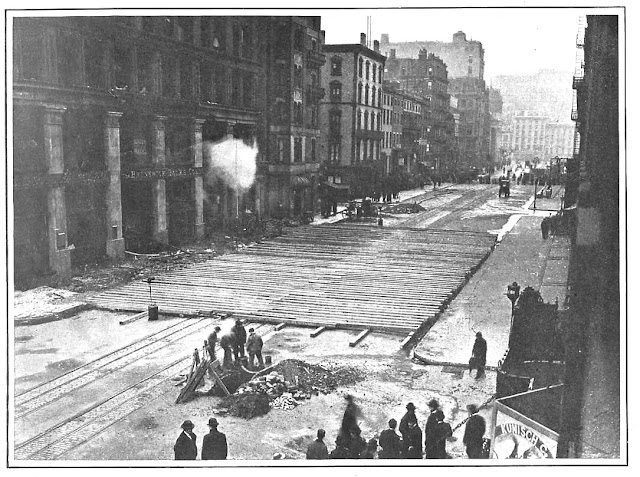 Workmen erect a platform of timbers to protect the subway.  Harper's Weekly, February 1, 1908 (copyright expired)
William Birkmire's steel frame construction had survived the inferno.  Had it not been for the delay in discovering it and the fire department's shoddy equipment, the outcome may have been far different.  Newspapers were unforgiving.  On January 18, 1908 The Evening World wrote, "Fire Commissioner Lantry and Chief Croker...refuse to accept the responsibility for the rotten hose and the lack of water pressure which made the Parker Building fire such a disaster."
The burned-out shell of the Parker Building was auctioned in April 1906.  Purchased by the Pocono Building Co., it sat for three years before the architectural firm of R. H. Robertson & Son was hired to reconstruct it.  Architects' and Builders' Magazine noted, "The new structure is to be known as the Pocono, and the builders expect its completion about February 1, 1910."  The two southernmost bays of the building were taken down, "so that the frontage is reduced from 121 feet to 82 feet," said the article.  The magazine stressed that the reconstructed building would be "built strictly within the requirements of our present laws [and] will be a thoroughly fire-proof structure." 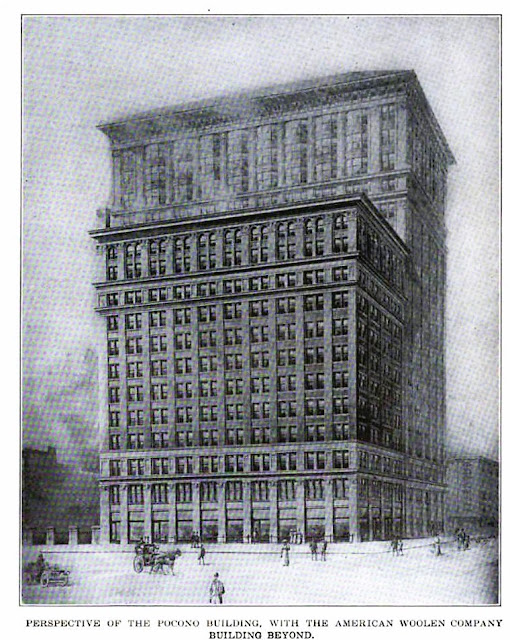 R. H. Robertson & Son released this rendering of the slightly reduced, reconstructed building in 1909.  Architects' & Builders' Magazine, November 1909 (copyright expired)
The tenants of the rebuilt structure were mostly apparel-related.  Among the first were silk merchants M. C. Migel & Co., the American Hosiery Co., and Robishon & Peckham Co., makers of underwear.
Brothers Joseph and William Sydemen operated the Sydemen Rubber Company with partner Joseph Wood.  The firm landed a lucrative contract following the nation's entry into World War I.  Patriotic Americans were no doubt shocked when they read on July 23, 1918 that all three men had been arrested "on charges of fraud, bribery and conspiracy in connection with war contracts to supply raincoats for Pershing's men," according to the New-York Tribune.  The newspaper explained, "The indictments charge the manufacturers with paying money to inspectors to have defective raincoats intended for the army passed as perfect."
Another tenant involved with the war was the Patriotic Yarn Association.  On January 26, 1918 the New-York Tribune reported that the group "is receiving a generous supply of knitting wool every day for the individual knitter who wants to make sweaters and other garments for the soldiers and sailors."  The group supplied the wool at low cost to the knitters.  "The association does not require the purchaser of yarn to bring back the finished garment, though she is required to sign a pledge stating that she is knitting for American or Allied troops."
The Pocono Company made renovations to the building in 1922.  Interestingly, it once again became home to several book-related firms.  Among them were the Garnder-Moffat Company, Inc., which published Who's Who in American Aeronautica that year; and W. D. Harper, Inc., a paper distributing firm founded by William D. Harper.  He was the grandson of Fletcher Harper, one of the four original brothers of the publishing house, Harper Brothers.
Change began in the 1950's when more institutional tenants began moving in.  In March 1957 the nonprofit Group Health Insurance, Inc. leased an entire floor.  The tenants would have to reprint their letterhead in 1959, when Fourth Avenue was renamed Park Avenue South.  Soon afterward the International Rescue Committee, formed in 1933 to help political escapees from foreign dictatorships, moved in.  By 1964 the Community Council of Greater New York had its headquarters in the building, and would remain into the 1990's.
In April 1994 Baruch College, a branch of the City University of New York, signed a 10-year lease for 75,000 square feet--the entire 7th, 8th and 19th floors.  The school used the additional space "for new classrooms, a cafeteria and computer operations," said The New York Times on April 20.
Following the attack on the World Trade Center, the Port Authority moved its headquarters into the building.  Here a tattered 8-by-12-foot American flag, rescued from the ruins, hung in honor.  The agency returned downtown, to 4 World Trade Center, in March of 2015. 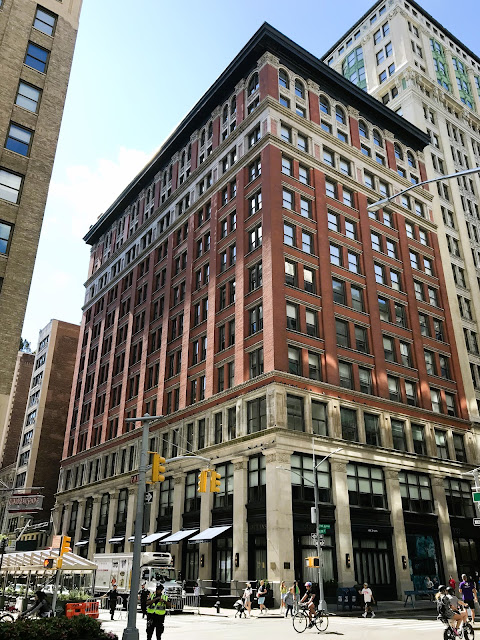 Carefully maintained, the former Parker Building gives today's passerby no hint that it was the scene of one of Manhattan's most dramatic and controversial fires in the early 20th century.
photograph by the author
no permission to reuse the content of this blog has been granted to LaptrinhX.com
Posted by Tom Miller at 1:00 AM