The Thomas Faye family had purchased the land at 810 Broadway in 1820.  By the 1890's their former residence, like the other once elegant homes in the area, had been converted for business.  When it was sold in June 1906, the Record & Guide commented, "This is the first time the property has changed hands in 86 years."

The buyer, Samuel Mandel, was president of the Apartment Construction Co.  But this site was not destined for an apartment building.  On February 2, 1907, the Record & Guide reported that the architectural firm of Rouse & Goldstone was designing an "8-story loft building" to cost $150,000 (or about $4.25 million today).
Completed before year's end, the building was a commercial take on the French Gothic style.  Now nine stories with the mansard roof, its tripartite design included a two-story, cast iron storefront with vast show windows.  The iron-framed windows of the four-story mid-section created, essentially, a glass wall framed by an elliptical arch.    Stylized Gothic elements decorated the top section--heraldic shields, pinnacles, and a fluttering, carved banner below the eighth-floor cornice. 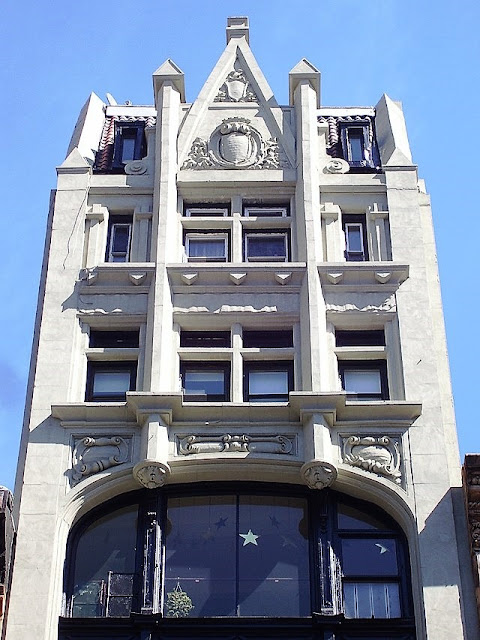 photo by Beyond My Ken
Many of the initial tenants were involved in the millinery business, including Judd & Co., Spear & Co., Charles S. Merton & Co., and the Silk Web Hat Band Co.  One, however, that was definitely not hat-related was the Direct Line Telephone Company of San Francisco, which leased the third floor. 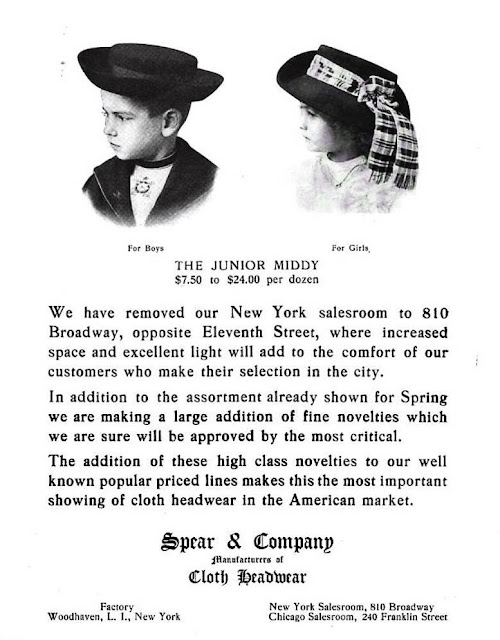 Spear & Company, which manufactured "motor and outing caps," was typical of the original tenants.  The American Hatter, January 1908 (copyright expired)
In 1912 "Willoughby and a Square Deal" had operated nearby at 814 Broadway for years.  On March 27 that year, the Bulletin of Photography reported, "The increasing business of 'Willoughby and a Square Deal' is responsible for his having to move to a new location.  Three floors will be occupied at 810 Broadway, New York City, after May 1st."
Willoughby was among the best known of the New York City photographic equipment and supply retailers.  One item he introduced soon after moving into 810 Broadway innovated photographic printing.  A description of the Ware Automatic Printing Machine in the Bulletin of Photography sounds far ahead of its time.  By using electric light, the machine "always makes the same exposure unless the indicator is changed; therefore, every print has a uniform color."  The article promised, "Vignetting, dodging, and doctoring of negatives is easily accomplished by a very unique method...The incandescent arc or Cooper-Hewitt light is recommended." 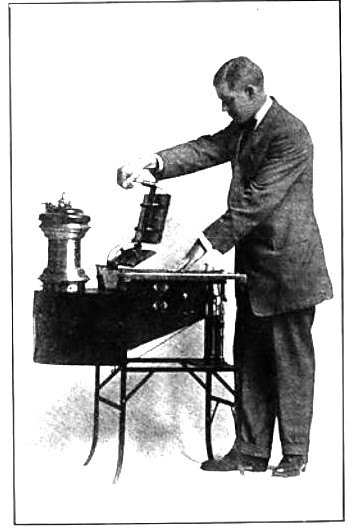 A model demonstrates the Ware Automatic Printing Machine.  Bulletin of Photography, May 1, 1912 (copyright expired)
Like the automatic printing machine, Willoughby kept up with the changing trends.  In its "Things New Photographic" section in August 1914, The Camera wrote, "If you use a motion-picture camera you ought to buy your film from Willoughby, 810 Broadway, New York City."

Abel's Photographic Weekly, November 8, 1913 (copyright expired)
Another tenant who kept up with the times was Golland Sons & Co., here by 1915.  The firm was listed in The Automobile Trade Directory that year for manufacturing "motorists' clothing."
Charles G. Willoughby moved his business to the Herald Square district in the fall of 1916.  Still in 810 Broadway was an original tenant, Charles S. Merton & Co.  That year it marketed its "sports hats," to the modern woman.  One ad told retailers, "they give you the right sort of hat to sell for Autoing, Golfing, Skating, Woods Wear, Tennis, Summer Resort Wear, for Travelling, for the Rainy Day, etc." 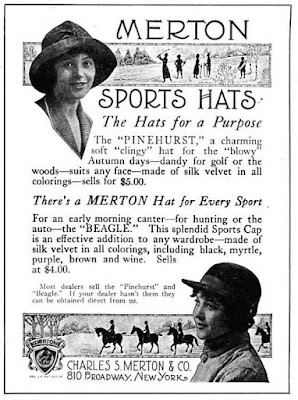 The Millinery Trade Review, October 1916 (copyright expired)
Following World War I, Finkelstein & Maisel took the second floor for its factory and showrooms.  The firm was a wholesale manufacturer of "men's and young men's fine clothing."  In 1921 workers of several other apparel firms went on strike.  Labor troubles in the first half of the 20th century often involved violence and intimidation, and this instance would be no different.
On May 26, a "committee" from the Amalgamated Clothing Workers of America strode in and demanded Finkelstein & Maisel "to throw open all its books, ledgers and even bank accounts to inspection...in order that it might be learned whether or not the firm had been manufacturing clothes for any firm against which a strike is in force."  Abraham Finkelstein, the head of the firm, was incensed and ordered the men out, declaring he "would never consent to such arbitrary interference with his business."  He told a reporter from the New York Herald, "If we lived in Russia, I would understand such high handed methods.  But here in New York City it would seem impossible that such things could happen."
Finkelstein had always employed union employees and paid union wages.  Nevertheless, after he told an Amalgamated official "just what I thought of the demand," his 500 workers were ordered off the job by the union.  Finkelstein complained, "Their only answer was to call out all my workmen, who haven't the faintest idea why they are not allowed to work."
The building was updated in 1932 by architect Elwood Hughes.  The second story store space was now an additional factory floor. 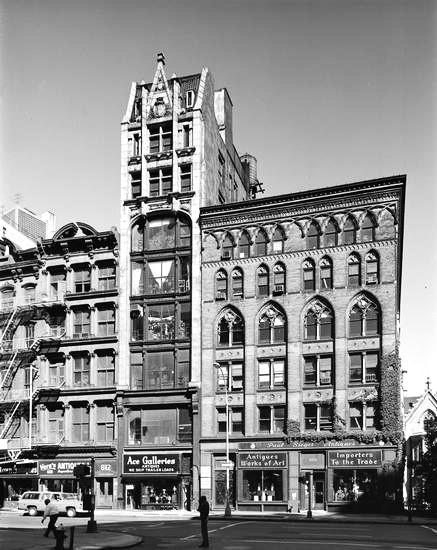 Edmund Vincent Gillon photographed the building around 1978.  from the collection of the Museum of the City of New York
In the late 1960's and early 1970's, the ground floor space was home to the Andrew Murphy Bar & Grill.  It was replaced around 1979 by the Ace Galleries, which sold a wide variety of goods, including "antiques, furniture, Oriental/Chinese rugs, silver and paintings," according to an ad in New York Magazine on March 26, 1979.  The changing neighborhood was affecting the tenant list upstairs as well.  In 1977 one of the former factory lofts was now the art studio of Fay Lansner and Phillip Pavia. 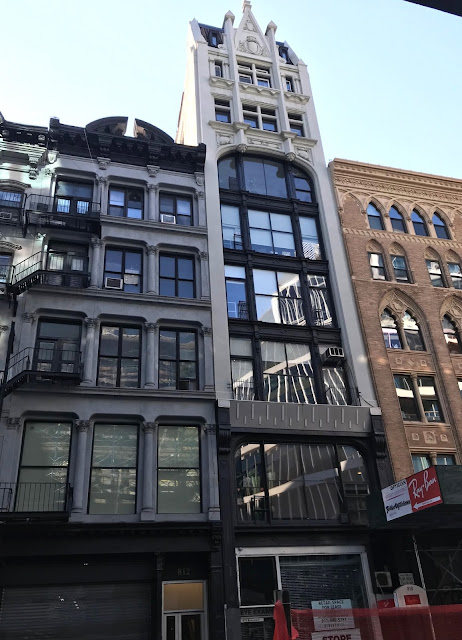 Major change came in 2000 when a renovation resulted in one apartment on each of the upper floors.  But through it all, Rouse & Goldstone's 1907 exterior design has survived virtually intact.
photographs by the author
no permission to reuse the content of this blog has been granted to LaptrinhX.com
Posted by Tom Miller at 1:00 AM