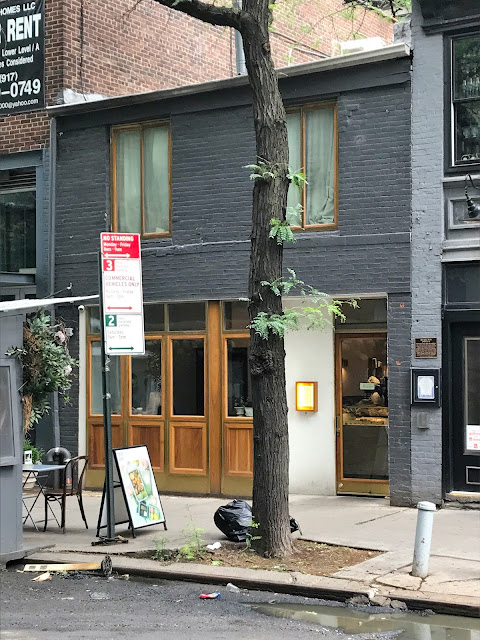 As late as 1859, a 20-foot-wide house stood at 15 East 13th Street, between Fifth Avenue and University Place.  But around 1861 the Smith family had replaced it with a three-story livery stable.  Faced in brick, it originally would have had centered bay doors on the ground floor, two loft openings on the second for hoisting hay and heavier supplies, and space for at least one employee to live.  Behind the building, as with all stables, was an odorous manure pit.
The proprietors routinely worked with their customers to help sell vehicles or horses they no longer needed.  On July 3, 1868, for instance, an advertisement in the New York Herald offered, "For Sale--Four handsome Shetland ponies, kind, gentle and well broken to saddle or harness," and on February 12, 1876 an ad read, "For Sale, 2 horses, 1 Hamiltonian mare, 1 Canadian pony."
The latter sale was possibly the last.  That year the stable building was converted for business purposes.  It became home to a painting company run by a man named Doubleday, and the carpentry shop of Daniel Mitchell, who lived on West 41st Street.

By 1890 John Williams ran the carpentry shop.  The other tenant was a small silverplating business.  Williams was apparently doing well, and in October 1892 was looking to expand his staff.  His advertisement read, "Two good jobbing carpenters wanted."  (Jobbing carpenters were given jobs that they could complete without direct supervision.)
The silver firm, which presumably operated from the upper floors, was the scene of a tragedy on March 12, 1891.  Eighteen-year-old John Freeman worked there as a clerk and, apparently, had the duty of shutting down the shop at the end of the day.  He reached over to turn off a dynamo which ran the machinery, and, according to the Troy Daily Times, "his body came in contact with the machine.  He dropped dead in his tracks."
In September 1892 John Williams sold his lease to Bebbington & Bollard, run by Samuel Bebbington and Washington L. Bollard.  It appears they were concerned about security during their set-up period, and on October 8 advertised, "Wanted--For temporary: watchmen, official stands, capable men; none but responsible and experienced parties need apply.  Bebbington & Bollard, 15 East 13th st."
The little building continued to see a turnover in tenants.  In 1895 the carpenter shop of Corbett & Peterson moved in, but on August 5, 1897 advertised, "Carpenter Business for sale; two years' lease; machinery; cause, sickness."  The space became home to Graham Brothers, electricians.  It advertised "motor and dynamo repairs and supplies.  Motors inspected and maintained by contract."
A rather unexpected tenant, dressmaker Juliette Tallet, was in the building in 1907.  Despite operating from a converted stables, she catered to the carriage trade.  The high-end fashions she created were reflected in a law suit she brought against English musician Archibald Robinson that year.  She claimed she had "made a silk dress for Mrs. Robinson, the price being $500, but never had received the money."  The cost would translate to more than $15,000 today.
John Gordon took space in the building around the same time.  A mason and builder, he branched into real estate development in 1911, leasing the Billopp estate on Staten Island, described by The Sun as "the most historical spot on the island."  On March 28 the newspaper reported, "The name of this man and what he proposed to do with the property did not develop until yesterday, when it became known that John Gordon, a mason and builder at 15 East Thirteenth street, this city, was the lessee and that he proposed using the property as a summer bungalow colony."
The estate was historic, indeed.  The centerpiece of the 200-acre grounds (originally 1,100 acres) was Bentley Manor, built for Captain Christopher Billopp prior to 1680.  The Sun said the stone house "is with little variation just as it was when Billop [sic], who was a sailor, used to sit on his porch and survey the broad expanse of the Lower Bay on the south and Raritan Bay on the west.  It was Billop [sic] who in his ship, the Bentley, sailed around Staten Island in a day, thereby making it a part of the State of New York."
Bentley Manor was historically important for other reasons, as well.  It was here that Lord Howe of the British army met with members of the Continental Congress, including Benjamin Frankin, John Adams, and John Rutledge, after the Battle of Long Island to discuss a peace proposal.
Happily, and somewhat unexpectedly, John Gordon preserved the venerable mansion.  He grouped his cottages around Bentley Manor, making it the focal point.  Even before ground was broken, on July 1, 1911 he advertised:

When William P. Goldman & Bros, clothing manufacturers, purchased the building and the one next door at 13 East 15th Street  from the estate of U. J. Smith in June 1920, the Real Estate Record & Builders' Guide commented that it was the first sale of the property "since before the Civil War and [the buildings] were formerly private stables."
The buyers held the properties only for a year, selling in July 1921.  In the interim, they had lopped off the third floor of 15 East 13th Street.
The building became home to the Rotograph Co. at the end of 1933.  The printing firm catered to left-leaning political groups, and advertised in the Communist newspaper The Daily Worker. 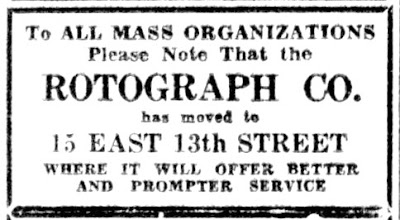 The Daily Worker, December 13, 1933
Among the publications printed here were the New Pioneer and Health and Hygiene, the title of which gave little hint to its contents.  But it drew the attention of the Special Committee on Un-American Activities of the House of Representatives in 1938.
Among the questions Representative Harold Gerard Mosier asked Ralph de Sola on the stand was, "For a few months you were managing editor of Health and Hygiene, which was edited at the offices of the Communist Party, as one of its publications was it not?"
De Sola, who had edited the publication under the pseudonym of John Edward Gray, replied, "It was edited in the same structure where the Communist offices were, 15 East Thirteenth Street."
Having already stepped away from the Community Party, De Sola was forthcoming in his testimony.  He explained in detail how the New Pioneer targeted school children without using party labels.

For example, in the back issues of the New Pioneer, if you will search them, you will find stories which will prove that George Washington was a reactionary, that while Lincoln had a part in the Civil War in freeing the slaves, he was nothing more than a middle class lawyer and really created a situation which split the country up further and removed the slaves from a feudal ownership and transferred them to an economic ownership; and so forth.

The dawn of the 21st century saw a much different type of tenant.  Marquet Patisserie was included in Robert Sietsema's 2004 The Food Lover's Guide to the Best Ethnic Eating in New York City, who said, "This reasonably priced patisserie might have been transported from Paris." 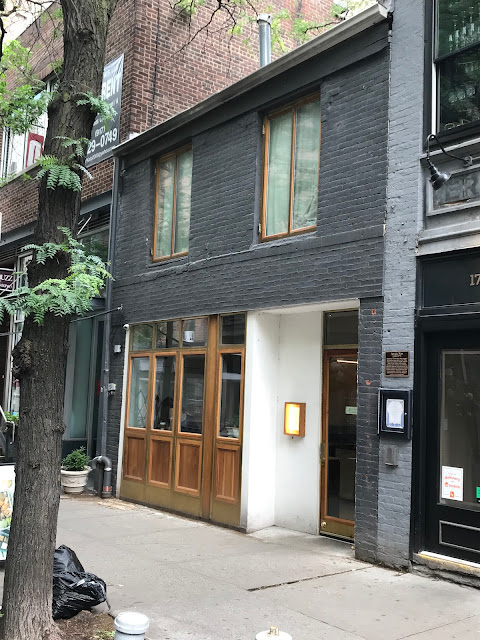 Today the building is home to Patisserie Fouet.  Despite its many incarnations and renovations, the little building still exhibits its humble roots as a pre-Civil War stables.
photographs by the author
no permission to reuse the content of this blog has been granted to LaptrinhX.com
Posted by Tom Miller at 1:00 AM