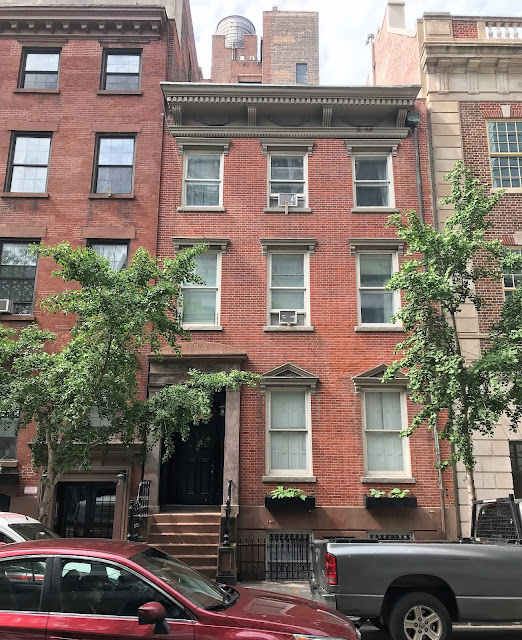 In 1836 Dr. John Wakefield Francis and his wife, the former Maria Eliza Cutler, purchased the vacant lot at 57 East 17th Street (later renumbered 104) from Isaac Green Pearson and his wife Eliza.  The plot sat half a block from Union Square--the exclusive residential enclave that developer Samuel Ruggles had begun work on two years earlier.
John and Maria Francis immediately began construction of a fine, 26-foot wide home.  Completed the following year, the Greek Revival style house rose three stories above a brownstone-clad English basement.  Clad in red brick and trimmed in brownstone, it exhibited the design elements of the new style--heavy stone pilasters on either side of the entrance that upheld a substantial entablature, plain sills and lintels, and a modest, bracketed cornice.
John Wakefield Francis was a well-known obstetrician and a would be a founder of the New York Academy of Medicine.  The couple's two sons, Valentine Mott Francis and Samuel Ward Francis would also go into medicine.  Samuel would become an inventor, as well.  Among his creative inventions were a cane with a hidden compartment for coins, a toothbrush with rubber bristles, and a toothed spoon--what today we know as the spork.
The Francis family apparently never lived in the East 17th house, but rented it.  In 1847 they were still living at 1 Bond Street.  That year John S. Winthrop, Jr., a broker with Prime, Ward & King, was renting the 17th Street house.  He moved permanently to North Carolina around 1848, at which time Joseph and Grace W. Ogden leased the house.
The founder of a successful shipping firm, Ogden was a director in several firms, like the Mutual Insurance Co., and the Nicaragua Transit Company.  Grace came from a  socially prominent family.  Her father, Jonathan Ogden, had founded the shipping firm of Ogden, Ferguson & Co., and was a director of the Merchants' Bank.  The couple would remain in the house for a decade.
In 1859, the year the Ogdens left, title to the East 17th Street house was transferred to Dr. Samuel Ward Francis.  As his parents had done, he continued to lease it.  The next tenants were the notable Eigenbrodt family, here in 1860.
Sarah Eigenbrodt was the widow of the Rev. Dr. Lewis Ernest Andrew Eigenbrodt, who had died in 1828.  Born in Germany, he had come to America in 1793.  The esteemed minister had delivered an oration at George Washington's funeral in 1799. For 11 years he was a warden of Grace Church.
Three of Sarah's children, Dr. David Lamberson, Rev. William Ernest, and Sarah, moved into the house with her.  Her other son, Charles S. Eigenbrodt, had gone to California in 1849 during the Gold Rush.  (Charles would die fighting in the Civil War on August 25, 1864.)
William followed closely in his father's professional footsteps.  Two years after the family moved into the 17th Street house, he became a professor of "pastoral theology" in the General Theological Seminary, and would later donate Eigenbrodt Hall to that institution.   (The affluence of the Eigenbrodt family was reflected in William's will.  Upon his death in 1894, he left $250,000 each to the Seminary and to Trinity School.)
Sarah died at the age of 75 on July 26, 1863.  Her funeral was not held in the house, as might have been expected, but at St. Clement's Church in Greenwich Village.
That year Samuel Ward Francis transferred title to the house to his brother, Dr. Valentine Mott Francis, and his wife, the former Anna Mercer.  Like his brother, Valentine was a man of several talents, and that same year he published his lengthy poem The Fight for the Union.
The Eigenbrodt siblings remained at 104 East 17th Street until 1868, when Francis leased it to the family of Levi and Jane Bissell.  Listed in directories as a machinist, Bissell was more accurately described as a mechanical engineer.  In 1857 he was granted a patent "for improvement in trucks for locomotives," described in the 1890 The Engineer's Encyclopaedia as "an 'Air Spring' which...was destined to be a cheap, effective and perpetual spring."
The Bissell's two children, William H. and Sarah E. both became physicians.  They may have been influenced by Dr. Arthur F. Bissell, presumably an uncle, who initially lived with the family here.
After having been in the Francis family for half a century, the house was sold to John and Harriet S. Biddle in 1878.  Upon the end of the Bissell's lease, they moved in in 1881.
John Biddle was the head of the Biddle Piano Co., established in 1860.  Astonishingly, he had started his career as "a semi-blind music teacher who opened a store in Varick street," according to The Music Review decades later.  He was also a director of the First National Bank of Port Jefferson, Long Island, where the family maintained its country home. 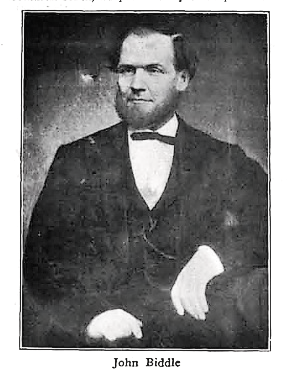 The Music Trade Review, June 2, 1923 (copyright expired)
In 1888 the Biddles enlarged and updated the residence.  Builder Walter Jones erected an extension in the rear, and it was most likely at this time that Renaissance Revival details were added to the front--triangular pediments above the parlor windows and entrance, bracketed lintels above the upper floor openings, and a handsome cast metal cornice. 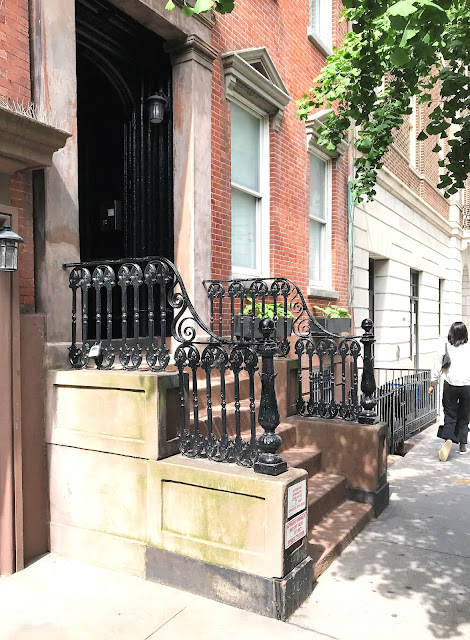 The exquisite stoop railings were part of the 1888 updating.
On December 17, 1902, Harriet Biddle died "suddenly."  It was a term which often suggested a heart attack.  Her casket sat in the parlor until her funeral on December 20.
John Biddle remained here until 1904 when he sold 104 East 17th Street to Charles Mayer, a partner in the underwear firm of M. & C. Mayer at 568 Broadway.  Living with him were Charles Mayer (presumably a relative) and Florence E. Goddard.  Mayer's residency would be relatively short lived.  He became ill in 1908 and died in the house on January 18, 1909.
A bachelor, he had been generous to his employees in his will.  He left $6,000 to be divided among the 15 employees who had been with him for at least 12 years (more than $11,700 each in today's money), and $25 to each of the other workers.  The rest of the sizable estate was divided among charities and family members.  To his brother and his business partner Max W. Mayer he left the equivalent of just under $300,000 today, and to Max's daughter, Alice, half that amount.
The will left the title to 104 East 17th Street in equal shares to Charles Mayer and Florence Goddard.  They rented the house the following year to a stockbroker appropriately named Coin.  In 1918 John Gianelli leased it "for a term of years."  The once exclusive tone of the neighborhood had greatly changed by now, with Union Square no longer being ringed with mansions, but with business buildings.  Gianelli operated the property as a "lodging house."
Among his initial tenants was T. Everett Harre, a journalist, author, and the head of The National Civic Federation.  Among his books were the Heavenly Sinner, a romanticized biography of Lola Montez, The Eternal Maiden, Behold the Woman! and One Hour--and Forever.
A less respectable tenant was Sigmund Rosenfelt, known as "Beansy."  In February 1922 he was out on bail, having been indicted on Federal charges for "wholesale dealing in fraudulent liquor permits."  Only two months earlier he had been released from a New Jersey prison, having been convicted there for running a chain of illegal gambling houses.
On February 7, 1922 he was taken to a sanitarium on West 77th Street, suffering from pneumonia.  The Evening World commented, "Rosenfelt has been living at John Gianelli's, No. 104 East 17th Street."  The 49-year-old racketeer would not return.  He died three days later.  In reporting his death, the New-York Tribune recalled, "For many years he had a place on West Fourteenth Street.  In the scramble for up-town gambling profits, which gave rise to the 'Gamblers' War,' Rosenfeld was as successful as most of the combatants."
The Evening World added, "Short, rotund, baldheaded, suave and imperturbable, Rosenfeld was typical of the school of gamblers which grew to wealth and maturity on Second Avenue, and then invaded richer if more difficult hunting grounds for the money of the uptown venturesome and foolish."
It appears that Charles Mayer was deceased by 1931, when Florence Goddard-Todd sold 104 East 17th Street to the Planet Realty Co.   The firm converted the property to apartments.
The residents over the subsequent decades were middle class professionals, like Charles Keith.  Born in Vermont, he had started out life as a merchant seaman in the 1930's.  But a disagreement between him and the Maritime Union resulted in his resignation to become a house painter in Greenwich Village.
House painting soon took back seat to war.  While fighting in the Spanish Civil War against the Francisco Franco forces he was wounded and captured.  And then, during World War II, he served on a ship that was torpedoed.  Keith survived both conflicts and returned to New York to buy and rehabilitate buildings, most of them residential--what today we would call a house flipper.  Following his death while living here in February 1973, The New York Times said, "He became very successful."
Around 1990 the triangular pediment over the entrance was replaced with a flat, arched slab with the address inscribed on it.  Today there are six apartments within the building, the outward appearance of which is little changed since the Biddles' 1888 updating.
photographs by the author
no permission to reuse the content of this blog has been granted to LaptrinhX.com
Posted by Tom Miller at 1:00 AM