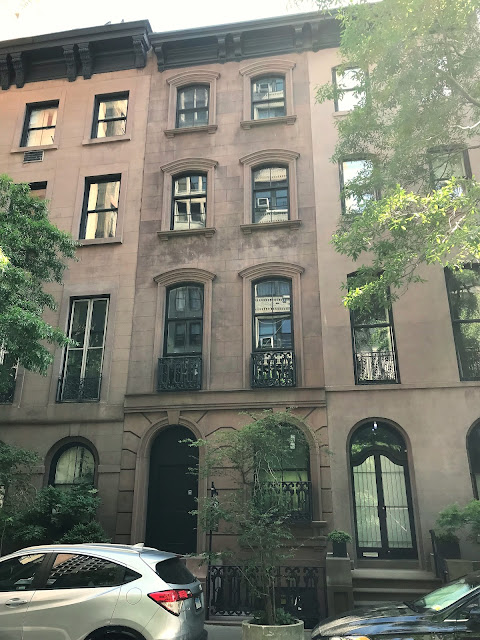 In 1855, former Congressman and New York State Attorney General Thomas J. Oakley erected two narrow, Anglo-Italian houses at 65 and 67 East 19th Street, directly behind his own mansion on Gramercy Park.  Each two bays wide and four stories tall, they were clad in brownstone.  The openings within the rusticated first floor were fully arched.   Those on the upper floors were segmentally arched and wore handsome molded lintels.  The two residences shared a continuous cornice.

Morris Ketchum Jesup leased 65 East 19th Street (renumbered 111 in 1866) from Oakley.  Born in Westport, Connecticut in 1830, he was a partner in the banking firm of Clark & Jesup.  Four years before moving into the East 19th Street house, he married Maria Van Antwerp De Witt, daughter of the Reverend Thomas De Witt of the Collegiate Dutch Church.  Maria came from an old Colonial family.  The couple, who would have no children, maintained a country home, Belvoir Terrace, in Lenox, Massachusetts.
For a year, in 1861 and '62, Morris's brother, James Riley Jesup, lived with the couple.  He was described by the 1898 Prominent Families of New York as "a leading member of the bar."
On July 11, 1863 the nation’s first attempt at a military draft played out in New York with a lottery.  To avoid service, the wealthy were permitted to purchase exemptions for themselves or their sons to avoid fighting in the Civil War.  And despite the resultant Draft Riots--a bloody three-day reign of terror and carnage unlike anything seen in the country before--the policy continued.  On September 4, 1864, The New York Times titled an article, "Substitutes in Advance of the Draft," and listed among those providing a paid stand-in "Morris K. Jessup [sic], 65 East 19th-st."
Morris K. Jesup, from the collection of the Library of Congress
Jesup's avoidance of military duty was, perhaps, balanced by his organizing of the United States Christian Commission, which helped provide care for wounded soldiers.  He had already, in 1860, helped to found the Five Points House of Industry in New York to help immigrants, and over the course of his life would donate massive amounts of money to the poor, both in America and abroad.
Thomas J. Oakley had died on May 11, 1857, but the house remained in the family.  His daughter, Matilda Cruger Oakley, who would marry the millionaire William Rhinelander, would eventually inherit the property.
The Jesups left East 19th Street around 1868.  The house was next leased by the Rev. William Tufnell Sabine, of the Church of the Atonement on Madison Avenue at 28th Street.
Born in New York City on October 16, 1838, he graduated from Columbia College in 1859, and from the General Theological Seminary three years later.  In 1868 he married Theresa Schieffelin, who came from one of New York's most socially elite families.  The couple, who would eventually have seven children, had a country estate in New Lyme, Connecticut. 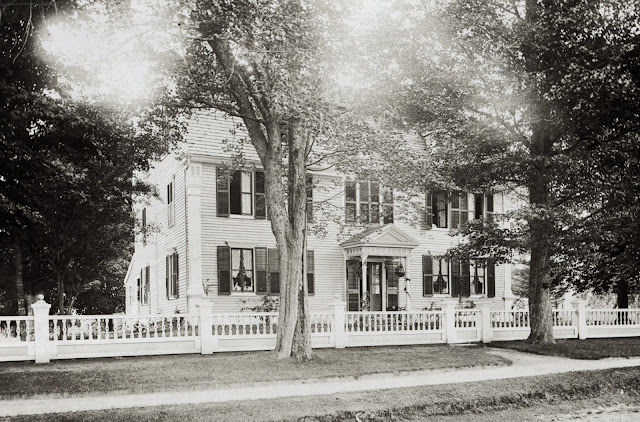 The Sabine's country home was erected around 1795.  from the collection of the Florence Griswold Museum
Although Sabine would be elevated to a bishop in 1902, it was a single decision for which he would forever be remembered.  The well-known actor George Holland died in December 1870.  Following his funeral, The New York Times headlined an article on December 29, "Pharisaical Delicacy," and reported that Joseph Jefferson, an equally famous actor, had gone to the Church of the Atonement on the suggestion of one of Holland's female relatives.  While Rev. Sabine was in the course of making the arrangements, Jefferson happened to mention that Holland had been an actor.
On hearing this announcement, Rev. Mr. Sabine immediately exclaimed that he strongly objected to officiating at the funeral if such was the case.  Instead of complying with the request he referred his visitor to the Episcopal Church of the Transfiguration in East Twenty-ninth-street, near Fifth-avenue, which he spoke of 'the little church around the corner,' telling him at the same time that they might 'do it [i.e., the funeral service].

The article said Jefferson left "with his feelings greatly shocked."  Forever more, the Church of the Transfiguration would be popularly known as The Little Church Around the Corner (so much so, in fact, that many people forgot the true name), and it became the unofficial church of the theatrical community.
The Sabines remained in the East 19th Street house until around 1880.  It had a series of occupants over the next few decades.  On December 14, 1888, The Evening World announced, "Private funeral services over the remains of the late Lyman Fisk, the retired hotel-keeper, were held this morning at the family residence, 111 East Nineteenth street."

Living here by the mid-1890's was designer W. Howard Bartle, who specialized in book covers.  Like many financially-comfortable men and women in the 1890's, he enjoyed bicycling, and in May 1897 the Cyclist's Touring Club Gazette he had joined the world-wide organization.  Based in England, the club was open to amateur cyclist world-wide.  He remained here at least through 1900. 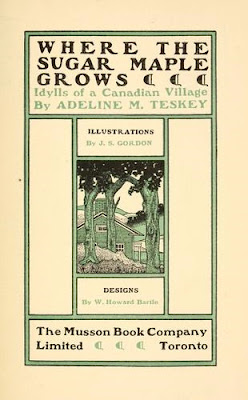 Bartle designed this cover in 1901.  (copyright expired)
Another artist, muralist T. Gilbert White, leased the house after Bartle.  He was living here in 1911 when he executed the murals Discovery of Kentucky and Treaty of Sycamore Shoals of the Wautauga River for the Kentucky State Capitol building.
Matilda Rhinelander died in 1914 and the following year 111 East 19th Street was offered for sale.  The advertisement described it as a "four-story private dwelling; twelve rooms and three baths; all improvements; excellent order."
It became a social hot spot after it was purchased by Ed Alford toward the end of the Great Depression.  Known for his lavish entertaining and diverse guest lists, there seems to have been little quiet time in his home.  On November 27, 1948, for example, The New York Age reported, "We're willing to wager our last shirt that just about the grooviest affair this coming Sunday will be the cocktail shindig the Virgin Islanders of NYC are pitching at the spacious home of Ed Alford, 111 East 19th St. for the St. Thomas PAL Xmas party for underprivileged kids in the Virgin Islands."
On May 7, 1953 Jet magazine reported, "The decision of Back Bay Boston dilettante Ed Alford to sell his New York house and take a prolonged world tour writes 'finis' to an era of gracious entertaining.  For years the East 19th Street mansion has been the scene of the town's smartest interracial parties...It also has given rise to some of Gotham's choicest chit-chat as personalities vied for top favor with the wealthy and generous patron of arts." 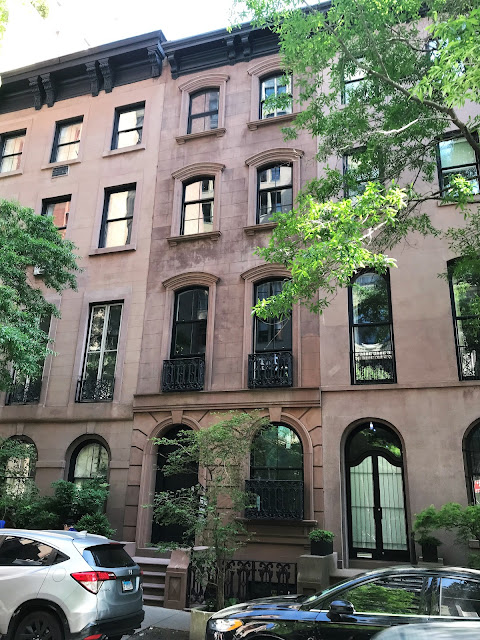 Although it was never converted to apartments, the house has little surviving original detailing inside.  The exterior, however, is remarkably preserved.  The six-bedroom  property was recently placed on the market for $6.5 million.
photographs by the author
LaptrinhX.com has no authorization to reuse the content of this blog
Posted by Tom Miller at 1:00 AM