The Lost Church of the Strangers - Mercer St. near Waverly Place 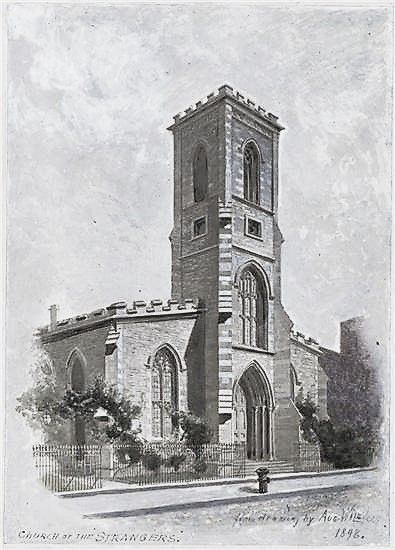 image by John m. August Will, 1898 from the collection of the Museum of the City of New York
On October 8, 1835 a group of affluent men petitioned the Third Presbytery of New York to organize a church to be called The Mercer-Street Presbyterian Church.  Things moved swiftly.  That same month the 45-year-old Rev. Thomas Harvey Skinner arrived in New York from Newburyport, Massachusetts, and on November 8 was installed as the pastor.
The small congregation was composed of prominent New Yorkers like James Boorman and his wife Mary, and Gordon and Marcia Burnham.  A church building was quickly raised on the west side of Mercer Street just north of Waverly Place.  The neighborhood, just two blocks east of Washington Square, was filling with opulent residences.
The Gothic Revival building featured a central tower and tall pointed arch windows.  The architect is unknown, however several of the elements, like the crenellation and layered buttresses, smack of Richard Upjohn's Church of the Holy Communion, completed a decade later. 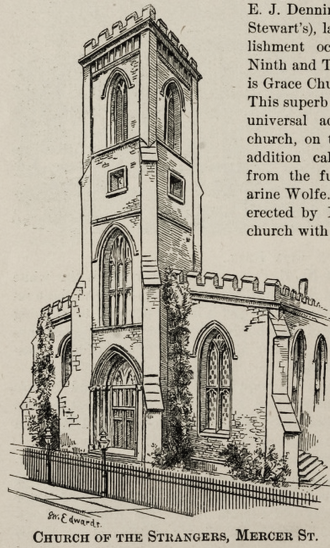 from Illustrated New York City and Surroundings, 1889 (copyright expired)
Rev. George L. Prentiss would recall in 1895, "No sooner was the new sanctuary completed than large numbers crowded into it from all parts of the city, and were at once received into its fellowship."  Other prominent families in the congregation were those of James Roosevelt, William E. Dodge, Anson Greene Phelps, and Alfred De Forest.
Among Rev. Skinner's first notable works was to help found the Union Theological Seminary in 1836.  For decades, the commencement exercises were held in the Mercer-Street Presbyterian Church.
Thomas Skinner resigned in 1848, triggering a series of rather short-lasting ministers.  The fourth, Rev. Robert R. Booth, was installed on March 6, 1861.  It was during his pastorate that significant change would come.  On September 16, 1870 the New York Presbytery merged the Mercer-Street Presbyterian Church with the First Presbyterian Church on University Place.  The combined congregations (now known as the Presbyterian Church on University Place) worshiped in the University Place church.  The Mercer Street structure was placed on the market for $65,000--about $1.4 million today.
Five years earlier Rev. Charles Force Deems had relocated to New York City from North Carolina.  Deems recalled in his 1897 Autobiography of Charles Force Deems, "Before the organization of any church and while I was simply preaching to strangers, a lady of high character living in Mobile, when on a visit to New York; always attended our service with her daughter.  With them I became acquainted."
The "lady of high character" was Mary Eliza Crawford and her daughter was Frank Armstrong Crawford.  Frank was highly taken with Deem's preaching and theology, and as her marriage to Cornelius Vanderbilt I approached, according to Deems, "it had been intended that I should celebrate the marriage, and that it would have been done but for my absence." 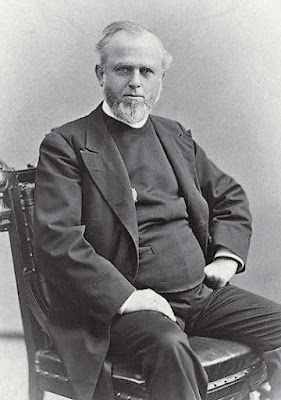 Rev. Dr. Charles Force Deems, from the collection of the New York Public Library
By the time the property became available, Deems's Church of the Strangers had been organized and was worshiping in a chapel at New York University.  The unusual name reflected Deems's non-denominational congregation, insisting that anyone who accepted the Apostles' Creed would be accepted.  He offered $50,000 for the property (money he did not have, but hoped to accumulate through fund-raising).
The Vanderbilts lived at 10 Washington Place, one block away from the Mercer-Street Presbyterian Church.  Cornelius Vanderbilt invited Deems to his mansion and offered to buy the church as a gift.  In Deems's words, "The commodore had never been a member of any church, had been a very worldly and even profane man; but he had from his earliest childhood the most unshaken faith in the Bible."  (The fact that his wife was an ardent admirer of Deems, no doubt, had much to do with the decision, as well.) 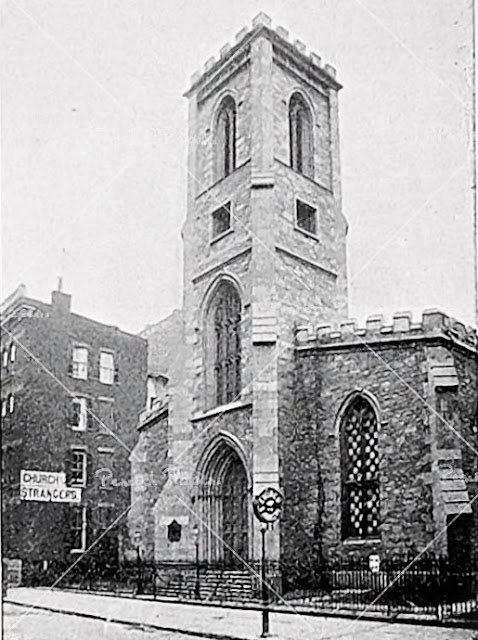 original source unknown
Vanderbilt's tepid feelings about organized religion became evident when Deems replied, "Commodore, if you give me that church for the Lord Jesus Christ, I'll most thankfully accept it."  Vanderbilt said, "No, doctor, I would not give it to you that way, because that would be professing to you a religious sentiment I do not feel.  I want to give you a church, that's all there is.  It is one friend doing something for another friend.  Now, if you take it that way I'll give it to you."
On October 3, 1870, The New York Times reported, "Since it has stood empty the edifice has been repainted, recarpeted, and renovated generally, and now presents quite a neat and tasteful appearance."  It had officially opened as the Church of the Strangers the day before.  Those attending represented some of the wealthiest and most influential in the city.  "Among the gentlemen present were Commodore Vanderbilt, Thurlow Weed, Horace Greeley, Peter Cooper, Daniel Drew, William M. Evarts, William F. Havemeyer, Algernon S. Sullivan, Stewart L. Woodford, William E. Dodge, Morris K. Jesup, James Lorimer Graham and E. I. Jeffray," said The New York Times. 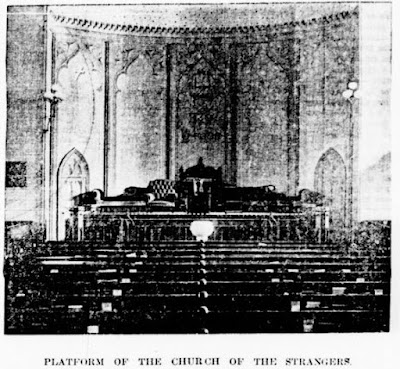 from New-York Tribune, January 23, 1898
Rev. Deems had instructed the ushers to escort all clergymen to seats provided at the front of the church.  "One enthusiastic usher in obedience to these instructions searched for a victim and was finally rewarded by seeing an elderly gentleman, wearing a white neck-tie, alight from a carriage.  He approached him, and taking his arm, led him up the the main side towards the pulpit."  Rev. Deems interceded, introducing the usher to Cornelius Vanderbilt.  When the embarrassed usher apologized, the millionaire exhibited an unexpected spark of humor.  As he took his seat, he said, "That's not the first time I have been taken for a clergyman.  No apology is necessary."
Despite Vanderbilt's disinterest in organized religion, his faith was strong and his friendship with Rev. Deems grew extremely close.  On Thanksgiving Day 1875 Vanderbilt took a ride in Central Park and caught a cold.  By the spring he could no longer go to his office, and on April 26, 1876 was confined to his bed.  Rev. Deems visited Vanderbilt nearly every day for eight months.  Using the third person, Deems wrote, "The commodore would not let him leave his side, often keeping him for hours...Through all those months the attachment between the two men increased."
Cornelius Vanderbilt died on January 4, 1877.  Two days later
The New York Times reported, "To-morrow morning the remains will be placed in the main hall of the house, where they will lie until 10 o'clock, at which hour they will be taken to the Church of the Strangers...where the funeral services will be performed."  The newspaper noted, "Some time before his death the Commodore requested Dr. Deems to avoid all pomp and abstain from all eulogy at his funeral."  Nevertheless, in his autobiography Deems wrote, "In his funeral sermon...Dr. Deems has set forth his estimate of the character of Commodore Vanderbilt."
Almost immediately a fund among the congregants was formed to memorialize Cornelius Vanderbilt.  In order that every member could contribute, the donations were limited to between 10 cents and $1.00.  Designed by William Gibson & Sons and approved by Frank Armstrong Vanderbilt and William Henry Vanderbilt, the bronze and black marble tablet was installed in the church in December 1879. 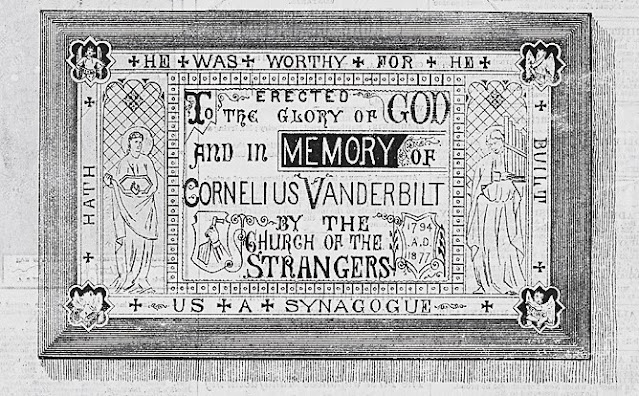 A depiction of the tablet appeared in several periodicals.  from the collection of the New York Public Library.
A surprising (at least to 21st century readers) ceremony took place in the church on Good Friday, 1881.  The New York Times reported, "Palestine Commandery, No. 18, Knights Templar, celebrated Good Friday by visiting the Church of the Strangers last evening and listening to a sermon by its Chaplain, the Rev. Dr. Charles F. Deems."  Accompanied by the fife and drum corps of the Ninth Regiment, the Knights Templar had marched "through Twenty-third-street, Fifth-avenue, Fourteenth-street, Broadway, Clinton-place, and Mercer-street, to the church."
A large floral arrangement with a Maltese cross presented by the commandery decorated the front of the church.  The Knights were seated in the front pews.  Congregants were given programs "printed in purple ink on lavender-colored paper [which] bore the insignia of the order on one leaf and a representation of the banner of the commandery on the other."  At the conclusion of the service, "The Knights arose in a body and, drawing their swords, saluted Dr. Deems and after passing out formed in line and returned to head-quarters."
There would be two other Vanderbilt funerals in the Church of the Strangers.  Cornelius Jeremiah Vanderbilt, described by The New York Times as "the discarded son of the late Commodore Vanderbilt," committed suicide on April 2, 1882.  Known within the family as C. J., he had never gained his father's approval, partly because of his epilepsy, which the commodore viewed as a weakness, but also because of his long-term relationship with his "particular friend," as worded by The New York Times, George Terry.  C. J. had been given a humiliatingly small portion of his father's estate.  On April 5, 1882, The New York Times reported on his funeral in the Church of the Strangers, saying, "The church was nearly filled, but aside from the members of the Vanderbilt family few persons of note were present."
Such was not the case on May 7, 1885.  The New York Times reported, "Many distinguished and well-known New-Yorkers attended the funeral of Mrs. Frank A. Vanderbilt in the Church of the Strangers."  The newspaper commented, "She married Commodore Vanderbilt when he was an unbeliever, and she made him a Christian."
Rev. Charles Alexander Force Deems died on November 18, 1893.  The Church of the Strangers was "crowded to the doors" during his funeral on November 22 at noon.  Among the pallbearers was Cornelius Vanderbilt III, the grandson of Commodore Vanderbilt. 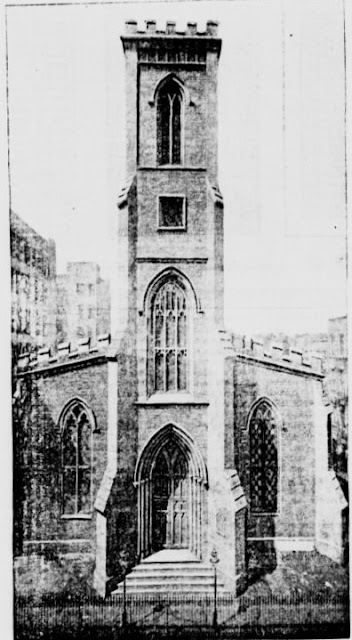 from New-York Tribune, January 23, 1898
Just over four years later, on January 22, 1898, the last service was held in the church.  The Sun reported, "Nearly 1,200 persons crowded into the Church of the Strangers on Mercer street...to take part in the final service in the old edifice.  Next Sunday the congregation will move into its new home, on Fifty-seventh street, near Eighth avenue."
The New-York Tribune commented on the much-changed neighborhood.  "The quaint old building of rough stone is not small, even for a church of to-day, and when it was new, back in the thirties, it was doubtless regarded as an exceptionally large and imposing structure.  In those days it was at least allowed to show for what it was worth."  But, said the article, as "the neighborhood in which it is situated gradually changed from a quiet residence district to a noisy, active business centre, there came a corresponding change in the surrounding architecture."  The vintage church was now engulfed by loft buildings.
The structure sat empty until 1901 when a demolition permit was issued.  The loft building which replaced it was completed in 1903 and survives.
no permission to reuse the content of this blog has been granted to LaptrinhX.com
Posted by Tom Miller at 1:00 AM