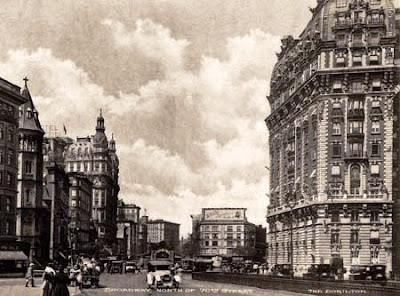 The Boulevard, as Broadway was called in the early days of the 20th Century, promised great things to come. William Stoke’s elaborate Beaux Arts Ansonia apartment building was under construction at 73rd Street on the wide, spacious boulevard that evoked, at least in Stokes’ mind, the Champs Elysees of Paris.

Developer Hamilton M. Weed jumped on the French-inspired bandwagon, commissioning architects Elisha Harris Janes and Richard Leopold Leo to design a Beaux Arts concoction two blocks to the south at 71st Street. When completed in 1902, the Dorilton was an explosion of ornamentation.

It immediately drew the wrath of architectural critics for its overblown decoration. 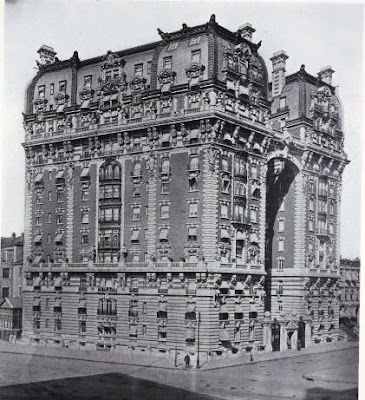 Foremost among the building’s critics was Montgomery Schuyler of the Architectural Record. Never one to mince his words, Schuyler wrote “It not merely solicits but demands attention. It yells ‘Come and look at me' so loud that the preoccupied or even the color blind cannot choose but hear.” 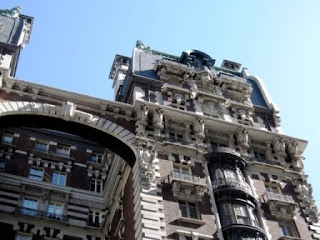 He added “Everything shrieks to drown out everything else,” and “Motley elements set the sensitive spectator’s teeth on edge.”

Well-to-do apartment hunters were not swayed. Weed’s lavish building, which cost him $750,000, was quickly filled with socially-recognized names.

Millionaire Emil Wolff lived here until his death in 1918, leaving over $2 million to Jewish religious and educational charities.

The Dolimar had separate elevators for tenants and servants, French paneled rooms, filtered water and a facility to recharge tenants’ electric motorcars. But most of all, it had exterior flamboyance. 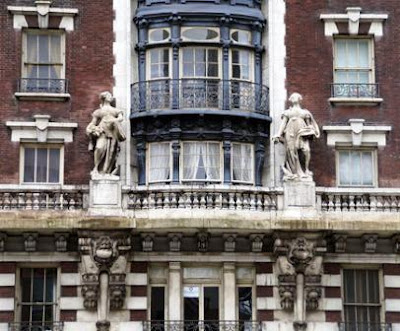 Huge statues of The Seasons stand above the fourth floor balustrade, sculptures of groaning, muscular titans support limestone and cast iron balconies, dripping brackets and vaguely Art Nouveau-inspired elements ooze from the façade. According to critic Carter B. Horsley “Although the Dorilton has not always been one of the city’s most prestigious residential addresses, it is one of the most spectacular architecturally.”

Most distinctive is the 71st Street entrance, a wide courtyard spanned by a connecting arch at the ninth floor. What Horsley calls “the most attractive entrance gate in the city” features sculpted cherubs, grand iron gates and colossal limestone columns surmounted by enormous globes. Schuyler disapproved of these, as well, saying they were “left there for titans to roll at ten pins.” 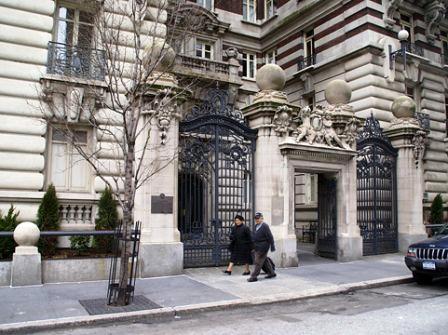 In time the matronly building suffered neglect. In the 1950s exterior elements were falling off. Entire dormers, wide sections of cornices, and other decorative components were either crumbling or gone entirely. By 1979 Paul Goldberger lamented “the sorry state of decay it has descended to.”

In 1984 the Dorilton was converted to a co-op. A year later residents began restoration efforts. More than a decade later the renovations continued: the mansard roof was reslated, missing dormers and cresting were reproduced and a $1.5 million restoration of the roof was undertaken, headed by engineer, Robert Feuer. Interestingly, the missing 11th floor cornice was reproduced in trompe l’oeil – the empty wall painted by John Williams and John Wright Stephens to imitate the original. 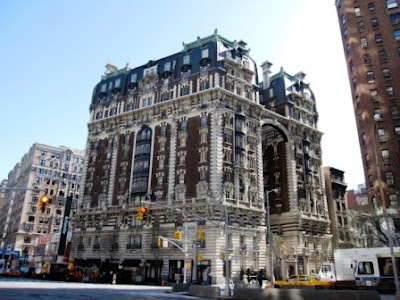 As the flamboyant elegance of the building has re-emerged, modern critical appraisal is less harsh. In The AIA Guide To New York City Architecture, Elliot Willensky and Norval White call it a “cornice-copia.” And the 1983 book New York, 1900, Metropolitan Architectgure and Urbanism 1890-1915 by Stern, Gilmartin and Massengale says “It was precisely the intricacy and the burly swagger of the Dorilton which was the source of its drama and expressed the optimism of the new century.”

In the sleek glass and steel environment of New York today, a little over-the-top, sugary ornamentation is a welcomed break.

historic photographs from the NYPL Collection
Posted by Tom Miller at 3:09 AM