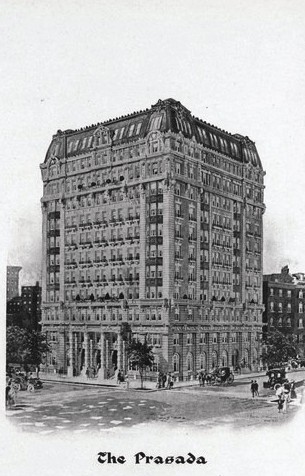 In the first years of the 20th Century, millionaires’ mansions were springing up ever northward along the east side of Central Park on Fifth Avenue.  On the west side along Central Park West, however, luxurious apartment buildings were the trend.


Here, at the corner of 65th Street in 1904, The Prasada began rising.  Developer Samuel B. Haines commissioned Charles Romeyn to design a 12-story, opulent apartment house that would lure high-class tenants.  The building Romeyn produced was frosted with Beaux Arts ornamentation and capped with a two-story mansard roof.  Residents and guests entered through an impressive portico supported by four two-story banded pillars.


Completed in 1907 and costing about $250,000, there were only three apartments per floor “assuring to the tenants the luxury of large rooms.”  The World’s New York Apartment Album said “All the principal rooms throughout the building command an extended view of Central Park with its attendant advantages.  Servants’ rooms, bathrooms, kitchens, etc., are located facing the court.”

The wealthy residents were provided with the expected amenities: parlors, libraries and dining rooms all boasted ornately-carved Caen stone French mantels; the oak-paneled dining rooms had stately beamed ceilings; a cold-storage plant provided ice to the glass-and-tile lined refrigerators; and in a surprisingly modern touch there were telephone connections in every apartment and “electrical-base receptacles for reading lamps in dining room, library, parlor and in some of the sleeping rooms.”

The impressive lobby entrance hall was floored in marble, its walls were French Caen stone and the ceilings ornately plastered.  It lead to a large “Palm Room” with fountain, covered by a stained glass dome supported by four caryatides.

In 1909 Haines sold The Prasada to “the Prasada Company,” a group of investors who resold it in 1912 for $1,250,000 to the Read Realty Company.  Six years later it was sold again, for $1,350,000, to Penrhyn Stanlaws and Walter Russell.  According to The New York Times, the new buyers intended to reconstruct the building “into a new type of apartment house which is practically a combination of club, hotel, and apartment evolved to meet modern conditions, such as the servant problem and high cost of rents.”

Stanlaws and Russell set aside approximately $1.35 million for their renovations, calling upon architects Starrett and Van Vlect and contractors Fred T. Ley & Company to accomplish the remake. 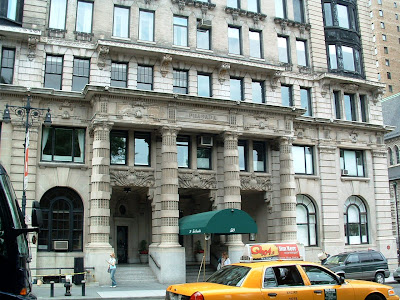 The first floor would consist of “reception rooms, writing rooms, tea rooms, dining rooms, grill rooms and retiring rooms” while in the basement “will be located a natatorium of marble and tile with a swimming pool, shower baths, etc., as well as a gymnasium.” So that tenants did not have to dress simply to move from their apartments to the swimming area, special elevators would be installed for that purpose.

The “reconstruction” was completed in 1919 and, while not all of the new owners’ visions were carried out, The New York Times raved “…it is going to meet the difficulties of the servant problem, which has become increasingly difficult during the last decade.”

Every apartment was connected to a large, staffed kitchen by electric dumbwaiters.  “In this main kitchen they are to employ chefs to cook for the tenants just as they will employ elevator boys to carry tenants to their floors,” said The Times  A housekeeping service was available by the hour. “In this way the housekeeper may be independent of servants entirely if she chooses or she may keep house by doing that part of the work which is pleasant for her and obtaining specialized maids to do that which is drudgery to her.”

The services of the chef and his kitchen staff were free to the residents; butler, maid and laundress services were charged by the hour. It was a perfect solution, according to The Times article.  “To those who wish to keep but one servant there are added difficulties, for general houseworkers are hard to get, but under this plan one specialized maid may be kept and others obtained by the hour for any purpose whatsoever.”

Unfortunately the 1919 renovation also included the removal of the attractive mansard roof, replacing it with a two-story flat brick façade.

One of the first new tenants was author Edna Ferber who wrote “So Big” and “Showboat” while living here. She wrote of The Prasada, “I’m never going to give up this wonderful place. Never. They’ll have to wheel old ‘Gamma Ferber’ out when they tear the building down.”

Throughout the 20th Century The Prasada continued to attract the celebrated and the wealthy. Oil millionaire T. J. Ryder rode out the Depression here and in 1937 the conductor of the Metropolitan Opera, Ettore Panizza, leased a furnished triplex penthouse of ten rooms and four baths.

Unhappily, sometime before World War II the stone balustrades on the fourth and tenth floors were removed and the iron railings outside each apartment window were discarded.  The Palm Room fountain was eliminated along with most of the lobby detailing; however much of the interior stained glass remains. 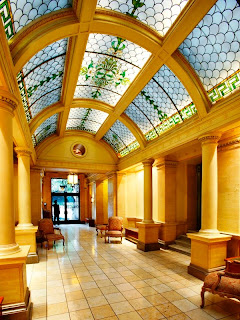 It was converted to a cooperative building in 1988 and in 1999 the cooperative hired architects Ehrenkrantz Eckstut and Kuhn to redesign the lobby and JMA Consultants, an engineering firm, to reconstruct the parapet.
While tenants can no longer have gourmet meals torpedoed up an electric dumbwaiter from the kitchen below or order butler service by the hour, The Prasada remains an esteemed address along Central Park West.


Photo Sothebys International Realty
Posted by Tom Miller at 2:39 AM