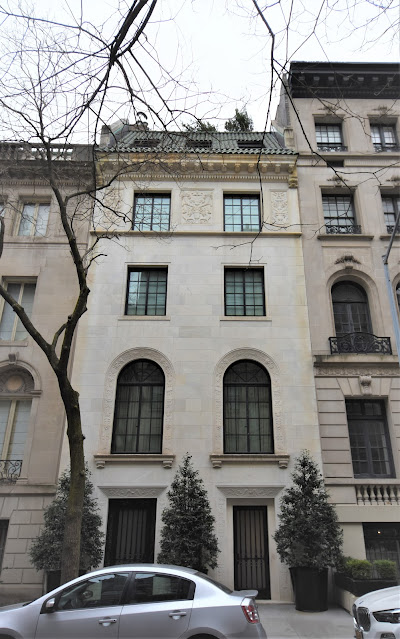 On November 17, 1879 brothers David and John Jardine advertised one of their pair of newly build residences:

For Sale--The elegant four-story full-wide bay-front brown-stone house, No. 20 East 64th-st.; just completed, designed and built by the undersigned in the most careful and complete manner.  Can be seen any day.  D. & J. Jardine, Architects

The 25-foot-wide, high-stooped house was sold to Henry Belden, Jr. and his wife, Clara.  Oddly, the Beldens had a proclivity for moving.   In the two years since 1877 they had lived in Brooklyn, on East 47th Street, on  West 45th Street, and at 18 West 38th Street--sometimes staying only for a matter of months.  Their habits did not change with the purchase of 20 East 64th Street.
In 1880 the Beldens moved to Irvington, New York and sold the 64th Street house to Franciso Bianchi and his wife Elizabeth for $80,000--around $2 million today.  Bianchi was a millinery merchant as well as an officer in the Eighth Avenue Railroad.
Tragically, the family were in their new home only a few months before the drawing room was the scene of a funeral.  The Bianchi's son, Theodore, was about 11 years old when he died on September 5, 1880.
There would be another funeral in the house three years later.  Living with the family was Joanna Willis, the elderly widow of William Willis and presumably Elizabeth's mother.  She died on July 19, 1883 at the age of 81.  Her funeral was held in the drawing room the following day.
The Bianchis sold the house in October 1898 "for about $80,000," according to The Sun (interestingly, that was exactly what Francisco had paid for it 18 years earlier).  The buyers were Henry P. Goldschmidt and his wife, the former Georgette Woodleaf.
Born at Frankfort-on-the-Main in 1843, Goldschmidt was a banker.  He had come to New York in 1866 to work with the German banking house of Ballin & Sander.  He was now the head of the banking firm of H. P. Goldschmidt & Co.
He and Georgette maintained a "handsome villa in South Elberon, New Jersey," as described by George von Skal in his 1910 History of German Immigration in the United States.
On February 18, 1920 Goldschmidt sold the outdated brownstone to Frederick M. White.  Before he and his wife, the former Pansy B . Belwin, moved in, they hired architect Harry Allan Jacobs to transform it to a modern mansion in keeping with the neighborhood.  (The New York Evening Post commented that Jacobs "has planned some of the finest residences in New York.)
Jacobs stripped off the brownstone façade and removed the stoop.  A new marble front was erected at the property line.  Completed in 1921, the chaste neo-French Renaissance residence featured little ornamentation.  The main and service entrances at street level were nearly undistinguishable, their concave frames delicately carved with Renaissance style decorations.
Similar carvings embellished the arched openings of the second story.  The fourth floor sat above a projecting band.  Here intricately carved panels flanked the openings.  The windows of the tiled mansard, interestingly, were recessed within the roof, rather than taking the form of more expected dormers. 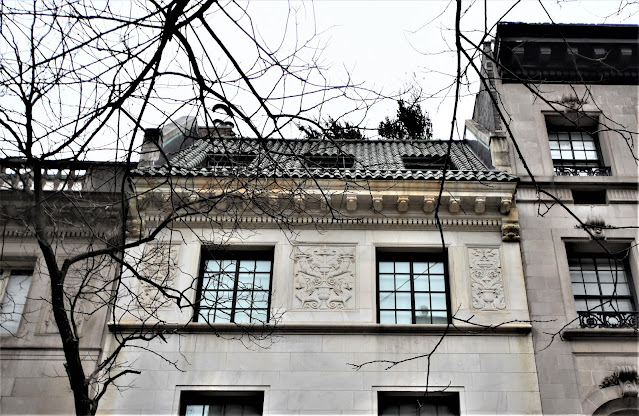 White was president of Peters, White & Company, president of the Mapes Company, and vice-president of the Mutual Chemical Company of America.  He and Pansy had been married since 1909.  His many social clubs included the New York Athletic, the Bankers Club, the Oakland Golf Club and the New York Club.
Perhaps unexpectedly, after spending $40,000 in renovating their house--in the neighborhood of $738,000 today--the Whites sold it in May 1927 to J. Clark Dulany and his wife, Belle Bart.
The Dulanys were a colorful couple.  They established the American Academy of Astrology in the house upon moving in.  They and their operation quickly raised eyebrows--both social and legal.
On May 9, 1928 the Daily News reported, "At Belle Bart's fashionable astrology parlor at 20 East 64th st., you may learn what the stars have to do with your most private affairs.  But Edmund E. Frisch, jeweler of 576 5th ave., who is trying to find out what has become of a diamond brooch he values at $12,500, is not so sure the revelations are authentic."
Frisch had met the Dulanys in August 1927 in Lucerne, Switzerland.  They asked him to drop by the 64th Street mansion in December with a selection of jewelry from which to choose.  The  couple picked out the brooch as well as a diamond-studded bracelet with a $350,000 price tag in today's money.  They asked Frisch to leave the pieces so they could have them independently appraised.
Five months later Frisch had received neither payment nor the jewelry.  In May 1928 the bracelet was discovered in a pawn shop.  It was being held by the sheriff when, within days, the Dulanys appeared before State Supreme Court Justice Thomas C. T. Crain "to explain...why they shouldn't produce the brooch and also have the sheriff return the bracelet to Frisch."
On May 25 The New York Times reported that on the stand Belle said she was wearing the brooch one day in April, "and later in the day discovered it was missing."  The article added, "A search of the house failed to reveal it, she said."
This was (so far) the third time the Dulanys had been in legal trouble that year.   In February they had defended themselves against a law suit filed by George A. Devoe for default in a $20,000 loan made to the Academy.  And in reporting on the Frisch case, The New York Times noted, "Mrs. Dulany was mentioned last week in the replevin suit by the Federal Insurance Company to recover an $18,000 diamond ring alleged to have been lost by Mrs. Frederick W. Trabold, in which it was said the ring came into Mrs. Dulany's possession."  The ring had been pawned for $8,000.
Then, on August 24 that same year The Yonkers Statesman reported that George A. Devoe had been arrested for embezzling $325,000 from the New Jersey Fidelity and Plate Glass Insurance Company.  The complaint alleged that he shared the proceeds "with Mrs. Barton Delaney [sic], known also as 'Belle Bart,' an astrologist and her husband J. Clark Delaney [sic], 20 East 64th Street."
The Delany's left 20 East 64th Street in 1931 (they filed for personal bankruptcy in 1932).  The new owner, Roy Wilson Howard, had architect F. Albert Hunt make interior alterations to the 22-room mansion.
Howard was chairman of the board of the Scripps Howard newspapers.   Living with Howard and his wife, the former Margaret Rohe, were their son, Jack, and Margaret's unmarried sister, Alice. 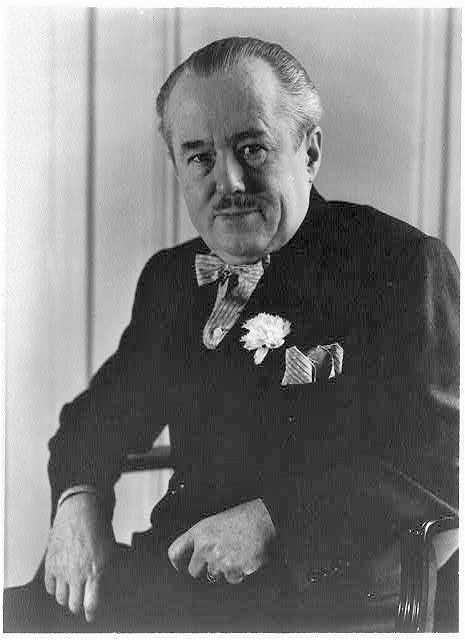 Roy Wilson Howard from the collection of the Library of Congress
Howard was a self-made man, having been born in Gano, Ohio on New Year's Day 1883 to a railroad brakeman and his wife.  Following his father's death, he was forced to drop out of school and help with the family's finances.  He found a job with the Indianapolis News and went on to a career in journalism.
Alice Rohe was as fascinating as her brother-in-law.  In 1914 she had served as bureau chief in Rome for the United Press.  She was the first female to hold such a position with an international press organization.  She was, as well, the first women to interview Italian Fascist leader Benito Mussolini.  When World War I broke out, she served with the Red Cross in the Balkans. 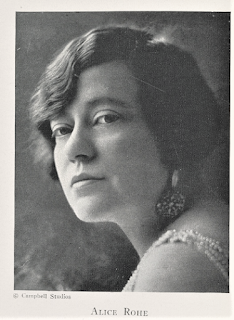 Alice Rohe from the collection of the Library of Congress
Alice died on April 7, 1957 at the age of 81.  She bequeathed an impressive collection of Etruscan antiquities to the University of Kansas.
Roy Wilson Howard died on November 20, 1964.  After various owners it was purchased by Irish-born real estate investor Derek M. Quinlan in 2005 for $26.25 million.   He listed it in 2009 for $37 million after the real estate market had plummeted the previous year.  He finally sold it in August 2011  to Gregg Hymowitz for $3.25 million less than he had paid for it. 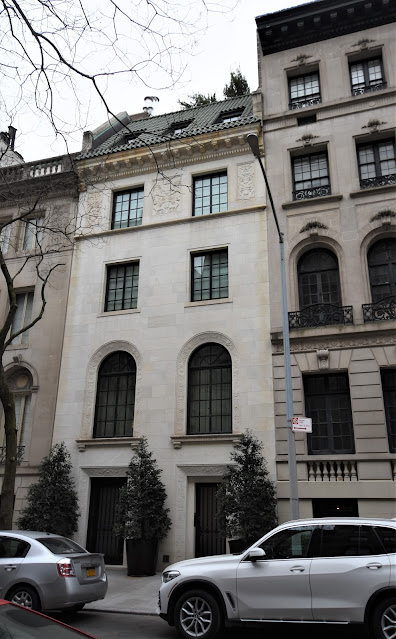 Hymowitz, a co-founder of EnTrust Capital Funds, immediately began renovations--some of which did not please the locals.  By June 2015 he faced two lawsuits from neighbors who claimed their residences were being damaged by his construction.  The owners of 22 East 64th Street alleged their foundations had been damaged by Hymowitz's "attempt to build a below-ground bowling alley," according to Curbed New York.  They sued for $5 million.
Despite any interior remodeling, the exterior remains precisely as it looked when Harry Allen Jacobs gave it a sensational make-over in 1921.
photographs by the author
no permission to reuse the content of this blog has been granted to LaptrinhX.com
Posted by Tom Miller at 1:13 AM