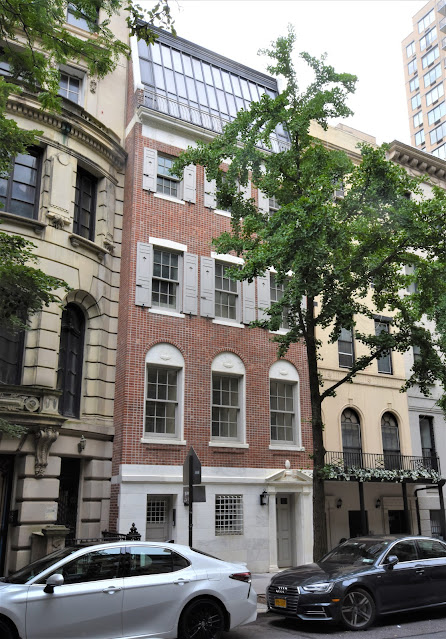 Edward Kilpatrick designed and constructed a row of high-stoop brownstone houses along East 82nd Street, between Fifth and Madison Avenues, in 1888-89.   He advertised the 21-foot-wide dwellings as "elegant."  On June 22, 1889 the Real Estate Record & Guide reported that he sold one of them, No. 12, "to Mary K., wife of David Palmer."  (Putting real property in the wife's name was common at the time, assuring security in case of the husband's demise.)

Born in Westchester County in 1814, Palmer had been president of the Dry Dock Bank, was for many years vice-president of the Cumberland Coal and Iron Company, and had co-founded the Philadelphia and Reading Coal and Iron Company.  He was now vice-president of the National City Bank.
David and Mary had two daughters, Caroline H. and Louise S., and a son, Stephen Squire.  Stephen was 36 years old when his parents purchased the house.  He was married to the former Susan Flanders Price.  The couple, along with their son, Edgar, moved in with David and Mary.
David Palmer's health began to fail in 1894.  He died in his bedroom on August 5 that year, and his funeral was held in the drawing room on the 7th.   There would be another funeral in the house only two months later.  Susan died on October 30 at the age of 40.
Stephen was more well known than his father had been.  He was a director in the National City Bank and an officer and director in more than 30 other corporations.  A graduate of Princeton University, he was appointed president of the New Jersey Zinc Company in 1897. 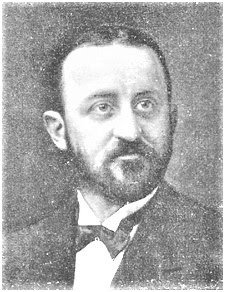 Stephen S. Palmer - original source unknown
Palmer was intensely concerned about the welfare of his workers.  He created the mutual Relief Association which gave financial relief to employees and their families for medical reasons or in case of accidental death.  He build schools and encouraged the continued education of his workers.  In 1906 he built the St. John's Episcopal Church in Palmerton, Pennsylvania (named in his honor) in memory of his Susan.
Mary Katharine Squires Palmer died at the age of 68 on May 12, 1901.  Stephen and his son lived on at 12 East 82nd Street and in Redlands, California until Stephen's death on January 29, 1913.  His funeral was held in All Angels' Church on West End Avenue.
Edgar, who was now 32 years old, inherited the 82nd Street house.  By 1919 he was leasing it to George Lewis Chapman.  He and his wife, the former Augusta Bradley, had one daughter, also named Augusta.  The family maintained a summer home, Cedarbrook, in Nyack, New York.  Augusta married Francis William Randebrock in the Church of the Heavenly Rest in 1919.
Edgar Palmer sold his grandparents' home on April 16, 1920.  William Joseph Ryan was the wealthy owner and publisher of the Literary Digest.  He and his wife, Helen B. Cuddihy, had three children, Bennett Yarrow, Jane Yarrow and Ruth Yarrow Ryan.  Their country home, Yarrow, was at St. James, Long Island. 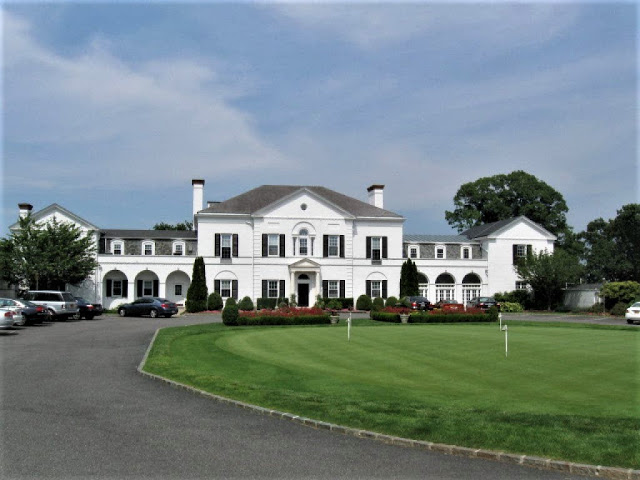 The Ryan's country estate, Yarrow, as it appears today.  photo via patch.com
The Ryans commissioned architect Bradley Delehanty to completely remodel the outdated brownstone.  The front was pulled forward to the property line.   The new neo-Federal façade was distinguished by a marble base, three floors of red Flemish bond brick, and a steep copper-clad mansard with three dormers. 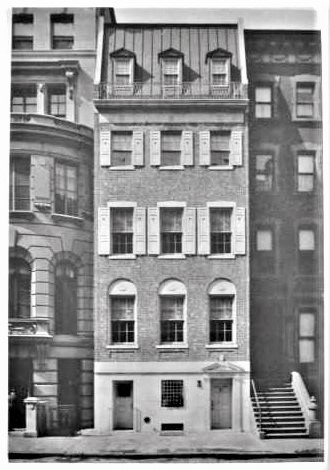 American Architect & Building News, August 20, 1926 (copyright expired)
The Ryans were highly visible among society.  On September 29, 1933, for instance, the Smithtown newspaper, the Messenger, reported on the reception and tea dance held at Yarrow for Jane's debut.  "There were more than 300 guests, most of them older friends of the debutante's family."
Many of Helen's entertainments revolved around philanthropic causes.  On January 29, 1935, she hosted a "bundle tea," to which all the invited socialites were asked to bring wearing apparel for the Lots for Little Thrift Shop on Third Avenue.  And on April 1 that year she hosted a bridge and tea "to aid the work of the Catholic Big Sisters," as reported by The New York Sun. 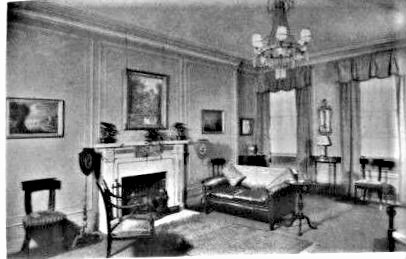 American Architect & Building News, August 20, 1926 (copyright expired)
But the Ryans' focus would turn from teas and luncheons to something far graver later than year.  Bennett was a sophomore at Harvard University.  Following the Harvard-Dartmouth football game on Saturday October 26, a raucous party broke out in Bennett's residential hall, Dunster House.   The janitor, 67-year-old Frank Foster attempted to quiet the noise.  He was described by The New York Times as "a small man of frail physique."
Bennett Ryan flew into a rage and beat Foster mercilessly.  He was witnessed in the act by a campus watchman, William A. Lawrence, who rushed to the 100-pound janitor's aid.  The New York Sun reported, "Foster was dangerously injured" and "suffered a fracture of the skull and other injuries."
Over the next few days, investigators questioned five students, but could not find Ryan.  A warrant for his arrest was issued on November 1.  The Sun reported, "Ryan has been absent from his room since Monday...and has not attended classes.  He was reported in seclusion with his father at a Boston hotel."
Bennett turned himself in, offering a dubious excuse.  On November 24, 1935 The New York Times reported, "Ryan testified that he was intoxicated at the time and had no recollection of what happened."  Bennett was found guilty of assault and battery, but received what many must have felt was a mere slap on the hand.  The Ryans paid Foster $7,000 (around $140,000 in today's money) "as amends for the injuries suffered in the assault."  It may have been the incentive for the janitor's plea for leniency.  According to the Meriden, Connecticut newspaper The Journal, he told the judge he did not wish to see Ryan go to jail.  Bennett was fined $100, given a suspended sentence, and expelled from Harvard. 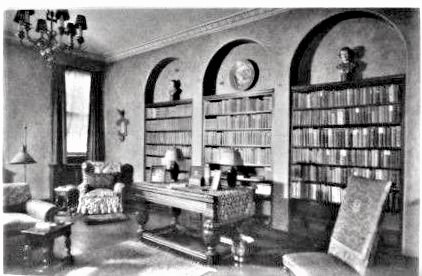 The Ryans' library.  American Architect & Building News, August 20, 1926 (copyright expired)
Three years later, on January 15, 1938, The New York Sun reported that Bennett was engaged to Valerie Lathrop.  While the article went on at length about her bride-to-be's lineage, it mentioned only, "Mr. Ryan is a grandson of Mr. and Mrs. Robert J. Cuddihy of 300 Park Avenue."
Ruth Yarrow Ryan was married to Henry Sanford, Jr. in the 82nd Street house the following year on September 1.  The New York Sun reported, "The bride attended the Sacred Heart Convent and the Ethel Walker and Oldfields Schools." 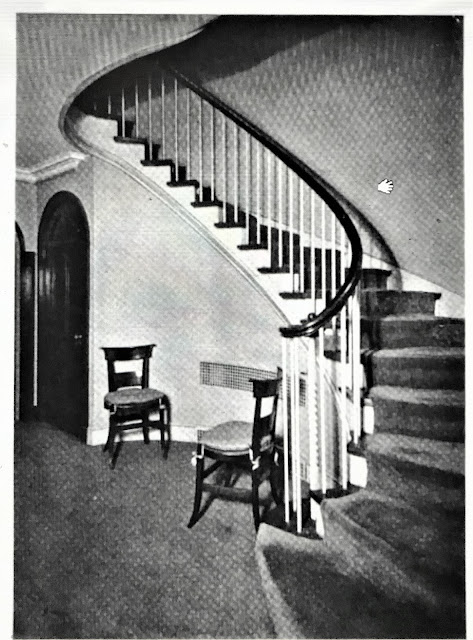 American Architect & Building News, August 20, 1926 (copyright expired)
On January 12, 1940 The New York Times reported that William J. Ryan had sold "the five-story dwelling containing fourteen rooms and an elevator."  In 1945 it was converted to a two-family home, and it was probably at this time that the copper of the mansard was replaced with glass panels.
Among the residents over the next decades were Herbert N. and Hortense Busse Goodman.  Herbert was the chairman of Danskin, Inc., makers of women's and children's apparel.  The couple had a second home in Palm Beach, Florida.  Herbert died there in November 1975 and Hortense died at the age of 81 on April 25, 1977.
At the turn of the 21st century the property was owned by Jocelyne Wildenstein, former wife of billionaire art dealer Alec Wildenstein.  Accused of extensive plastic surgery because of her cat-like appearance, she denied it, telling an interviewer in 2018 that her features were simply a result of her Swiss heritage.
Wildenstein sold the mansion for $14 million in 2006 to Russian-born Janna Bullock.  Penelope Green of The New York Times wrote in July 2007 that the nanny-turned developer "has taken as her hobby, as she put it, the buying, renovating and flipping of choice single-family Upper East Side town houses."  Her designs were not always welcomed by neighbors and preservationists.
Bullock gutted the former Ryan mansion.  In April 2012 The New York Times wrote, "The back of No. 12 is five stories of jagged bricks, exposed beams and a sad blue tarp, shredded as if by desperate animals, hanging in halfheartedly across a few years of the open building."  Rain poured in during the summer and snow piled up in the window.  Bullock placed it on the market in 2012 for $19 million with the caveat "To be built out and is being sold in 'as is' condition."   The "hollow shell," as described by the Observer on January 1, 2013 was sold and is currently undergoing renovations.
photograph by the author
LaptrinhX.com has no authorization to reuse the content of this blog
Posted by Tom Miller at 1:15 AM