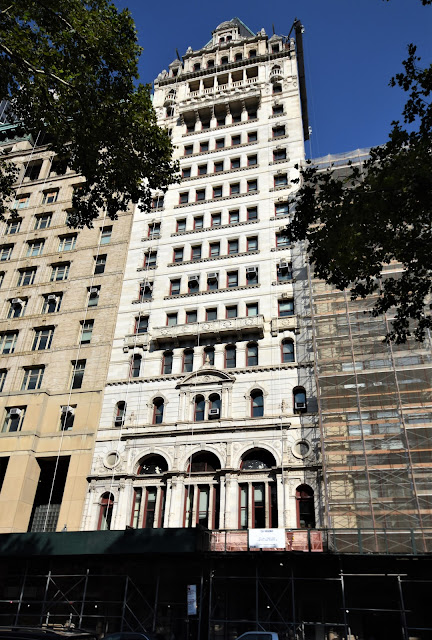 Founded in Brooklyn in 1860, the Home Life Insurance Company had moved several times by 1892 when construction was begun on a new headquarters at 256 Broadway.   Not long after construction began on November 2, serious problems arose.  Next door at 257 Broadway was the Merchants' Exchange National Bank building.  The excavations so compromised that building's foundations that it building listed a noticeable 18 inches.  Negotiations were completed in February 1893 for the Home Life Insurance Company to demolish the bank building, and enlarge its own structure to encompass the entire 55-foot-wide plot.  In the deal, the Merchants' Exchange National Bank was provided a high-end banking facility on the ground floor and basement levels, and "favorable" rent rates.

A competition among architects had been held, which was won by Napoleon LeBrun & Sons, with Pierre Lassus LeBrun in charge.  Completed in August 1894, the structure rose 16 stories and faced City Hall Park.  Behind the stately, marble façade was a framework of steel girders.  Lebrun embellished the richly ornamented building with Renaissance motifs--balconies, arcades, and elaborate carvings. 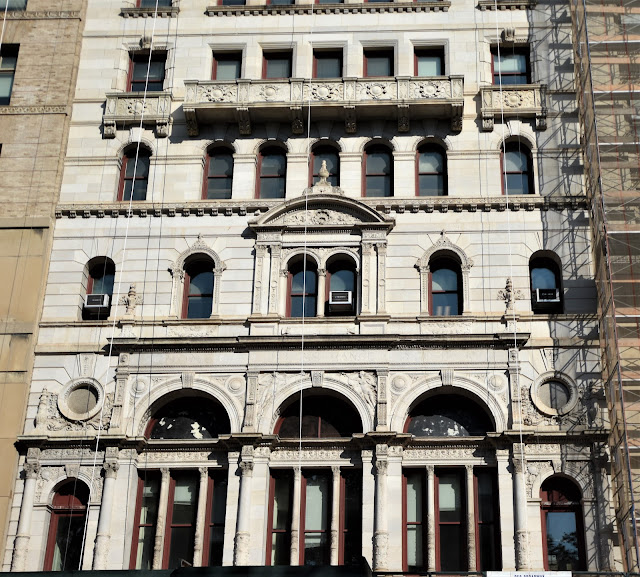 The often acerbic architectural critic Montgomery Schuyler lavished praise on the design, calling it "an impressive example of sumptuousness."  LeBrun had designed it in a "dumbell" configuration--with light courts on either side behind the wider front and rear portions of the building.  Care was taken to use only "fireproof" structural materials.

King's Views of New-York City, 1894 (copyright expired)
Among the early tenants were several lawyers and real estate agents.  The Rapid Transit Railway's offices were in the building upon its opening, as well.
Tragedy occurred four years later.  On the night of December 4, 1898 there was an explosion in the basement of the Rogers, Peet & Co. building next door at 268 Broadway.  The Illustrated American wrote, "In an incredibly short space of time the whole building was a seething mass of flames seeking fresh food.  They found it in the adjacent structure of sixteen stories, known as the Home Life Insurance Building."
The windows looking onto the side courts were not outfitted with iron shutters, "which should have been there according to law," according to The Illustrated American.  Driven by what the Real Estate Record & Guide called "fierce gale of wind," the blaze entered on the eighth floor and soon engulfed the entire upper section of the Home Life Insurance Company Building.  The Record & Guide said, "In addition to the furniture and other contents, the fire destroyed the window frames and sashes, the doors, trim, floor boards and the wooden floor sleepers."
This was the first time fire had broken out in a skyscraper and it proved to be a major problem.  "The Fire Department could obtain no water above the eighth floor...Higher, the firemen were helpless, and the fire had to burn itself out without let or hindrance," said the journal.  The eighth through the sixteenth floors were gutted, although the steel framework and the hard-burnt clay arches and columns left the building "structurally uninjured," according to the Record & Guide.
Pierre LeBrun filed plans for the reconstruction of the exterior and interior on December 19.  The Sun reported, "It is proposed to rebuild the ornamental white marble front from the eighth floor to the roof, and to replace all the damaged terra-cotta and steel work with new material."  The costs were estimated at between $60,000 and $70,000--about $2.3 million on the higher end today.

from King's Views of New York City, 1903, (copyright expired)
The Home Life Insurance Company's president announced, "We will run the place practically as a seven-story office building, and everything will be done to make the tenants on the lower floors comfortable while the construction above goes on.  Every part of the front that shows any sign of damage will be renewed, and the building will, after the repairs, look just as it did before the fire."
The inferno proved that the Home Life Insurance Company's building was both a success and a failure.  Its structural integrity held up as intended; however changes in the building laws were to follow because of its shortcomings.  Buildings Inspector S. M. Rutherford noted that the installation of iron shutters would be mandatory going forward and he anticipated the prohibition of wooden flooring.  "If there had been no wooden floors in the Home Life it would have escaped," he said.
Tenants in the refurbished structure included trial lawyer Ernest Snook; the real estate offices of Henry J. Hume, of McDonald & Wiggins, and of Wood, Harmon; the Anglo-American Savings & Loan Association; and the legal firm of Bookstaver & Norton.
Henry Weller Bookstaver, a member in Bookstaver & Norton, had been a State Supreme Court judge.  He and two others, attorney Louis B. Hasbrouck and physician Egbert Le Fevre, were approached by mining expert Charles M. Dobson in 1901 to invest in "the famous 'South Sea bubble," as reported by The New York Times on February 1, 1902.  They were induced to invest in Cuban mines with the promise that they would reap substantial profits within two months.
Dobson was to leave for the mines in December 1901.  When the three investors had heard nothing from him a month later, Hasbrouck traveled to Harlem where Dobson lived to check.  His wife confirmed that he was in Cuba.  Nevertheless, Hasbrouck was not so sure, and the following day sent an undercover messenger to the house.  Two of the Dobson children were in the yard playing and when asked where their father was, they told the man he was in bed.  On January 31 the investors had Hasbrouck arrested for fraud.  Nevertheless, they saved face, telling reporters that "they still maintain that 'there are millions in' the mining enterprise into which they were induced to launch."
On an upper floor of 256-257 Broadway was a restaurant which catered to the building's workers.  On November 3, 1909 Margaret Larty, a stenographer, and Irene Hamilton were there for lunch.  The women placed their handbags on the coat rack--something inconceivable today.  Irene happened to look up to see a "well dressed young man" take Margaret's handbag and start out of the restaurant.  The Sun reported, "When she screamed and started for him, he threw the bag at her and ran down several flights of stairs."
The women were not about to let the would-be crook escape.  They followed and saw him exit the staircase and take an elevator down.  "They took another elevator and reached the bottom in time to raise a cry as he ran from the building," said The Sun.  Margaret and Irene yelled "Stop thief!" and caught the attention of traffic officer Andy Nylander.  The Sun reported, "The shrieks conjured upon the spot a posse comitatus of a hundred persons or more with the policeman at its head."
The "vigilance committee," as described by the newspaper, chased 27-year-old Martin W. Payne for blocks until a West Broadway streetcar blocked his escape.  Officer Nylander nabbed him, telling the crowd, "All right, I got him."  The article noted, "He perspired freely and was roundly applauded."  The two women were late back to work that afternoon.  They appeared in Magistrate Kernochan's courtroom to testify about what had transpired.
The bank space on the ground floor was home to the Atlantic National Bank in the post-World War I years.  In July 1922 it merged with the Bank of America.  The New York Times reported, "The business of the Atlantic National Bank will be continued at 257 Broadway, opposite City Hall, as the Atlantic branch of the Bank of America.  The space was taken over by the First National City Bank in 1936.
In 1947 the Home Life Insurance Company purchased the Postal Telegraph Building next door.  Designed by George Edward Harding & Gooch, it had been built simultaneously with the Home Life Insurance Building.  The two architecturally different structures were joined internally, now jointly called the Home Life Insurance Building. 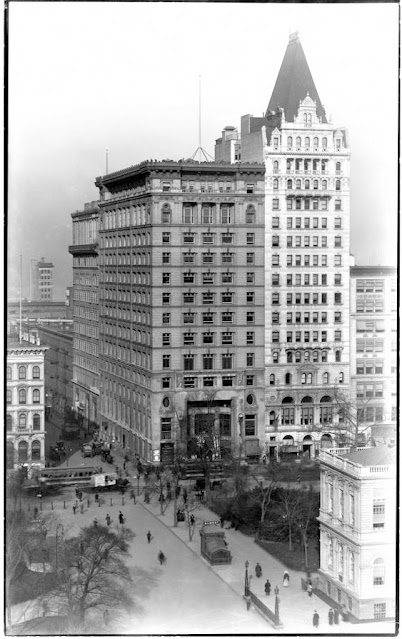 The Postal Telegraph Building was also completed in 1894 (original source unknown)
After having been home to banking firms for 70 years, the ground floor of 256-257 Broadway was leased to the Plymouth Shops, Inc. in July 1964 "for its largest downtown women's apparel shop," according to The New York Times.
The combined buildings were designated an individual New York City landmark in November 1991.
non-credited photographs taken by the author
LaptrinhX.com has no authorization to reuse the content of this blog
Posted by Tom Miller at 1:28 AM