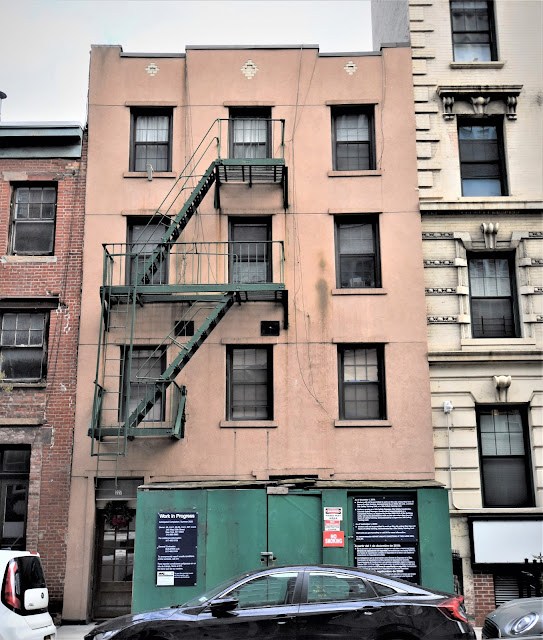 In 1811 Commissioners’ Plan laid out on paper the streets and avenues that would criss-cross Manhattan above 14th Street.  Country estates and farms, including the vast Stuyvesant holdings on the east side would one-by-one disappear as homes and businesses moved ever northward.

By the 1840's  a three-story brick house appeared on the former Stuyvesant land at what would be numbered 227 East 21st Street.  At 23-feet-wide, it was most likely the house of a merchant class family.

But the neighborhood would quickly change.  By the early 1850's the 21st Street house and at least three other nearby homes were owned by Bernard Earle, who operated them as immigrant rooming houses.   His name would appear in court documents for decades for the unsafe and unsanitary conditions of his properties.

In October 1860 No. 227 was inspected by Department of Buildings officials.  Their report showed “no ladders, or stairways leading to the scuttles.”  (Scuttles were the roof top hatches which provided both ventilation and escape.)   Two years later the situation was unchanged, a condition which the Department blamed on Earle’s “refusal or neglect to comply.”  The city initiated a suit against Earle and according to the Semi-Annual Report of the Department of Buildings on December 31, 1862, he "immediately complied with the requirements of the law,” .

The year that Earle finally complied with the fire laws, 227 East 21st Street was filled with Irish working-class immigrants.  In 1862 Trow’s New York City Directory listed the inhabitants as Patrick Quinn, a laborer; John Sweeney, a mason; John Denny, “moulder;” John Fitzpatrick, another mason; Margaret Fraley, “widow of Patrick,” who made candies; and Julia Kurley, widow of Andrew, who made her living doing washing.

The Draft Lottery was instituted in 1863 to increase the Union troops who were fighting in the South.  Corrupt handling of the procedure resulted in upper class families buying immunity for their sons.  The result was that the draft was bottom-heavy with indigent immigrants.  Among them was J. Gordon who was living in 227 when his name was called on August 26, 1863.

Although the tenants continued to be overwhelmingly Irish throughout the war years, by 1867 the first German name appeared.  John H. Hanekamp moved in and immediately took advantage of the opportunities in his new land.
The New-York Free Academy had opened on January 15, 1849 with the purpose of providing an education to young men who were financially unable to attend college.  It was now known as the College of the City of New York, and John H. Hanekamp enrolled, no doubt with the hopes to improve his life.  His dreams seemed to have come true.  He was still living here in 1871 (and still the only German among a tenant list of Irish) when he was now listed as "grocer."

On March 11, 1878 a baby boy was born to Philip and Mary Dunn.  Like Hanekamp, Joseph James Dunn (he later added an “e” to the family name, making it "Dunne") would elevate his station through education.  He attended the public school nearby on 23rd Street and would eventually study in the offices of McKim, Mead & White before launching his own architectural career.

The lower floor of the house was converted for business around 1882 when P. Vorrath opened his “bar fixtures, horse, wagon, etc.” business here.  A large bay door was installed for Vorrath’s wide-spread business.

Vorrach did not last long and soon the shop was taken over by the G. H. Witte & Brother grocery store.  George H. Witte lived  upstairs with his wife, Meta.  Their presence reflected the increasing German population of the area.

On January 14, 1888 The Evening World commented on the new store.  “G. H. Witte & Bro., grocers, of 227 East Twenty-first street, have their store packed as full of nicely selected goods as it will hold, and report that business is good, although it is quiet since New Year’s.”  The newspaper diplomatically described the store’s low-income patrons.  “Their customers are the families of men on salary, and who buy, not sparingly, but with a sensible view to economy.”

It would not be merely the wives of neighborhood laborers shopping here.  Bonfort’s Wine and Spirit Circular noted on February 10, 1888 that Witte had a license to sell alcohol—no doubt a lucrative sideline for the grocer.  His business was such that in January 1892 he hired architects Kroenke & Bindervald to install a new show window at a cost of more than $6,500 in today's dollars.

George Witte's landlords were Henry and Meta C. Plump.  They may very well have also been his in-laws; for in January 1897 they sold one half interest in the property to Meta Witte for $8,000.

The Germans heavily outnumbered the Irish in the area by now and it was reflected in the names of the tenants at 227.  Two of them, Henry Pfeiffer and John Schlemeyer, paid for their recklessness on July 5, 1891.  According to The New York Times the following day, the men “amused themselves by cleaning an unloaded pistol” in the house.  The problem for Pfeiffer and Schlemeyer was that the pistol was not unloaded.  The handgun went off, “and Pfeiffer received a severe wound in the breast.”  He was taken to Bellevue Hospital and Schlemeyer was arrested.

Along with the neighboring structures, the building was evacuated in fear that the tenement fire would spread.  The thought of losing what little possession they had was terrifying for the immigrant families.  The Times reported “The police early went through these houses and drove all the tenants out into the street.  There was a scene of wild excitement, many of the Italians insisting on going back to their flats and carrying out their most precious belongings.”

George H. Witte’s grocery business continued to succeed and in 1903 he picked up additional income “for furnishing supplies for schools,” as recorded in Department of Education records that year.

Life for impoverished families in the tenements and converted houses like No. 277 was grim.  In 1902 the building was deemed unsafe by Building Department inspectors.  And repairs could not fix the insufferable summer temperatures residents endured which caused misery and, often, death.  To provide temporary relief from the heat and misery of the tenements, churches annually hosted one-day picnic excursions.

In 1904 St. Mark’s Evangelical Lutheran Church announced that year's outing would take place on Wednesday, June 15. The side-wheeler The General Slocum had been hired for the 17th annual event and participants could expect a trip up the East River to a picnic grove.

The unmarried 26-year-old Meta Seeman, who lived here, made plans to go.  And George Witte allowed his 11-year-old son, John, to miss school that day so he, too, could join in the fun.  It was a regrettable decision.

The happy excursion ended in New York City’s greatest loss of life until the September 11, 2001 attacks on the World Trade Center.  Fire broke out below decks and spread with vicious fury.   Within 15 minutes The General Slocum had burned to the water line.  Only 321 of the 1,300 mostly women and children on board survived.  The rest perished by fire or drowning.  Neither Meta Seeman nor John Witte would return to East 21st Street that day.

As the decades passed, the block changed.  Twentieth century apartment buildings replaced the old structures.  But the little brick house at 277 somehow clung on.  Its residents continued to be low-income and not always law abiding.  On April 9, 1932 The New York Times reported on the arrest of 19-year-old Edward Lyons.  Lyons was involved in the payroll robbery of the United Parcels Service Company.   Both he and his accomplice, 16-year-old Lawrence Wright, were held without bail.  Wright confessed to having taken part in 16 hold-ups within the past year.

Four years after Lyons was arrested the house was converted to apartments—two per floor.  At some point the structure was slathered in a stucco-type material and a parapet with inset brick diamond shapes installed. 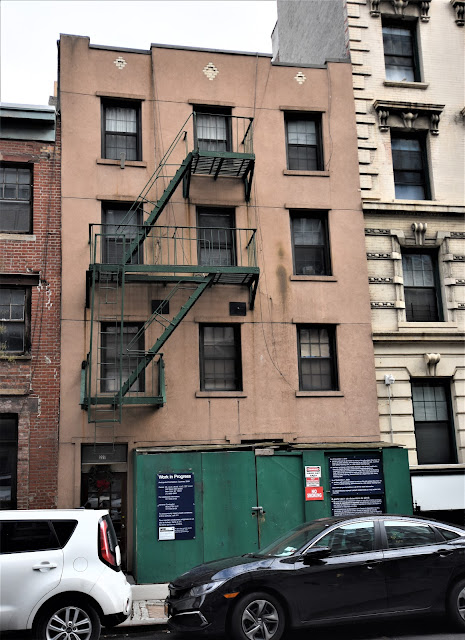 In 1963 Lillian Roxon would sign a lease here, bringing a touch of quiet celebrity to the old building.   Born in Savona, Italy as Lillian Ropschitz, she arrived in New York City in 1962.  She wrote articles for several publications about the hippie movement, but more importantly about the rock music scene.  In 1968 she began writing what would be the first rock encyclopedia. The massive Lillian Roxon’s Rock Encyclopedia was published in 1970.  The intense stress to make deadlines took a toll on Roxon.  She told an interviewer following the publication “It was a very high price to pay.  I lost my friends, my health, my looks.”

During the writing of the encyclopedia, Roxon developed asthma.  On the morning of August 10, 1973 friends entered her apartment at No. 277 East 21st Street to find the 40-year-old dead from an asthma attack.

The venerable house with its often miserable history is outwardly careworn.  Inside the squalor endured by 19th century immigrant families has been replaced by modern appliances, drywall and varnished floors.

photographs by the author
LaptrinhX.com has no authorization to reuse the content of this blog
Posted by Tom Miller at 1:19 AM