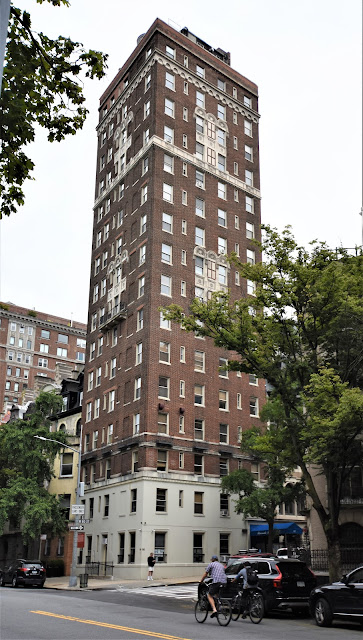 In the third quarter of the 19th century, real estate developers proposed that Riverside Drive would rival Fifth Avenue in terms of sumptuous mansions.  By the turn of the 19th to 20th century that prediction had come true.  Opulent homes, many of them free standing, lined the quiet thoroughfare along Riverside Park.  Among them were seven mansions designed and erected by prolific architect Clarence True at the northeast corner of Riverside Drive and West 80th Street in 1897-98. 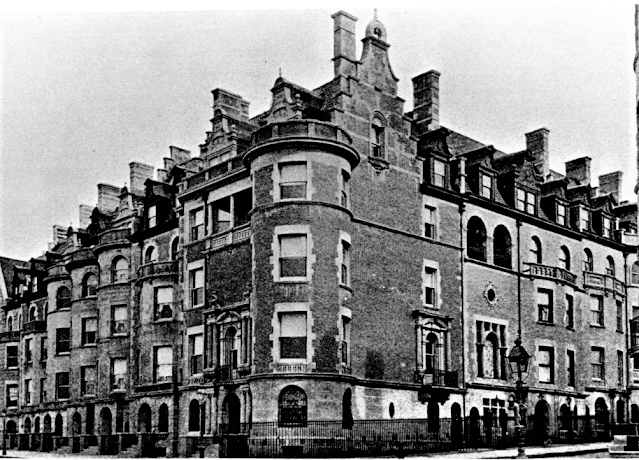 from "A True History of Riverside Drive," Clarence True, 1899 (copyright expired)
But times had changed following the end of World War I.  The 1920's saw private mansions being converted to rooming houses, or being demolished for modern apartment buildings.  Maruice Deutsch, however, had a slightly different idea.
On December 4, 1926 The New York Sun ran the headline, "Club Hotel Plan for Riverside."  Deutsch explained, "The ever increasing lure of urban life has brought to our large cities many young men and often before they are certain of employment or even before they know where they will find suitable lodgings."  He said that thousands of these men lived in boarding houses or furnished rooms, "generally in very old buildings."
His solution was a "club hotel" that would provide "the same type of comfortable and modern accommodations that has been found in the more expensive hotels and clubs...with rates as low as $7 to $15 a week a room."  (The highest rate would be equal to about $230 today.)  Deutsch went on, "Practically all rooms will have shower baths, lavatories, with hot and cold water and toilets, furnished."  There would also be a restaurant, swimming pool and gymnasium.
Deutsch was the principal in the Marken Realty Co. and he acted as his own architect for the project.  Clarence True's corner mansion was demolished to make way for the Riverside Tower Hotel.  Completed in 1927, the 16-story structure was faced in dark red brick above a two-story stone base.  The sparse decoration relied on artificial iron balconies at the fourth floor and actual versions at the eighth, and large terra cotta panels at the ninth and fourteen floors. 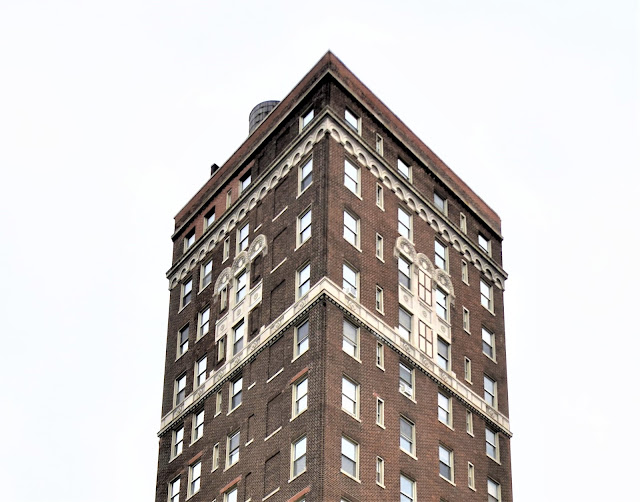 The concept of a bachelor "club hotel," quickly eroded and by 1930 the Riverside Tower was being operated as a residential hotel.  Now long-term residents enjoyed the amenities of hotel services not found in apartment buildings--like maid service.  Typical of the occupants were Charles L. Marks and his wife.  He was president of the Marks Chandler Company, manufacturers of shoes.
Also living here in 1930 was Dr. Michael Jaffer who had recently separated from his wife.  Jaffer's medical office was at 30 Fifth Avenue, just north of Washington Square.  It appears that the troubles between him and Clara de Muth Jaffer revolved around Edna McCaskie Dodds Taylor.  When Clara sued for divorce in May 1932, she charged that "her husband kept romantic trysts during the last two years with Miss Taylor at 80 Riverside Drive."
As the Jaffer drama played out in court, Patrick J. Flynn and his wife, Dorothy Jeans, had problems of their own.  Both were tap dancers (which explains their different surnames).  They had first met in 1924 while performing in show produced by Earl Carroll.
On the evening of September 7, 1932 Flynn was taking a shower when chaos erupted.  The Daily News reported he was "captured by police squads and detectives armed with tear gas bombs, rifles, riot guns and pistols."  Police had received notice from Springfield, Massachusetts that Flynn was wanted on assault and robbery charges.  He was described as "a dangerous fugitive and probably heavily armed."  Therefore, according to the Daily News, "No precautions were spared when the raid was made...at 80 Riverside Drive, where residents were thrown into consternation by the siege."  The naked but presumably clean Flynn "offered no resistance" and claimed he knew nothing about any charges against him.
Another resident, Gabriel Morosi, was arrested four years later, on March 29, 1936 for forging a $10,000 bank note.  But that paled to the scandal surrounding Rabbi Zeide M. Schmellner in 1938.
Schmellner was, according to the Daily News, "one-time Grand Rabbi of Rumania and an intimate of Europe's premiers and monarchs."  He shared his apartment with "his plump 36-year-old secretary, Mary Berd."  When he had first arrived in New York as head of the Jewish World Peace Movement, he was met with a band and a large delegation.  But things between him and his followers soured by 1938 when he was found guilty of misappropriating funds. 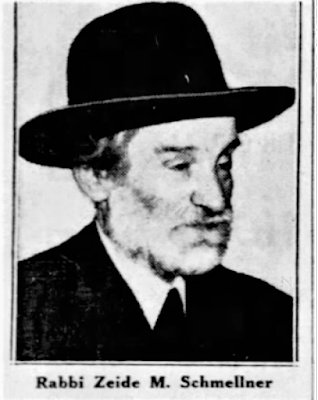 Daily News, August 17, 1938
Schmellner promised congregants he would invest their money.  But returns never came.  One of his congregants, Bernard Rudolph, said he turned over more than $60,000 to be invested in a munitions project."  The Daily News reported, "Much of the money, it developed at the trial, was deposited in the account of Miss Berd."  The 59-year-old rabbi was sentenced to three-to-six years in Sing Sing Prison and Mary Berd received one-to-two years.
Few Americans today realize the seriousness of the threat of enemy strikes on United States soil during World War II.  The American military had 1,800 observation posts along the Atlantic Coast from Maine to Virginia.  Lawrence McNally, who was a resident of the Riverside Tower Hotel, was New York County Commander of the American Legion.  The Daily News reported on October 10, 1941 that he had 32 Legionnaires working under him at the Empire State Building watching for planes.  "Assisting them are two amateur radio operators, one on the terrace and one at McNally's home, 80 Riverside Drive."
A renovation completed in 1952 resulted in eight suites per floor through the 12th, six each on the uppermost floors, and two suites in the new penthouse level.
Vera Massey moved into one of the suites in 1958.  The widow was a chorine--a chorus singer and dancer.   Amazingly, she performed in the chorus of the 1965 Broadway musical Baker Street at the age of 70.  It would be her last role, however.  Vera was crossing East 49th Street at Second Avenue on September 1 that year at around 11:30 p.m.  She was hit by an automobile and dragged for a block.  The driver, who never stopped, left Vera's body lying in the street.
In 1962 a radio station, WHBI began operating from the Riverside Tower Hotel.  Its tower was located atop the Ritz Tower Hotel at 57th Street and Park Avenue.   Interestingly, the owner and operator of the station, Don Lewis, was also the owner of the Riverside Tower Hotel.  Among WHBI's popular programs was The Lou LuTour Show.

The Westchester Observer, September 9, 1972
Everything went well until construction started on a building taller than the Ritz Tower in 1975.  Don Lewis said that the new structure "would make radio transmission impossible."  And so he proposed putting a radio tower atop the Riverside Tower Hotel building.  Community Planning Board 7 promptly rejected the idea, saying the tower "would be completely out of keeping with the tenor of the neighborhood."
To make matters worse for Lewis, he was currently battling to have his license renewed.  On January 27, 1975 the Daily News reported, "Last July, Judge Ernest Nash, an administrative law judge for the [Federal Communications] Commission recommended that the renewal application be denied."  The station survived and today operates as WXNY-FM--just not from the Riverside Tower Hotel.
In 1997 Don Lewis was grappling with another issue--the inability to accept transient guests.  He told John Holusha of The New York Times, that the Riverside Tower had 120 rooms, with 18 of them occupied by rent-regulated tenants.  "It would benefit the city mightily if more middle-class tourists were able to visit here," he said.
In fact, it seems transient guests were being accepted.  Several months earlier, on December 12, 1996, a Japanese tourist, Eiko Takamatsu checked in with her 8-month-old son.  She was already despondent over her impending divorce when, not long after arriving, she lost her credit cards.
At around 7:00 a.m. on December 15 she strapped her baby to her chest and walked to the Hudson River near 71st Street where she began chanting and dancing.  The Daily News reported that a dog walker, John O'Brien, "saw her and tried to coax her from the water's edge."  When he failed, he ran to find a policeman.
Just as Officers Sergio Hidalgo and Israel Dros arrived, the 28-year-old mother dropped below the surface of the river with her baby zipped inside her coat.  Dros leaned over the pilings of the pier and grabbed her, keeping her head above water.  The Daily News reported, "For 10 minutes the officers struggled with Takamatsu, who refused to hold on."  While they could not see the baby, they could hear its cries.
Eventually Takamatsu was pulled in, the baby was unstrapped and passed to Officer Marie O'Banyon.  She said later, "I just pressed the chest a little and I let the water come out, and then the baby made a little giggle."  It was taken to Roosevelt Hospital and then turned over to child welfare authorities.  The young mother was treated for hypothermia, then transferred to a psychiatric unit in the women's prison ward at Elmhurst Hospital Center.  She was charged with attempted murder, reckless endangerment and child endangerment.
In 2015 plans for a ground floor restaurant were made public and, just as had been the case in 1975, the locals were quick to react.  Neighbors claimed it would "destroy" the neighborhood.  Community Board 7 voted to disapprove a liquor license "after neighbors claimed the forthcoming eatery will fill the area with food smells, produce trash and create congestion in the quiet area," according to DnaInfo's Emily Frost on December 2. 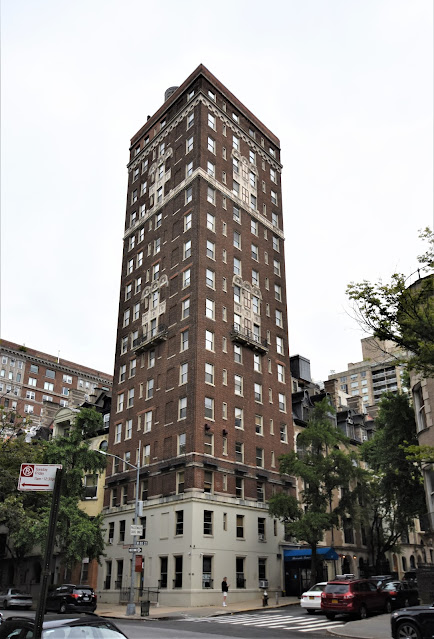 Other than a needless coat of paint over the stone base and necessary replacement windows, the Riverside Tower Hotel is remarkably unchanged since it first welcomed young men hoping for employment in the big city.
photographs by the author
no permission to reuse the content of this blog has been granted to LaptrinhX.com
Posted by Tom Miller at 1:53 AM