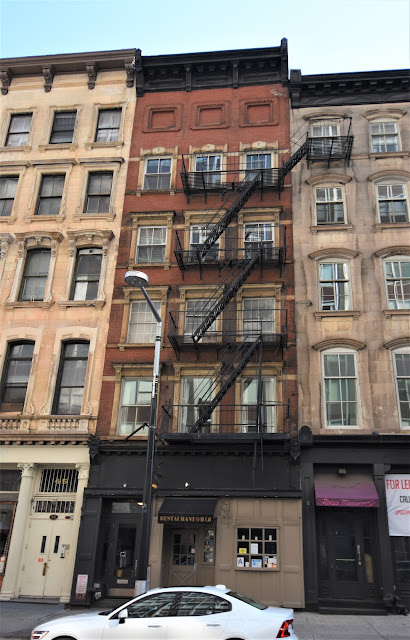 Charles H. Jones purchased the brick house at 43 Murray Street, formerly the home of Josiah S. Bennet, in 1851.  Converted for business, in the post-Civil War years it was occupied by the E. S. Osborne's Harness Warerooms.  Osborne held a sale in September 1875, advertising: "Best value ever given in New York City--Horse Blankets at agents' prices' good Stable Blankets $1.50; good outside Blankets, $2 up."  Quite possibly Osborne was liquidating his stock because he had been told to move.

Jones had leased the property to developer George V. Davis, who demolished the old building and hired architect Thomas S. Godwin to design a modern loft and store building on the site.   Construction began in 1876 and was completed the following year.  Godwin designed the six-story structure in the neo-Grec style.  Above the cast iron storefront, the red brick façade was trimmed in sandstone.  The architrave frames of the openings on the second through fourth floors wore prominent cornices, while the earred lintels of the fifth story windows were decorated with incised carvings.  Unusual brick frames enclosed the top floor windows (bricked shut today), and a cast metal neo-Grec cornice completed the design. 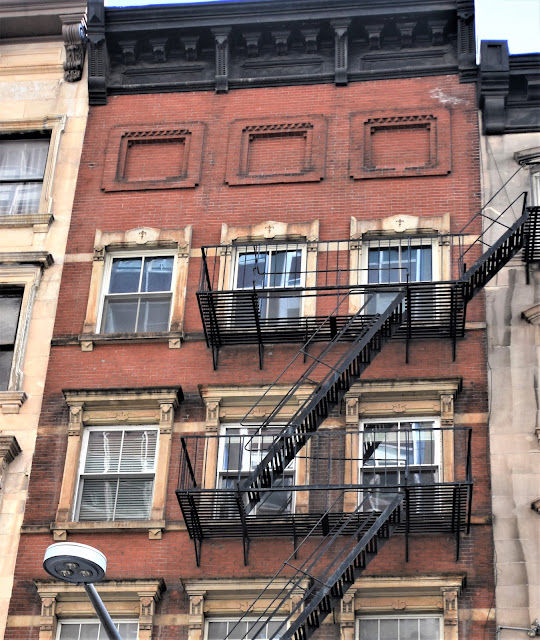 Among the early tenants of 43 Murray Street were Kimball, Gaullieur & Co., "segars;" Mitsui & Co., importers of Japanese "porcelains and fancy goods;" and William B. Dean, manufacturer of "bar and hotel glassware."
Kimball, Gaullier & Co. had been formed in 1873, just four years before moving in.  The Metropolis of To-Day said, "This firm have a national reputation as manufacturers of fine cigars, and as importers and dealers in leaf tobacco."  The firm relocated after 1884 when it became Kimball, Course & Co.
Another glassware firm, J. R. Gibney, was in the building by 1883.  Like William B Dean, its items were for practical use rather than decorative.  New York's Leading Industries in 1883 said his stock "includes complete lines of demijohns, bottles, and flasks, fruit jars, jelly glasses, goblets, tumblers, lamp chimneys and kerosene goods generally." 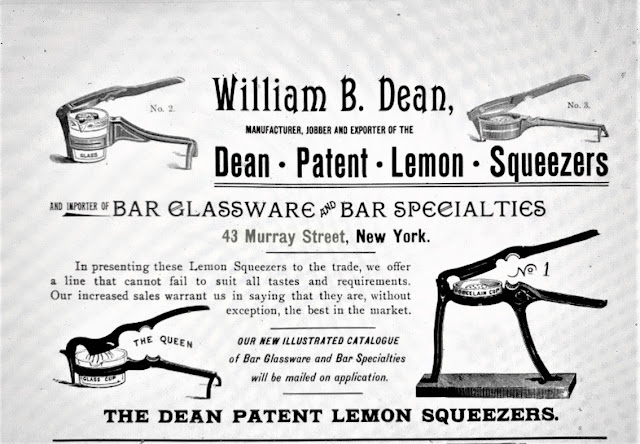 William B. Dean combined its glassware with metal to make these bar squeezers.  The House Furnishing Review, July 1893 (copyright expired)
An unexpected tenant was the publisher of the newspaper Le Messager Franco-Americain.  The 1883 American Newspaper Directory described it as "French, republican; daily four pages, semi-weekly twelve pages, weekly sixteen pages."  Founded by H. de Mareil in 1859, a yearly subscription for the semi-weekly cost the equivalent of $269 today. 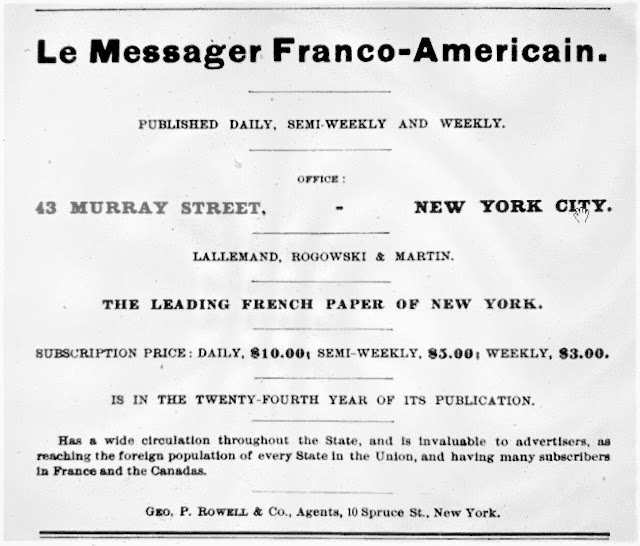 American Newspaper Directory, 1883 (copyright expired)
De Mareil sold his newspaper (along with the "furniture, machinery, type, fixtures, good-will and title") in February 1883 to Lailemand & Martin for $30,000 (about $80,700 today).  The new publishers quickly found themselves in trouble.  The New York Times said on August 8, 1883 that the business "had been conducted successfully until last February," but now it "was being run at a loss and the proprietors became in arrears to their employe[e]s to the amount of $600."  Lailemand & Martin attempted to sell the newspaper on August 7.
It was a last-minute attempt to avoid the inevitable.  Four days later the newspaper was sold at a foreclosure auction.  The purchaser, Hector Rogowski promised to pay the employees, to pay the $28 light bill so the printing could continue, and to settle the outstanding rent bill of $200.
But a year later things had not improved.  On October 4, 1884 The Evening Post reported, "The editors, reporters, and printers employed in the office of Le Messager Franco-Americain, at No. 43 Murray Street...are still on strike.  The strikers number about thirty, and refused to work on October 1st because they had received no pay since September 3d."  The newspaper closed permanently shortly afterward.
C. A. Mann & Co., perfume makers, were here by 1886.  At a time when street odors of rotting garbage and horse manure offended delicate sensitivities, the firm produced "Triple Extracts" especially "for the handkerchief."  A refined lady could hold a pre-dipped hanky to her nose when odors were encountered.  An advertisement in 1883 promised, "Our perfumes combine richness of fragrance with delicacy and permanence of odor."  Among the scents listed as "Perfumes of the First Rank" were Lady of the Lake, Prairie Flower, and New Mown Hay.
In 1885 Charles H. Jones sold the building to Edith Tinker.  She sued the Metropolitan Elevated Railway Company in 1894 for damages to her property.  In her suit she claimed her property extended to the middle of Murray Street.  It did not, of course, and her suit fell flat.
The post-World War I years saw publisher O'Shea & Co., the patternmaking firm of John Kunst Co., and bookbinder N. Kantor in the building.  In 1921 the neighborhood was plagued with a gang of safe crackers.  Detectives used the Woolworth Building as a vantage point to scan the rooftops with field glasses in hopes of catching the crooks in the act of breaking into "scuttles," or rooftop hatches.
The New York Times reported on May 12 that while they detectives scanned the buildings, the thieves "attacked eight safes in five offices and escaped with money and jewelry valued at $260."  The amount stolen paled to the damage inflicted on the safes.  To date the damage to the 22 safes "would amount to approximately $15,000," said the article.  Unfortunately for N. Kantor, his was one of the safes to be broken into.  The crooks made off with $60 in cash.
In 1924 John Kunst, founder of the tool and die manufacturer John Kunst Company, purchased the building.  It was probably at this time that the top floor windows were bricked in.  He moved his factory into the upper floors and around 1929 renovated the ground floor for a restaurant owned by A. R. Mitchel.  A decade later the space became the Alanjo Cafe and Restaurant run by Al Klose ("better known as just Al," according to The New York Sun on December 12, 1939).
A renovation to the building completed in 1965 updated the ground floor restaurant.  The Blarney Star Bar and Grill would be a popular destination for decades.  There were now "storage" on the second and third floors and a tool factory on the top two floors.
On April 30, 1971 transit patrolman John O'Shaughnessy stopped in the Blarney Star after getting off duty.  At around 1 a.m. two armed men stormed in and announced, "This is a stickup."  O'Shaughnessy drew his revolver and a gunfight ensued.  O'Shaughnessy was hit in the hand and two patrons were wounded.  William McCarthy was shot in the neck and Francis MacIntyre in the leg.  One of the hold-up men was fatally wounded and the other escaped.  O'Shaughnessy was cited for his action on June 5, 1972.
The upper floors were converted to apartments--one per floor--in 1982.  The Blarney Star forged on as usual.  Best known for its once-a-week music, on March 17, 1995 The New York Times reported on the Irish music of Brian Conway, John Nolan and Don Meade.  "In Ireland, a good-time jam session in a pub is known as a craic, and that's just how this concert promises to end."  And on June 5, 1998, the newspaper noted that Joe Burke, "a leading figure in traditional Irish music," would be playing there.
The September 11, 2001 attack on the World Trade Center interrupted the good times at the Blarney Star.  On October 19 The New York Times reported, "The Blarney Star, at 43 Murray Street, which booked Irish traditional music once a week, is in an area still officially closed to all but locals and relief crews and has been forced to relocate its music events temporarily to the Irish Arts Center."
Music was back in the Blarney Star in May 2002 when Irish singer Andy Irvine performed.  Then, after having been in the space for four decades, the Blarney Star made way for Woodrow's Restaurant around 2012.
photographs by the author
LaptrinhX.com has no authorization to reuse the content of this blog
Posted by Tom Miller at 1:25 AM