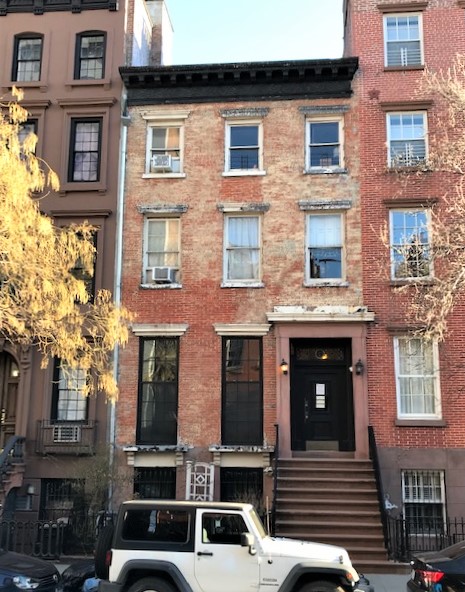 The brownstone platforms on which the parlor floor balconies sat are intact.
In 1835 Joseph and Isabella Tucker purchased six vacant lots from Clement Clarke Moore on the north side of West 22nd Street between Eighth and Ninth Avenue.  A builder and mason, Tucker erected a fine 37-1/2 foot wide mansion for his own use at what would be 337 West 22nd Street in 1836, along with a similar one next door.  It would be another five years before the remaining plots were filled.

Among the houses completed in 1841 was 253 (renumbered 349 in 1868).  Faced in brick and trimmed in brownstone, the Greek Revival style house rose three stories above the English basement.  Handsome cast iron railings graced the stoop and areaway.  The full-length parlor windows had iron balconies.
The house was originally home to Tillinghast and Joseph B. Tompkins.  Born in Rhode Island, two of the 14 children of Gideon and Cynthia Brownell Tompkins, the brothers were partial owners of ships registered in New Bedford, Massachusetts, including the Jeanette, the Saratoga, the Alexander Coffin, the Amethyst and the Drago.
The West 22nd Street house was well-filled with children.  Joseph and his wife, the former Angelina Nelson, had two daughters, Mary Frances and Emily B., who were eight- and six-years-old respectively when they moved in.
Tillinghast's first wife, Susan H. Drew, had died in 1824, three years after their wedding.  He married Charlotte Merrill in 1833 and had three children--Charlotte and Frederick, both of whom were toddlers, and an infant, Martha.  Two years after moving into their new home Hamilton Bullock Tompkins was born, making a total of six young children in the house.
It is uncertain exactly how long the Tompkins families remained in the West 22nd Street house, but they had returned to Newport, Rhode Island by the early 1850's.  Tillinghast and Charlotte erected a stylish Italianate style home there around 1854 which survives. 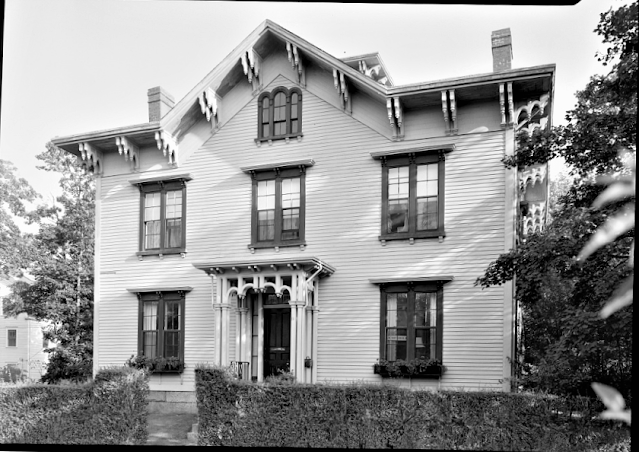 The Tillinghast Tompkins house in Newport.  photo by the Historic American Buildings Survey, from the collection of the Library of Congress.
In 1857 William A. Thompson and his family were living here.  That year he was appointed secretary of the International Bridge Company.  The firm was formed specifically to construct a railroad bridge between New York and Canada.
The family leased a room to publisher John Bigelow in 1857 and '58.  Born in 1817, he had already had a fascinating career.  In 1845 he was appointed inspector of Sing Sing Prison where he instituted penal reform.  William Cullen Bryant brought him in as partial owner and editor of the New York Evening Post in 1848.  Just prior to moving into the 22nd Street house he had broken from the Democratic Party because of its pro-slavery stance.  Later, Abraham Lincoln would appoint him consul general in Paris.
The Thompsons continued to take in one boarder at a time over the years.  In 1859 John I. Deen rented a room.  He was a tobacco merchant and a director in the New-York City Insurance Company.  The following year widow Anna A. Sackett lived with the family, and in 1863 and '64 Richard Mentor Henry boarded in the house while he attended Columbia College.
In preparing to move, it was common in the 19th century for families to auction off all their household belongings and start over in their new home.   On April 26, 1867 an auction of the "elegant household furniture" was held in the Thompson house.  Included were Brussels carpets, "rosewood suite in brocatel," center and side tables, and black walnut and mahogany bedroom furniture.
The house next became home to the young attorney Frederick G. Gedney and his wife, the former Margaret (known as Maggie) M. Hutton.  Moving in with them was the well-to-do builder, Andrew Hutton, presumably Maggie's brother.
Gedney had been admitted to the bar in 1862 and the next day "marched to the war with his regiment," according to Illustrated New York, The Metropolis of Today.  When he purchased the West 22nd Street house he was working as a city department reporter of The New York Times.  He later moved to the New-York Tribune. 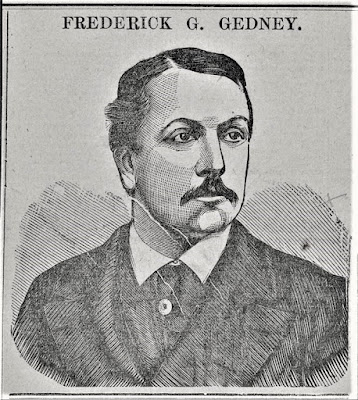 from the collection of the New York Public Library
Andrew Hutton was well-respected within the building community.  Born in Scotland, he had started his career as a builder in 1847 and was by now an active member of the General Society of Mechanics and Tradesmen.
Gedney changed career paths in 1873 when he was made attorney to the Department of Buildings.  In 1876 he was elected a judge of the Eighth District Court.  He was one of the three men who organized the Republican Club of New York City in 1879 and was its first president.  Illustrated New York, The Metropolis of Today said of him in 1888, "he is to-day recognized and respected by the entire community as a brilliant lawyer, upright judge, honest official and patriotic citizen."
Not everyone was so glowing in their assessment of him.  On October 17, 1887 The Evening World reported, "Ex-Senator Frederick S. Gibbs and his friends have declared war against Civil Justice Frederick G. Gedney in the Eighth District.  They say that if Gedney is renominated they will use scalping knives on election day."  Gedney was re-nominated and, again, won his seat on the bench.
Gedney recalled his war experiences in his 1890 book, Shenandoah, or, The Horizon's Bar: A Story of the War.
Never married, Andrew Hutton died at the age of 82 on December 15, 1891.  The New York Herald commented that he had successfully conducted his business for over half a century, adding, "At the time of his death he was the oldest member of the General Society of Mechanics and Tradesman."
It may have been Frederick Gedney's declining health that prompted him and Maggie to sell 349 West 22nd Street in 1895.   Robert Von Cleff paid $20,000 for the property--more than $625,000 in today's money.  Four years later, on February 25, 1899, The Courier-News reported, "Frederick G. Gedney died on Thursday night in the Bloomingdale asylum...When in his prime he was considered one of the best after dinner speakers in the city.  In recent years his political ventures were not successful."
It was around this time that the house was gently updated with a new cornice that included a swirling foliate frieze, and cast metal lintels.  Perhaps at the same time the stained glass transom over the entrance was installed. 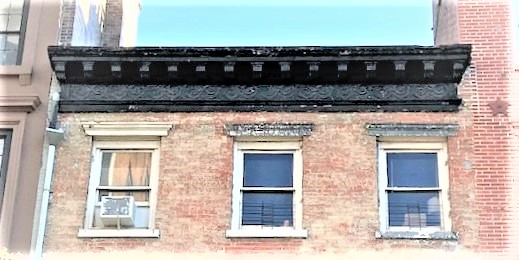 Robert Von Cleff lived in New Jersey and it appears he purchased the house for his daughter, Celine, and her family.  She had married Dr. Louis H. A. Schneider in 1871.  The couple had eight children.
The Schneider's son, Louis, Jr., was a student at the De Witt Clinton High School in 1912.  The crafty teen set out to discover who was responsible for a string of stolen coats from the school that year.  On November 12, the New York Herald reported, "Noel Shelton, eighteen years old, residing in the Mills Hotel No. 3, was held in $500 bail in the Men's Night Court on a charge of stealing an overcoat belonging to Lewis Snider [sic] of No. 349 West Twenty-second street."  The article said that Schneider "had set a trap for Shelton."
A month later Dr. Schneider was called to the George Brindle house a block away at 352 West 23rd Street.  As the family was eating dinner, Brindle's 18-year-old sister-in-law, Marion Brindle, passed out.  Schneider found and dressed two puncture holes in her left arm.
Marion worked as a stenographer at "the Japanese house of H. Oshari & Co." on Broadway, according to The New York Times on December 31.  Schneider was reluctant to suggest the girl had injected drugs into her arm.  The article said he "refused to say that a poisoned needle had been used."  Marion insisted that someone had stabbed her with a sharp instrument on her way home from work.  Detectives were not convinced.  "Inspector Faurot could not see how a needle could make a wound on the girl's arm through her heavy coat," said The Sun.  "Detective Griffin, who was working on the case, was of the same opinion." 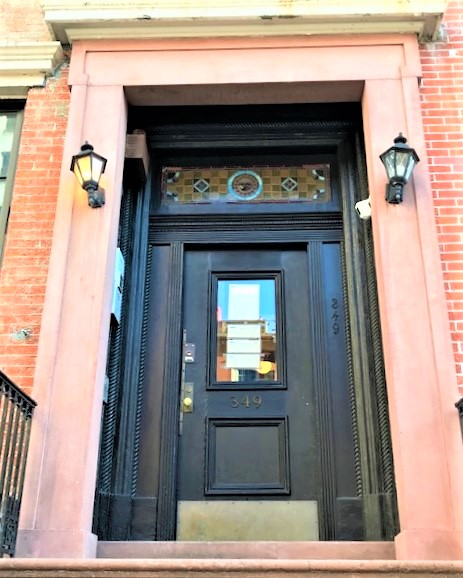 The pretty stained glass transom is late 19th century.  The unfortunate door much is more recent.
The Schneider's 15-year-old daughter, Thinie Lillian, died on May 20, 1916.  Her funeral was held in the parlor two days later.
In the summer of 1918 Dr. Schneider fell ill.  He died on August 21 and his funeral was held in the West 22nd Street house two days later.  The family remained here at least until Depression years.
A renovation completed in 1971 resulted in one apartment per floor.  More recently the house was remodeled to accommodate a duplex in the basement and parlor floor, one apartment on the second, and a duplex on the third a new penthouse level, unseen from the street.
photographs by the author
no permission to reuse the content of this blog has been granted to LaptrinhX.com
Posted by Tom Miller at 1:39 AM