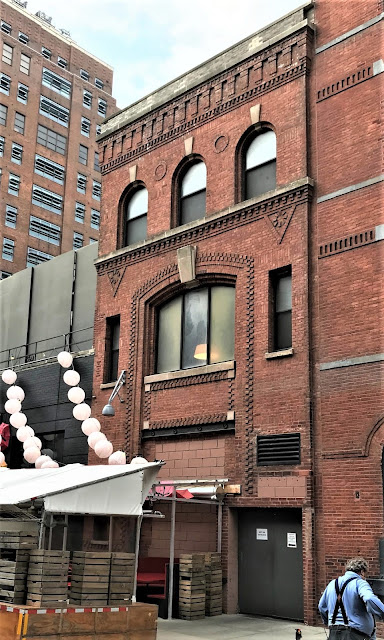 Tragedy occurred in the house at 408 West 16th Street on Friday, February 15, 1861 when three-year-old Mary Reardon overturned a kettle of boiling water onto herself.  The toddler survived what must have been an agonizing two days before succumbing the following Sunday.
The house where the Reardon family lived was 25-feet-wide, faced in brick and four-stories tall.   By the turn of the century the neighborhood, two blocks from the riverfront, had become heavily commercial.  On May 20, 1905 the Real Estate Record & Guide reported that the "front and rear buildings" at 408 West 16th Street had been sold to Steinhart Bros. Co.  "Plans are to be drawn for a new 5-story stable, which will be erected on the lot," said the article.
Steinhart Bros. Co. were "importers, distillers, and blenders of  fine whiskies."   Its operation was located relatively nearby at Ninth Avenue and 13th Street.  The firm contracted the architectural firm of Boring & Tilton to design its stable, the plans of which had been scaled back by July.  They now called for a three-story brick structure.
Completed in 1906, it was an especially pleasing design.  Using the common configuration of a centered truck bay flanked by a window and a door, the architects utilized creative brickwork to delightfully decorate the façade.  The ends of slightly projecting bricks created a two-story arch that framed the central bay and the loft doors above.  Between the second and third floors was an intermediate stone cornice supported on a brick corbel table.  (With the sills and keystones, it represented the sparing use of stone.)  Directly below were brick rondels within triangles.  Two larger brick rondels sat between the arched openings of the third floor and a complex cornice, entirely executed in brick, completed the design. 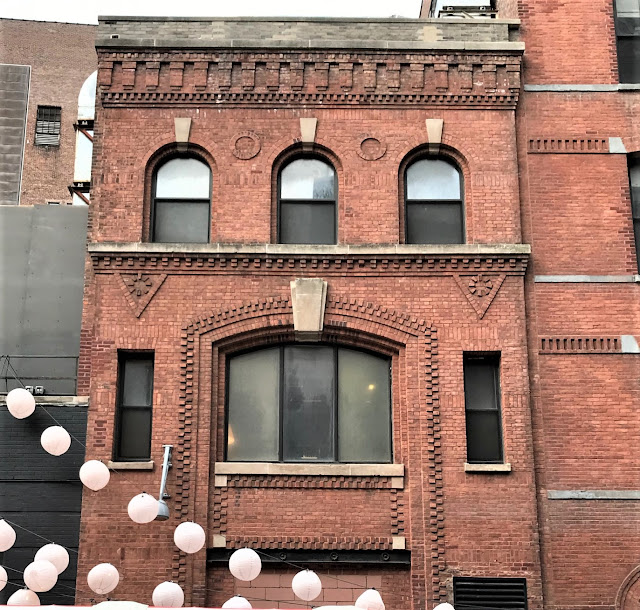 Driving a wagon loaded with heavy barrels and crates of whiskey bottles required a veteran.  An advertisement on September 19, 1909 read, "Drivers Wanted: Experienced truck drivers, double team, steady work, good pay.  Apply at Stable, 408 West Sixteenth St."
With his job as night watchmen, William Ginsberg and his wife, Annie, received the perk of the third floor living quarters.  In the summer of 1914 Ginsberg underwent an operation and was hospitalized for several weeks.  On August 14 Annie told neighbors "that she was greatly worried," as reported by The Evening World.  No one saw Annie again.  She was found four days later, on Tuesday afternoon, dead in her rooms.  The Evening World reported "There were no apparent bruises," and, pending an autopsy, the journalist suggested a hemorrhage had caused her sudden death.
During World War I in August 1918, the British warship H.M.S. Ceramic pulled into Pier No. 58 on the Hudson River.  Among the crew was 27-year-old George Girk, who was suffering from what today we recognize as post traumatic stress disorder.  Employees in the 16th Street stable rushed to his aid when the sailor collapsed on the sidewalk just outside.  The Evening World reported he was taken to Bellevue Hospital, "suffering from the effects of shell shock in foreign waters."
In the post-World War I years the stable was converted to a garage, as automobiles quickly replaced horses.  The National Biscuit Company purchased the six-story warehouse next door at 410-416 West 16th Street in October 1920.  The Record & Guide pointed out that the firm now owned the entire block, with the exception of three buildings, including the "3-story garage 408 West 16th St."
At the time Steinhart Bros. Co. had a significant problem: Prohibition had gone into effect on January 17 that year.  On September 16, 1921 Caesar O. Rudolph received a "removal permit, to remove liquor from premises 408 West 16th Street, to the Rudolph Warehouse" in New Jersey.  Presumably the valuable whiskey was destroyed.
Steinhart Bros. had already sold the garage at the time.  On August 8, 1921 the New-York Tribune reported that the National Biscuit Company "has enlarged its realty holdings in the Chelsea section by the purchase of the three-story building...at 408 West Sixteenth Street."  Renovations, completed in 1922, resulted in an addition (later removed) and warehouse space throughout.
The National Biscuit Company (which would become Nabisco in 1948) hired architect Louis Wirsching, Jr. in 1936 to do additional updates.  None of the renovations effectively changed the exterior.  Later Nabisco used the buildings as a "loading room," and it is still used as a loading area today. 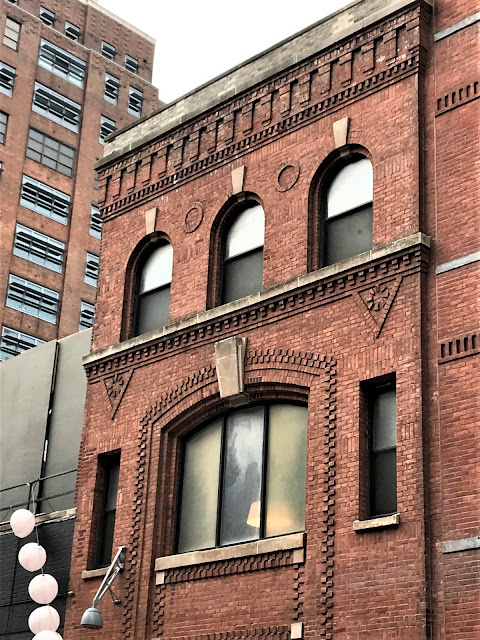 Overwhelmed by the massive warehouse buildings around it, the 1906 handsome Steinhart Brothers stable deserves a long-enough pause to fully appreciate its handsome detailing.
photographs by the author
no permission to reuse the content of this blog has been granted to LaptrinhX.com
Posted by Tom Miller at 2:31 AM