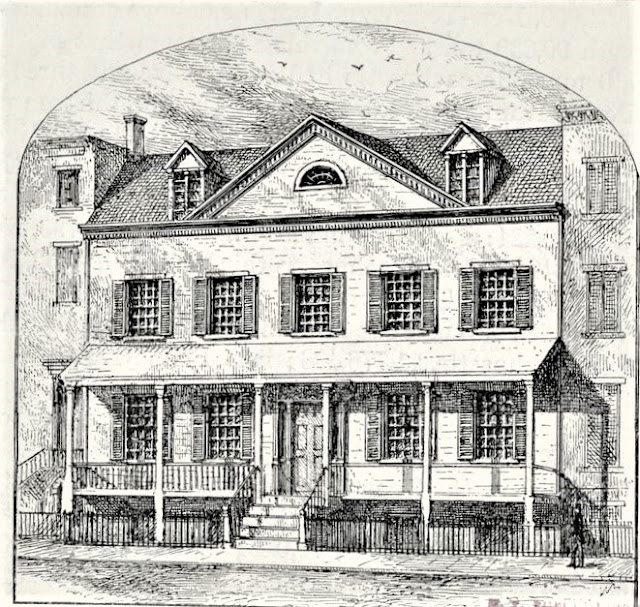 By the time this etching was made row houses had crowed in around the former country home, and the hip roof was updated to a peaked roof.  from the collection of the New York Public Library

The Bayard family had deep roots in America.  The first arrival was Ann Stuyvesant Bayard, sister of Director-General Peter Stuyvesant.  She landed in New Amsterdam in 1647, approximately the same year her husband, Samuel Bayard, died.

Nicholas Bayard owned thousands of acres of land outside of Manhattan by the end of the 17th century.  He established an estate near what would become Greenwich Village around 1691 and erected a fine home there.  The farm was acquired by William Bayard sometime before 1770.
William Bayard, who was born in 1729, was married to Catharine McEvers.  The couple had three children, Samuel Vetch, William Jr., and Mary.  The family used the three-acre farm overlooking the Hudson River as their "country seat."  Most wealthy New Yorkers maintained summer estates, sometimes called farms, where they could escape the stifling heat and smells of the city.
The Bayard farm abutted the Ludlow estate.  Jane Street, a country lane running essentially east-west which lead to the Jayne Farm, separated the two properties—Bayard’s being to the north and Ludlow’s on the south.
The clapboard house Nicholas Bayard had constructed was fronted--as were nearly all country homes--by a long porch, or veranda, where cooling breezes could be enjoyed.  A hipped roof, typical of Dutch design, provided an ample attic level. 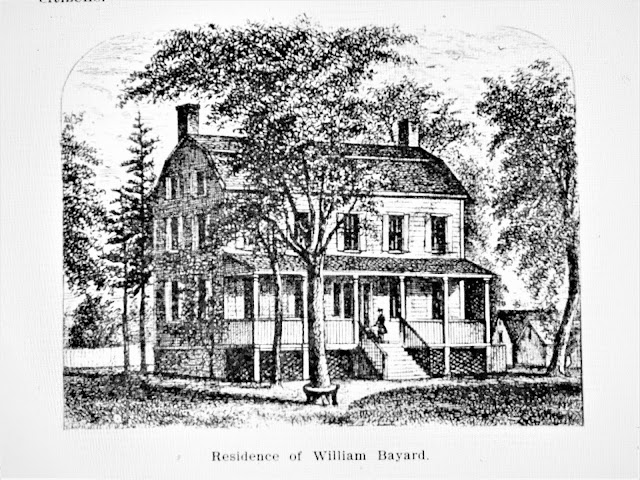 from Historic Homes and Institutions and Genealogical and Family History of New York, 1907 (copyright expired)
The sumptuous nature of Bayard’s home was hinted at when newspapers reported on a lightning strike to the residence on June 10, 1775:

Last Sunday week the House of William Bayard, Esq., at Greenwick [sic], was struck by Lightning, which occasioned considerable damage.  In several apartments large Pier glasses were broken, and a quantity of silver plate contained in a chest was pierced and otherwise affected without doing the least injury to the chest.

It may have been at this time that the house was given a sensitive Georgian makeover.  The Dutch roof was replaced with a peaked version, with a classic gable and dormers.  Otherwise it kept its original appearance, including the welcoming veranda.
Bayard had been elected to the 1765 Stamp Act Congress and he served on the committee that drafted a protect to Parliament against taxation without representation.  But  his passion for colonists' rights did not extend so far as rebellion.  When the American Revolution broke out he remained a Loyalist--to the point that in 1776 he aided the British soldiers who occupied New York.
Whether history brands one a hero or a scoundrel depends on which side wins the war.  In Bayard's case it did not go well.  On March 6, 1777 the Provincial Congress appointed Commissioners to "take into their custody & possession all the personal property" of loyalists with ten days' notice.  The families were allowed to keep their clothing, a few pieces of furniture and three months' provisions.  Everything else was sold at public auction.
The Bayard farm was confiscated and sold to Dr. Charles McKnight.   And then, according to historian William Smith Pelletreau in his cumbersomely titled 1907 book Historic Homes and Institutions and Genealogical and Family History of New York, "It was probably purchased from him by William Bayard, Jr., and it was his country seat."
William had remained in New York during the Revolution when the rest of his family had fled.  Educated as an attorney, he co-founded the mercantile firm of LeRoy, Bayard & McEvers.  In 1783 he had married Elizabeth Cornell and the couple had seven children.
That the Loyalist stain on the Bayard name had been erased was evident in William's close personal relationship with Alexander Hamilton--one of the country's founding fathers and a member of Washington's first Cabinet.
At dawn on July 11, 1804 Hamilton and Vice President Aaron Burr faced off in a duel with pistols on the bank of the Hudson River in Weehawken, New Jersey.  On the dock on the Manhattan side William Bayard, Jr. waited for news and to provide any necessary aid.  Eventually, he saw a boat approaching from the other side.  In it was the paralyzed Hamilton, shot in the spine.
Hamilton was brought to the Bayard house.  Family and friends streamed in over the next 31 hours, during which Hamilton reportedly suffered greatly.  He died in the Bayard house at 2:00 on the afternoon of July 12. 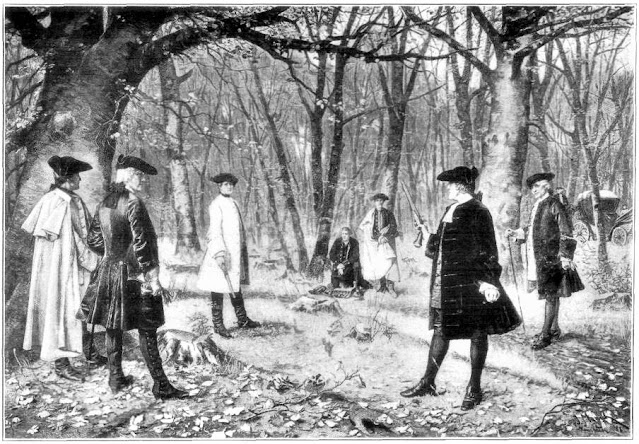 The Burr-Hamilton duel as depicted by J. Mund. from Beacon Lights of History, 1902 (copyright expired)
Catharine Bayard died in 1814, followed by William Bayard, Jr. in 1826.  In 1833, according to William Smith Pelletreau, "the heirs of William Bayard, Jr. sold the house and land to Francis B. Cutting for about $50,000."  (That amount would be just over $1.5 million today.)
Two years later Cutting divided the estate into 125 lots which were then sold at auction.   The venerable Bayard house survived for only a few more years, its approximate site occupied by the house at 82 Jane Street today.  (Interestingly, it is directly opposite the house at 83 Jane Street erected by William Bayard, Jr.'s son, Robert, in 1853.  The house is repeatedly, and incorrectly, touted as the spot where Alexander Hamilton died.) 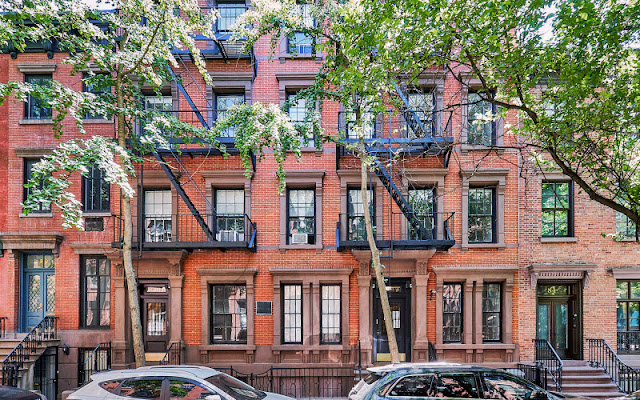 photo via brodsky.com
LaptrinhX.com has no authorization to reuse the content of this blog
Posted by Tom Miller at 1:07 AM