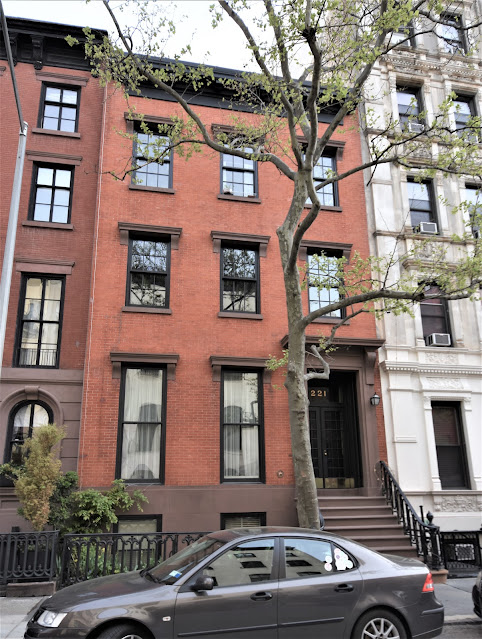 In 1859 Lord & Taylor opened its newest store, a five-story "marble emporium" on the corner of Broadway and Grand Streets.  The upscale business had a problem with shoplifters and on January 15, 1865 The New York Times entitled an article, "Mssrs. Lord & Taylor Robbed Again."  The article reported that "Mr. Thomas Varker, manager of Messrs. Lord & Taylor's Grand-street store, appeared at the Essex Market Police Court, and made oath that [Charles C.] Marsh had at various times stolen dress goods, scarfs, ribbons, broadcloth, etc., from his employers."
Thomas Varker and his family lived in the comfortable brick-faced house at 221 East 17th Street along a quiet, affluent block.  Three stories tall above an English basement, it featured full-length parlor windows.  Bracketed brownstone cornices topped each of the openings.
The house was filled with life (and, no doubt, noise).  Varker and his wife, the former Misha Rutter, had nine children.  Their country home, Sunnybank, was in Nyack, New York.
As the children matured, the boys went on to higher education.  In 1873 Thomas Corwall Varker was enrolled as a preparatory student at Columbia College.  Tragically, he died on September 22, 1876 at the age of 20.  His funeral was held in the parlor of 221 East 17th Street on September 26.
In 1882 the Varkers moved far north to 131 East 60th Street.  The East 17th Street house became home to William Baumgarten, a furniture designer and decorator with Herter Brothers, the most influential interior design firm of the period.  He and his wife, the former Clara Frankel, had two children.
The Varkers' decision to move may have been prompted by the upheaval going on next door.  In 1882 construction was begun on the St. George Residence, described by The New York Times as "a pretentious apartment house."  Touted as "completely fireproof," the seven-story building caught fire on April 7, 1884 and was all but destroyed.
Fearing the worst, fire fighters banged on the door of 221 East 17th Street and ordered the family out.  The New York Times reported, "It was feared at one time that the entire building would be destroyed, and the side walls would fall outward and crush the fine residence of William Baumgarten, No. 221 East Seventeenth...Mr. Baumgarten had his valuable oil paintings, silverware, and other property removed to a neighbor's house."  Although the St. George was essentially gutted, the Baumgarten residence was spared.
In 1893 Baumgarten formed William Baumgarten & Co., which focused on the reproduction of Aubusson-type tapestries.  Around the same time he sold the 17th Street house to Sarah Ludlam Macy, the widow of banker Charles A. Macy who had died in 1875.
Sarah Macy leased the house in September 1900 to Dr. John Horn.  Horn was what is today known as an otolaryngologist, a specialist in diseases of the ear, nose and throat.  An 1885 graduate of New York University, he wrote many medical texts on the subject and would eventually invent the artificial eardrum.  He and his wife had two sons and a daughter.
At the time an outbreak of smallpox was being seen in New York and on March 14, 1901 The New York Times reported the terrifying news that "Ida Wulf, twenty-three years old, of 221 East Seventeenth Street" had died of the disease.  Dr. Horn apparently flew into action.  The next day a correction appeared in the newspaper:

Owing to a typographical error in The Times of yesterday morning it was stated that there was a case of of smallpox at 221 East Seventeenth Street, which is the residence of Dr. John Horn.  There is no smallpox at that number.

In 1906 Sarah L. Macy's estate sold the house to Algernon S. Bell for $30,500--about $895,000 today.  He leased it to Dr. Arthur Zentler, a graduated of the Philadelphia Dental College, that same year.
Renting a room in the house in 1911 was a nurse, Mrs. Ingsborg C. Vind.  The 33-year-old had a baby in June that year.  It is unclear whether her husband had died, or if the two were separated.  In either case, the mother became gravely depressed after the birth of the child.  On October 2 the New York Herald reported that she was found dead in her bed, having died from inhaling gas.  "Her two-months-old child lay dead beside her," said the article. 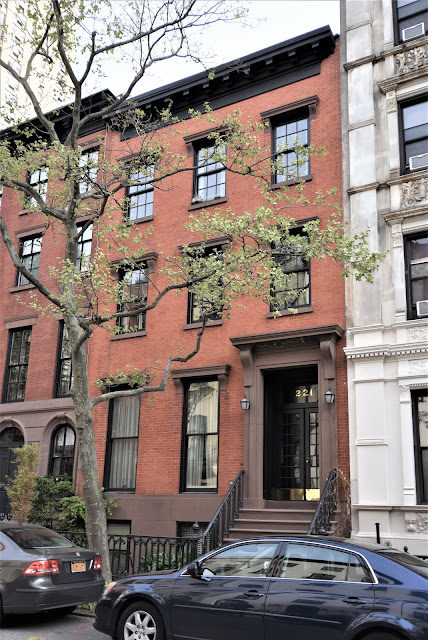 By 1915 the house was home and office to another doctor, William Llewellyn Owen.   The 38-year old physician was arrested on December 16 "after a raid in his office," as reported by The New York Sun.  Three detectives from the narcotic squad charged him "with having made no records of the disposition of 1,673 grains of heroin and thirty-seven grains of cocaine since December 1."
He was released on $1,000 bail, but was arrested only a week later for mail fraud.  On December 17 The New York Press explained that he advertised in foreign-language newspapers the sale of a book, Samaritan; or, How to Save Your Health, for 25 cents.  He "presented to the purchasers that he was able to cure all diseases of the stomach, liver, lungs, and heart, as well as rheumatism, which other physicians had pronounced incurable."
When buyers wrote back, he would pronounce their conditions "serious," accompanied by a $12 C.O.D. package of medicine.  (The amount would be about $315 today.)  In cases when the recipient refused the shipment, Owen directed the Post Office to destroy the package, "because it was not worth the return charge."
Surprisingly, Owen was still operating his practice in March the following year when he accused Walter Morkovich of extortion.  "Dr. Owen said that Morkovich, representing himself to be secretary of a Serbian society, had called on him and said that he had not properly treated one of his Serbian patients.  He demanded $55 in settlement, which Dr. Owen paid."
His close call in 1915 had not discouraged Owen and he continued with his mail fraud.  Finally, on January 9, 1918 The Evening Telegram reported, "The firm of Professor Owen, Inc., of No. 221 East Seventeenth Street, which asserted in advertisements in foreign newspapers that it 'would cure all the ills flesh is heir to,' ceased to do business to-day when its owner, Dr. William Llewellyn Owen and two assistants were arrested on a charge of conspiracy to use the mails to defraud."
The newspaper said, "Dr. Owen is said to have made a fortune out of his business.  Thousands of boxes of small pills, in all colors of the rainbow, were found in the offices."  Owen pleaded guilty and was taken to Bellevue Hospital "pending a decision as to his mental condition."
Afterward the house was operated as an upscale rooming house, with only a handful of tenants.  Among the residents in 1918 was Rev. Norman Thomas who had graduated from Princeton University and the Union Theological Seminary.  He had formerly been assistant pastor of the Brick Presbyterian Church and was now editor of the World Tomorrow.  Thomas described the monthly magazine saying it "seeks to examine political and economic events in the light of what we believe to be the spirit of Jesus."
Rev. Thomas was a member of the Socialist Party, a fact that may have contributed to his no longer being affiliated with any particular church.   On the evening of October 5, 1918 he hosted a meeting of the Women's International League in his rooms.  The speaker was Santeri Nuorteva, who identified himself as the "accredited but unrecognized minister to the United States of the Finnish Workers' Republic."  He defended the character of Bolshevik leaders Lenin and Trotsky to the assemblage.  The New-York Tribune noted, "A statement that he would align himself with the Soviet interests in case of an American war with the Bosheviki provoked applause from the fifty or more invited guests."
Rev. Thomas was paying $100 per month for his rooms, or about $1,700 today.  He would remain in the house at least through 1920.
Also living here was architect Warren Shepard Matthews.  A 1912 graduate of Princeton University, he had enlisted in the Army Tank Corps at the outbreak of World War I.  According to the Princeton Alumni Weekly later, "After discharge he decided to study architecture, entered the profession and designed many country homes, including the first two of the so-called modern type that were built east of the Alleghenies." 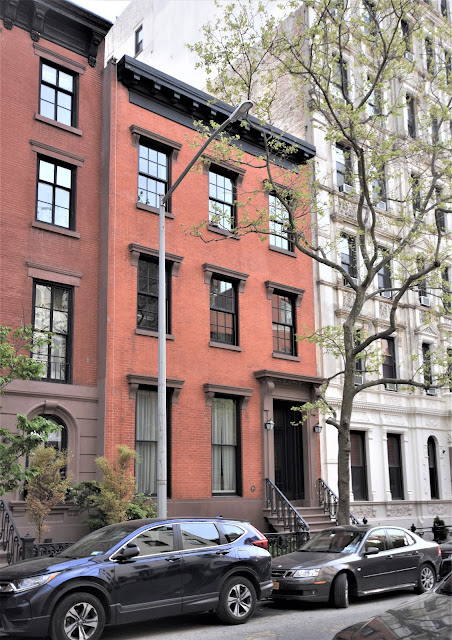 The house remained relatively unchanged until 1976 when a renovation resulted in two apartments in the basement level and one each on the upper floors.  In 2009 the basement and parlor floors were configured into a duplex apartment.
photographs by the author
LaptrinhX.com has no authorization to reuse the content of this blog
Posted by Tom Miller at 12:41 AM