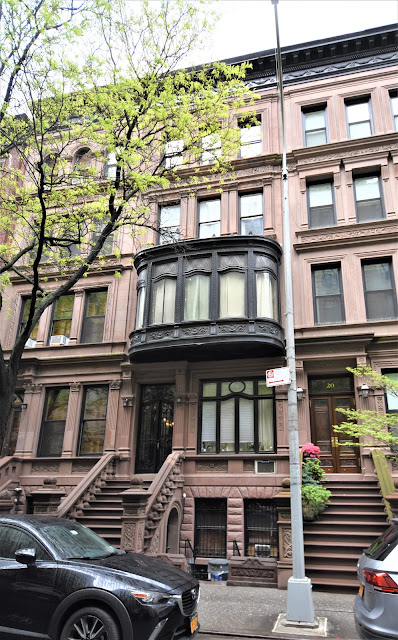 The row of four brownstone houses that Gilbert A. Schellenger designed for John Ruddell in 1889 was intended for well-heeled families.  Each would cost the equivalent of about $573,000 today to construct.  Four stories high above an English basement, the Renaissance Revival style residences had prominent cornices above the entrances, decorative carved courses below the third and fourth floors, and substantial stone stoop railings and newels.
In May 1890 Ruddell sold 18 West 71st Street to Albert J. and Rebecca Lyon Elias for $36,000, just over $1 million in today's money.
Born in New York City in 1853, Elias was by now a busy man.  He was the head of the brokerage firm Albert J. Elias & Co. and was highly involved in a number of street railroads.  He was president of the Dry Dock, East Broadway and Battery Railroad Company; the Forty-Second Street, Manhatanville and St. Nicholas Av. Railroad; the Third Avenue Railroad Company; and the Kingsbridge Railway Co.  He was, as well, a director in the Southern Boulevard Railway and a former School Commissioner.
Albert and Rebecca had three children.  When they moved into their new home Henry H. was seven-years old, Elizabeth Lyon was four, and baby Josephine was just one-year old.
On the night of March 17, 1895 a servant saw a man sneak out of the basement door.  The World reported, "She screamed and ran to the district telegraph call and summoned a messenger."  At around 10:45 a boy ran into the 68th Street police station and told Sergeant Ryan "that burglars were in the house of ex-School Commissioner Albert J. Elias."   As responding officers ran down West 71st Street toward the house, neighbors quickly threw on their coats and followed.  The World said, "A crowd of fifty people gathered in front of the house when they saw the police running."
As it turned out, it was a love-struck servant girl and her clandestine beaux who had caused the uproar.  A thorough search found no intruder and nothing missing.    "It is the opinion of the police that one of the domestics had been entertaining a male visitor," said The World.
Around the turn of the century the Eliases modernized their home with decided French touches.  Ornately grilled entrance doors were installed and a full-width copper-clad oriel was added to the second floor. 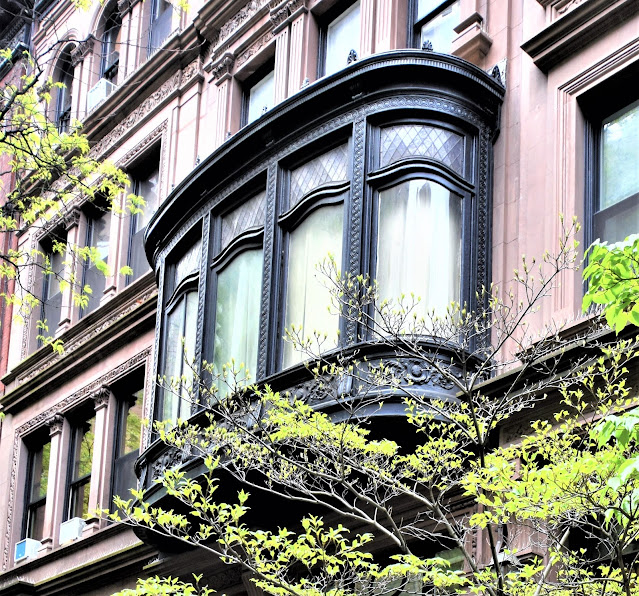 In 1898 Joseph Reinheimer was fired from his job as a street car conductor for "agitating his fellow workmen."  (He was most likely lobbying them to union.)  The New York Times reported that "he declared that Mr. Elias was the cause of the discharge."  In response, Reinheimer sent a threatening letter to Rebecca.  Police Captain Donohue concluded that the best way to calm things down was to find a job for Reinheimer.  The New York Times said, "that was done.  Nothing more was heard from Reinheimer."
But Reinheimer would be heard from again four years later.  The family went to the Atlantic Highlands in New Jersey for the summer season of 1904.  Albert's father, Jacob Elias, who lived nearby on West 69th Street, agreed to stop by the house now and then to check on things.
When Jacob went to the 71st Street house on the morning of July 21, he discovered a man lurking in the basement areaway--it was Reinheimer.  According to Elias, "Reinheimer pulled a revolver and said, 'It's a ----- good thing you're here and not your son.  I'd soon fix him with this.'"
Upon the family's return, two officers were detailed to watch the house.  On the evening of August 7 Detective Sergeant Downing arrested Reinheimer at his home.  Upon seeing the officer, Reinheimer muttered, "I know what you want me for."  The New York Times reported, "The detective said that Mr. Elias told him he had nothing to do with the discharge of Reinheimer." 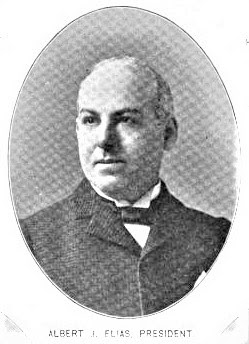 Street Railway Journal, 1892, (copyright expired)
The Elias family would live on in the 71st Street house for decades.  It appears they traveled to Europe for the summer of 1910.  Rebecca hoped to find a position for one of her servants in their absence.  Her advertisement read, "Lady wishes position for her first class chambermaid; will assist with waiting."  ("Waiting" was the term for serving in the dining room or at tea or receptions.)
In 1928 Dr. Moses Lobsenz, who owned 16 West 71st Street, purchased the Elias house.  In reporting the sale on May 25 The New York Times noted, "this was its first transfer of ownership in thirty-eight years."  It appeared that the end of the line for both houses was on the near horizon.  The newspaper reported, "A builder who plans to erect a nine-story apartment house is negotiating for the plot."
The deal never came to pass, however, and 18 West 71st Street became home, next, to the Fitch family.  They were followed by Gustav Neuzkirk who leased the residence from the 18 West Seventy-first Street Corp. in 1932 and '33.  In 1933 part of the house was used by the Miss Dorothy Studios, which offered "modern and stage dance" lessons.
It appears that 18 West 71st Street was being operated as a rooming house in the 1940's.  Among the residents in 1944 were Michael E. Scharf and his bride Ellen.   But trouble soon upset the newlyweds' happy home.  In order to marry Michael, Ellen had had to get a divorce from her former husband, Gosta Ljungdahl.  She did so in May 1943 and, according to the Suffolk County News, "as soon as she had obtained her liberty, married Michael M. Scharf."
But Gosta Ljungdahl did not disappear from their lives.  He protested the divorce on the grounds of fraud.  Two of Ellen's witnesses, Walter Christman and Richard Wilens, were arrested for perjury for falsely testifying that they had found Ljungdahl in a hotel with a woman in a negligee.  It was all too much for Michael Scharf who left Ellen in February 1944.  Ellen was back in court in May, facing charges of obtaining a divorce by fraud.
Pfc. Irving Fink lived here in 1945.  The soldier was an accomplished violinist, formerly with the Cleveland Symphony Orchestra.  He was now a member of the 39th Army Air Force Orchestra.  Following a performance on the night of February 17 he and 30 other orchestra members stopped in a cafeteria at 50th Street and Sixth Avenue.  Fink had his violin with him--but it was not just a violin.
The New York Sun explained, "The violin [is] said to be 250 years old."  Crafted by master violin maker Giavonni Paolo Maggini, it was valued at about $28,500 in today's money.
Suddenly Fink realized his violin was gone and the entire group of soldiers headed out of the cafeteria to catch the culprit.  The New York Sun reported, "Police said the soldier musicians caught up with [Samuel] Goldman on a subway platform, recovered the instrument, and meted out a swift going over to the Bostonian." 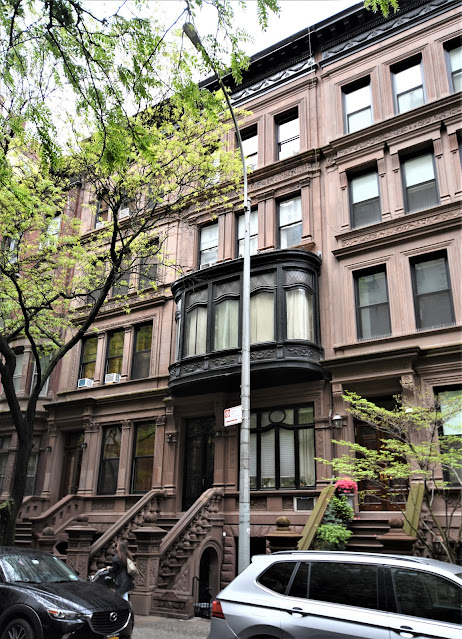 A renovation completed in 2010 resulted in a total of three apartments.
photographs by the author
LaptrinhX.com has no authorization to reuse the content of this blog
Posted by Tom Miller at 1:11 AM