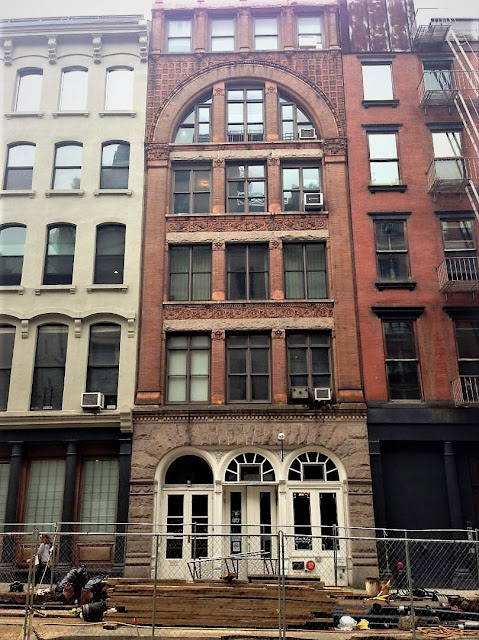 The title was put in Amalie's name; and the couple wasted no time.  Just three days later The Engineering and Building Record announced that architect G. A. Schellinger had filed plans for a "brick store" to replace the old three-story building on the site.  The projected cost was set at $1.1 million in today's dollars.

Completed within the year, Schellinger's six-story structure was a confusing, if delightful, mixture of styles and materials.  An elegant cast iron storefront of three arched openings graced the ground floor.  The rough-cut granite blocks at this level suggested Romanesque Revival; but the shallow capitals of the side piers included delicate neo-Classical swags. 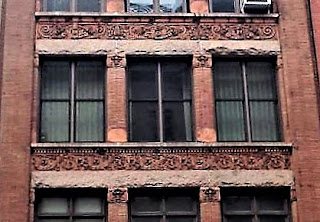 The Romanesque Revival motif was carried on through a four-story arch and hefty undressed granite lintels.  Then Schellinger added intricate terra cotta panels in the Renaissance Revival style above the second and third floors, and Corinthian terra cotta capitals to the long piers.  The ruddy red Roman brick gave way to a quilt of Queen Anne style tiles at the fifth floor, perfectly matching in color.  Five stone pilasters at the top floor upheld what must have been an impressive cornice.

The Coons sold No. 73 Warren Street to Ratcliffe Hicks on March 23, 1892.  Hicks, who lived in Connecticut, had already lived a fascinating life.  Born in 1843, he began practicing law in 1864.  When only 23-years old he was elected to the State Legislature and served several terms.  He was largely responsible for the abolishment of the death penalty in Connecticut.  He purchased the Warren Street building, in part, to house the New York office of the Canfield Rubber Company of which he was part owner with Jared H. Canfield.

A consummate marketer, Hicks devised an innovative exhibition at the 1893 Chicago World's Fair to promote the Canfield Seamless Dress Shield.  Victorian women's garments were unforgiving in hot, humid weather, causing perspiration in the most refined of wearers.  Underarm sweat was not only embarrassing, but damaged expensive fabrics.  The rubber Canfield Seamless Dress Shield promised to solve the problem.

The Canfield Rubber Company's exhibition included two full-sized wax figures--one of Jared Canfield, the other a working girl.  They were depicted seated at a table, with Canfield explaining how the dress shields were made.  In conjunction, Hicks kicked off a startling marketing campaign.

On August 6 The New York Times reported "A very interesting feature of the exhibit is that the Canfield Rubber Company, whose factory is at Bridgeport, Conn., while its principal offices are at 73 Warren Street, New-York, offers three free Cook excursion tourist tickets to Europe and return for the best three guesses by ladies as to the number of its shields sold in the world during the year 1893, the number sold in the United Stats during 1893, and the number sold in Europe during 1893."

The Canfield Rubber Company did not occupy the entire building,  In 1893 a floor was leased to the newly-formed printing firm of Redfield Brothers.  Founded by brothers Judd H. and Tyler L. Redfield, it would become one of the leading printing firms in the city.  The fledgling firm remained here only a year, moving to No. 25 Park Place, in the printing district, in 1894.

While Ratcliffe Hicks had his office in New York, he continued to make his mark in Connecticut.  In 1894, for example, he established the Ratcliffe Hicks prizes for students of the Agricultural College in Storrs.  The prizes were awarded annually to essay writers.  That same year, in May, he donated $5,000 to the city of Hartford for the erection of a monument to Frederick S. Brown.  He would go on to establish the Ratcliffe Hicks Industrial and Educational School at Tolland.

The well-traveled millionaire published Observations in 1900.  The book "deals in a fascinating manner with European Countries and Customs," according to a advertisement, and "has received the highest testimonials from the reading public."

In the meantime the store space was home to Dr. P. Harvey Flynn's veterinary supply store.  Unlike the rawhide bones and doggie sweaters carried by such retailers today, the products sold had more to do with the thousands of horses that populated Manhattan.  He, like his landlord had done, came up with a solution to a ubiquitous problem in 1899.

Runaway horses were dangerous, killing or injuring numerous people per year.  Flynn invented the My Little Giant Controller, a type of bit which he guaranteed to stop and control any skittish horse.  While he marketed the gadget as "completely humane," his description in The New York Times on March 25, 1899 said the horse "will not run; he cannot run; the pain caused by a steady pull is too intense to permit him to fight against it."

Flynn insisted "I know that I have been saved from accident, possibly from death, while driving spirited horses, by the use of this simple contrivance."  And he urged "It is an appliance that should be on every harness, used by a woman particularly."

Around the same time Thomas Leeming & Company moved into an upper floor.  Leeming had come to New York in 1883 and formed the commission house.  The firm remained in the Warren Street building until Leeming's death in 1902.

Of Ratcliffe Hicks' several homes was an estate near Pasadena, California.  He had built the house there in 1898; but decided to sell two years later.  His advertisement for the property in April 1900 noted "For fuller description of location and advantages of La Crescenta, send for circular.  Plans can be seen at office of owner, Ratcliffe Hicks, Hicks Building, 73 Warren St., N. Y."

Before Hicks died in 1906 he had sold the building to John H. Browning and Canfield Rubber Company had moved out.  In 1907 the marine supply firm of F. S. Banks & Co. operated from the building and submitted proposals to the United States Navy's Isthmus Canal Commission.  Among the items for which the firm hoped to land contracts were hoisting chains, 16,500 pounds of "black iron chains," "yawls or row boats," skiffs and oars.

The Motor Appliance Co. of America was in the building by 1911.  Like F. S. Banks & Co., it dealt in marine supplies, like boat motors, carburetors and the like.

Through the World War I years the building saw tenants come and go, including the Page Belting Company and the Neal & Scott Co., Inc. who took floors in 1913, and the Bissell Carpet Sweeper Company which moved in in 1916.

In 1920 the property was purchased by the Carbondale Sponge Company.  The firm dealt in sponges and chamois.  It leased the store that year to the National Twist Drill and Tool Company.  Other tenants sharing space with Carbondale in the 1920's were the Supreme Printing Company on the fourth floor and F. H. Hobbs on the second.

The president of Edwards Employment, Stanley Knapp, announced the building would "be extensively altered to fit it especially for the concern's own needs."   The company hired the well-known architectural team of Boak & Paris to do $35,000 in interior "modernization work," as described by The Times on June 15. (The comprehensive make-over would equal more than half a million dollars today.)  Sadly, the cornice had been lost sometime before the firm's purchase of the building, replaced by a gruesome parapet. 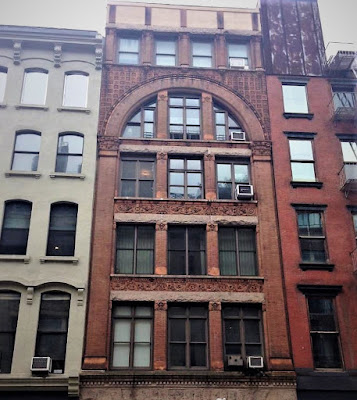 Now called the Edwards Building, the renovated structure was formally opened on June 13, 1942.  It was one of two locations for what The Times called "one of the largest industrial employment services in the country."  The Warren Street location catered to job hunters in the "mechanical, industrial, building and real estate fields."

The employment agency would remain in the building through the 1950's.  In 1966 the Newspaper Guild of New York went on strike.  Composed of unions of typographers, or "pressmen," the strike crippled several of Manhattan's newspapers.   On June 21 the Guild's strike bulletin announced "that The Journal-American and The World-Telegram strike headquarters had been consolidated at 73 Warren Street."

No. 73 Warren Street was one of the earliest of the Tribeca loft buildings to be converted to residential space.  In 1977 a vending machine business occupied the ground floor; while upstairs were one "living-work" quarters per floor for artists.  In 1985 the description was changed to one "loft dwelling" per floor, removing the restriction of artist use.

U. S. Telecom, a computer network design firm, was in the shop space at the turn of the century.  The attacks on the World Trade Center were devastating for the company.  According to its president in June 2002, the resulting drop in business, "and damage to equipment and furnishings stemming from the trade center's destruction, had resulted in nearly $500,000 in losses."

In 2012 Mulberry & Vine signed a lease on the ground floor space.  It was described by The New York Times' Florence Fabricant as offering "self-service cafe fare for breakfast, lunch and dinner," in 2013; and Alexis Lipsitz Flippin gushed about its "tasty, healthy prepared foods" in her 2014 book Food Lovers' Guide to Manhattan. 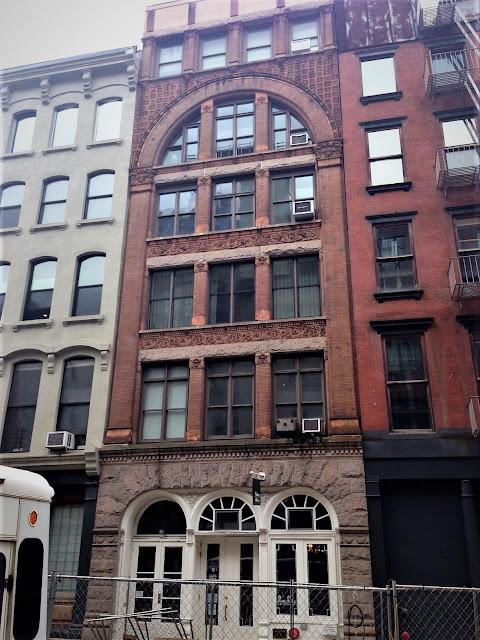 Mulberry & Vine remains in the space. while upstairs there is still one apartment per floor.  Schellinger's striking brick and terra cotta design is a show-stopper on the street.  Its lost cornice is as lamentable as the rest is joyous.