Clarence True was perhaps the most prolific of the Upper West Side architects in the late 19th century, credited greatly for molding the architectural personality of the district.  So successful was he that he formed his own development firm, the Riverside Building Co.  The arrangement not only increased his profits, but guaranteed complete creative freedom.

In 1898 he began construction on two rows of  upscale homes--on West 80th Street and around the corner along Riverside Drive.  As he most often did, True designed the residences in a pleasing blend of styles.  No. 74 Riverside Drive, for instance, was overall Elizabethan Revival, but wore an ornate Flemish Renaissance Revival gable, with corresponding stepped gables to the side.

The parlor level was accessed by a short stone stoop which led to a shallow portico which doubled as a balconette at the second floor.  The mellow red brick of the facade was sharply contrasted with white stone.

Unfortunately for Atwater, there were no buyers.  It would be over a year before the side-by-side houses were sold.  Finally, on April 8, 1903 the New-York Tribune reported on their sale.  The article went on to say that the 25-foot wide homes "are so designed that all the rooms have windows facing Riverside Drive.  There is a deep court between them which makes this possible."

The buyer of No. 74 was Francis F. Palmer whose engagement to Isabel Fowler would soon be announced.  Isabel was the daughter of railroad magnate Thomas Powell Fowler.  The couple's lifestyle would be greatly enhanced when Palmer was elected to membership in the Stock Exchange in November 1906.

Despite their noteworthy wealth and social position, the Palmers rarely appeared in the society columns.  They lived relatively quietly in the Riverside Drive home until July 1910 when it was sold to Dr. Louis Neumann, who paid $80,000 for the mansion--just over $2 million today.

Neumann's career spanned much more than medicine.  Born in 1869 he was an 1898 graduate of Bellevue Hospital Medical School and for years served on the faculty of Cornell University's medical college.  But his passion for boating outshone his love for medicine.

In 1904 he founded Motor Boat magazine, and in 1907 had partnered with his mother-in-law, Louise N. Prial, his brother-in-law, Louis Prial, and his brother William Neumann to form the Motor Boat Publishing Company.  Beginning in 1904 he was an active member of the Columbia Yacht Club, the New Rochelle Yacht Club and the New York Motor Boat Club.  His yacht Marie was a constant entrant in the boat races on Long Island Sound.

The broad-based doctor's interests did not stop there.  He was president and treasurer of the Heinebund Singing Society and a member of the New York Athletic Club.  He filled the Riverside Drive house with his well-known collection of Chinese ivories, bronzes, and antique Oriental rugs.

Louis was not alone in the new home.  Both his widowed mother, Margaretta, and his mother-in-law (also a widow), moved in.

It was Louise Prial who was most active among society.  On May 20, 1913, for instance, The New York Times reported that she gave "a musical entertainment" for the benefit of the Children's Fresh Air Fund in the house.  And the following February she hosted "a small dance last night at her residence, 74 Riverside Drive, for Miss Frances Vollmer.  There were about fifty guests."

By now the American Medical Directory listed Neumann as "not in practice."  He focused on publishing, adding the magazines Bicycle News, Tractor and Trailer, Ignition-Carburetion-Lubrication, and Cyclecar Age, to his publications.

Neumann sold No. 74 to the Seventy-seventh Street Construction Company in 1920.  It would mean the end of the line for the resplendent home as a single family residence.  On September 4 the Real Estate Record & Builders' Guide announced "The new owner will remodel the structure into small apartments."

The tenant list in the converted mansion was a strange mix.  Among the earliest residents was British actress Gladys Cooper who, by now, was seen both on stage and screen. She drew press attention in 1926 not for a theatrical performance, but for her shocking appearance at a police station.  Gladys had been at the Princetonian Club (a gambling spot previously raided by police) where she was injured in "an accident."  To prove her claims, she opened her fur coat to show the officers her bruises.  She wore nothing but her underwear under the coat.

Bronia Cherin shared an apartment in the building with her brother in 1928.  The 25-year old writer, who was born in Russia, went to the Municipal Building on May 16 that year with her fiancé, 61-year old butcher Leopold Samuel.  Just as the two paid the $2 fee for a marriage ceremony to be held in the Municipal Chapel a reporter approached them.  For some reason the couple panicked.

The New York Times reported "Immediately they cancelled the arrangements for the marriage and left the building.  They refused to say whether they would be married elsewhere."  The relentless reporter followed Samuel to his home, where he refused to comment.  And at No. 74 Riverside Drive he was told that Bronia and her brother had moved out.


The early 1930's continued to see a variety of tenants.  The offices of the new New York Opera Repertoire Company were established in an apartment in April 1932.  An announcement urged "American singers desiring an audition may call at the temporary offices at 74 Riverside Drive."

Living here at the time was Mrs. Kurt Gloeckner, the founder and president of the Five Arts Club, and Thornton W. Allen, composer and publisher of sheet music and head of the Thornton W. Allen Co.  Allen and his wife, the former Elsie Guy, would remain here until his death in Cape Cod in 1944.

While the tenants in the building seem to have been mostly upstanding and respectable, one apartment was used for a more nefarious purpose.  On October 24, 1942 an apartment was raided and Howard J. Cook was arrested on charges of bookmaking and operating a "poolroom."  The term had nothing to do with billiards, but referred to illegal horse race gambling.

The musical tradition set by Thornton W. Allen continued when the Top Record Co. moved into No. 74 in 1945.  By 1948 Spin Records, Inc. had its offices in the building and by 1953 Crease Music Corporation was here.  Although the building was converted to two apartments per floor in 1971, Top Music Publishers, Inc. still had its offices here in 1972. 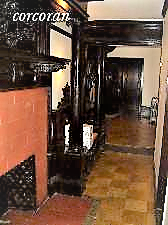 A subsequent renovation in 1977 resulted in two and three apartments per floor.   The alterations of the ground floor to accommodate a garage and the covering of the roof tiles with tar are, indeed, regrettable.