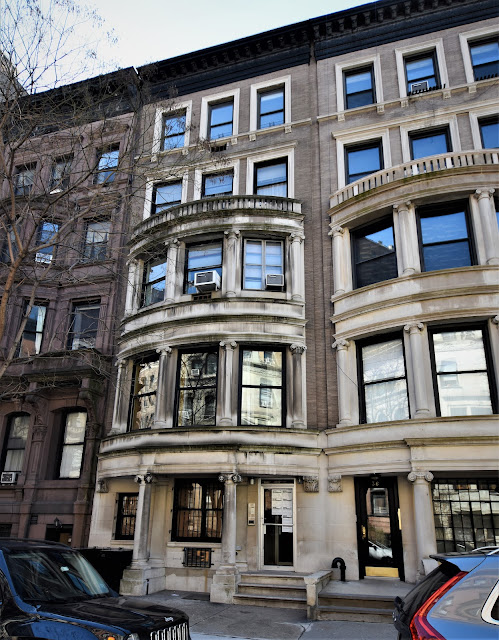 In the first years of the 1890's Gilbert A. Schellenger nearly single-handedly designed the entire southern block of West 69th Street between Central Park West and Columbus Avenue.  He would be responsible for 21 rowhouses and three flats on the block.  Surprisingly, they were not the projects of a single developer, but three unrelated operators.

The block filled with upscale Renaissance Revival style high-stooped homes faced in brownstone.  Two of the row of seven residences designed for George C. Edgar's Sons, however, refused to conform.  The 22-foot wide homes at Nos. 34 and 36 were faced in gray brick upon limestone bases.  Shallow, three-stepped porches led to the entrances nestled behind the fluted Ionic columns that upheld striking two-story bowed bays.  Unlike most of the homes along the block--with their abundance of decorative carving and quirky doglegged stoops--Nos. 34 and 36 exuded formal architectural quietude.

Construction on the row was begun in 1895 and completed early in 1896.  Even while finishing work was being done, No. 34 was sold on November 19, 1895 to Augustus B. and Esther A. Elfelt.  The purchase came none too soon for an important family event.

At noon on November 18, 1896 the house was the scene of Claire Elizabeth's marriage to Lee Kohn.  It was a major social event within the wealthy Jewish community.   The bridegroom was a cousin of the Straus brothers, owners of R. H. Macy & Co.  He was a partner in Macy & Abrast and in L. Straus & Sons.  Among the guests at the wedding were Isidore and Ida Straus, and Joseph and Caroline Seligman.

The joyous occasion quickly soured when a diamond tiara disappeared during the reception.   An immediate search was made, with no results.  Avoiding unwanted publicity, Elfelt hired private investigators.  Two months later he reluctantly brought in the police.

According to The New York Times on January 18, 1897, Elfelt "declines to say to whom it belonged, and the officials of the Detective Bureau are equally reticent."  Detective Sergeant McCauley did say that if the thief was a professional, there was little hope of retrieving the tiara.  It would by now have been broken apart and the individual diamonds sold.

But there was hope.  "He added that the detectives are working on the theory that the theft was not committed by professionals, but that the jewels dropped from the head of the wearer and presented an irresistible temptation to some one who say them."  Nonetheless, it does not appear that the tiara was ever recovered nor the thieve found.

Within the year Augustus B. Elfelt sold No. 34 to Charles Robinson Smith.  The sale may have been prompted by ill health.  Elfelt died in the family's country home at Irvington-on-Hudson the following year, on November 8, 1899, at the age of 68.

Smith was a prominent corporate lawyer, married to the former Jeannie Porter Steele.  The couple had two daughters, Hilda and Gertrude (another daughter, Elsa, died in childhood).  Months after moving in, Charles diversified by co-founding of the General Chemical Company in February 1899.

Jeannie's attentions were on entertainments in her new home.  In December 1898 Form, The Monthly Magazine of Society wrote "Miss Ethel Thornell, daughter of Mr. and Mrs. Henry Thornell...must also be included in the list of happy, handsome girls who will be launched on the not always smooth sea society between now and the New Year."  Jeannie helped calm that social sea by hosting an "Easter dance" for Ethel in the house on April 5, 1899.

While many other wealthy families summered in Newport and Tuxedo Park, or in country estates on Long Island, the Smiths most often spent their summers in France.  Their daughters' early years were divided between New York and Paris.

Following Gertrude's coming out during the winter season of 1900-01, society columns routinely announced when Jeannie, Hilda and Gertrude were "at home"--the complex procedure by which socialites arranged their afternoon schedules to avoid conflict.  On December 20, 1903, for instance, the New-York Tribune reported that the women "will be at home Tuesday, December 22, from 4 to 7."

Earlier that year the house had been the scene of a more somber gathering.  On April 30, 1903 the famous African explorer and author Paul Belloni Du Chaillu had died in St. Petersburg, Russia.   The explorer had no immediate family and American Consul General W. R. Holloway was unsure what do with his body.  A cable from Assistant Secretary of State Loomis in Washington DC directed "Have the remains embalmed, placed in a vault, and await instructions."

But before that happened, according to The New York Times on May 23, "Ambassador [Robert] McCormick received a cable message from New York from Charles Robinson Smith, as Du Chaillu's nearest friend, asking that the body be sent to his home, 34 West Sixty-ninth Street, for burial."

In June 1910 Smith enlarged the house when he hired architect Louis R. Metcalf to add a one-story extension to the rear.  The improvements cost $2,500, or about $66,500 today.

The family rubbed shoulders with Manhattan's highest echelon of society.  When, for instance, August Belmont married actress Eleanor Robson on February 26, 1910 in the bride's home, The New York Times explained, "It was necessary to restrict the attendance at the wedding to the immediate families of the couple, as the space afford by Miss Robson's home was inadequate for a large reception."  Among the select few others invited were Charles, Jeannie and Gertrude Smith.

As was the case in 1896, the 69th Street house was the scene of a wedding on April 16, 1914.  Hilda was married to Lyman Beecher Stowe, grandson of Harriet Beecher Stowe that afternoon.  The ceremony, like August Belmont's had been, was understated.  "None but the near relatives and a few intimate friends have been asked to the wedding, and a very small reception will follow," said The Times.

In the meantime, Gertrude busied herself with charitable and social causes.  As early as 1904 she was on the Standing Committee of City Hospital on Blackwell's Island; and in 1915 was Chairman of the Vacation Club at No. 38 West 39th Street, which changed its name to the American Fund for French Wounded a few months later.

Eleanor Robson Belmont had given up her career on the stage when she married.  She did, however, perform at least one more time on April 29, 1916.  For the Smiths' anniversary that year poet and author Josephine Daskam Bacon wrote a play, The Bouquet.  It was presented in the 69th Street house with Eleanor Robson Belmont and Francis Starr acting.

The Smiths tradition of summering in Europe came to and end with the outbreak of World War I.  Charles purchased an estate, Glendale, near Stockbridge, Massachusetts.  Like the daughters of many wealthy New Yorkers, Gertrude continued her war relief efforts.  She worked closely with Edith Wharton to amass medical supplies for the troops in France.  She went so far as to sail to Europe in a blacked-out ship and flew over the front lines to deliver the supplies.   Following the war she received the Legion of Honor from the Government of France.

The family received a scare in October 1918 when Charles appeared to be near death.  The New-York Tribune received a cable from Lenox, Massachusetts on October 18 that said he "is seriously ill with pneumonia at his summer home, The Dugway, at Glendale.  His daughter, Miss Gertrude Robinson Smith, received word of her father's condition at their city home, 34 West Sixty-ninth Street, yesterday afternoon and immediately came to his bedside."

The crisis passed and on May 9, 1920 The Times reported "Charles Robinson Smith has opened his place at Stockbridge, Mass., for the season."  At the time, Gertrude, who was now 39 years old, had become active in promoting the arts there.  In 1919 she constructed her own residence on the family's estate.  She was eventually a founder of the Berkshire Symphonic Festival, which later became known as Tanglewood.

The Smith family left 69th Street in the mid-1920's.   Although the mansion was not officially converted to apartments, rooms were being rented by 1923 when Maria Lessing and her daughter, Marion, moved in.

Born Maria Wilhelmina Dilg, she had married Otto Eduard Lessing in Bavaria in 1898.  Lessing, who studied at the University of Tubingen later earned degrees from the University of Michigan.  He was Professor of German at Smith College from 1913 to 1922, when he was appointed Professor of German at Williams College.  But when she discovered he was having an affair, Maria took their daughter to New York City and the former Smith house.

If she thought the drastic move would bring her husband back, it did the opposite.  He moved in with his girlfriend.  By August 1928 Maria had had enough.  She sued her husband for divorce "on the ground of misconduct with a woman not known to his wife, with whom he is alleged to have 'lived openly.'"

Surprisingly, Lessing asserted that he had obtained an absolute divorce in Mexico in January that year "on grounds of desertion and incompatibility."  Not only that, he had remarried on March 1 in Newark, New Jersey after obtaining the advice of lawyers who said everything was perfectly legal.

A reporter knocked on the door of No. 34 West 69th Street and talked to Marion.  On August 14, 1928 The New York Times reported that she said "her father had admitted to her that he had unsuccessful tried to get a divorce from her mother in Paris," and had heard he had obtained a decree in Mexico, but that no papers were ever served on her mother.

A colorful tenant in the 1930's was Nikita Balieff and his wife, the former Helena Konisarjevska.  The New York Times called him "the rotund Russian impresario whose failure to master the English language made him one of the most popular masters of ceremonies."   The vaudevillian, writer, and director was well-known throughout the country.

He had been forced to leave Russian during the Revolution, became popular in Paris, then came to American in 1922.  He died while living here on September 3, 1936.  Despite his tremendous successes--he was introduced to President Calvin Coolidge at one point--The Times noted "But true to the traditions of the theatre, he died with almost all his fortune gone."

Another theatrical tenant was singer and actress Florence Forsberg.  She was 25 years old in 1953 when she was among the cast of Wonderful Town as a singer and the understudy to Edie Adams.   Florence had been good friends with Korean War veteran, Lester Johnsen for about five years at the time.

After the show on the night of July 16 the two were having drinks in Florence's apartment.  The following morning her body was found with 14 stab wounds.  Almost simultaneously Johnsen shot himself with a hunting rifle in the apartment he shared with his mother and sister on West 108th Street.  He left two notes, one of which read:  "I am sorry for what I did.  We were in a passion.  We were both drunk.  I killed her.  I am sorry.  Life is not worth living."   He had left No. 34 West 69th Street around 4 a.m. and killed himself at about 7:15.  He gave no motive for the murder.

In 1963 the former mansion with its colorful history was converted to apartments.  Despite the unsympathetic replacement windows, a door more appropriate to a 7-Eleven convenience store, and an dingy coat of grime, the house continues to exude an august presence.