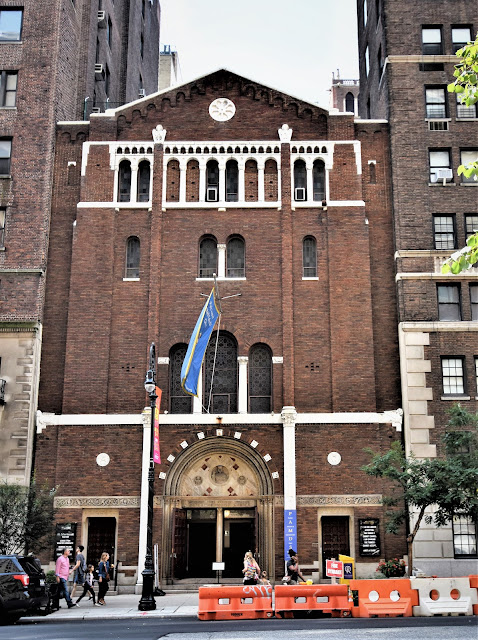 In 1768 property, 42 feet wide by 60 feet deep,was acquired on John Street, near Nassau by the first Methodist congregation in America.  The John Street Church, popularly known as Wesley's Chapel, was opened in October that year.  From that humble start, Methodism spread.

In the spring of 1837 a new congregation was formed well north of the city in the village of Yorkville.  In a coincidence of timing, the venerable John Street Church was being demolished at the time.   On February 1, 1837 that year The Herald had reported "The property on which the Methodist Church in John street stood is said to be forfeited by the late sale and conversion of it into stores."

Under the leadership of Rev. Daniel De Vinne the Methodist Episcopal Church in Yorkville purchased four plots on what would become East 86th Street, and according to The New York Times decades later (on November 12, 1882), the old structure "was purchased by the Eighty-sixth-Street congregation and removed to the site of their present house in 1837."

The Yorkville congregation outgrew the building within two decades.  "In this venerable old edifice worship was conducted until 1858, when it was torn down and a new brick church was erected in its place at a cost of $9,800," reported The Times.  But it was not entirely the end of the historic structure.  The article went on to say "At the erection of the second church building a single beam of the old John-street wood was placed under the kneeling-board in front of the altar."

By 1882 Yorkville was no longer a distant hamlet; but a part of the steadily growing city.  The congregation had once again outgrown its building.  In August ground was broken for a new church directly across 86th Street and on November 12 The New York Times reported that the laying of the cornerstone would take place the following day.  The article noted that the wood from the John Street Church "will be removed and placed in a similar position in the new...church so that the church will retain its claim to material, as well as spiritual descent from the first of American Methodist churches."

With the new building came a new name.  On April 2, 1883 The New York Times announced "This organization will soon be known as the Park-Avenue Church, as it is now building a fine house of worship at Park-avenue and Eighty-sixth-street."

That impressive structure was designed by well-known architect J. Cleveland Cady.  The eccentric design in included a 150-foot tall corner tower, "built after the style of the Campanile in Florence" and gargoyles on the Park Avenue elevation "which have the face of a tiger, the wings of a bat and the claws of an eagle."  The cost, including the land, would equal $5.68 million today.

At the time the Park-Avenue Methodist Episcopal Church had a membership of more than 700, described by The New York Times as "fashionable."  Nevertheless, it would be another 21 years before the $40,000 mortgage would be paid off.  On March 18, 1905 the New-York Tribune reported that the debt was finally paid off.  The celebratory service, predicted the newspaper "will be a memorable one in the long history of the Old Eighty-sixth Street Church, as it has always been known."

Debt would come again in the 1920's.  A new concept was sweeping metropolitan areas--the "skyscraper church."   Congregations from coast to coast were demolishing their old structures and building apartment or office buildings which incorporated a ground floor church space.  In theory the congregation would reap tremendous income from the rental properties.  Not everyone was thrilled by the concept.  The New York Times, for instance, editorialized, "Must we visualize a New York in which no spire points heavenward?"

By now the Park Avenue corner sat within a much-changed neighborhood.  Old houses and shops had been pulled down to be replaced by jazz-age apartment buildings.  The property on which the church stood was ripe for similar development.

On July 6, 1924 The New York Times wrote "The decision of the Park Avenue Methodist Church to tear down its present edifice for the erection on the site of a fifteen-story apartment house, the lower four floors of which will be utilized for the continuance of the church activities, there is presented not only another striking illustration of the changing conditions for successful church management in certain parts of the city, but also additional evidence of the increasing popularity of East Eighty-sixth Street as an apartment residential thoroughfare."

As the trustees worked with architect Henry C. Pelton, the concept changed.  A year later, on July 27, 1925, they announced that the 15-story apartment building plan would go ahead; but without the church.  A separate, three-story structure would be erected for that purpose directly behind, on 86th Street.

The trustees estimated the rental income from the apartments at "not less than $10,000 a year," according to The Times.  "The church believes that this sum will almost pay the running expenses of the congregation."  Cady's brownstone structure was razed in July 1925 and construction was immediately begun on the new buildings.

The cornerstone of the church was laid on March 23, 1926.  The Times noted that it "will be in the Byzantine style.  It will contain an auditorium, to seat 537 people, on the street level, with Sunday School, social rooms and a pastor's study on the two upper floors."  "Byzantine" was a  broad description, and Henry C. Pelton's design drew heavily from the Southern Sicilian Romanesque style.

The $250,000 structure was dedicated by Bishop Luther B. Wilson on January 8, 1927.  A separate dedication service was held later that evening for the new Skinner organ.

For decades the annual New York Methodist Conference had taken place in the Park-Avenue Methodist Church, and they continued within the new building.  At the time of its dedication Prohibition was a flashpoint of controversy as hundreds of thousands of citizens sought its repeal.  The Methodist Church was firmly in favor of Prohibition, as evidenced in the Conference meetings here on April 3, 1927.

Dr. Clarence True Wilson, general secretary of the Board of Temperance, Prohibition and Public Morals of the Methodist Church asserted "The liquor traffic is in the course of ultimate extinction."  He insisted that the newspaper accounts were fake news.  "There are those who would have you believe there is a great uprising against prohibition, but this is not so." 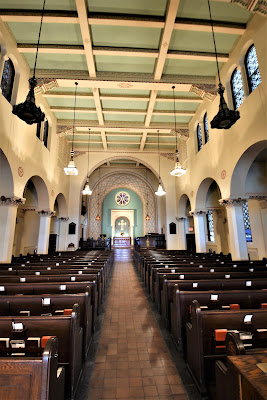 Four years later his stance was embraced by the Rev. Dr. James Josiah Henry, new pastor of the Park Avenue Methodist Church.  In his sermon on October 25, 1931 he claimed that the New York newspapers were not giving a "true picture" of Prohibition; saying in part "It is this unfairness that has led so many people to state that the eighteenth amendment and the Volstead act cannot be enforced.  This is utterly false."

In the meantime, the sometimes bland meetings of the New York Methodist Conference were enlivened by an arrest in April 1930.  Two years earlier Rev. L. B. Haines conducted the wedding ceremony of John Willis and Ella Acker.   Rev. Haines later learned that the 74-year old bridegroom was already married.  Six weeks after the sham marriage Willis deserted Ella and returned to his first wife, who was none the wiser.

John Willis was described by The New York Times as being "fond of religious services."  And so he attended a session of the Conference in the Park Avenue Methodist Church.  The last person he expected to be there was the Rev. L. B. Haines.   Haines slipped out of the church and found a policeman.

On April 8 The New York Times reported "With his two wives in court sympathizing with each other and united in indignation against him, John Willis, 76 years old, pleaded guilty to bigamy yesterday."

From the pulpit Rev. John J. Henry did not hold back in his often spirited social and political opinions.  Ardently anti-union, he announced in his July 22, 1934 sermon that "Reds and radicals" were responsible for the recent strikes on the West Coast.  He told the story of a manufacturer who, when he found his plant was being picketed, invited the employees to go fishing with him.  The next morning everything was fine within the factory.

"But you cannot treat radicals and Reds that way...They are simply suffering from industrial insanity and they are seeking to destroy our industrial system."  He then turned to commercial isolation, the Depression Era version of America First.  "We could not possibly supply the rubber needed by our great automotive industry.  So it is well to remember when we grow too cocky that we could not get along without Brazil.  If we close the door to Cuban sugar in order to aid our own sugar interests, we only punish ourselves.  If a man makes a corner in wheat on the Chicago market, peasants on the slopes of the Alps may starve." 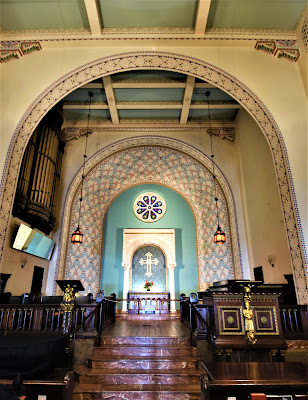 He broadened that stance in September 13, 1936 by including the welcoming of all peoples.  The Times wrote "Nationalism and high racial feeling he described as evils which tend to destroy representative government."

In his sermon he said in part "I hope there will come a time in the future when you can love the man who lives in the Ukraine, Germany, Holland and other countries just as well as you love your own race and nation.  I say this because I believe there is an Almighty God.  Unfortunately, the world is not yet in that condition of mind.  Too many still believe that 'blood is thicker than water.'"

Seven months after that sermon the Park Avenue Methodist Church was in trouble.  The income from the apartment building, which the trustees had assumed would carry expenses, fell short.  On April 26, 1937 The Times ran the headline "Park Ave. Methodist Faces Loss of Home."  The original 10-year $800,000 mortgage on both properties--a considerable $13.7 million today--was now due.  The article explained that Rev. Henry had asked members to "confer Friday evening on steps to prevent the threatened loss of the church of its place of worship."

As the financial crisis dragged on Rev. Henry returned his focus on social and political issues.  Naturally, war, Nazism and Facism would soon be on the top of his list.  Nearly three months before America was pulled into the conflict with the attack on Pearl Harbor he railed against Hitler and warned of repeating the mistakes of World War I.

In his September 14, 1941 sermon he cautioned against the "mistake of the 1918 Armistice."  He said that just as the Allied armies were ready to enter Germany "and crush a power that was menacing the world," the Armistice stopped them.  Now, he stressed, "as defenders of religion it is our duty to destroy sin and hate--everything that Hitler represents."

Rev. Henry stepped down because of poor health around 1945, ending a colorful chapter in the history of the Park Avenue Methodist Church.  His retirement came at a time when the church's financial condition had once again become a crisis.  The Methodist Church ordered the congregation to close in 1946; but appeals by members to the United Methodist Society resulted in financial support and a 10-year reprieve.  In 1956 the apartment building was sold. 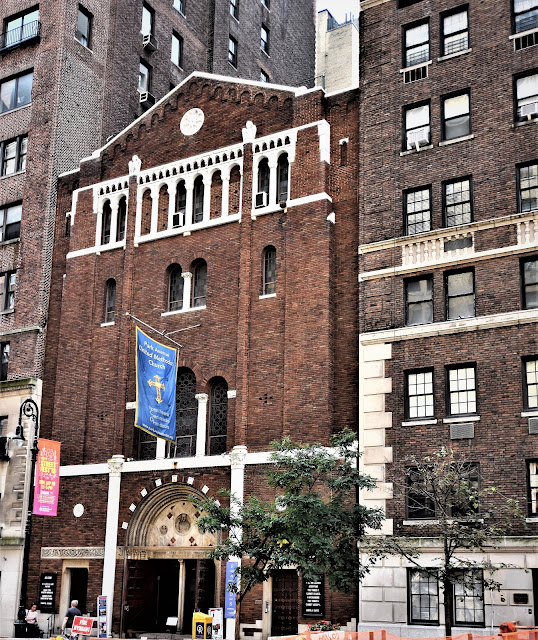 Financially secure today, the church continues to serve the the neighborhood--one drastically different from the rural hamlet where it was founded nearly 190 years ago.