In 1845 attorney Augustus W. Clason, Jr. began construction on an upscale brick-faced house at No. 58 West 10th Street (until 1870's 10th Street addresses began at Sixth Avenue.  The house would then be renumbered No. 12.).   The residence, completed the following year, outdid most of its imposing neighbors through its exceptional 32-foot width. 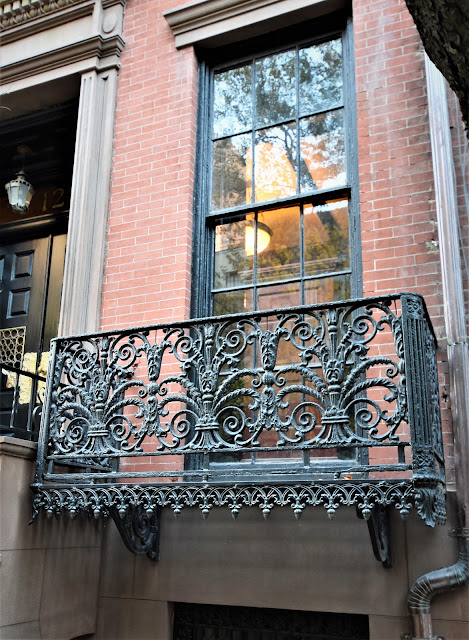 Clason erected the house as an investment.  It was purchased by banker and importer Clinton Gilbert and his wife, the former Mary Stokes.  Born in 1816 near Washington Square, Gilbert was the son of silversmith George W. Gilbert (reputedly the first silversmith in New York City).   He and Mary, who were married on June 1, 1831, had no children.   They maintained a summer house in New Rochelle, New York.

Mary's widowed mother, Mrs. Thomas Stokes, lived with the couple.  Her grandson, Anson Phelps Stokes, described her in his 1910 Stokes Records as "a woman with delicate hands, fine complexion, large eyes, calm and gentle manners, and pleasant English voice."  She died in the house in 1849.

Clinton Gilbert started his career in the metal importing business, forming Stokes & Gilbert with brothers Benaiah and Henry Stokes, two of his wife's brothers.  By now his many titles included president of the Greenwich Savings Bank, a trustee of the Corporation of Greenwood Cemetery, and a partner in The Broadway Railroad.

It was most likely Gilbert's busy schedule that prompted him to skip grand jury duty on January 15, 1862.  The judge was not pleased.  The New York Times reported "The Grand Jury reported to the Court that they were unable to attend to business owing to the absence, without excuse, of several of their members."  Gilbert was fined $25--about $630 today.

Mary Stokes Gilbert suffered "paralysis of the throat" in her latter years, making her unable to speak.  Anson Phelps Stokes recalled that "On account of his wife's health, he afterward moved to a quieter part of Fifth Avenue."  She died on Tuesday, April 4, 1865.

Gilbert did not give up ownership of No. 12, and, in fact, by now owned No. 14 and No 20 West 10th Street.  An advertisement in The New York Herald in 1875 offered "To Let--Extra wide house, handsomely furnished, No. 12 West Tenth street; rent reasonable to good tenant."

Gilbert would die in No. 20 West 10th Street on November 29, 1891 at the age of 84.  The Rhodes' Journal of Banking noted "The greater part of his life was spent within a stone's throw of the house where he was born, and he died at his home in 10th street not far from the same place."

Before his death No. 12 had become home to Frederick Esler, head of the streetcar firm Metropolic Contract Company, and his wife.  The couple moved among polite society, rubbing shoulders with other wealthy visitors at fashionable resorts.  On October 14, 1887, for instance, The Evening World reported "Mr. and Mrs. Frederick Esler, who have been spending the summer at Seabright and Bar Harbor, have returned to their home at No. 12 West Tenth street."  A month later the newspaper noted "Miss Elanor Winslow will be entertained at luncheon on Thursday by Mrs. Frederick Esler, of 12 West Tenth street."

Around 1892 Dr. Walter Vought, a bachelor, purchased the house.  He would not enjoy it for long.  Vought selflessly treated patients suffering the worst of contagious diseases.  That year he was in charge of the Quarantine Station at Fire Island during a cholera epidemic.  On September 25, 1893 The New York Times reported that he "died at 11 o'clock yesterday morning in the New-York Hospital of typhoid fever, which disease he contracted while attending a little child about ten days ago."

In May 1894 the doctor's estate sold the property to Robert J. Fox for $31,000--about $911,000 today.  The sale triggered a rapid-fire turnover of ownership, ending with esteemed architect Bruce Price.  Before the family moved in Price made some substantial changes.

A full floor with a simple paneled cornice was added, the parlor windows were removed and replaced by a sizable copper-clad rounded bay, and the Greek Revival style entrance was changed to neo-Classical.


He and his wife, the former Josephine Lee, had two children, including Emily, recently married to Edwin Main Post.  She would become a successful author of articles on architecture and interior design, five novels and serials in popular magazines like Harper's Weekly.   Her greatest fame came through her books on etiquette.

Bruce Price was among the preeminent architects of his day.  Among his works were the cathedral in Savannah, Georgia, the Lee Memorial Church in Lexington, Virginia, and the cottages and clubhouse at Tuxedo Park (where the Prices had their summer home).  So when rumors circulated that the largest hotel in the world--backed by "Vanderbilt interests"--would cover the entire block between Park and Madison Avenues and 41st to 42nd Streets, reporters went to No. 12 West 10th Street to verify the story.

On the night of December 15, 1897 he opened his door to a New-York Tribune journalist.  The reporter wrote "Mr. Price stated explicitly that so far as he knew there was no such project in contemplation."  However, he would not turn down the job.  "'I should be only too happy,' he said, 'to be commissioned to draw up plans for a monster hotel.'"

Price's niece, Sadie Price Pell, divorced her wealthy insurance broker husband, Archie H. Pell, in Saratoga in the summer of 1902.  The daughter of Price's brother, Benjamin, she soon announced her intentions to marry Dr. Percy R. Turnure.  Following their marriage in the Church of the Ascension on Fifth Avenue, a reception was held in the 10th Street house.

Lamond was a renowned organist.  Not only was he organist of fashionable Trinity Chapel, he was the director of the Trinity School of Church Music, a training school for organists, choirmasters and choristers.  Additionally, he was one of the organizers of the New York Oratorio Society.

The Lamonds' daughter, Marjorie, was educated both in New York and in Europe,  She had been introduced to society in 1912 and was traveling with her parents in Europe on August 1, 1914 when her engagement to Henry Fairfield Osborn, Jr. was announced.

The family did not return to New York for the wedding; instead the groom and his family (described by The Sun as "one of the most prominent families in the city") went to London.  The original plans were for a Paris wedding, but, as explained by The New York Times on September 9, 1914 "when the war began it was decided to wait until the party reached London."  The destination wedding, held in Westminster Abbey, was attended by prominent New Yorkers like Mr. and Mrs. J. P. Morgan.

Shortly after Marjorie's wedding No. 12 West 10th Street became to Henry Wood Flournoy.  His wife's niece, Alice Gertrude Gordon (who often went by her middle name), lived in Washington; but the couple kept a room available for her visits to New York.  The arrangement would draw the house into the history books.

When Gertrude's father, General J. J. Gordon died, he left her what The Evening World termed "a large fortune."  Gertrude's best friend was the widowed Edith Bolling Galt.  The two were virtually inseparable, seen at entertainments and the theater together both in New York and Washington.  Gertrude's prominence in Washington society was evidenced on May 6, 1914 when The New York Times reported "President Wilson, who frequently seeks relaxation after an arduous day at one of the local theatres, varied his custom to-night by attending the circus, accompanied by Miss Margaret Wilson, Miss Helen Woodrow Bones, Miss Gertrude Gordon, and Dr. Cary T. Grayson."

In the fall of 1915 both Gertrude and Edith Galt were staying in the Flournoy house.  On November 28 a prestigious caller arrived.  The New-York Tribune reported "Woodrow Wilson set down his Presidential burden last night on the door-mat of an unpretentious red brick house in West Tenth Street, Just off the avenue.

"The door opened to his ring and closed behind him--and then for more than two hours, while secret service men, detectives, reporters and plain hoi polloi awaited the reappearance of the President, Woodrow Wilson, the human being, the accepted suitor, enjoyed the companionship of the woman who is to become his wife."  Reportedly, it was in the Flournoy home that the President had recently proposed marriage to Mrs. Galt.

No. 12 became the focus of press attention.  On November 30 The Times reported "Yesterday was a busy day for Mrs. Norman Galt, the fiancee of President Wilson.  From early morning until sundown she kept appointments with her dressmakers, furriers, and milliners...Mrs. Galt left the home of her friend, Miss Gertrude Gordon, at 12 West Tenth Street, about 9 o'clock."

Despite nasty rumors that the President and his fiancée had murdered his wife, Ellen, the couple was married on December 18, 1915.  But the presidential couple would return to No. 12 West 10th Street at least one more time. 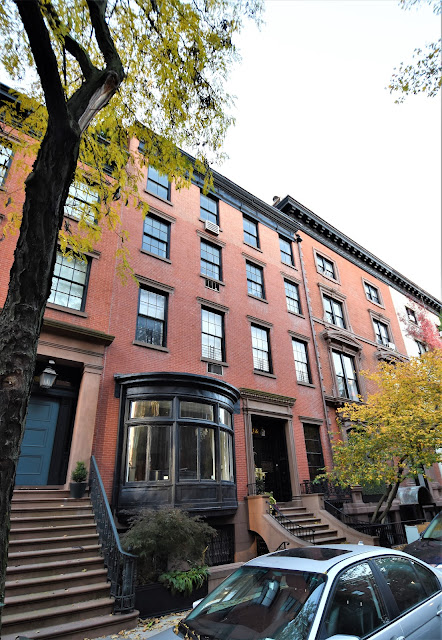 The following year, on May 24, Gertrude married White House physician, Dr. Cary T. Grayson in St. George's Chapel.  The First Lady stood by the bride's side and held her bouquet.  Witnessing the ceremony with the President, were Secretary of the Treasury, William Gibbs McAdoo, and his wife.  Outside around 300 people gathered in the park to get a glimpse of the distinguished persons entering and leaving the church.  Three years later The Sun mentioned "It was very much of a White House wedding, even though the ceremony was performed in New York."

Afterwards a reception was held at No. 12 West 10th Street.  The wedding cake was a gift of the Wilsons, who attended the "informal reception."  The Times noted "Gifts were received by Dr. Grayson and his bride from the President and Mrs. Wilson, members of the Cabinet, Senators, Representatives, many Government officials and employees at the White House."

Following the Flournoy's leaving, around 1919, the house was converted to two residences, the homes of Mr. and Mrs. Herbert S. Houston and Mrs. and Mrs. William Ransom Barbour.  The Houstons remained at least through 1930; by which time Harris Baldwin Fisher and his family had moved into the former Barbour apartment.

In 1928 the lower level was converted to the Poetry House.  On June 8 that year The New York Times remarked "Pegasus went in dinner jacket and gleaming white shirt to the formal opening last evening of Poetry House, a meeting place for poets and all lovers of literature, at 12 East Tenth Street."

A renovation in 1958 resulted in two apartments in the basement, where Poetry House had once been, one on the first floor, and two each on the upper floors.  Among its more celebrated residents was Isabel Lydia Whitney, the renowned water colorist and muralist.  Upon her death in her apartment on February 1962 The Times called her "the first woman in America to stand on a scaffold or ladder and do fresco painting."  Among her works was the fresco for the 1925 wing of the Brooklyn Museum.

No. 12 West 10th Street never truly declined.  When cosmetics creative directors Richard Ferretti and James Gager sold their 2,200-square-foot apartment in December 2015, it commanded a price of $5.75 million.
And while most of the interior details have been removed over the decades, some, like the entrance staircase, survive.  Outside the 1890's remodeling by Bruce Price remains little changed.