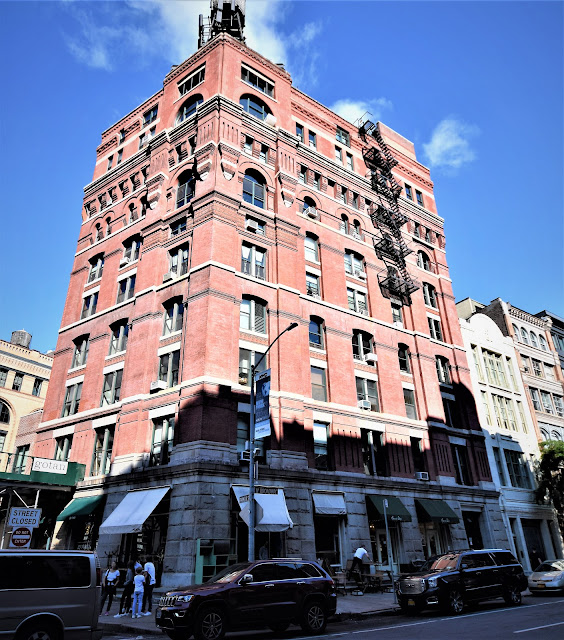 On January 22, 1881 The Real Estate Record & Builders' Guide reported that "Messrs. Francis H. Leggett & Co., wholesale grocers, have recently bought 89 feet by 80 on Franklin and Varick streets and West Broadway, for $100,000."  The cost of the property would equal more than $7.4 million today.  The article added "On this site they propose to have finished, by next summer, a magnificent building suitable for the requirements of their business."

On March 19 the journal reported "Mr. George W. Da Cunha, the architect, will break ground this week for a nine-story grocery for Messrs. Francis H. Leggett & Co.  The entire first story is to be of granite...Thence to the eight[h] story the fronts are to be faced with Philadelphia brick."  The sills, band courses, lintels and cornices would to be granite.  According to DaCunha's plans, the top floor would take the form of a mansard, faced in "rich dark red slate."

Completed in 1882, the building was a harmonious blend of Queen Anne and neo-Grec styles.  The understated lower floors relied on creative brickwork and angles to create interest,  The upper floors, however, exploded in a fantasy of arched openings, chunky brick corbels, and muscular pier decorations.  What was originally intended to be a mansard above the granite cornice emerged as a vertical story by a solid brick parapet.


The New-York Tribune later said "no mercantile house is more widely known, or more highly esteemed."  Included in the new building was a laboratory where three chemists insured, according to an advertisement, "the absolute integrity of every food material entering their products."

It would appear that Francis Leggett was a compassionate employer.  One of his salesmen, 69-year-old David M. Earl, fell ill with "bilious colic" on April 22, 1893 and went to the Chambers Street Hospital.   What ensued was what The New York Times described as "an unpleasant experience."

A "young man, who said he was not the doctor," administered medicine which made Earl ill, causing him to regurgitate.  In response, the hospital worker "abused him for such behavior."  Earl complained that "he was rudely hustled about, and nearly fainted with pain from the treatment he received."  Finally, he left the hospital when a doctor diagnosed him as a having too small a liver.

But his $150 watch and cash, which he left with the watchman when he checked himself in, were now missing.  When he heard of his salesman's plight, according to The Times, "Mr. Leggett was indignant at Mr. Earl's experience at the hospital and entered a complaint before the Visiting Committee of the New-York Hospital."  Nevertheless, Earl's money and watch were never recovered.

A few months after the incident Arthur G. Wainwright was hired as assistant cashier (a bookkeeper in today's jargon).   As the years passed he was deemed "strictly trustworthy" by the firm's management.  That is, until March 8, 1885 when his accounts were found $400 short.

When a supervisor asked him about the discrepancy, Wainwright opened the safe and showed him that the missing amount was there.  In fact, it wasn't.  On March 14 The New York Times reported "He was frightened then, and when a good chance came he took $2,000 from the cash drawer, borrowed another clerk's hat, and disappeared."  The cash would amount to $61,000 today.

The Times wrote "Nothing has since been heard of him, but he is supposed to have gone to Canada."  In fact, he went to Brooklyn.   Then, two weeks later The Sun reported "He returned yesterday just before closing time and gave himself up, saying that he had not spent the money and that his conscience would not allow him to keep it."  Wainwright's supervisor, Theodore F. Whitmarsh, summoned detectives who took the repentant embezzler to jail.

Wainwright's arrest was not the end of similar problems for the firm.  On November 18, 1901 The New York Times reported "Max Borchardt, forty-eight years old, was arrested at his home...[charged] with stealing $113.51 from the firm of Bradford [sic] H. Leggett & Co. of 128 Franklin Street, where he was employed."

Another highly regarded employee was arrested that year.  Bryan L. Rawson had worked for Leggett & Co. for a quarter of a century as a "credit man."  He was in line to be taken in as a partner, and The Evening World called him "their most trusted employee."  Rawson was earning the satisfying salary of $4,500 per year, or about $135,000 today.

But a check of his accounts showed he was short $35,000.  Rawson maintained his innocence, but resigned out of indignation.  Two years later an investigation revealed it was Max Borchardt--who had been convicted of stealing only $113.51--who had taken the money.  With his reputation severely bruise, Rawson now sued Francis Leggett & Co. and received an award of $35,000 on October 19, 1903.

Dishonest employees were, of course, the exception.  The others enjoyed perks like the company-sponsored baseball team.  On June 9, 1910 The Times reported that the Leggett team "will play on Saturday afternoons only, and will now entertain challengers from mercantile houses, preferably wholesale grocers."

Disaster for the impressive Francis H. Leggett & Co. building came not because of fire or explosion, but civic improvement.  In 1904 C. C. Hickok had begun a push to extend Seventh Avenue southward.  Finally, on June 21, 1913 The Record & Guide reported that the city would begin appropriating property "for the extension of the avenue from Greenwich avenue to Carmine street, for the widening of Varick street from Carmine to Franklin and for the extension of Varick street from Franklin to West Broadway."  Standing in the route of the Varick Street widening was more than half of the Leggett building.

With much of its structure now gone, Leggett & Co. hired the esteemed architect C. P. H. Gilbert to erect a western wall.  The firm need not have gone to the top of the architectural heap in selecting its designer; for the resultant patch was a simple, brick wall.

Losing half of its building meant that Francis H. Leggett & Co. could no longer function here.  Although it retained possession of the property, on March 14, 1914 the firm announced it would be moving.

In June 1921 the aging building was sold at "liquidation sale" to Emma G. Shuttleworth.  She had a one-story extension, designed by architect Charles H. Richter, added on Varick Street in 1923.

By 1931 the building was home to the All American Cable and Radio, Inc.  The Great Depression was dealing a significant blow to telegraph firms and on October 14 that year All American Cable joined other similar companies, like Western Union and the International Telephone and Telegraph Corporation in cutting its employees' wages.

The company was responsible for the sub-ocean cable service between the United States and the French island of Martinique.  Significant troubles were caused on July 21, 1940 when the cable ruptured, disrupting communications.  With no cable ships in the North Atlantic, it took the firm five months to correct the problem.

Before long a similar firm moved in, the Mackay Radio and Telegraph Company.  It was a foreshadowing of things to come.  In August 1945 the firm elected Forest L. Henderson its executive vice president.  The fact that he was already executive vice president and director of All American Cable and Radio, Inc. was, no doubt, not a coincidence.  Within five years the two firms were firmly affiliated. 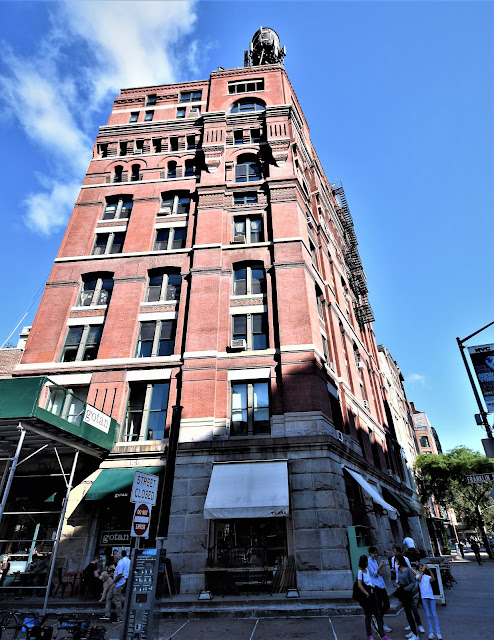 The distinctive change in the Tribeca neighborhood made its appearance at the old Leggett Building in 1988 when the upper floors were converted to 22 residences.  The ground floor retail spaces would be home to stores and galleries--like the D. L. Cerney gallery on the West Broadway side in 2001--over the years.  Most of the busy locals who grab coffee or a sandwich at Gotan restaurant today have no idea that the handsome building is just a fraction of what it was in 1882

photographs by the author
Posted by Tom Miller at 2:34 AM