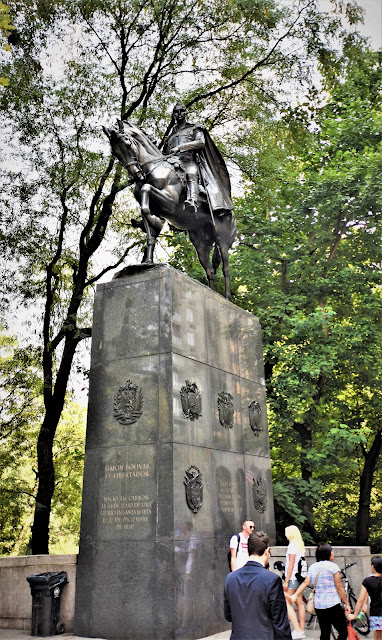 On April 17, 1921 the New-York Tribune noted that "Bolivar Hill," a knoll in Central Park near 83rd Street and the West Drive "has been for thirty years the center of a drama which had the elements of human interest, passion, gossip of the art world, comedy, tragedy and wasted fortune, to say nothing of international relations."  It all had to do with the Venezuelan Government's frustrated attempts to have a fitting memorial to Simon Bolivar in the park.

In 1883 it had commissioned Venezuelan sculptor Rafael de la Cova to create a monument to the hero.  Bolivar is credited with gaining independence from Spain for not only Venezuela, but Colombia, Ecuador, Bolivia, Peru and Panama.    The completed statue, a gift to New York City, was dedicated on June 17, 1884.  On one side of the pedestal was the single word "Bolivar" and on the opposite "Venezuela to the City of New-York, 1883."

At the time The New York Times reported "Upward of 2,000 people witnessed the unveiling of the statue of Gen. Simon Bolivar, in Central Park, yesterday afternoon, and most of them were obliged to stand patiently beneath the pelting rays of the sun."  When the drapings came off the speeches and ceremony went on as planned.  Parks Commissioner Egbert Viele diplomatically pronounced "This statue is not merely a work of art...It is a tribute of esteem from a young republic of South America to her sister in the North."

But in fact everyone, perhaps more so the Venezuelan representatives, were aghast.  Rafael de la Cora's Boliva was a stiff, comic looking figure--what was a century later termed a "monster-piece."

Before long the President of Venezuela, Joaquin Crespo, decided that the statue was "not fitting."  In 1896 his government commissioned Giovanni Turini to execute a replacement.  Completed in 1898, it was no more acceptable.  The New-York Tribune later said "Turini's Bolivar was modeled after a statue at Caracas, a pompous figure seated stiffly on a conventional Roman horse."

The New York Times politely said "A new statue ordered from another sculptor was not altogether satisfactory," while The National Sculpture Society "flatly rejected" the ungainly statue.  It was put in place.  The Venezuelan government refused to pay Turini his agreed-upon $75,000 commission (a rather stunning $2.3 million in today's money).  The New-York Tribune remarked "only $8,000 was paid."

In 1897 the Parks Commission could abide the hideous De la Cova statue no longer and "condemned" it, as worded by The New York Times.  The stone pedestal sat empty for 19 years until on the morning of April 4, 1916 New Yorkers awoke to find a bronze grouping of hounds in place.  In the dark of night a group of about a dozen men helped William Hunt Diedrich hoist his Levriers, or Greyhounds, into place.

Park police were not amused and the following day The New York Times reported "the playing dogs of Paris were thrown ten feet to the ground and 'damaged almost beyond repair.'"  Deiderich lamented that the Parks police had treated the gift "as a pretty woman sometimes spurns a flower."

Deidrich was perhaps unaware that the Venezuelan government had plans for the pedestal.  That year it sponsored a global competition to select a sculptor for a third stab at a respectable rendering of Bolivar.  Art critic Alexander Woollcott, writing in The Delineator a few years later remarked "Venezuela wanted to place a monument to him in Central Park, particularly as a quite painful equestrian statue of Bolivar had previously been taken out of that playground and hidden somewhere by New York's Municipal Art Commission."

Twenty artists competed and the winner was surprising, indeed.  Born in Ogdensburg, New York in 1869 Sally James Farnham had no artistic training.  The daughter of a U.S. Army colonel, she had traveled throughout Europe and Japan as a child where her father took her to art museums.  At the age of 32 she was hospitalized, recovering from a long illness.  The mother of three was bored and her husband, George Paulding Farnham, a jewelry designer for Tiffany & Co., suggested she use modeling clay to while away the time.

After her release from the hospital, Sally kept up her clay modeling.  As it turns out she was a long-time friend of Frederic Remington.  She took him a figure of a Spanish dancer, asking him if it were any good.  "Well, I'll be," he reportedly responded.  "I don't know how you learned it...but she's full of ginger.  Keep it up, Sally."  And she did.

At a time when female sculptors were rare, Farnham received the prestigious commission.  She worked on the 15-foot Bolivar statue in a rented Brooklyn studio while she simultaneously went through a divorce.  She depicted Bolivar in full military dress astride his prancing horse.  The South American described the statue in April 1921 as "shown in the attitude of acknowledging the shouts of an applauding populace, a gallant figure of a soldier and a gentleman."


Five years after winning the contest plans were made for the dedication.  Art critic Alexander Woollcott said Farnham's Bolivar outshown even Anna Hyatt Huntington's Jeanne d'Arc in Riverside Park.  "But this is a loftier figure, this one of Bolivar."  He called the Venezuelan gift a "towering monument that enters the annals of American sculpture as the largest work by a woman which history anywhere records."

The dedication was to be no small affair.  On April 17, 1921 the New-York Tribune announced that "Last week the great bronze was put in place on Bolivar Hill.  President Harding has accepted the invitation to assist at the unveiling on Tuesday."

Five days earlier The New York Herald had begun reporting on the luminaries already arriving in New York for the ceremony.  Dr. Estaben Gil-Borges, Venezuelan Minster of Foreign Relations, along with his wife and three children, arrived on April 11.  On the same ocean liner were five other high-ranking Venezuelan officials.  The newspaper added that now Charles E. Hughs, the Secretary of State, would be joining the President at the unveiling along with other cabinet members.

The unveiling ceremony, on April 19, was grand.  The Presidential party was escorted from the Waldorf Astoria by United States marines, soldiers and sailors and a detachment of sailors from the Brazilian battleship Minas Geraes.   At the park a squad of New York State Guardsmen fired the Presidential salute.  Two little girls, 7-year-old Patricia Paez MacManus and her sister Mariquita Paez MacManus, granddaughters of General Jose Antonio Paez, an associated of Simon Bolivar, pulled the cords to unveil the statue.

This time there was no disappointment.  Sally James Farnham's statue was deemed masterful.  The South American wrote "The bronze horseman fashioned by Mrs. Farnham is declared by all who have seen it to be a great work of art, worthy of our great city."

The Bolivar statue became the site of annual celebrations of the liberator's birthday.  But the beloved statue appeared threatened when President Franklin Roosevelt formed his War Production Board.  On August 7, 1942 Roosevelt endorsed a program to scrap bronze statues and recycle their metal into weapons of war.
The New York Times explained "At his press conference he agreed with reporters that some of the statues and the guns used as monuments would serve a more useful purpose if junked...Some of the statues, he said with a smile, could be replaced after the war with--and here he paused to cough apologetically--something more artistic."

Art critic Edward Alden Jewell, writing in The New York Times on March 7, 1943, warned patriotic New Yorkers not to be too hasty.  "Supposing an inclusive call for scrap bronze to have been sounded, which of the hundreds of statues in our city are to be deemed of particular worth and which are not?  More simply put which are good and which are bad?"  He said "Before Art gives Mars the green light," the merits of the city statues should be weighed  Jewell compiled a jury of one sculptor; an architect; a "widely known collector," Chester Dale; a painter and himself to do just that.

The group was brutally honest in its condemnation of some statues which it said "should go into war's caldron."   Not surprisingly, the Bolivar statue passed with the esteem of the cultured and knowledgeable crew.  (As it turned out, very few bronzes were lost to the war effort.)

In 1945 Mayor Fiorello H. LaGuardia prompted the city to rename Sixth Avenue "The Avenue of the Americas" to honor Pan-American ideals.  A new plaza was designed in Central Park at the head of the avenue and on November 15, 1948 The New York Times announced plans had been approved by the United States State Department to move the statues of Simon Bolivar and José de San Martin to either side of its entrance.  The idea quickly became a political issue.

On September 11, 1949 Oren Root, candidate for Manhattan Borough President, railed against the project's high cost.  He saw no logical reason to move the statues and said "the amount seemed excessive and that the $495,000 might better be used to rehabilitate some school or hospital."

It created a stalemate that was broken by the Venezuelan Government.  On October 19 Parks Commissioner Robert Moses announced that Venezuela had "formally requested" the statue to be moved and offered to pay all expenses.  The $190,000 necessary to move Bolivar left the city taxpayers with a substantially reduced bill.

The second unveiling of the Bolivar statue, on April 19, 1951, was only slightly less impressive than the first.  A parade up Fifth Avenue included 3,000 marchers, 360 Venezuelan military cadets, and American and Venezuelan dignitaries who rode in automobiles.  Five bands joined in the procession as did hundreds of school children.

But the best was to come.  The estimated crowd of 15,000 heard a message by President Harry Truman before G. Suarez Flamerich, President of Venezuela, unveiled the statue by pressing a button at Caracas, almost 2,000 miles away. 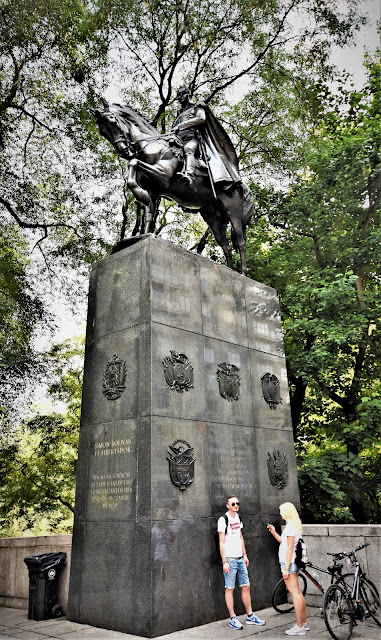 As had been the case for three decades, the yearly ceremonies on Bolivar's birthday continued for years.  One of the first important sculptures by a female artist, Sally James Farnham's monumental Simon Bolivar holds a commanding spot at the entrance to the Central Park.