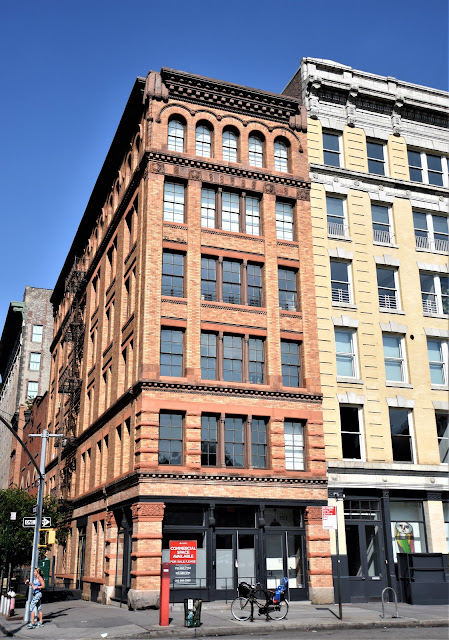 On July 1, 1823 Helen Lispenard Stewart was married to James Watson Webb in the mansion of her father, Alexander L. Stewart.  The three-and-a-half story Federal-style mansion sat at the southwest corner of Hudson and Hubert Streets.  Directly behind it was a two-story brick stable.

By the outbreak of the Civil War the days of wealthy homeowners and fashionable gatherings in the neighborhood were nearly a memory.

By the 1890's the Stewart mansion had become a seedy rooming house, occupied by dockworkers and other rowdies.  Among those was longshoreman William Goonan and his wife, and William Cleary, another dockworker.

On Saturday night, March 24, 1894 Cleary began drinking.  It would be the last time the roughneck got drunk.  At around 1:00 in the morning he was in Goonan's room and the two got into a vicious fight after Cleary claimed "that he was the best man along the docks."

According to The Evening World, "Goonan disputed Cleary's claim and the two men clinched.  They rolled out of the room into the hallway and down a flight of stairs.  On the landing below a big pool of blood tells that a fearful fight took place there."

Roused by the noisy affray, a boy ran from the house and called Policeman Schoenfield.  When the officer arrived he found Cleary stabbed in the face and neck and Goonan with a knife in his fist.  The Evening World reported "Goonan, who was also badly beaten in the fight, was committed to the Tombs without bail."

The old mansion was soon gone.  It had been purchased a year earlier, on April 14, 1893, by Joseph H. Bearns, who owned several properties in the area.  The principal in the liquor importing firm Joseph H. Bearns & Co., he had hired architect Julius Kastner to design a five-story loft building on the opposite corner of the block, at No. 10 Hubert Street, two years earlier.  In fact, the two had worked on similar projects since the 1880's.  They would collaborate again for No. 151 Hudson Street.

Kastner's completed structure was similar to several of his other designs for Bearns.  A handsome, industrial take on Romanesque Revival, it was faced in yellow Roman brick and trimmed in brownstone and red sandstone.  Designed in four parts separated by brownstone cornices, it exhibited expected husky Romanesque Revival elements like undressed bandcourses, lusty medieval-style carvings, arched openings at the top floor.  But Kastner softened the  design with the use of bullnosed bricks which rounded the corners.  While he could have saved Bearns money with terra cotta decorations, he opted for carved ornaments throughout and executed the complex cornice in stone.


As the building rose, Aspell & Co. was operating from Nos. 314-316 Greenwich Street.  The wholesale grocery dealers embarked on an unusual marketing scheme that year.  It opened a new department that offered certain items at wholesale prices to individual shoppers--a savings of up to 50 percent.

An advertisement on August 19, 1894 promised the housekeeper that on top of the savings, she could have "the goods delivered free of charge in or out of the city" (foreshadowing by more than a century retail giants like Amazon).  There was "a full line of staple and fancy groceries and wines, etc., also table delicacies suitable for city, country or seaside use."


Before the turn of the century Aspell & Co. had moved into No. 151 Hudson Street.  It shared the building with the Cincinnati-based S. A. Sloman Co.  Samuel A Sloman had made a drastic change to his family's business a few years earlier--from trading in furs to the manufacture of liquor.

Since the mid-1890's he marketed his Diamond Wedding Whiskey as a remedy rather than an intoxicant.  His ads promised it "invigorates feeble constitutions, renews life and arrests disease."  Others said it restored "power and suppleness to the muscles, warmth and richness for the blood."

Apparently the military bought into the restorative powers of Diamond Wedding Whiskey, for in 1900 both S. A. Sloman & Co. and Aspell & Co. were bidding on contracts with the U.S. Navy.

Three years later the directors of Aspell & Company agreed to dissolve the corporation.  It was replaced at No. 151 Hudson Street by Wm. A. Leggett & Co., wholesale grocers and dealers in condensed milk.  William Leggett had established his company in 1870.

In January 1908 Joseph H. Bearns leased the entire building to Bennett, Day & Co. "for a long term of years."  Wm. A. Leggett & Co. was allowed to stay on as a sub-tenant.

There was no long a Bennett in Bennett, Day & Co.  The wholesale grocery business was owned by husband-and-wife partners Henry Mason Day and Emily Garnett Day.  The Virginians had come to New York in 1874 and opened a dried fruit and nut business.  The New-York Tribune noted decades later that for "many years [Day] imported whole crops of fruits from Brazil and other countries and disposed of them to wholesalers in this country."

The Days were prosperous and maintained a summer home in Greenwich, Connecticut, where Henry moored his yacht.  But Henry's health had begun failing by the time his company leased the Hudson Street building.  He had essentially retired in 1903, spending most of his time in Europe, California and Florida because of his ill health.  On January 18 1909, a year after signing the lease, he died at the age of 58.

About the time of Day's death William A. Leggett suffered an attack of bronchitis.  His condition did not improve and a year later, in September 1910, he succumbed at the age of 81.

Although his death brought an end to Wm. A. Leggett & Co.; Bennett, Day & Co. continued under the control of Emily Day and her son, Lee Garnett Day.  Lee was, perhaps, less interested in the wholesale grocery business than in adventure.

On December 25, 1914 The New York Times noted that he had graduated from Yale University in 1911 and "has hunted big game from India, and recently returned from a trip of five months' exploration in Brazil."  The purpose of the article was to announce he was setting off on yet another expedition, this time "to explore unknown parts of the South American jungles under the auspices of the American Museum of Natural History and the Field Museum of Chicago."  Day personally managed and financed the extensive undertaking.

Day told the reporter "Not a specimen of the mammal or of bird life has ever been obtained there.  Should we be successful in getting specimens some of them at least should prove to be of value to the collections of the museums because of their rarity."

Bennett, Day & Co. remained at No. 151 through 1917, before moving to No. 165 Hudson Street.  That year Simon W. Greenbaum & Co. was incorporated by Simon and his brother, H. M. Greenbaum, and J. Socoloff to import and export peas and beans."  In February 1918 the firm leased the Hudson Street building.

The Produce District edged up against the wholesale shoe district.  As the years passed shoe merchants pushed out the grocery dealers in some areas of Tribeca.   When Simon W. Greenbaum & Co. signed the lease on No. 151, the O'Sullivan Heel Company was operating from nearby No. 131 Hudson Street.  By 1922 they had taken over the Greenbaum lease.

Founded by James and Humphrey O'Sullivan in August 1899, the firm manufactured replacement heels for men's shoes.  It marketed its rubber heels as being less jarring than the more common leather versions.  An advertisement in 1922 explained "One of the chief causes of fatigue is the strain of standing--the jar of walking on hard floors and pavements."  The hard leather heels gave no relief and "ordinary rubber heels are little better."  But as in the Goldilocks story, O'Sullivan's Safety Cushion Heels "combine just the right toughness for long hard wear with the greatest amount of springiness."

In 1908 author William Richard Cutter wrote "Countless imitators, in all countries, have paid their sincerest flattery, by their unscrupulous attempts to foist upon the public, their imitations of rubber heels, and the inevitable results, that none have been, as yet, successful, each claiming for his own to be as good as the 'O'Sullivan'--'The Standard'--the yard stick of the rubber heel industry."

O'Sullivan Rubber Co. was still in the building in 1950 when the Bearns estate sold No. 151 "to an investor," as reported by The Times on March 1.  The article noted that it was the last of Bearns's many properties to be sold and that the "sale was the first involving the property in fifty-seven years."

At the time the Tribeca renaissance was still a few decades away.  The first signs of change would come in 1980 when the ground floor became home to Sheba, an Ethiopian restaurant.  The New York Times food critic Mimi Sheraton approved, saying "Huge napkin-size crepes are the eating implements in which are wrapped curried stews such as the doro watt, and minchet abesh wott.  Kitfo, a raw ground beef specialty is a personal favorite."

Sheba made way for Thai House Cafe in early 1987.  Six months after its opening New York Magazine said "This is food you'd expect to find in a Thai home, carefully cooked and tamely spiced."  The restaurant remained in the space at least through 1991.

In the meantime the building had experienced cinematic exposure when it posed as the Hotel Broslin in the 1982 film Basket Case.  A large neon sign was hung from the fire escape for the outside shots of the fictitious hotel.

Although a Certificate of Occupancy for the commodious loft dwellings at No. 151 was not officially rendered until 2010; the building had become residential decades earlier.  In 1992 Birnbaum's New York, written by Stephen and Alexandra Mayes Birnbaum noted "Only the most urban personalities tend to live in TriBeCa--Harvey Keitel, Robert De Niro, and Martin Scorsese are among the pack who have lived in converted lofts at 151 Hudson Street."

Meticulously restored, the facade of Julius Hastner's 1894 structure is essentially unchanged.  Its three-color design stands out among its neighbors in the constantly-evolving Tribeca neighborhood.