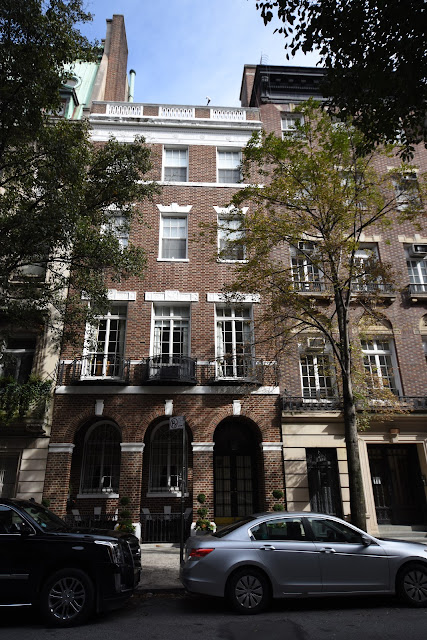 As a frenzy of development erupted on the Upper East Side following the end of the Civil War, scores of cookie-cutter brownstones sprung up along the blocks branching off Central Park.  Among them was a row of seven houses built by John C. Thompson--Nos. 37 through 49 East 68th Street.

No. 43 was home to John M. Shaw by the early 1880's.  Shaw was the principal of the brokerage firm of J. M. Shaw & Co. (and, as a matter of fact, its only member).  Dealing in commodities, mostly grain, his successful firm maintained two offices, one at No. 54 New Street and the other on West 23rd.  But Shaw's comfortable lifestyle came to a crashing end when, on the afternoon of April 17, 1891, his firm's failure was announced on the floor of the Stock Exchange.

The 68th Street house was leased briefly by Henry Spratley and his wife, the former Annie Ringwood Johnson.  Spratley's business dealings included his position as treasurer of the Traders and Travelers' Accident Company, of which former mayor Hugh J. Grant was president.  Also in the house were Spratley's five children from his marriage to Hester A. Awaise, who died in 1883.

Well-to-do women at the time went "calling" in the afternoons.  To ensure that they would not arrive at at someone's doorstep only to find that that woman, too, was out calling, the newspapers kept its readers informed of who was available to receive.  On February 18, 1892, for instance, The New York Times noted "Mrs. H. Spratley of 43 East Sixty-eighth Street will be at home Saturday afternoon."

The Spratleys moved on early in 1893 and in April the house was offered "For sale or to let."  The succinct advertisement in the New-York Tribune described it merely as a "four-story brownstone house."

Dr. G. A. Sabine leased No. 43 until around late 1895, when it was purchased by former congressman Charles Delemere Haines and his wife, Mary.  Haines's term of office in the U. S. House of Representative had just ended.

With his political career over, Haines returned to business life.  On September 25, 1896 The Sun noted "Mr. Haines is the President of or the majority stockholder of a lot of small railways."  His legal counsel was William Jennings Bryan, for whom the newspaper held little respect.  "Mr. Haines, when asked yesterday about his experience with Mr. Bryan as a corporation lawyer, said that Mr. Bryan was a personal friend, and that he did not wish to talk about the matter."

Also in the house were the adopted children of Charles's deceased brother; Eleanor Elizabeth and Benjamin Franklin Haines.  Following Eleanor's marriage to Louis H. Jones on November 15, 1899, an "informal reception" was held in the 68th Street house.  Benjamin, incidentally, would follow in his step-father's political footsteps, becoming mayor of Medford, Massachusetts and a member of the Massachusetts House of Representatives.

On June 5, 1902 Charles and Mary Haines sold No. 43 to Frederick Brooks and his wife.   Brooks was the son of John Brooks, and grandson of one of the original Brooks Brothers, of menswear fame.  It does not appear that the couple intended to live in the house, but (to use today's vernacular) to "flip" the out-of-date brownstone as an investment.

The architectural firm of Tracy & Swartout was hired to completely remodel the Italianate style structure into a modern, American basemen plan residence.  Plans were filed on March 25, 1903.  The following day the New-York Tribune explained "A four story extension will be built in the front and a two story extension in the rear.  A new light shaft and a fireproof elevator will be put in.   The extension will be of brick, with marble facing." The make-over cost Brooks the equivalent of just over $1 million today.

At the time Manhattan's wealthy homeowners were turning away from the frothy marble or limestone Beaux Arts style to the more sedate neo-Federal and neo-Georgian styles, executed in brick (perhaps most vividly exemplified by the massive Andrew Carnegie mansion completed one year earlier).  Tracy & Swartwout followed suit, transforming the vintage Victorian with a neo-Federal facelift.

The stoop was removed and the entrance lowered a few steps above sidewalk level.  The facade was pulled forward to the property line (substantially increasing interior square footage).  A dignified portico fronted the entrance, above which a fanlight echoed the shape of the arched openings on this floor.

Tracy & Swartwout used variegated brick with burned headers to simulate age.  Its warm brown-red tone was contrasted with white stone trim.   The splayed lintels of the upper floors were in keeping with the Federal style.  A stone balustrade partially hid the copper-covered mansard.

As the work neared completion Clarence Shepard Day and his family were living at No. 420 Madison Avenue.  In May 1905 they purchased the remodeled house from Brooks.  While the selling price was kept private, Day's $50,000 mortgage (about $1.5 million today) affords a hint.

Day was a principal in the brokerage firm of Day, Adams & Company and a director in several railroads.  He and his wife, the former Livinia Elizabeth Stockwell, had four sons--Harold, Julian, George and Clarence, Jr.   The boys had all attended Yale University and each followed decidedly different career paths.  Harold, who suffered from traumatic epilepsy as the result of a childhood accident moved to California.  His brothers all started out in their father's firm; but only Julian would remain as a partner.

Clarence, Jr. left the firm in 1896 to join the Navy and following the Spanish-American War pursued a career in writing and illustration.  (Interestingly, his grandfather, Benjamin H. Day had founded The New York Sun in 1833.)  George would leave Day, Adams & Company around 1908 to work at Yale.

Like Annie Sprayley, Livinia Day busied herself with social activities while her husband worked.  On December 14, 1905 the New-York Tribune noted "Mrs. Clarence S. Day will hold another of her Thursday receptions to-day at her new home, in East 68th-st."

Although Clarence, Jr. lived with his parents, the arrangement did not mean that he was struggling financially.  On September 19, 1906, for instance, The New York Times reported "The announcement was made to-day that the Yale Alumni Weekly has been purchased by Clarence S. Day, Jr."  Two years later he helped George found the Yale University Press.  (George became the treasurer of Yale in 1910, a position he held for years.)

The Days maintained a summer home, Upland Farm, in Westchester County.  The society pages kept track of the couple, The New York Sun noting on April 16, 1913 "Mr. and Mrs. Clarence S. Day will sail on the Mauretania next week and on their return will go to Upland Farm, their country place."  And in 1922 The New York Herald announced that the couple "will leave New York early in May for their country home...Mrs. Day held her last at home for the season recently at her town residence, 43 East Sixty-eighth street."

By now Clarence, Jr.'s poems, short stories and cartoons had appeared in popular magazines and newspapers like Harper's Weekly for a decade.  By the end of World War I he was an established writer with a regular column in Metropolitan Magazine.  His first book, a satirical look at civilized man's behavior, This Simian World, was published in 1920.

He was a semi-invalid due to intense arthritis contracted at an early age.  He wrote mainly from his bed in the late hours, sleeping most of the morning and afternoon.  A historian for The New York Public Library notes "While entertaining family, friends or new acquaintances, Day was an informal host who rarely wore more than a crepe dressing gown.  He saw visitors in the bedroom, which also served as his office, surrounded by his books, letters, manuscripts and drawings."

In 1922 Clarence, Jr. met a young art librarian, Katharine Dodge, whom he hired as his secretary.  The employer-employee relationship blossomed into a romantic one.  Clarence moved out of the 68th Street house in 1925 and he married Katherine in 1928.  He went on to write best-selling books like his 1935 Life With Father, the autobiographical work for which he is best remembered.

On January 7, 1927 Clarence Shepard Day died of pneumonia at No. 43 East 68th Street at the age of 82.  While his obituary in The New York Times outlined his long career in the brokerage business, it said "He was best known, however, for his work in the development and financing of railroads."

Following Clarence's death, the 68th Street house had been purchased by Sidney A. Kirkman.  Before he and his wife, the former Mary Lewis, moved in, they commissioned architect Walter B. Chambers to make significant changes.  New floors were installed at different levels, the floor plans were rearranged, and a 17-foot rear extension was added.  The first floor was recessed behind a charming brick arcade, the mansard was removed and the facade of the top floor moved forward.  It was now topped by a brick parapet interrupted by openwork stone panels.

Kirkman was the head of Kirkman & Son, a manufacturer of soap and soap products.  Its large factory was located in Brooklyn.  In 1930 Colgate-Palmolive acquired the firm taking on its popular brand names like Lux and Borax as its own.


The Kirkmans summer home was on Cotuit, Massachusetts.  Mary was a member of the National Society of Colonial Dames and the Colony Club.  Like her fellow club members, she was active in charitable causes.  She was especially involved with the Stony Wold Sanatorium.  On January 13, 1936, for instance, she hosted a tea for the committees working on plans for the Yankee Doodle Ball to benefit that facility.

As developers razed grand mansions to replace them with apartment buildings, Sidney A. Kirkman was pro-active in preserving his quiet block as well as the light and air to his own home.  As they became available he purchased the Hoffman Nickerson house at No. 47, and the W. H. Porter residence at No. 45.   He then had "private-house restrictions" written into the deeds before reselling them in 1946.

Kirkman became ill in the spring of 1953 and died at Columbia-Presbyterian Medical Center on May 11.   Mary died in the 68th Street house ten months later, on March 10, 1954. 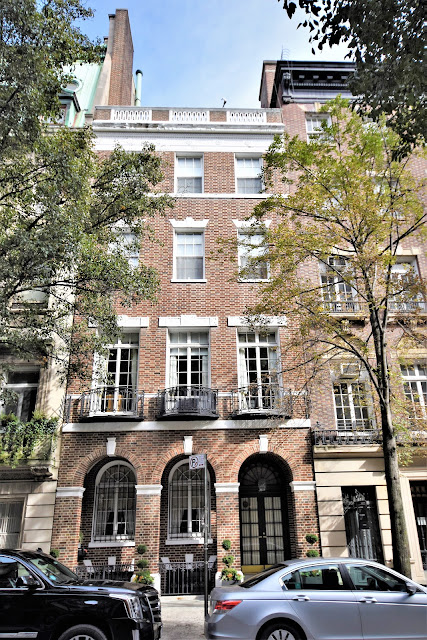 The mansion continued life as a single-family residence, although today there is admittedly an apartment in the basement.  The product of two significant architectural make-overs, it has been almost perfectly preserved.