The Charming 1821 Survivor at 28 Commerce Street 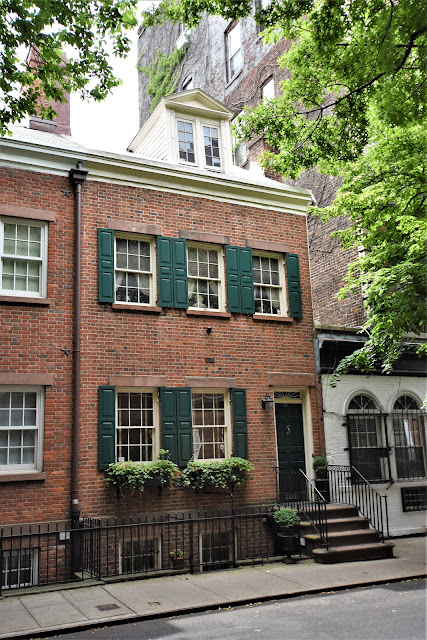 In 1821, about a year  before Cherry Lane was renamed Commerce Street, shoemakers Asher Martin and John Bennet got in on the building boom in Greenwich Village by erecting three modest homes at what would be numbered Nos. 24 through 28 Commerce Street.

Faced in red Flemish bond brick, the frame Federal-style houses were intended for working class families.   Two-and a half stories stories tall, each was just 16 feet wide.  They displayed none of the upscale details that defined more affluent residences.  Plain brownstone lintels and simple wooden cornices made do.  Nevertheless, the architect added decorative molding around the sunburst transom bar above the paneled door.

It does not appear that either Bennet or Martin moved into one of the homes; although both changed professions before long,  By 1835 Bennet (perhaps having learned his new trade when constructing these houses) was living at No 2 Thames Street and listing himself as "carpenter."  Asher Martin was working for the city as an "assessor" that year, and living at No. 200 Grand Street.  The following year he received a promotion to City Collector of Assessments.

Houses like this routinely had a secondary building in the rear--either stable, a small house, or a shop (like a carpenter or blacksmith shop).  At the time of his death Spear was leasing the rear structure to brothers Charles and Gilliam B. Seely.  Both men lived nearby--Charles at No. 89 Commerce Street and Gilliam at No. 104 Leroy Street.

They used the building for their "soda water factory," known as Seely & Brother.  Using the address of 28-1/2 Commerce Street, they would manufacture and bottle soda water here for years.  For a period it seems that the building doubled as both factory and stable for the company's delivery truck.  On October 30, 1862 the brothers looked to replace one of the horses:

FOR SALE: A black horse, 16-3/4 hands high, short tail, very stylish and an excellent military horse; 5 years old, and a smart traveler; would make a good express or carriage horse, or fit for any use; warranted right every way.  Apply at Seely's soda water manufactory, 28-1/2 Commerce street, near Bedford.

Two years later another horse was offered for sale by Seeley's, this one a "brown Hambletonian mare."

In the meantime, following Garret Spear's death No. 28 was operated as a rooming house.  Isaac Laforge, a "cutter," was living here in 1861, as were Isaac and Helen M. Lafarge.  Their marriage ended in divorce that year.  J. Sullivan was renting a rented room in the house on August 19, 1863 when his name was pulled in the Union Army draft lottery.

The proprietor of the rooming house, like so many others, was reticent to rent to an unmarried woman.  In 19th century New York, a female of questionable character could seriously damage the reputation of the house.  An advertisement in The New York Herald on June 5, 1864 offered "To Let--A nicely furnished front room on second story, to a gentleman only."

The policy was still in place six years later.  An advertisement on February 17, 1870 read "To Let--A nicely furnished attic room, to gentlemen only."  The $2 per week rent would equal about $39 today.

The attic room was not the most comfortable.  Not only did the tenant have to deal with its sloping ceiling. but in the days before air conditioning or central heat, it would have been stiflingly hot in the summer and cold in the winter.  It was vacant again in 1871, and again in October 1872.  The price remained the same.

At the time Timothy Colbert worked in a loft building at No. 107 Front Street, steps from the East River docks.  In the years before elevators, open shaftways fitted with pulleys were used to hoist materials up and down.  It was a dangerous system that repeatedly resulted in injuries and deaths.  On July 1, 1873 The New York Times reported that the 38-year old Colbert had plummeted from the third floor to the basement, "and was seriously injured."

Seely & Brother was gone by May 1873 when the rear building seems to have been used as a livery stable.  A patron who stored his buggies here offered them for sale that month.   "Two splendid leather top (City made) buggies; good for city or country; price $200 each."   Each would cost the potential buyer about $4,250 today.

The little house continued to house respectable, blue collar class families.  The family of little Mamie Bogart lived here in 1888 when the fifth grader was enrolled in the newly-built Public School No. 8 on King Street.

No. 28 received inside plumbing in 1925 and an interior alteration in 1935.  The latter was no doubt in anticipation of renting unofficial apartments.  The Department of Buildings caught up with the owner a year later, when a "Multiple Dwelling Violation" was issued.

Problems came again in 1999 when the little house was deemed an "unsafe building."  The condition was corrected and No. 28 returned to life as a private family home.  The owner, Richard Verrazzani, incurred the Department of Building's displeasure again, however.  In 2010 he was cited for creating an illegal apartment in the basement.

Despite an occasional brush with the city, the appearance No. 28 and its 1821 neighbors are little changed.  They create a picturesque snapshot of early 19th century Greenwich Village.