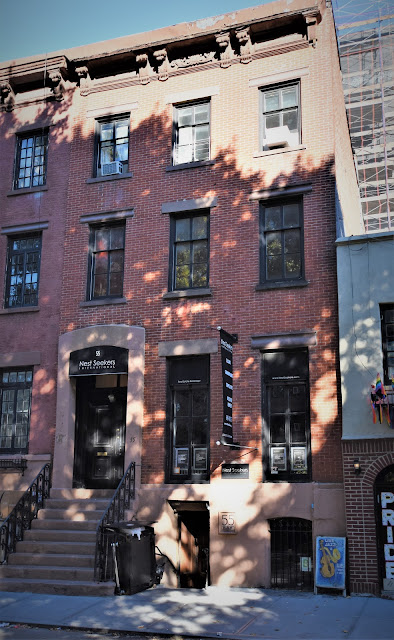 In 1853 three fine brick-fronted homes were completed at Nos. 55 through 59 Christopher Street.  Each was 22-feet wide and three stories tall above a high English basement.  The double-doored entrances above the tall stoops were embellished with simple molded Italianate framing.  The floor to ceiling parlor windows were most likely fronted by cast iron balconies.  Cast metal cornices featured paired brackets and fussy decorative cartouches.  The elements that stood out as somewhat unusual were the graceful rolled lintels of the openings.

Nos. 57 and 59 were owned by Peter J. Christie and Gilbert J. Bogart, respectively.  Both were in the building trade, so it is likely they were responsible for the construction of the row.  John Kemp, the owner of No. 55, however, was a well-to-do merchant.  What, if any, connection he had with the other two is unknown.

Newspapers of the day printed the passenger lists of sailing ships departing to and arriving from Europe.  The names of John Kemp and his wife, like other moneyed New Yorkers, appeared in print often over the years.  One crossing, however, stood out.

Returning from England in December 1854, the Lady Franklin was buffeted by gales.  Under the command of Captain J. Thompson, the crew managed to successfully weather the storms, while providing as much comfort to the guests as possible.  Before reaching New York Harbor, several of the passengers, including the Kemps, signed a letter of thanks to the captain, which was reprinted in The New York Herald on Christmas Day that year.  It said in part, "We, the undersigned passengers, on board your fine and strong ship, being about to terminate our voyage from Liverpool to New York, after a somewhat rough and boisterous passage, cannot part without expressing to you our strong admiration of the vessel, and the various arrangements made for our health and comfort."

John Kemp seems to have worn a Southern-made pocket watch; a pricey accessory which he discovered missing in the winter of 1861.  His advertisement in The New York Herald on February 21, 1861:

Lost, on Tuesday, in the vicinity of College place [West Broadway today] or Hudson street, a gold Watch and Chain, marked Wm. Ashton, Charleston, S. C.; No. 6,496.  The finder will receive the above reward by leaving it at John Kemp's, 55 Christopher street.

As was the case in many families with large houses, in 1858 the Kemps rented a portion or their home.  Their advertisement in The New York Herald in March read "To Let--Part of house 55 Christopher Street, consisting of front and back parlors, kitchen and bedroom on the second floor; also part of the third floor with privilege in bathroom, washroom and subcellar."

The couple apparently did not relish the thought of rowdy children, however.  The ad concluded "A small family of grown persons preferred."

Like the Kemps, the Stevensons took in boarders by 1880.  Two well-to-do bachelors, Halstead C. Hynard and Albert H. Schoudel lived in the house that year.

Schouldel would be a part of a fascinating, if unrelated, side story years later.  After marrying, he moved into a house in Brooklyn.  When he and his wife went to their country home one weekend in June 1893, The New York Times reported that they left "a negro servant, Emma Crawley, in charge of the house."  Emma decided to throw a party

A private watchman saw eight young men enter by the basement door on Saturday, around midnight.  "Shortly afterward five other young men were admitted."  The watchman called police who stormed in.  Eight men were arrested and two girls were found hiding in the basement.  "The rest of the party escaped," said the article.  One may assume that Emma Crawley lost her job.

The Stevensons would be the last to own No. 55 as a private residence.  As they prepared to move to Williamsburg, Brooklyn on April 1, 1889 they sold it to John P. Gaw for $13,500.  Gaw operated it as a rooming house; prompting the Real Estate Record & Guide to term it a "tenement" when he sold it in 1893; making a $50 profit.

Among the more colorful roomers here came along early in 1916.  The 78-year former school teacher old had left his 61-year old wife, Jeanette Bernard, behind in Brooklyn.  Their domestic troubles had started when Bernard came across a former student, Jennie M. Thompson, who was now a teacher herself.

Jennie, who was 51, was an accomplished artist and when Bernard expressed an interest in painting she began giving him lessons.  It did not sit well with Jeanette.  Exactly what led to her husband's moving into the Christopher Street apartment is unclear, but when she appeared before Justice Kapper in the Brooklyn courts on February 4, 1916, she accused him not only of abandonment, but with "being on too friendly terms with Miss Jennie M. Thompson."

The judge was frustrated with the entire affair.  "It is a pity that the elderly couple have reached a bitter matrimonial litigious stage instead of that peaceful evening of life to which the happily mated look forward," he said.

At the time of the Bernards unpleasantness, Greenwich Village had become Manhattan's Bohemia.  Cafes and tearooms sprouted up in the basement levels of houses.  Artists, poets, musicians and actors gathered in the subterranean dens, exchanging ideas.  No. 55 was about to get one of its own.

Mary Alletta Crump (who went by her first initial and second name) had come from the South to take a nursing course in a New York hospital.  The stress of the training was too much, however, and she was advised to follow "a lighter profession."  Taking inspiration from her surname and an old family recipe, she opened The Crumperie in the basement of No. 55 in 1917.


M. Alletta added to the allure by wandering among the tables strumming a ukulele and singing folk songs.  Multilingual, she sang French and Russian ballads as well as Negro spirituals.  Word spread across the Hudson and on November 17, 1922 Margaret Rohe, writing in the Perth Amboy Evening News, gave offered a charming glimpse inside.

"In the basement of a little old-fashioned house at 55 Christopher Street Miss Crump set up her Lares and Penates and tea tables and crumpet utensils...Here daily from 11:30 a.m. to 6 p.m. she purveys steaming, amber-colored tea and hot buttered crumpets on which you may heap with your own lavish hand a mixture of powdered sugar and cinnamon."
In other such tearooms, like Edith Unger's Mad Hatter a few blocks way, local artists were welcomed to add their own personality to the walls.  The Crumperie was no different.  Artists with crayons converted the water stains on the walls to elephants, sheep and other frolicking animals.

Rohe wrote "It's a refreshingly quaint little spot, this Crumperie, furnished in real old colonial furniture with braided rugs on the floor and bits of patchwork quilt for curtains at the windows.  A bright fire crackles on the hearth...it is no wonder it is a favored haunt of the original 'gang' of the Village, those clever radical young artists, sculptors, actors and spring poets who first discovered this old corner of New York as a Mecca for true Bohemians."

Mary Alletta Crump had moved on by 1924; but it was not the last New York would hear from her.  In 1941 a fleet of "mobile kitchens" was established by the American Women's Voluntary Services.  The food trucks were on hand for "emergency feeding work in case of disaster."  When the first class of trainees was graduated on July 2, they received their diplomas from M. Alletta Crump.

In the meantime the basement space had become "55," a tearoom which doubled as exhibition space.  On March 2, 1924 The New York Times reported "A group of old league students now well into the professional stage are exhibiting for the third time at "55," that is, at a hospitable tearoom at 55 Christopher Street."

Apartments upstairs were being rented by financially comfortable tenants in the Depression years.  On June 15, 1930 The Times reported that Donald Snedden had taken an apartment in the building.  The 27-year-old was an Associate Professor of Psychology and Statistics at New York University.  His wife, the former Marcia Mendenhall, was a psychiatrist at Bellevue Hospital.

A few months after moving into their new apartment, the Sneddens purchased a sloop, the Sea Fox, with intentions of making a cruise to Bermuda in June 1931.  On Saturday, May 23 they hosted a sailing party on the Long Island Sound.   The guests included Marcia's brother and his wife, several educators and 30-year-old Robert Johnston, a radio and night club entertainer.  Of the eight persons on board, at 30-years-old, Johnston was the only one not still in his 20's.

A violent gale blew in, with winds reaching 46 miles per hour.  The Sea Fox was lost; and planes and boats searched for the vessel for days.  On Tuesday a fisherman plucked the body of 25-year old Marcia Snedden from the waters.  One by one over the subsequent days the other seven bodies were recovered.

Following the repeal of Prohibition the basement space where tea and crumpets had been served for years became Hymie's Bar.

For years, beginning in the early 1960's, the Country Dance and Song Society had its headquarters at No. 55 Christopher.  It was headed by May Gadd, considered at the time to be the foremost authority in the United States on English country dancing and its American cousin, square dancing.  (She had been consulted by choreographer Agnes de Mille for help in the 1943 musical Oklahoma, among other stagings.)   Every Tuesday evening country dance classes were held in the Christopher Street space, at least through 1977.

Around 1983 the former Hymie's Bar gave way to 55 Bar, a jazz club.  It became an annual destination during the Greenwich Village Jazz Festival.

The 20th century was not kind to John Kemp's once-elegant home.  The carved embellishments of the entrance were shaved flat (as were the lintels of the central windows, no doubt to accommodate a fire escape), and the basement and stoop were covered with a stucco-like substance.  The deteriorating cornice was given a slap-dash repair with galvanized metal painted to match.  Today there is one apartment, on the top floor in the building. 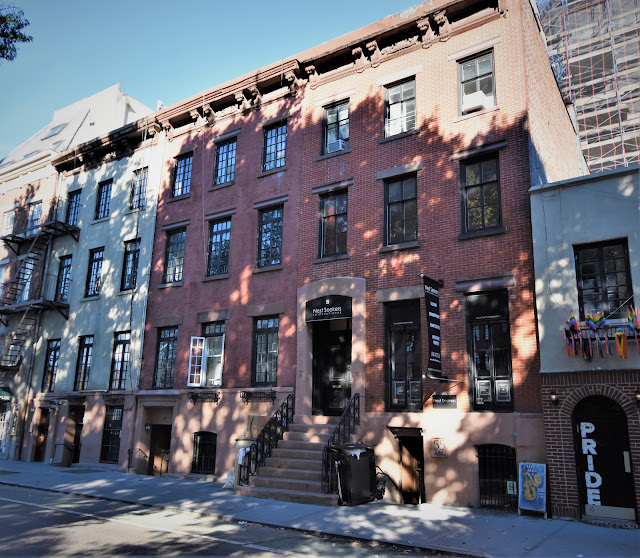 But it is the basement, oddly enough, where the history of No. 55 played out and continues to do so today.