Mansion architect C. P. H. Gilbert was busily designing a number of townhouses on the Upper West Side in 1895.  Unlike the rows of speculative houses rising throughout the district, most of Gilbert's were direct commissions.

Late that year the architect was hired by James M. Townsend and his son to design side-by-side homes at Nos. 318 and 320 West 75th Street respectively.   Gilbert treated the two homes independently with no attempt at melding the designs.

The James Mulford. Townsend home would stand slightly taller than No. 320.  Its sandy-colored brick upper floors sat on a limestone base.  Its somewhat rigid Renaissance Revival design was softened by delightful carvings of scallop shells and squiggly ribbons below the third floor cornice.  The shell-and-ribbon motif was repeated in the panels between the fifth floor windows; and a line of shells decorated the primary cornice.

Townsend was born in New Haven, Connecticut in 1852.  He graduated from Yale University in 1874 and then from Columbia Law School.  He married Harriet Bailey Campbell, the daughter of Professor John Lyle Campbell of Washington and Lee University, on November 15, 1882.   Theirs would be a large family.  The couple had six children--Harriet Campbell, James Mulford, Jr., John Campbell, Edward Howard, and twins Virginia and Donald.

The Townsends maintained a summer home at Pelham Manor, New York; described by The New York Times in July 1896 as "one of the most secluded localities on the Sound."  The article mentioned "No trade is carried on inside the manor limits."

Townsend's social status was evidenced in his club memberships.  Men of Progress in 1898 said "He is identified with many of New York's most prominent clubs."  Among them were the University, the Colonial, the New York Athletic and the Barnard Clubs.

Harriet's entertainments in the house were not lavish.  Society columns commented on teas and receptions rather than sumptuous dinners and dances.  Such was the case on February 26, 1900 when she hosted an 11 a.m. lecture by Mrs. Ruutz Rees on "Buddhism."

The Townsends remained at No. 318 until early in 1909 when it was sold to Dr. Frederick Merwin Ives.   An unlikely combination of physician and civic engineer, he was born in Rome in 1866, where his well-known sculptor father, Chauncey Ives, maintained his studio.  Ives had graduated from the University of Pennsylvania in 1889 and was married to Edith Wetherill, a graduate of Bryn Mawr College.

The couple had not lived in the home long before one of their servants was the near-victim of a robbery.  James Hanley had fallen asleep under a tree in Fort George Park on the evening of June 22, 1910.  His reverie was abruptly broken by uninvited movements.  He awoke "to find a sailor in full uniform bending over him and fumbling at his pockets," reported The New York Times the following day.  "He noticed, too, that his gold chain, worth $10, was missing."

Hanley jumped up and wrestled with the sailor, drawing the attention of a passing policeman.  The uniformed man was arrested and Hanley's watch chain was found in his pocket.  At the station house the crook said he was Thomas Doyle, attached to the U.S. cruiser the Franklin, and he had come to New York from the Norfolk Navy Yard on furlough.  The police were not quick to accept his story, telling reporters they "believed he is one of several fake sailors who beg in uniform for a living."

When the United States entered World War I Ives joined the Medical Department of the Army, with the rank of captain.  It may have been his absence that led to the 75th Street house being leased.  In September 1919 Albert Gran rented it.  But if the couple intended to return, it does not appear they ever did.

The buyer was real estate operator Henry Schwamm.  Reports said he purchased it "for a client."  Apparently the client was himself for he and his wife, Clara, moved in.  Like Ives, Schwamm was multi-faceted.  In addition to his real estate business, he was an authority on medical and dental jurisprudence and wrote extensively on the subject.

The couple had five children, Gustave, Sidney, Blance, Camille and Frances.  They received the privileges of well-to-do families and extensive education.

When son Gustave's engagement to Norma June Wexler was announced in December 1932, for instance, newspapers noted he "was graduated from the College of Arts and Pure Science and the School of Law at New York University."   Gustave was still living at home and practicing law at the time.

Dr. Henry Schwamm died at the age of 64 on July 22, 1943.   Three years later the house was converted to apartments, two on each floor except the top, which had three. 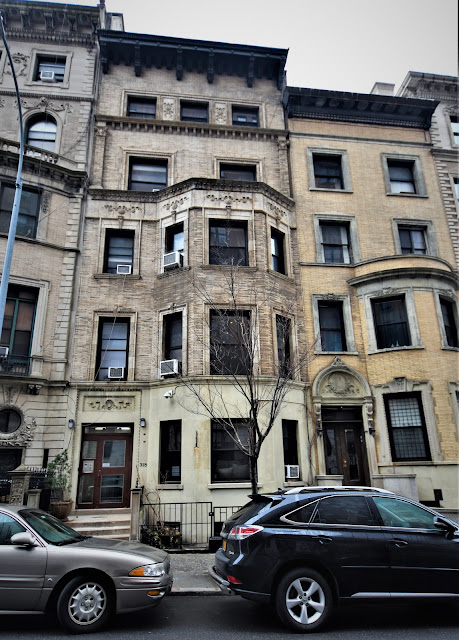 Despite the unfortunate apartment entrance doors and an inexplicable coating of paint over the limestone of the first floor, C. P. H. Gilbert's stately design endures between two other contemporary Gilbert houses.

photographs by the author
Posted by Tom Miller at 2:11 AM