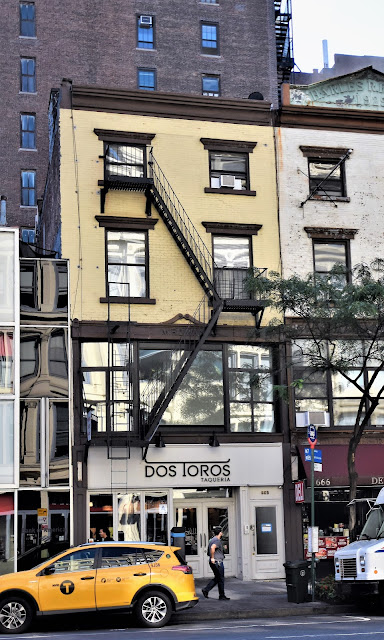 In 1850 William Johnson began construction of six brick-faced homes on the east side of Sixth Avenue, between 20th and 21st Streets.  At 20-feet wide the four-story homes were intended for well-to-do families decades before the avenue would become a major shopping thoroughfare.

No. 334 in the middle of the row, became home to Catharine Danforth.  She remained until early in 1862 when she moved to No. 57 West 24th Street.  On March 18 that year an advertisement in The New York Herald offered "To Let--The house 334 Sixth Avenue, near Dr. Muhlenberg's church, in complete order; gas fixtures, bath, range &c; suitable for a physician."

It was not a physician who leased the house, but the New-York Ladies' Educational Union.  With civil war raging in the south, they rented the property for their Institution for the Children of Deceased or Disabled Soldiers in the house.

First, that of the care-worn, war-made widow, who is thankful to leave her little one under the kind auspices of Mr. and Mrs. Davis, the Superintendents, while she seeks perhaps for the first time a day's employment.  Again, it is a refuge for the young girl of intelligence and capacity, who would fain accept instruction to fit her to combat unwonted trials in a commercial sphere; and a home for the little girls and boys, some of whom wear garments of mourning that should be looked reverently upon by every loyal American, especially those who in tranquility of luxurious homes, entertain but faint visions of the battlefield.

The article described the house as being "large, and will require much to make it the home-place that is intended."  To fund the furnishing and renovations, the New-York Ladies' Education Union held week-long fairs in places like the Cooper Institute.  And as Thanksgiving approached, a "Thanksgiving Donation Visit" was advertised.  On the holiday the doors were opened to visitors from 3:00 to 8:00.

A few weeks earlier Rev. Stephen H. Tyng, rector of the fashionable St. George's Church on Stuyvesant Square, had heard unflattering rumors about the institution.  On November 17 he took out an ad that said in part "Having been informed that certain statements unfavorable to the character of the 'Institution for the Benefit of the Children of Deceased or Disabled Soldiers'...have been presented to the press...I desire personally to certify that this institution has been established by ladies of the most indubitable excellence of character and dignity of social position."

Soon after the end of the war the Institution was dissolved.  In 1869 owner Mary McKenna converted the first and second story to storefronts.  The shop space was leased to ice cream manufacturer M. Rowan & Co. while the upper floors became home to another institution, the Shelter for Respectable Girls.  It was run by the Sisterhood of the Holy Communion, connected with the Church of the Holy Communion on the corner.

On February 23 1873 The New York Herald noted that "during the past two years it has received and provided with situations over five hundred homeless, but respectable women.  The majority of these were Christian women, many of them communicants in various Christian churches, some of them persons reduced from affluence to poverty, and cast, from no fault of their own, without a friend upon the world."  The Shelter for Respectable Girls remained at least through 1876.


In April 1875 Rowan & Co. renewed its lease.   By now Sixth Avenue was transforming into a major shopping district as small buildings from the 1840's and '50's were demolished to be replaced by lavish emporiums.  It had proved to be a perfect location for an "ice cream saloon."

Michael Rowan had come from his native Ireland in 1851 and established his ice cream business in 1866.  He manufactured his ice cream in the cellar.  The firm supplied bulk treats to restaurants and hotels and for large events like excursions.  The "saloon" (a term later changed to the more benign "ice cream parlor"), was a favorite stopping point for the women shopping along Sixth Avenue.

Sales were brisk on the hot Saturday afternoon of August 26, so when the shop was broken into that night the safe was full.  On August 31 The New York Times reported "The ice-cream establishment of Messrs. Cowan [sic] & Co., at No. 334 Sixth avenue, was entered by burglars on Sunday morning.  They broke open a small safe and carried off the contents of the money-box, consisting of $1,500 in cash and a check on the Bank of the Metropolis for $14.40."  The take would equal about $35,700 today.

Rowan, his wife Theresa, and their sons, Joseph Charles, Francis (known as Frank), Ambrose, Marten and Edmond, lived above their other ice cream shop at No. 742 Sixth Avenue at the time of the break-in.

In the 1878 Journal of the Fair for the New St. Patrick's Cathedral, Rowan advertised his ice cream as "The only old fashioned cheap hand made Ice Cream in the city."  (The term "cheap" would be substituted with "affordable" today.)  Ice cream was priced at $1 per gallon and "French & Italian Creams" at 60 cents per quart.  A gallon would cost $25.50 today.  The ad noted "Liberal discount to Church Festivals, etc."

A separate article in the Journal promised "Lovers of ice-cream in its purity, charlottes that are delicious, French and Italian creams surpassing any house in the city in quality, will find at M. Rowan's establishments, 334 Sixth avenue...and 742 Sixth avenue...everything to suit the most fastidious taste."

Joseph Charles apparently had no interest in going into his family's business.  In 1884 he enrolled in Columbia College as a law student.  By now the Rowans had given up the other store and moved into the upper stories of No. 334.

In 1888 Illustrated New York gushed about the store saying "Few among the many inviting and excellent establishments devoted to the manufacture and sale of ice-cream and kindred toothsome products on Sixth Avenue have secured a more enduring hold on popular favor than the well-known and flourishing ice-cream depot and refreshment parlor of Mr. Rowan."

The article described the 20- by 70-foot saloon as "neatly appointed and well kept"  It added "Five polite and efficient assistants are employed while a delivery wagon is in steady service."

In 1897 the estate of Mary McKenna enlarged the store space for Rowan.  It hired architect P. F. Brogan to design an extension to the rear, costing $3,500.  The increased business also necessitated more than the single delivery wagon mentioned in 1888.  On July 10, 1900 the Confectioners' and Bakers' Gazette noted "many wagons [are] kept going constantly to supply the demand."

The McKenna estate brought P. F. Brogan back in January 1901 to design an new storefront.  Michael Rowan died around 1907.  The business was continued under Frank, Ambrose and Edmond.  While Joseph Charles continued to live above the store at least through 1912, he was not involved in the business, having followed his legal career.

By the end of World War I the retail stores had abandoned Sixth Avenue, moving north to Fifth Avenue and Herald Square.  Nevertheless, the Rowans stubbornly stayed on.  On August 26, 1919 The Sun reported that Edmond Rowan had renewed the lease on the building for another ten years.

The ice cream parlor remained downstairs, but the upper floors were converted for business by architects Gronenberg & Leuchtag in 1920.  At the time the windows of the two top floor were enlarged.  Simon Waist & Dress Co. moved in that year, headed by Michael Simon.

In 1925 Sixth Avenue was renumbered and No. 334 became No. 668.  At the end of Edmond Rowan's lease the ice cream store was gone, ending its 60-year history in the space.

The Sixth Avenue neighborhood suffered decline and neglect for decades, only to be rediscovered as "The Ladies' Mile."  The massive retail emporiums, many of which had stood essentially vacant, were repurposed as residential and commercial buildings.  A surprising renovation of No. 668 restored the residential-style windows on the upper floors, complete with pressed metal cornices matching the historic examples next door.

photographs by the author
Posted by Tom Miller at 1:28 AM