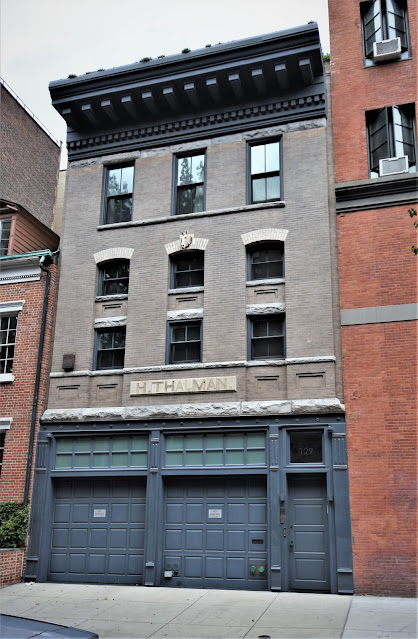 Herman Thalman lived at 129 Charles Street in the spring of 1897 when he commissioned architect Henry Andersen to design a replacement building on the site.  The plans, filed on April 30, called for a brick "stable and dwelling" to cost $12,000--about $366,000 today.   Construction did not start for many months, and was completed in 1898. 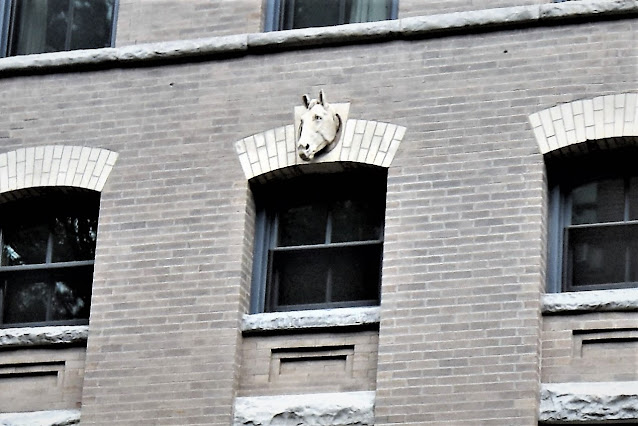 Henry Thalman's surname was originally spelled with an additional "n."  For some reason, he went back and forth, using both spellings, Thalmann and Thalman.  For this project, he used the "Thalman" spelling on all the paperwork.

Although the Thalman family owned a house at 269 West 10th Street, they moved into the dwelling space above the stable.  Thalman leased the stable section to independent proprietors.  The first was E. M. Creigle who sublet the operation in 1898 to the National L. A. Fixtures company.  The concern ran livery stables in several other locations.  Only a year later W. H. Rich was in charge of the stables, his business listed as "horses, vans, &c."

The building was purchased by James F. Carroll for $22,500--more than $660,000 today.  He, like Thalman, he leased the building.  Carroll owned properties throughout the city, several in Greenwich Village.

William Fox ran his "stable and trucks" operation from ground level from 1902 through 1906.  The stable business saw change by the end of World War I as automobiles increasingly replaced horses.

Following Carroll's death his estate sold 129 in May 1922.  It was purchased by Henry J. Comens, head of the Henry J. Comens, Inc.  He and his wife, Helen, had four children and had lived in the upper floors of the building since 1913.

Although he originally continued the business as a boarding stable and offered "horses to hire;" before many years his company operated solely an auto-truck firm.  Comen's trucking company was listed as a "common carrier" by the Interstate Commerce Commission, which meant that his trucks were licensed to handle freight from various shippers and manufacturers.  (The business was apparently profitable, for in 1922 he was driving a Cadillac sedan.)  Comens disguised Henry Thalman's name above the truck bay by covering it with his own name.

On April 23, 1941 The New York Times reported that Comens had leased "the three-story commercial building" to John Spagnuolo.  The article noted it would be used "for the servicing and storage of machinery ad pneumatic equipment."  Spagnulolo's occupancy would be brief, only through 1943.

Aacon Contracting Co. purchased the building in 1943.  It operated its woodworking operation here through 1949 when the building saw a rapid-fire turnover in ownership.   Purchased by Lilliam Schumacher, it was resold on June 27, 1949 to Richard Nussbaum.  Seven months later, on January 15, 1950, he sold it to The 129 Charles Street Corporation.

The new owners converted the ground floor to a garage and metal shop for tenant Matus Roffing Co.  Department of Buildings documents allowed two trucks to share the space with the metal shop, while insisting that the upper floors were to remain "permanently vacant."  Matus Roffing Co. remained here through 1965.

In 1972 Leonard Kaye and John L. Pace (of Kapac Realty Co.) purchased 129 Charles Street.  A subsequent renovation resulted in a "storage area and offices" on the first floor, offices on the second and a photographic studio on the third.  The ground floor was reconfigured with wider bay doors which erased the western entrance and one of the historic cast iron piers.  The neighborhood's increasing popularity (and subsequently its property values) was evidenced in Kaye's taking out of a $700,000 mortgage in 1986--equal to more than $1.5 million today.

That situation was even more clearly reflected in 2008 when the building sold for $7 million.  On April 16 The New York Times reported "A developer plans to convert this 7,000-square-foot, four-story commercial building, now with two tenants, into apartments." 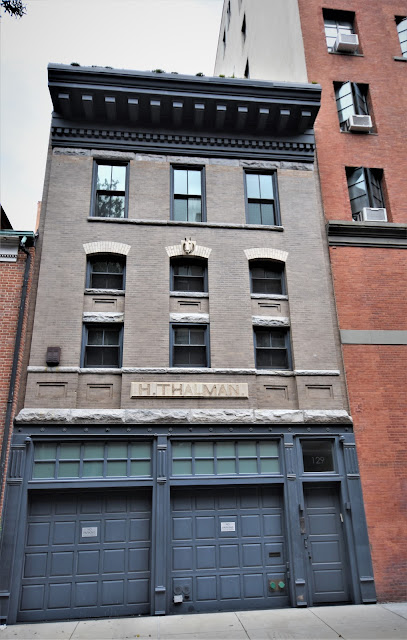 Those apartments would survive only eight years.  A renovation completed in 2016 created a single-family house above a two-story garage.  Included in the conversion was the replacement of the long-lost cornice.

photographs by the author
no permission to reuse the content of this blog has been granted to LaptrinhX.com
Posted by Tom Miller at 3:01 AM