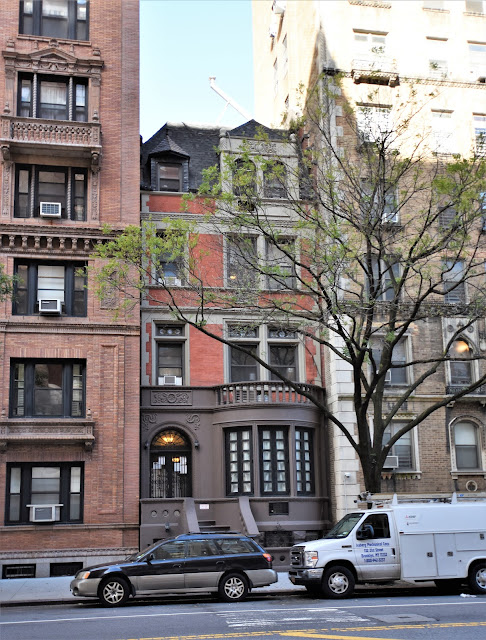 In 1887 construction began on a row of eight houses on the west side of West End Avenue, between 75th and 76th Streets.  It was an unusual arrangement of ownership among the developer, George B. Jacques and his architectural firm, Berg & Clark.  Possibly as part of the commission negotiation, Charles I. Berg and his partner Edward H. Clark each owned one property, and  Berg shared ownership with Jacques in one other.

The row was completed in 1888, a frenzy of shapes and styles.  No. 331, owned by Charles L. Berg, was a marriage of the Renaissance Revival and Queen Anne styles.  The 22-foot-wide residence cost $20,000 to build; more than half a million in today's dollars.  Red brick contrasted with the brownstone base, while limestone provided accents to the upper floor.  Two quirky, unrelated dormers, poked through the slate-shingled roof.  The elegant neo-Georgian fanlight above the entrance was defiantly out of character; fighting stylistically with, for instance, the colorful stained glass transoms of the upper floor windows.

The house caught the eye of the trustees of The New York Institute for the Instruction of the Deaf and Dumb.  Charles I. Berg personally gave the organization a $30,000 mortgage on the property.  Whether it ever moved in is unclear; but if so it was a short-lived arrangement.  On March 12, 1891 Berg and his wife, Ada, sold the house to millionaire Chester Williams Chapin for $50,000.

Chapin's father, Chester W. Chapin, Sr., President of the Boston and Albany Railroad, had died in 1883.  He left an estate of about $2 million (more than 25 times that amount today).  The Pacific Commercial Advertiser later explained "he left the bulk of his vast estate to his son, who had already made himself a millionaire and a power in the railway, steamship and financial worlds."

Indeed, Chapin had founded the New Haven Steamboat line, was president of the Connecticut Railroad and the Western Railroad, and had merged several others to form the Boston and Albany system.  In addition, he founded the Chapin Trust Company of Springfield, Massachusetts, the National Start Company, and was a director in many other corporations, banks and railroads.

Chapin had moved to New York City from Springfield in 1880.  He and his wife, the former Emelia Ward, had married in New Orleans in 1867.  It was a surprising match.  Although they were both 27, Emelia was a widow with three children.  Two more children, Julia and Pauline, would increase the family.

No. 331 West End Avenue was a fraction of the size of the Chapin mansion at No. 34 West 57th Street.  But the family never intended to live in it.  Instead Chapin purchased it for the use of his extended family when they visited New York.   Among those using the house from time to time was Chapin's married sister, Anna Rumrill, and his cousin Charles Henry Chapin, and their families.

The vast wealth of Chester and Emelia Chapin was summed up in two sentences in The Pacific Commercial Advertiser in 1906.  "They entertained extensively at their town house, No. 34 West Fifty-seventh street, just down the block from the Vanderbilts, Huntingtons and Oelrichses; their hospitalities at their many country places at Red Bank, Springfield, Montclair, Lebanon Lake and Tampa, and at their village at Aix-le-Bains, France, were notable.  There were notable cruises, too, on their yachts, Whim, Iroquois and Yampa."  Their Putnam County "farm" engulfed 2,000 acres.


On November 25, 1894 The New York Times remarked on the Chapins' Thanksgiving house party.  "Many guests have been invited to their Berkshire residence which is a spacious, old-fashioned mansion, and is always kept ready for occupancy.  The building is over 200 years old, and is delightfully arranged for house parties.  An interesting feature of the house is the ballroom, which occupies an entire floor, and has at either end an immense fireplace."

Quite possibly among the guests were Charles H. Chapin's three daughters, Louise, Annette, and Elizabeth (known as "Bessie").  They and their parents were repeated guests at the country estates and on long voyages on the Chapins' lavish yacht, the Yampa.  Chester Chapin was especially generous to his young Chicago nieces, since, as one newspaper put it, their "father had not been so well blessed with this world's goods as he."

As the Bessie and her sisters had grown to young women, they visited New York relatively often.  They stayed in the West End Avenue house, always with a chaperon, of course.  Their aunt Anna Rumrill often filled that position.

Chester's and Emelia's daughters married and left the Fifth Avenue mansion.  The Pacific Commercial Advertiser remarked "Instead of growing closer together as their children married and went away to homes of their own, Mr. and Mrs. Chapin gradually drifted apart, though married nearly forty years."  The newspaper added, somewhat cattily, "And it was then that the millionaire turned to his pretty cousin, winsome 'Bessie,' for companionship and sympathy."

Bessie spent less and less time in Chicago.  The Advertiser said "The summers found her practically mistress of the great estate at Lebanon Lake, with Mr. Chaplin's sister, Mrs. James A. Rumrill, as chaperon.  When she was in New York a house which Mr. Chapin has bought on West End avenue was always opened to her and her mother and sister."

There was no hint of scandal; no whispered words that Chapin and his young cousin were engaged in anything unseemly.   But in the first years of the 20th century "Mrs. Chapin had quietly dropped out of sight of her friends," according to one newspaper.  She quietly obtained a divorce and "was handsomely provided for."

Chester's affection for his cousin now blossomed.  Although he was 65-years-old, 40 years older than Bessie, and she had always called him "Uncle Chet," they were married in Chicago on November 22, 1905.  Following their honeymoon, which included a voyage to Hawaii, the newlyweds only briefly lived in the massive Fifth Avenue mansion.  On May 18, 1907 The Real Estate Record & Guide reported that Chapin had transferred the deed of No. 331 West End Avenue to his wife as "a gift."

Despite the initial surprise to society, the fall-spring marriage seems to have worked out well.  It weathered what could have been a significant bump on December 6, 1911 when Chester was served with a summons to appear "in a suit brought against him by a Mrs. Janet H. Phillips, a widow, living on the upper west side," reported The New York Times.

The newspaper said on January 3, 1912 "The nature of the action has not been determined because the complaint did not accompany the summons, but it is intimated that a 'package of letters' will play an important part in the suit, should it come to trial."  The implication was clear.

Chapin admitted to reporters that he had known Mrs. Phillips for 15 years; but "had not known her directly in the last seven years."  He charged that "it was only a desire to get money from him."

A journalist from The Times went directly to No. 331 to get answers.  "Mrs. Chapin was seen at her West End Avenue home yesterday afternoon," he reported on January 3.  "She appeared in a black riding habit."

Bessie dismissed the entire affair.  "I saw my husband only an hour ago, and he said nothing about it.  We have been married for six years, and I never heard of such a woman."  As she spoke, Chester showed up.  "Mr. Chapin returned from a drive, just then.  When a show of anger, he refused to say anything about the suit."

It is possible the Chapins avoided messy publicity, whether Janet Phillips had a real complaint or not, by paying her.  There was no subsequent trial.

Chester and Bessie were gone from New York for a prolonged period beginning in the summer of 1915, prompting them to lease No. 331 to R. M. Claussen.   Their departure may have been prompted by the noisy demolition of the neighboring houses to the south house that year.  By the time the couple returned the rowhouses had been replaced by a 12-story apartment building.

Bessie had, at the time, a somewhat unusual hobby for a woman of society--that of breeding pedigree cats. When the 15th annual Atlantic Cat Club opened "with a yowl," according to the The Evening World on November 22 the following year, the newspaper noted that Bessie was "one of the largest exhibitors.  She has almost a score of cats on display."

Following World War I the Chapins loaned their Putnam County estate to the Government for use as a convalescent camp for wounded soldiers and sailors.  Hundreds of returning veterans stayed there for months.

On November 11, 1922, at the age of 80, Chester W. Chapin died in the West End Avenue house.  In reporting on his death, The New York Herald remembered his active life. "Mr. Chapin formerly drove a fine team of horses in this city and was a leader in all horse shows and similar events.  He also hunted much in the Rocky Mountains and on the plains.  He was a licensed navigator and gave substantial support to yachting."

Chapin's will was filed for probate on November 21.  The New York Times reported that he left "an worth between $4,000,000 and $5,000,000."  In addition to securities worth $200,000 (just under $3 million today), Bessie received the West End Avenue house another on West 78th Street, the Sands Point, Long Island estate "Meadow Farm," and the country homes at Port Washington, Long Island and Pasadena, California.  The article added "She is given also the furniture, paintings, jewelry and personal and household effects."

She had held on to No 311 long enough to prevent its demolition when the other remaining Berg & Clark houses were demolished in 1925 for an Emery Roth-designed 15-story apartment building.  Now wedged between the modern structures, No 311 survived as a single-family home until 1986, when it was converted to two apartments per floor.  A subsequent renovation in 2000 added an unseen penthouse.