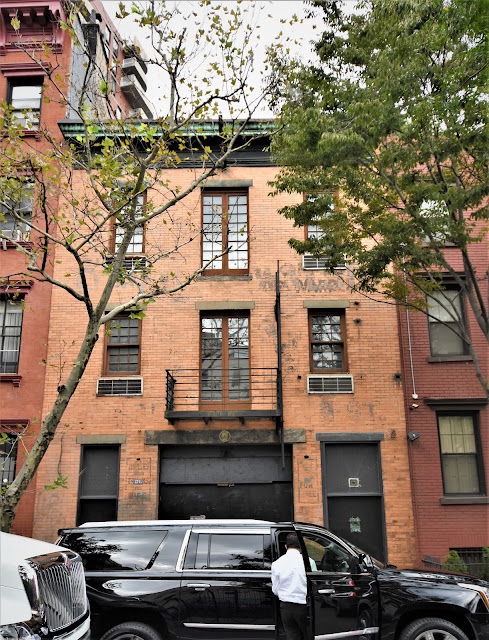 The old 27-foot wide building at No. 271 West 10th Street had housed multiple tenants for years when the Oneill estate sold it on January 13, 1911.  The Real Estate Record & Guide reported "The buyer, David Naugle, will erect on the site a 3-sty stable."  Negotiations for the sale had apparently been on-going, for two weeks earlier Naugle's architect, Charles H. Richter, had filed plans.  They called for a brick and concrete stable to cost $8,000, or around $213,000 today.

Naugle did not have to look far for a builder.  He was the principal in the David Naugle Construction Company.

Richter followed the routine design of stable buildings--a wide, centered carriage bay flanked by a doorway and window on the first floor, and central loft openings on the second and third floors for receiving bales of hay and other supplies.  In the yard behind the original building a small structure had stood, a small house or shop.  Now it held a manure pit, an odorous but necessary component of horse stables.  The stable's no-nonsense brick design included simple stone lintels and a wooden cornice and fascia board not unlike those on buildings of half a century earlier.

While some modern historians speculate that Naugle used the stable for his construction business, there is the possibility that it was instead a side business--a boarding stable.  The David Naugle Construction Company was at No. 67 Warren Street, significantly to the south, making the West 10th Street location inconveniently remote.

Horses on New York streets were all but gone on July 26, 1921 when the New-York Tribune announced that the David Naugle Construction Company had sold what was now described as a "three-story garage."    A month later the New York Herald finally named the buyer as David Walsh.

Walsh ran the D. Walsh Trucking & Rigging Corp.  Like Naugle, its business office was on Warren Street, but its main operations were at Nos. 704-706 Greenwich Street.  No. 271 West 10th would serve several purposes, including garaging some of the Walsh trucks.  Following renovations, Walsh's painted advertisements on the brickwork offered "Horses and Trucks to Hire" and "Gasoline For Sale." 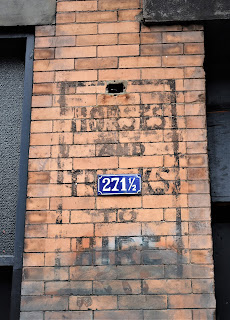 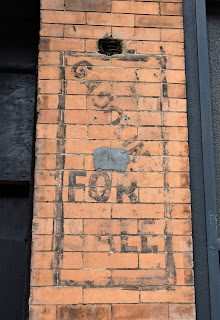 Walsh's renovations resulted in what the Department of Buildings deemed a "3 story Garage & Stable."  The ground floor was used for the storage of "four motor trucks," and the upper two floors were for "stable" purposes.  Walsh used No. 271 for those purposes until 1935, when he leased it.   In 1941 it was home to the York Storage Warehouse and later to the A. Lindenbaum Trucking company.

The A. Lindenbaum Trucking company moved out around 1966.  The building was unofficially converted to studio and living spaces.  Hans Van de Bovenkamp was here at least by 1968.  Born in Garderen, Holland in 1938, he had moved to New York City following his graduation from the University of Michigan in 1961.  He would be integral in what was termed the 10th Street Gallery Co-op movement.  (It was a collective term for co-operative galleries operating mostly in the East Village, run with little or no staff on nearly non-existent budgets.)

Van de Bovenkamp's modern sculptures were not well-received by The New York Times art critic John Canaday.  He stopped by No. 271 in April 1968 to see the artist's limited edition fountain sculptures.  He  reported "Most of these ill-designed, ill-made sculptures in sheet metal seem planned to disfigure pools.  The studio is kooky-cute, what with a faceless clock ticking away, a barber's chair in the modified conversation pit, and other arch oddments."

Canaday got another shot at Van de Bovenkamp that month when he reviewed a show by ten artists on April 28.  He said in part "The sculpture of Roger Jorgensen, Julius Tobias and Charles Ginnever I thought was as distinguished as that of Hans ven de Bovenkamp was tacky."

In the end Van de Bovenkamp prevailed.  His large scale metal sculptures have won numerous awards and have been exhibited world-wide. 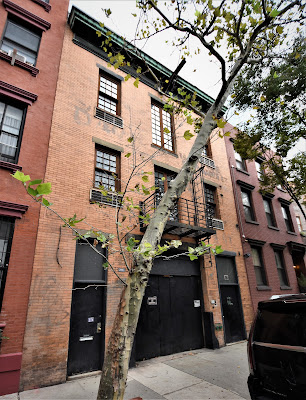 Sharing the old stable building with Van de Bovenkamp was Bill Barrett, an artist whose focus was also on abstract sculpture executed in steel, bronze and aluminum.   Four years younger than Van de Bovenkamp, he too had graduated from the University of Michigan.  He would go on to include painting and jewelry design to his artwork.

Wise, it seems, rethought the potential of the structure and two years later initiated another conversion.  This one resulted in a single-car garage and an apartment on the ground floor.  A duplex "apartment and studio" on the upper floors shared the second floor with one smaller apartment--resulting in a total of three apartments in the building.

In an April 27, 1968 article Grace Glueck of The New York Times reported on an art show by the "10 Downtown" artists.  Bill Barrett had exhibited in that show, as did Eugene Tulchin.  By 1996 Tulchin was an associate professor of art at Cooper Union.   That year he purchased No. 271 from Stephanie Wise.  An enamel plaque over the bay doors suggests the two had already operated a gallery form the garage area, although it does not appear anywhere in print. 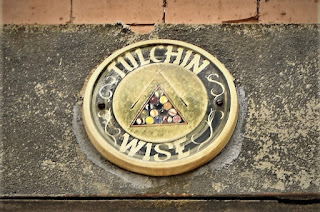 Tulchin's purchase triggered a rapid-fire turnover in ownership.  He sold it two years later to actor Wesley Trent Snipes, who filed plans to convert it to a single family residence; but changed his mind.  He withdrew them in 1999 and sold the property within the year.

The century of neighborhood change was graphically evidenced when No. 271 was purchased for just under $15 million in 2005.  Within months plans, approved by the Landmarks Preservation Commission, were filed with the Department of Buildings to convert it to a private residence.