Perhaps no one was more involved in Greenwich Village's building boom of the 1820's than Charles Oakley.  He constructed dozens of houses and shops, including a row of four Late Federal-style homes at Nos. 9 through 15 Commerce Street in 1826.  Two and a half stories tall and 21-feet wide, they featured brownstone stoops above English basements and graceful but unpretentious decorative details.

The openings wore simple brownstone sills and lintels.  The entrance of No. 15 featured paneled pilasters and narrow sidelights.  One or two dormers would have originally pierced the slightly-peaked roof.

Susan Henshaw lived at No. 15 by 1834.  The widow of William H. Henshaw, she would be the first of several widows to occupy the house.   She died on February 25, 1844 at the age of 75.  Interestingly, there was no mention in local newspapers of a funeral.  Instead, the New-York Daily Tribune said only "Her remains will be taken to Greenwood Cemetery for interment this (Tuesday) afternoon at 3 o'clock, from her late residence No. 15 Commerce street."

The next occupant was William F. Godfrey.  A city employee, he had the title of Superintendent of Carts.  He was, as well, highly involved in local politics and in 1853 was chairman of the 9th Ward 22nd Council District.  He held a meeting in the house on October 19 that year to nominate Aaron L. Deveau for the office of district councilman.

It was probably the last gathering in the Godfrey parlors.  A week earlier he had placed an advertisement in The New York Herald that read "A piano for sale--A very fine toned instrument, 6-3/4 octaves compass, rosewood case, with round corners, almost new."  The ad explained that the owner was moving and asked $175 for the instrument.  It hinted at the Godfreys' high-end furnishings, the price equal to about $5,730 today.

Another widow moved into No. 15.  As was common, she garnered extra money by renting out a room.  On June 28, 1859 she advertised "A young American widow, without family, will let a furnished room to a gentleman and lady, without board or with board for lady only, or would accommodate one young lady."

It would appear her tenant opted for board, because three months later an advertisement sought "An intelligent Protestant woman (widow preferred) to do the general housework" and stressed the applicant "must be a good plain cook and first rate washer."  Meals were the only amenity the boarder would received.  The ad mentioned that the applicant would have "only one to wash for."

In March 1861 she was looking for a new boarder.  "A young American widow, living alone and having more room than she requires, would let one Room or a Parlor and Bedroom, with breakfast if desired.  House neat and location convenient."

Whether the young widow remarried soon after that ad, or if the house was rented to Louise Mortimer is unclear.  In either case the Civil War would upend her domestic stability after her husband went off to fight, ending her income.  She looked for a job in January 1862 as she prepared to give up the Commerce Street house.

"A lady, who is about breaking up housekeeping and whose husband is at the seat of war, would like to procure a situation as housekeeper in a gentleman's family; widower or bachelor preferred."

A subsequent advertisement only three months later revealed that Louise had received tragic news.  "House wanted by a widow, without children."

Around the end of the war the house was procured by real estate operator John McClelland.   Following his death his estate sold the property on April 3, 1875 to Dominick Neusch.  He paid the equivalent of $132,000 today.  Exactly one week later he filed plans to alter the dwelling.

The Real Estate Record & Builders' Guide reported on April 10 that he had hired builders Steel & McLaughlin to add a full third story to the house.  The alterations cost him $650, or about $15,000 today.  The seamless addition copied the lower openings and featured an up-to-date Italianate cornice.

It may have been that John Laird was leasing the house when Neusch purchased it.  In any event, his family was living here on April 17, 1876 when his widowed mother died.  Her funeral was held in the house two days later.

Before long, however, the Neusch family had moved in, including daughters Magdalena and Emma.  Dominick Neusch died in the house on New Year's Day, 1904 at the age of 77.  The house was left to his unmarried daughters.  Magdalena and Emma were still living here at late as 1917.

By the early 1920's Anthony DeVola leased the house from the Neusch family.  In March 1922 he rented a room to Salatil S. Gupge.  The 29-year old had left his native India about eight years earlier to pursue his education.  He had been studying at the University of Illinois in Urbana.

The New York Times would later remark "Gupge, always well dressed and polished of manner, became a part of the home life of the DeVola's.  Much of his time he spent in his room perusing books of a philosophical and religious nature.  He seldom sought the companionship of women, though he was courteous and conversational whenever he came in contact with them."

Gupge's father. Sirnker Sitarus, was chief engineer in the town of Kholatur, near Bombay.  The family was "distinguished" in the community.  Gupge did not take his father's surname according to Hindu custom.

At around 11 on the morning of July 30, 1922, Gupge had not come down for breakfast.  DeVola went to check on him and smelled gas while going up the stairs.  The Times reported "His knock failed to bring a reply.  DeVola broke in the door and found the young student fully clothed on the bed, with the windows closed and two gas jets open."

DeVola turned off the gas and opened the windows, and then tried to rouse Gupge while his son ran for a policeman.  When an ambulance from St. Vincent's Hospital arrived, Gupge was pronounced dead.

Newspapers continually described Gupge as a "Hindu" and The New York Herald went even further by saying "a Hindu student of motion picture photography was found dead in bed yesterday in his room in a Hindu rooming house at 15 Commerce street."

An Urbana, Illinois newspaper was not glowing in its recollections of the dead man.  "He was not a brilliant scholar, but was considered a 'plodder,' somewhat handicapped by his lack of knowledge of this country.  There was nothing in his career here out of the ordinary.  He was not known to have any women friends and had very few friends among the male students."

A number of sealed letters, apparently written just before his death, were turned over to the police, who deemed it a suicide.  Others were not so sure.  The New York Herald reported "Anthony De Vala [sic]...and Hindu friends of the dead man expressed the belief that it was an accident, as the jet was not turned on fully."

The Commerce Street block saw an unusual amount of foot traffic the following day.  The New York Times reported on July 31, "The prominence of Gupge...among his own people was attested by the number of Hindu residents of the city who filed into the rooming house throughout the day and discussed the young man's death."

The last of the Neusch descendants to own No. 15 were Mrs. Beulah R. Morse and Mrs. Ida C. Nehb.  On May 13, 1946 The Times reported "A dwelling in Greenwich Village that had been in the family of the sellers for seventy-two years passed to new hands."  The women had sold it in an all-cash deal to "an investor."

Other than updating the plumbing that year, the new owner did not make any significant changes to the old house.  One of the two renovations in 1953 and 1968 included the stuccoing of the facade.  A gut renovation was begun in 2013 which resulted in what a realtor calls "a stylish, light and open plan."  No trace of the historic interiors remain. 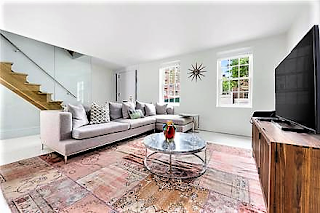