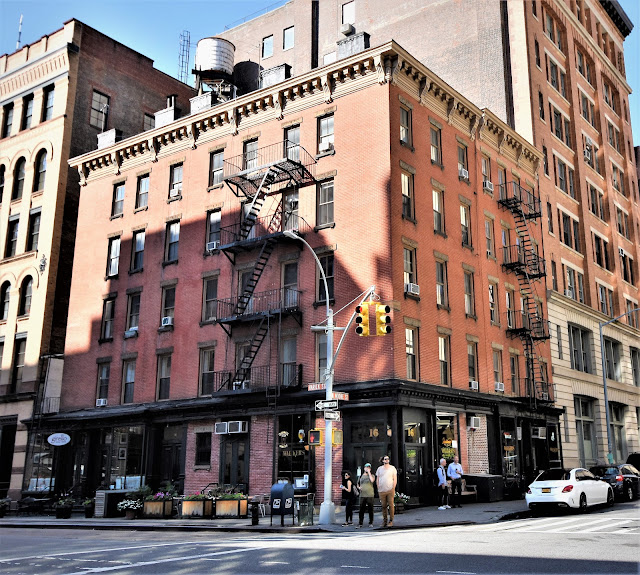 For years James P. Wilson's saloon had stood on the southwest corner of Varick and North Moore Streets.  In 1878, after he was appointed a deputy sheriff, Wilson sold the business to a man named Conroy; although he continued on as bartender.  Conroy's new venture would not last long at all.  In 1879 developer Albert Block acquired the corner and hired architect Frederick W. Klempt to replace it with a tenement and store.

Klempt filed plans in March 1880 for a "five-story brick tenement" to cost $16,500--or about $408,000 today.  Largely forgotten, Klempt was busy at the time, mostly designing tenement buildings throughout the city.  The structure he designed for Block at No. 16 North Moore Street was typical of his work.  Twenty-five feet wide on North Moore, it stretched 75 feet south along Varick.   The four upper floors were faced in red brick, their sandstone lintels decorated with incised floral designs, typical of the neo-Grec style.  A rigidly geometric iron cornice carried on the style.

The ground floor held two storefronts under a continuous cornice.  The northern space seems to have been designed as a saloon, operated by Edward G. Schroeder, from the beginning.  A cast iron column fronted the angled doorway.  Both storefronts featured wood-framed, projecting shop windows.


Interestingly, following Albert Block's death, his sons John P., Richard W., and Edward Block, did not inherit the property, but purchased it from the estate.  The three men paid $45,000 for the building on October 15, 1886; a considerable $1.2 million today.

In the meantime, middle-class tenants lived in the upper floors, coming and going through the entrance at No. 11 Varick.  Among them was former policeman John Hamblin.  He had retired from the force on September 29, 1868 and lived here on his $300 per year pension (about $8,400 today).  He would remain in the building for several years, most likely until his death.

Druggist Robert Ray and his wife, Margaret, had domestic problems in the winter of 1889.   For whatever reason, Margaret, who was 25 years old, was convinced her husband intended to murder her.   If so, he would have had easy access to the means to do so.   Murders and suicides in the 1880's and '90's routinely involved substances like carbolic acid or Paris green, easily purchased at drugstores.

At 3:00 on the morning of February 18, Margaret ran out of the building in her bare feet, "while laboring under the delusion that some persons were trying to poison her," reported The Evening World.  A policeman "found it necessary to take her in charge," not because she needed protection, but because she was hysterical.

In 1889 it was not easy for a woman to convince officials that it was her husband, not she, who was the culprit.  "At the Jefferson Market [courthouse] she told Justice Duffy that her husband wanted to get rid of her, and that she was not insane."   It does not appear that investigators went to the North Moore Street apartment.  Instead Margaret "was committed to examination as to her sanity."

In July 1890 36-year-old Charles N. Brunie took over the lease of the saloon from Edward Schroeder.  The German-born Brunie was already well-known as a saloon proprietor, having operated the upscale bar in the Northwich Hotel since 1879.  A Souvenir of New York's Liquor Interests described that saloon in 1893 saying it was "elegant in all [its] appointments, being fitted up with solid black walnut fixtures, heavy plate glass mirrors, artistically decorated walls and ceiling and all the latest improvements."

The booklet noted "Mr. Brunie's trade had so increased that he found it necessary to supply additional accommodations for his customers and he opened a branch store at the corner of Varick and North Moore Streets.  This is neatly and attractively fitted up and enjoys a large and high-class patronage."  (Considering the industrial neighborhood around the New York Central and Hudson River Railroad's freight yards, one wonders exactly how "high-class" Brunie's patronage here was.)

Brunie had a close call on June 20, 1893 when the train he was aboard, returning from the races at Sheepshead Bay, derailed.  Seven passengers were killed and among the 18 injured was Brunie.

When Richard and Edward Block decided to build another tenement next door, they instructed architect George F. Pelham to nearly duplicate No. 16.  The close match was slightly out of date architecturally, but created a visually appealing composition.

While most of the tenants lived quietly, eking a living through low-level jobs; some were victims of tragic accidents.  On Saturday, September 5, 1896 August Creger attempted to fill his rare spare time by renting an 18-foot fishing boat and heading into the Hudson River.  Later a severe storm struck.  Two days later The New York Times reported "He has not been seen since.  The boat, split from stem to stern, was found by harbor police in the North River yesterday."

Charles Jaeger worked in the nearby freight yards.  The 54-year old was at work on the night of September 2, 1898 when disaster struck.  The Times reported "He was standing on the tracks weighing freight when a car backed up and he was caught between it and a car standing on the track."  He was crushed to death.

With no playgrounds and no parks nearby, the children of No. 11 Varick Street played in the streets.  Eight-year-old Anna Morrisey joined a large group of children playing games on Thanksgiving Day, 1914.  While they frolicked, a vicious dog was menacing passengers attempting to board the Barclay Street Ferry, several blocks to the south.  The Times reported "A policeman chased it up West Street and realizing that the animal was a menace, telephone to the Beach Street Station."

Two policemen were sent out to find the mad dog.  They found it at Varick and Franklin Streets--too late to prevent chaos.  "The youngsters tried to get of out of the way, but the animal sprang into the group," said the article.  Screaming children scattered, but the dog repeatedly bit them.  When 8-year-old Teyo Croco received a bite on his hand, his brother Victor tried to rescue him.  He too was bitten.  Anna Morrissy was one of the six who were attended to by a doctor from the Hudson Street Hospital.

The dog was cornered by the policemen in front of No. 40 Hudson Street and shot.  The Board of Health was notified regarding the presumably rabid animal.

The saloon had been taken over from Charles Brunie in 1906 by Ernest W. Fick.  But the enactment of Prohibition put an end to that business.  In 1920 the space was converted to the office of the Blue Line Motor Freight line; and by 1933 it was home to the Johnn'y Express company.

The struggles of the tenants was exemplified by young Raymond Tassaro in 1922.  The 12-year-old's mother was a widow and there were several other children in the family.  To help support them, he ran a newsstand after street across the street, at Franklin and Varick Streets.

Saturday January 7 was a frigid day and Raymond started to build a fire at the edge of the sidewalk to keep warm.  He most likely never saw the H. J. Heinz delivery truck backing up to the curb.  The rear wheel crushed and fatally injured the boy.  The driver was arrested on a technical charge of homicide.

Almost immediately after the repeal of Prohibition the ground floor once again became a bar.  The Tribeca neighborhood was still gritty through the 1970's.  Among the upstairs tenants in 1971 was Don D. Dumas.  The 41-year old accountant had done temporary work for the Parks, Recreation and Cultural Affairs Administration.  On June 3 that year he was arrested on charges of forgery, grand larceny and the cashing of forged checks.

At the time the tenant list had undergone a peculiar transformation.  In January 1973 The New York Times noted "The building, which has a bar and grill on the ground floor, is occupied mainly by single men."  Those men were, according to police, mostly homosexuals.

Donald MacNiven was 40-years old and his next-door neighbor, John Beardsley, was 53.  Both had lived in their fifth floor apartments here for about a decade.  When fire fighters responded to a fire in MacNiven's two-room apartment on January 8, 1973, they found both men dead on the living room floor.

The fire was described as "suspicious" and both MacNiven and Beardsley had multiple stab wounds.  A neighbor, Stewart Hieghton, told investigators that he was awakened around 6:00 that morning "by sounds of scuffling."  But after listening for a few minutes, he went back to sleep.  An hour later he smelled smoke and notified the landlord, who called the Fire Department.

The police description of MacNiven's apartment is evidence that the Tribeca renaissance had not yet arrived here.  According to The New York Times it "was sparely furnished.  There was a mattress on the floor and no bed.  Books and magazines were strewn around the living room."

The attacks soon appeared to be just the beginning of a reign of terror.  Days later another gay man, Ronald Cabo, was found stabbed to death in his Thompson Street apartment.   And then on January 19, 1973 The Times reported "The discovery of the bodies of two young men floating in the Hudson River off Greenwich Village added yesterday to the fears of the homosexual community, already stunned by the three recent murders of homosexuals in the area."

The rediscovery of Tribeca eventually did arrive at the corner of Varick and North Moore Streets.  By the early 1990's Walker's, a trendy watering hole opened in the former saloon space; and upstairs today there is a total of just eight apartments.  While the ground floor has undergone significant change, the upper floors appear much as they did when Margaret Ray feared for her life in 1889.