Unexpected: A District Attorney, a Gourmet and a Spy - 391 West Street 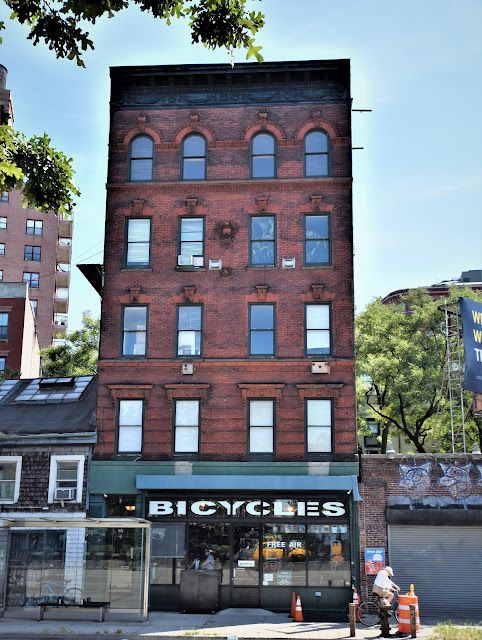 Men's apparel merchant Solomon Lent dabbled in real estate at the turn of the last century.  He bought and sold properties, mostly on the west side of Manhattan.   When he purchased the two-story store at Nos. 391 West Street and the house directly behind at No. 8 Weehawken Street on February 4, 1902, however, he had another purpose in mind.   (The venerable buildings were originally a single structure, part of the wooden Greenwich Market House, built in 1834.)

The tiny block was only 28 feet deep--exactly the width of the properties--relatively a sliver of a normal city block.  Despite the sketchy riverfront neighborhood, Lent paid the equivalent of $325,000 for the property.  He then put Prussian-born architect Richard Rohl to work designing a store and tenement building to replace the old structures.

Completed within the year, the five-story building was faced in red brick.  The West Street facade was ornamented with terra cotta, its neo-Renaissance design presenting a handsome presence on the thoroughfare.  The Weehawken elevation, where the tenement residents entered, was left undecorated and factory-like.

Lent may have anticipated similar development along the block.  That never happened and the Lent building towers above its two- and three-story neighbors even today.  At one point it held the neighborhood nickname of "the Skyscraper of the West Side."  The street level store was home to the Lent men's furnishings store, run by Solomon and his son, Milton.  The shop would have catered to the longshoremen, sailors and other workers along the riverfront.

It appears that Lent considered selling No. 391 in June 1908.  The Real Estate Record & Guide announced he had given a $14,000 mortgage to Edward E. Black; but that deal fell through and the Lent family would hold title to the building for decades.  The family's men's store continued through 1922.

As blue collar tenants came and went through the back door over the years, one in particular stood out.  Unlike his neighbors, Frederick A. Sperling was a lawyer and on New Year's Day 1931 District Attorney Thomas C. T. Crain announced he had appointed Sperling as Assistant District Attorney.

Sperling started out with unremarkable cases, like his prosecution of attorney Benjamin Weissman in July that year.  Weissman was accused of cheating a client.  He had represented shoemaker August Sardo in a suit against the Interborough Rapid Transit Company after his son was injured.  Weissman settled the claim for $1,350, but gave his client only $50.

Before long, however, Sperling was making a name for himself in high-profile cases.  In 1933, for instance, he led the charge against union-run "rackets," and in June 1934 he represented the people against ten Communists, accused with rioting and attacking police with nail-studded clubs.

Another surprising resident was John (known as Jack) Van Bibber--an amateur chef, cookbook author and literary agent.  He moved into a second floor apartment in the late 1940's.  The young bachelor had a mural painted on a dining room wall for which he paid $50.  He later described it as "an awful mural with columns designed from every known style of architecture and Cuban ladies in Empress Eugénie hairdos."  As his success and subsequent finances increased, he filled the apartment with art and antique furniture.

With the repeal of Prohibition, the former clothing store was converted to a tavern, the Glascow Bar & Grill.  A bar would remain in the space until 1960.

In the meantime, in 1948, Alger Hiss, president of the Carnegie Endowment for International Peace  had made headlines across the country.  Hiss had been highly involved in the establishment of the United Nations, had been both a U. S. State Department official and a United Nations official.  But now he was accused by the infamous House Committee on Un-American Activities of being a Soviet spy.

Although he maintained his innocence until his death and the charges were never fully substantiated, Hiss received two concurrent five-year sentences.  He served three and a half years.

On February 17, 1959 The New York Times reported that Hiss and his wife, Priscilla, were separating after the 30 years of marriage.  Alger moved out and into an apartment at No. 391 West Street.  His troubles continued here.

On May 14, 1960 police reported "that the apartment of Alger Hiss on the lower West Side waterfront had been ransacked."  The Times described the building as "crumbling" and reminded readers that "Mr. Hiss, who is 55 years old, served a prison term for perjury after denying that he had passed confidential paper to Communist couriers in the Nineteen Thirties while he was a State Department official."

The disarray of the apartment was disproportionate to the items taken--a $30 gold ring and a $5 pair of cuff links.  The police told reporters "there was no indication whether the motive was burglary or other reasons"

In 1967 the Lent family sold No. 391 to a most unlikely buyer--long time resident Jack Van Bibber.  He was lesser known to Greenwich Village residents for his culinary and literary work than for his outspoken push-back against Robert Moses's proposed Lower Manhattan Crosstown Expressway.    The project would have connected the Holland Tunnel with the Williamsburg and Manhattan Bridges.

The New York Times food critic Craig Claiborne had visited the Van Bibber apartments (there were two by now) in January 1967, the same year he purchased the building.  Claiborne dismissed Van Bibber's harsh critique of his dining room mural.  "The truth of the matter is that the mural, done in pastel tones, has a good deal of charm."

Claiborne described the spaces where "the 45-year-old bachelor frequently whips up buffets for 20, occasional cocktails for 50 and formal dinners for six to eight."  In addition, he wrote, "there is a large living and dining area in his second apartment, two flights below the first  It is decorated with art collected both in this country and abroad, pre-Columbia art from Mexico and last year's Christmas tree.  He also has a summer house on Fire Island."

The writer was no less unkind to No. 391 than his newspaper had been seven years earlier.  "Mr. Van Bibber's apartment faces Pier 48, in a five story building with a dilapidated front."  At the time of the article Van Bibber had recently translated an Italian encyclopedia of cooking; and was at work translating a cookbook by Raymond Oliver, the proprietor of the Paris restaurant Grand Vefour.

The building was purchased in 1996 by Eight Weehawken LLC.  By then the once-gritty waterfront was noticeably changing.   Upscale high-rise apartment buildings and trendy restaurants and boutique hotels would soon pop up along the blocks to the north and south.  Today the Waterfront Bike Shop operates from the shop where longshoremen purchased work clothes from Solomon Lent.

Craig Claiborne had begun his 1967 article saying "Jack Van Bibber lives in a tenement."  Today that description no longer applies  A two-bedroom apartment here recently rented for $3,800 per month; the real estate agent boasting "it is located on the 4th floor of a walk-up building but is worth every step."