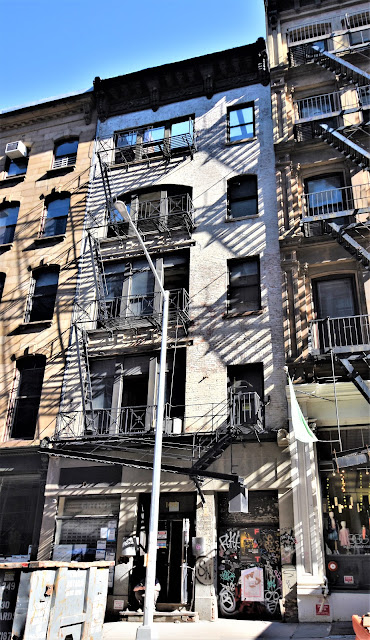 By the 1830’s the block of Franklin Street between Church Street and West Broadway was lined with handsome Federal-style residences.  No. 106 reflected the fashionable nature of the neighborhood.  Faced in brick it rose three full stories to a pitched roof with prominent dormers.  At 25-feet wide, it was on par with the homes of the city’s most prominent citizens.  The upscale tone of the home was also evidenced by its resident, the Episcopal Bishop of New York.


Benjamin Treadwell Onderdonk was born on July 15, 1791.  After graduating from Columbia College he studied theology under Bishop John Henry Hobart, eventually succeeding him as Bishop in 1830.  Onderdonk and his wife, the former Eliza Handy, had two children, Elizabeth Caroline and William Handy Onderdonk.

Although grown, both Caroline and William were living with their parents in 1844 when the family looked for a summer place.  The Onderdonks, like all well-to-do families, left the city in the warm months for the country.  With their parishioners out of town, most fashionable churches closed for three months.  On March 26 William placed two advertisements in the New-York Daily Tribune.

The first offered the Franklin Street house for lease:  “To let—The three story basement House No. 106 Franklin st.  Two parlor pier glasses, a Nott’s stove for the hall, and an entry oil cloth will be let with the house.”  (The two parlor pier mirrors were a clear indication of the upscale furnishings.)

The second ad read: “Country Residence—Wanted, a large and commodious dwelling house situated in a healthy part of the State, near an Episcopal Church, and of convenient access to the city.”

At the time scandal rocked the Episcopal community and it centered on Bishop Onderdonk.  When a candidate for the ministry, Arthur Carey, was interviewed by Rev. Dr. Hugh Smith of St. Peter’s Church, he expressed views sympathetic to Roman Catholicism.  It was a serious matter in 1843—Roman Catholics were called "Papists" (and worse).  Rev. Smith called for an inquiry by Bishop Onderdonk.

When Onderdonk deemed Carey suitable for ordination a backlash erupted.  Now the Bishop too was accused of pro-Catholic sentiments.  During the uproar, the Bishop of Virginia, William Meade, suddenly produced a number of affidavits from women who alleged Onderdonk had “engaged in improper touching” and had made inappropriate advances.   (It was an astonishingly early precursor to today's #MeToo movement.)

Onderdonk fought the charges valiantly; proposing that the women were paid to make the charges so his enemies could get rid of him.  But a resulting trial before the House of Bishops ended in Onderdonk’s suspension.  While he retained his position—at least in title—he was unable to celebrate mass or any other of his priestly duties.

Further tragedy came to the family when Elizabeth died at the age of 37 on Saturday morning, May 14, 1853.  Her funeral was held in the parlor of the house on Franklin Street two days later.

Although he was no longer able to perform his duties, Onderdonk and his family continued to live quite comfortably in their fine home.  On September 1, 1854 an advertisement in The New York Herald sought a new servant.  “Cook Wanted—To go a short distance in the country.  She must understand milking, baking, washing and ironing, and come well recommended.”  The notice reveals that the family still maintained a country home.

Bishop Benjamin Onderdonk died on April 30, 1861.  Despite more than a decade of public humiliation, he received full honors at his Trinity Church funeral.  The interior of the church was draped in black and several hundred clergymen attended the service.  His body lies today within a stone sarcophagus in Trinity Church that depicts him lying with his foot crushing a serpent labeled “Scandal.” 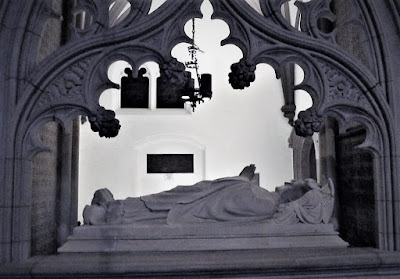 The property was purchased by Hugh Doherty.  Rather than demolish the old house, he altered it to a store and loft building.  The renovations were completed before 1868, resulting in an up-to-date Italianate-style structure.  In April 1868 he advertised “To Let—A First Class Loft, suitable for the fancy goods trade; terms moderate.”  And two months later an advertisement offered “To Let—A fine office, with room for sample counter, at a moderate rent.”

Among the first tenants was Fairbanks & Martin, dry goods merchants.  And in 1872 the newly-formed R. D. Wood & Sons moved in.  Originally an iron dealer, firm would totally remake itself before the end of the century.

One employee of Fairbanks & Martin in 1873 stepped off his commuter train before realizing he had left his important papers on the seat.  He placed an advertisement in The New York Herald on September 20 offering “$10 Reward will be paid to any person returning a Letter Case, with contents of papers and memoranda, lost by the subscriber on the Stongington line Wednesday night.”  The papers were apparently important, for the reward R. Hazard offered would be more than $210 today.

The South was devastated by a yellow fever epidemic that year.  On October 10 The New York Herald reported that a fifth priest had died after administering last rights to the sick and that 39 victims had died in Memphis alone the previous Wednesday.  Fairbanks & Martin donated $25 to the relief effort (about $525 today).

Fairbanks & Martin moved to 78 Franklin Street the following year.  In their place Giffin & Wilde, commission merchants moved in.   The firm, headed by Charles H. Giffin, Jr. and Charles E. Wilde, remained in the building until its bankruptcy in 1879.

The estate of Hugh Doherty sold 106 Franklin to Samuel H. Frisbee in January 1881.  Described in the sale documents as a “five story brick store,” it sold for about $908,000 in today’s dollars.  Just over four years later, in August 1885, real estate operator Thomas S. Clarkson purchased it for the equivalent of $1.45 million today.

Clarkson hired the architectural firm of W. A. & F. E. Conover to renovate the structure.  Their plans, filed in February 1888 called for “front alterations.”  A new storefront and, most likely at this time, the broad openings with their metal lintels decorated with rosettes were included in the renovations. 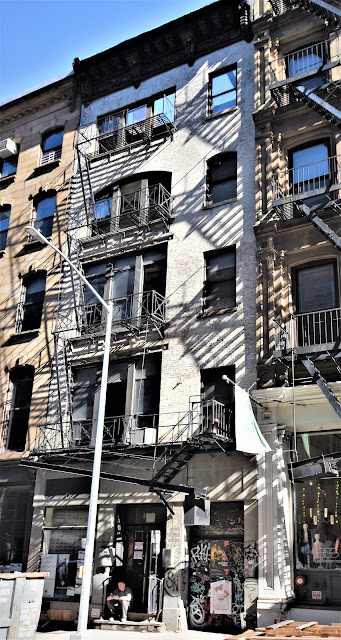 By now R. D. Wood & Sons had become George Wood, Sons & Co. and no longer dealt in iron, but in textiles.  The firm operated a cotton mill and the Millville Manufacturing Company in Millville, New Jersey.

As other tenants came and went, the firm stayed on.  The broad array of textiles it handled was evidenced in the 1913 American Trade Index, which listed “Sateens, cambrics, linings, buntings, silesias, long cloths, crashes, diapers, napkins, [and] towelings.”  During World War I the firm landed lucrative contracts with the Government, supplying the United States Marine Corps with towels.

During the Great Depression, the Government once again purchased from George Wood, Sons & Co.  On November 21, 1935 The New York Times reported the firm had bid on “cotton huck towels” for the Army, and 394,652 yards of cotton linings, felt and padding “to be used in the army clothing factory.”

George Wood, Sons & Co. stayed on at 106 Franklin Street through mid-century.  In the 1980’s the Tribeca renaissance was transforming the once gritty neighborhood as galleries, restaurants and trendy shops replaced the old factories.  By 1983 Calligraphy Studios leased space in the building, providing the meticulous hand-lettering necessary for upscale place cards and invitations.   Its services were recommended by Tiffany & Co.’s stationery department.

In 2000 Bu and the Duck offered its own baby items to shoppers —clothing, toys and accessories.  And in August 2012 the six-year old handbag line known as Gryson opened a boutique here.  The Times said the shop, “decorated with steel pipes and brass lighting fixtures, reflects the downtown aesthetic of the label and stocks pieces like suede tote bags [priced at] $695.”

Pedestrians passing by 106 Franklin Street today could have no idea that industrial building started life as a luxurious home.  The most astute of observers, however, might notice a nearly hidden clue at the second floor.  The Flemish bond brickwork is original to the 1840’s residence of one of New York City’s earliest Episcopal Bishops.