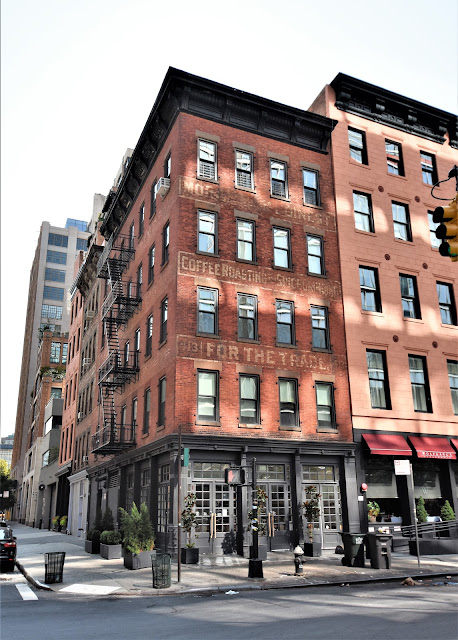 As late as 1883 J. A. Pilkington operated his saloon from the old two-and-a-half story converted house on the southeast corner of Greenwich and Hubert Streets.  But the Tribeca neighborhood had been undergoing change for two decades and that Federal-style house was soon to go.

On February 16, 1889 Architecture & Building reported that A. A. Shaw had hired architect William B. Pope to replace the vintage structure with a five-story "brick store" to cost $25,000--just under $690,000 today.  Shaw was a minor operator in real estate circles, his name only occasionally appearing in the journals.

Completed later that same year, No. 413 Greenwich Street was unapologetically utilitarian.  Pope spent no unnecessary money on embellishments and focused on the functionality of his structure.  Nevertheless, the cast iron storefront, the dignified bracketed cornice and the contrast of red brick and stone created an attractive building.

Shaw put the title of the property into his wife's name.  So when renovations were necessary in September 1890, only a few months after the building was completed, the plans listed "Mrs. A. A. Shaw" as owner.  Pope was brought to install "new elevator shaft, elevator, and boiler."  It was a pricey upgrade--more than $97,000 today.

No. 413 got an unglamorous start.  For about a decade it was used as a carpet storage facility.  Next door at Nos. 407-411 was the W. & J. Sloane Company, one of the country's preeminent carpet manufacturers.

That all changed in 1901 when William J. Morrison and Walter B. Boinest formed the Morrison & Boinest Co.  The pair had been employed for years by Frederick Akers, the proprietor of New York's oldest and best known coffee roasting establishment.  Following Akers' death that year, they formed the new company to carry on the same type of business.

Morrison & Boinest Co. roasted imported coffee beans, and ground spices.  Interestingly, it did not involve itself in merchandising the products, providing the service instead for other firms.  A 1904 advertisement noted boldly "We Do Not Buy," "We Do Not Sell" The ad stressed "We Do Not Compete With Our Customers" adding "We Roast Coffee for the Trade Only." 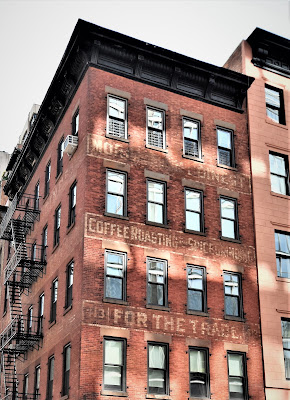 As was customary in the early 20th century, the building's facade became a billboard of sorts.  Signage was painted across the brickwork that announced "Morrison & Boinest," "Coffee Roasting and Spice Grinding," and "For The Trade."  Ghosts of the signage survives.

The presence of moisture could have devastating consequences to freshly-ground coffee and spices.  In 1911 Morrison & Boinest had the "coffee warehouse" waterproofed by The Bitu-Mortar Company, manufacturers of "cement waterproofing."

It was not water, but fire that threatened the building in 1913.  At around 9:35 p.m. on February 10 fire was discovered on the third floor.  Before it was extinguished the firm suffered nearly $77,000 in losses by today's standards.

Four months later Walter B. Boinest resigned.  The industry journal Simmons' Spice Mill reported "On July 1 the partnership between Wm. J. Morrison and Walter B. Boinest, as Morrison &  Boinest, coffee roasters for the trade, 413 Greenwich St., New York, was dissolved by mutual consent, and the business is continued by Mr. Boinest under the old name."

The article explained that Boinest had stepped down "upon the advise of his physician.  He has been in poor health for fully a year."  Its writer added that Boinest was "one of the best liked men in the New York coffee business."

Although its clients probably saw no immediate change following Boinest's departure; William Morrison began to branch out.  He took on two new partners in 1916, M. W. Brown and J. A. Flagg, and incorporated as Morrison-Boinest Co., Inc.  The firm was now described as "planters, merchants and brokers in coffee, tea, cocoa, etc."  (Despite the legal name-change, the firm continued to operate as Morrison & Boinest Co.)

In the decades before sexual discrimination was an issue, Morrison & Boinest Co. hired only females in its packing department.  An advertisement on September 28, 1918 sought "Girls for Packing Coffee: Experience not necessary.  Hours 8 to 5; $10 start; half day Saturday."  The starting wages would be about $163 a week today.

Retirement apparently did not suit Walter B. Boinest.  The Iron Age announced on May 13, 1920 that he had partnered with P. J. Moe and K. Kiely to form The Dalyte Lamp Co. "to manufacture electric lamps, fixtures, etc."  The firm now shared space with Boinest's old firm in No. 413 Greenwich Street.

For nearly three decades the roasting kilns here had been fueled by smoke-belching coal.  In 1928 The Tea & Coffee Trade Journal announced that Morrison & Boinest had finally caught up with the times.  "One of the last wholesale roasting plants to employ coal fuel in New York City, has lately been torn out to make room for modern gas-fired roasters of the Jubilee Premix type.  The plant in question is that of Morrison & Boinest, situated at Greenwich and Hubert Streets."

Five years later Morrison & Boinest was gone, to be replaced, ironically, with a liquor firm.  Prohibition was officially repealed on December 5, 1933 and the Baltimore Club Distillers, Inc. was ready.  On November 17 The New York Times reported that firm had signed a long-term lease on the building.

Its occupancy would not be especially long, however.  By 1947 the Peerless Sample Card Co., Inc. and the Gander Printing Company were in the building.  The co-owners of Gander Printing were arrested on April 19 that year as part of what police called a massive "lottery ring" which took in $5 million a week.

The complex, illegal operation was based in Italy where the lotteries were drawn every Friday.  Saturday was "pay-off day," when the results were announced.  After weeks of investigation, the police had identified each of the locations where the winnings were distributed, and at 11:00 on that Saturday morning, 50 plainclothes officers "swooped down on earmarked establishments."  The article noted "In a raid on the Gander Printing Company at 413 Greenwich Street police took into custody seven men and confiscated 14,000 printed lottery results, plates and books."

In 1948 (possibly taking the space vacated by Gander Printing), Coignet Chemical Co., Inc. moved in.  Founded in the 1870's, it manufactured Coignet Gelatine, an emulsion used in photography.  It remained in the building at least through 1955, sharing space for part of that time with Stuart Aire, Inc., installers of air conditioning equipment,

The immediate neighborhood saw significant decline; yet the last decades of the 20th century saw change once again come to Tribeca.  It arrived at No. 413 Greenwich Street in the fall of 1972.  An advertisement in New York magazine on October 23 announced:

The Front Porch invites all our friends to join us at our new restaurant in the Butter and Egg District 413 Greenwich Street at the corner of Hubert Street...Meat pies and pastries for breakfast, our regular menu for lunch plus a Trucker's Special.

The "Trucker's Special" referenced the many trucking firms that still occupied the district.  A few months after the restaurant's opening New York magazine wrote "The new restaurant occupies the street-level floor of an old manufacturing plant.  The other floors are given over to a newly-equipped kitchen and bakery that produce soups, stews, breads and desserts."

A series of restaurants would follow.  In 1983 Manhattan South opened.  Eight months later, on June 15, 1984, The New York Times food critic remarked that it "lends respect to that much-abused term 'home-style cooking.'"  Manhattan South was followed by Il Mattone Brick Oven & Grill, and finally by Sweetgreen Tribeca, which is still here. 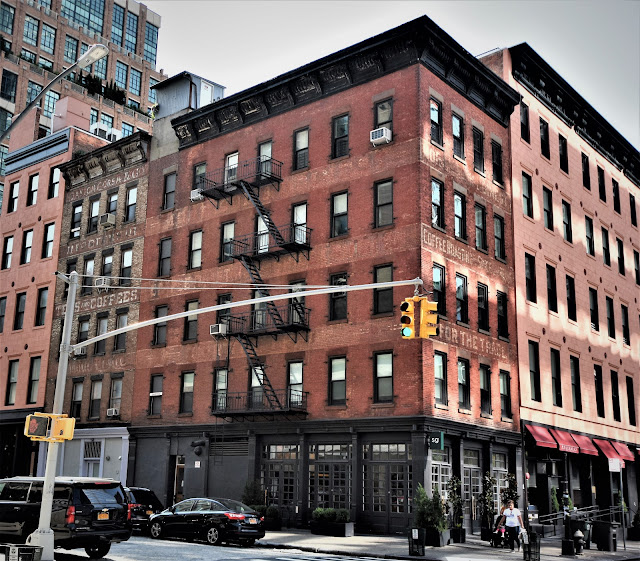 As is the case with so many Tribeca factory buildings, the upper floors are now residential, with one apartment per floor.  And, somewhat miraculously, the signage of Morrison & Boinest Co. is still legible after nearly 120 years.